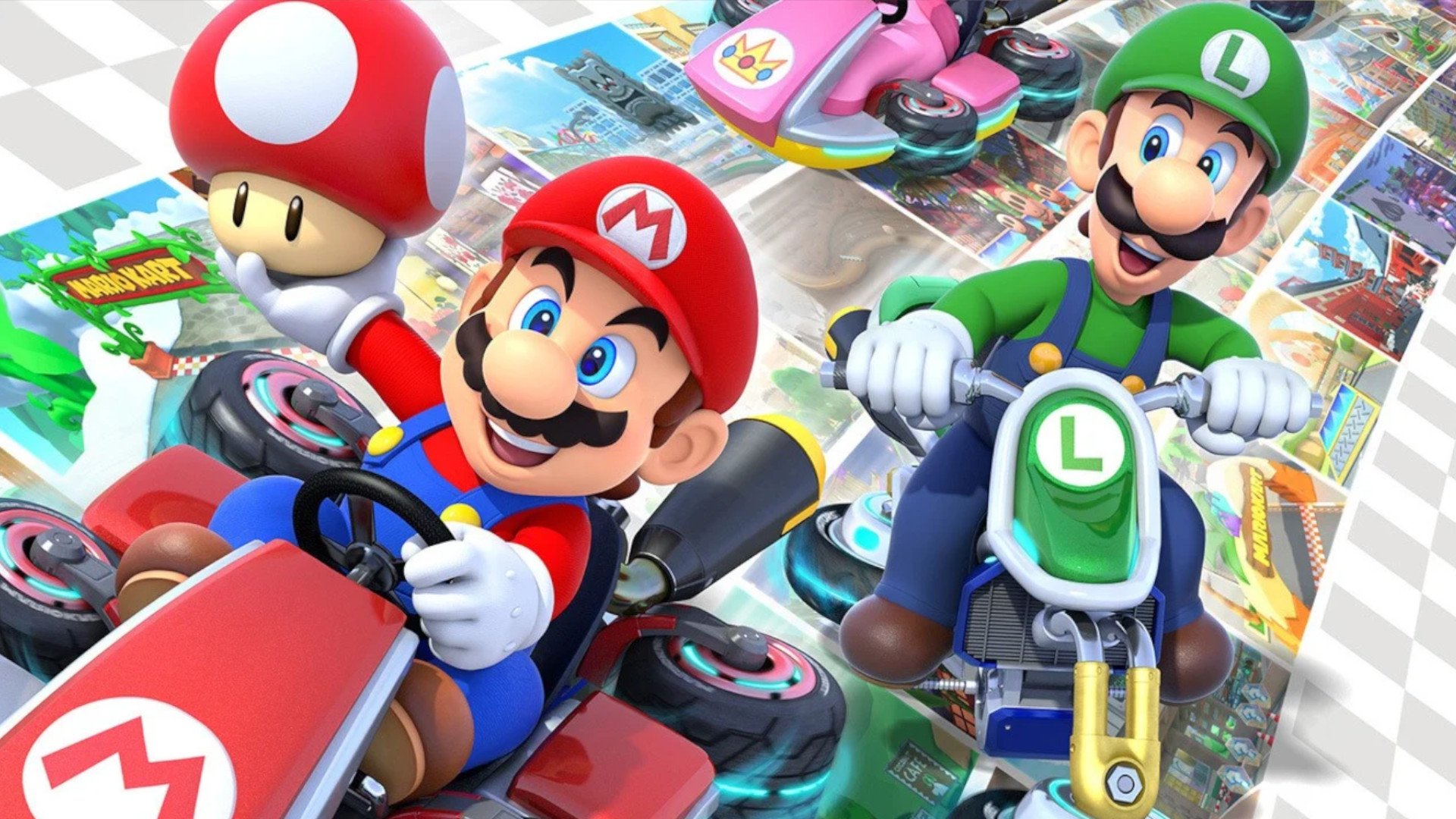 What is the best new track from Wave 1 of the Mario Kart 8 Deluxe Booster Course DLC Pass?

Wave 1 of the new Mario Kart 8 Deluxe Booster Course Pass DLC tracks have arrived, but who will win the race for the best new course? On March 18, 2022, the first wave of eight new courses for Mario Kart 8’s Deluxe-Booster Course Pass joined the roster of tracks packaged as two new 4-race sets, the Golden Dash and Lucky Cat Cups. Eight of the forthcoming forty-eight new courses are now ours to tight-turn and red shell our way on through.

While many fans were hoping for the proper announcement of a Mario Kart 9, any stalwart kart enthusiast will be delighted to get new content, and at the very least have an excuse to return to Nintendo’s best circuit. It was already known that all of the ‘new’ courses would be drawn from previous titles, but how well they would hold up next to the excellent batch of already-existing Mario Kart 8 Deluxe courses was an open question-block.

The answer is: more is more. As to be expected from a Mario Kart 8 Deluxe expansion of this proportion, these courses are very fun, ranging from serviceable additions for the game’s track lineup that add some new scenery to a few true standouts.

Without digging too deep, it should be said that these tracks feel a bit like bonus content. Simply put, they do not match the heights or polish of the original MK8 DLC that included the likes of Excitebike Arena and Hyrule Circuit. Most of the newest DLC courses, when placed next to everything from Mario Kart 8 and even Deluxe’s extra content, look like a bit of a visual downgrade, and many of them are rather short. Short does not always mean bad, but if you’re a seasoned vet, you’ll feel it. Moreover, none of them have been given anti-gravity or underwater adjustments, which in a way is a fun return to the series roots, but is worth noting.

That said, if you love Mario Kart, you want more, and all of the new tracks are good fun, and a few are amazing. But which of the new eight are the finest rides? Goomba Stomp is here to take a blue shell to the back to find out for you.

A 3Ds mainstay, Toad Circuit foreshadows MK8’s Mario Circuit, and like its plumber-brother, it’s a fine little ride, but you may want to steer into Mario for the full race. It’s hard not to smile when greeted by a giant floating Toad, but there’s not a lot else in Toad Circuit.

Toad Circuit is, if driven properly, basically one long power slide, and that can be a good time. But more than any other course in the bunch, Toad Circuit really feels short.

While it leaves a lot of room to make purple sparks fly off your wheels, Toad Circuit is also a course where you can really sense the lack of visual polish that went into this batch (that grass sure is green). But as a testament to how enjoyable any and all Mario Kart courses are, it’s still amusing.

Tokyo Blur is one of the three courses pulled from mobile’s Mario Kart Tour, and it is the least successful. Many fans feared that using the mobile courses as source material would mean that an over-simplified experience would be the result, but Tokyo is the only of that batch to really live up to this kart concern.

Both Tokyo and Paris draw from the real world, and in a surprise twist, that very idea is a most welcome turn for the series. Tokyo’s opening visual sweep is enticing, but the track feels like something of a missed opportunity.

It, too, is short, which isn’t necessarily a bad thing, but the basic turns wind you through the Tokyo streets with few surprises (particularly after you’ve already thrilled through Paris).

The second lap adds some welcome variety and some thwomps, but they almost feel like they’re there to make up for the lackluster approach to the overall design. And the third lap raises you up to the highways in what could have been a fun surprise, but again feels like still more basic turns to the quick finish. The highway is what saves it from last place on the list, but it’s a close call.

That said, the idea of real-world locations is a most welcome surprise for a series so grounded in Nintendo-based realms, and more of that to come is an exciting prospect.

Finding Choco Mountain this low on the list actually bodes well for this pack of DLC, because Choco Moutain is absolutely enjoyable.

Originally found on the N64, Choco Mountain is fondly remembered, and laid some of the foundation for the wonderful modern fan-favorite, the Wii’s Wario’s Gold Mine.

Choco Mountain is another simple course, but in this instance, less is more, as what’s in this compact track works well. A solid little cave run, a big jump, and an awesome mountain-slide opportunity for epic power slides against the risk of falling rocks amount to a big brown ride that finishes off with a run of exciting little hills to trick off of.

Many of the new courses have slight tweaks to them, either from their pass through the mobile version or in consideration of making them feel right for the Switch, but for some reason, Choco Mountain feels like it got a little too truncated and lost a bit of its N64 verve.

While all of the updated tracks have a slight buff on them to make them feel at home on the Switch, as mentioned none of them feel quite as sparkly as their native Mario Kart 8 counterparts. In most cases, these simplified visuals feel decently tuned to the experience, but Choco Mountain loses a few more points for feeling a little bland and brown compared to the rest of the bunch.

Sky Garden is quickly identifiable as the diminutive cousin to MK8’s Cloudtop Cruise. Like Toad Circuit before it, Sky Garden feels very short, almost to the point that you wish for a fourth lap, but Sky Garden’s cloud ride manages to shine a bit more brightly.

Sky Garden benefits most from some really nice turns that simply feel great to nail. An under-examined aspect of the simpler courses is how fun they can be when cranked up to 200cc, and none of the new batch feel more fun to race through at top speed than Sky Garden.

None of the newly remastered courses dig as deeply as those that appeared previously on Mario Kart in adding new anti-gravity or underwater sections, and frankly, that’s fine, sometimes a straight race is just the thing. But Sky Garden just doesn’t have a lot going on outside of its sweet little leaf jump, and some extra design would have been most welcome here.

Rounding out the middle of the pack is the DS’s Mushroom Ridge, a mixed bag if ever there was one.

Mushroom Ridge is an interesting little track. It is filled with challenging turns, and traffic that evokes the N64’s perennially updated Toad’s Turnpike.

In stark contrast to Sky Garden, the unforgiving turns of Mushroom Ridge are not recommended for 200cc racers. This feels particularly true in light of the fact that many of the turns are blind, and you can’t see the unpredictable cars that you’re careening towards.

That said, when you really get going on this course, it can feel great. It typifies that funky zone of hitting a kind of Mario Kart zen state where, when you’re flying on all cylinders, you’re power-sliding around and through traffic like a three-star champ.

This trip to the mall has aged well. Originally found on the Wii, Coconut Mall has no real analogue in modern tracks, so ends up feeling fresh and most welcome in the mix.

Riding through the colorful corridors of Coconut Mall conjures the sunshine of Delfino Plaza, which is to say it conjures miles of smiles. Peppered with fun alternate routes and shortcuts, the track shifts between a tight interior and then opens up into a wacky finale.

And even though in this iteration the Shy Guys are inexplicably parked as opposed to driving, we’re always happy to see them.

Coconut Mall gets a special boost for its perfect music. The bouncing track pairs perfectly with the hyper-color visuals of the world’s most dangerous mall. All that is left is to decide whether or not it’s faster to cut through the Food Court.

Ninja Hideaway is a unique course among this mix, playing with verticality in ways that really no previous course ever has. It’s a winding romp of alternate pathways that can send you soaring over a WarioWare-inspired pagoda or burrowing through its sewers.

Like the course’s titular ninja, the track is deceptive, and sometimes you don’t know which route is best. But the breadth of interesting variety makes each playthrough unique and leaves you wanting to explore in a way that few courses have ever accomplished.

Ninja Hideaway also looks good. While likely benefiting from simply being one of the newest offerings, the backgrounds feel more at home in the world of Mario Kart 8. Though the conspicuous lack of Mario’s canonical Ninjis is inexplicable, we are once again delighted to see the shy guys any day of the week.

In its bones, Paris just has a great feel. The excellent turns complemented by a few clever alternate routes are a joy to race, and also hold up in 200cc. But then Paris flips its script, and in its third lap, it reverses itself.

This feels like a mini-Mario Kart breakthrough, almost conjuring the excitement of the legendary Mount Wario. Many Kart enthusiasts have lived their lives in fear of the Mirror runs, but here it’s cooked in and feels incredible.

Paris also looks great. Like Tokyo before it, it draws from the real world, but Paris embraces the opportunity and you really feel like you’re racing through the back alleys of this grand capital. All of which is backed up by another soundtrack so charming that you half expect Amelie to throw a banana peel at you.

Paris feels fresh and hopefully shows shades of tracks to come, demonstrating how fun a tightly tuned course can be, and how it can become even more interesting with a simple twist.

All told, these eight new courses bode well for the Mario Kart DLC to come and are already worth the price of admission. While sometimes simplistic and certainly a visual downgrade, they are, like all Mario Kart before them, incredibly fun.

All images were taken from the writer’s own Kart rides.