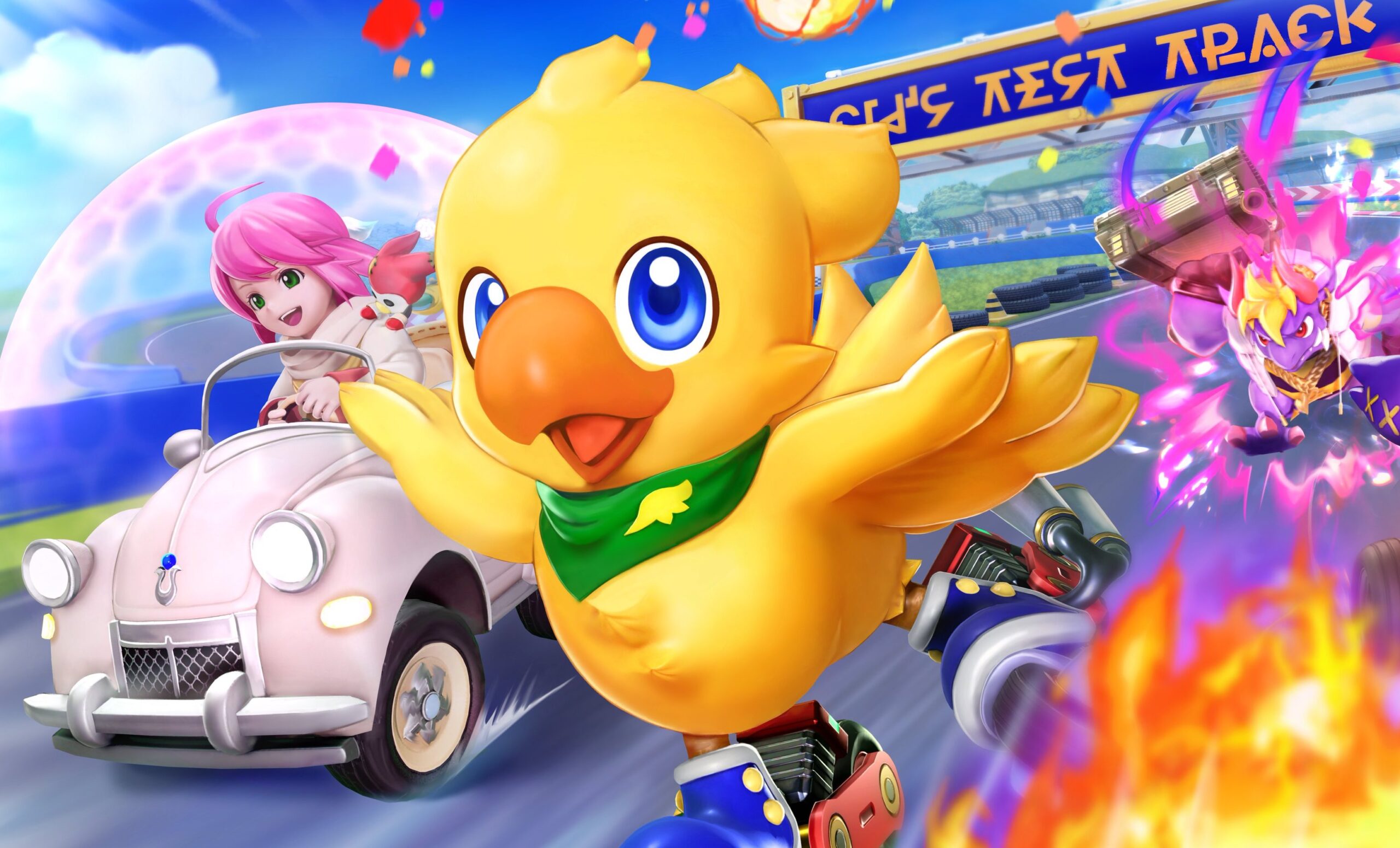 Well over a decade ago, Final Fantasy’s obscure PlayStation 1 kart racer spinoff Chocobo Racing was supposed to receive a revival on the Nintendo 3DS. Sent to a farm upstate for unknown reasons after its announcement, the iconic bird and its buddies never got their comeback as Square Enix quietly silenced the adorable project before acknowledging its inevitable cancelation. Back and only somewhat ready to return to the tracks, Chocobo GP may accelerate at times through a genre that has continually suffered from a lack of creativity and quality, but the game ultimately fails to live up to expectations. Between unrefined gameplay elements and awful microtransactions, Chocobo GP will ruffle any racer’s feathers even if it can provide some minimal smiles and enjoyment.

A Race of Reluctance

On first impressions, Chocobo GP seemingly has it all; fun gameplay, colorful graphics, a quirky cast of iconic characters (at least for Final Fantasy fans), and tracks that are short but lead to quick-fire rounds appropriate for the Nintendo Switch’s hybrid format. It may not uphold the same production quality as its biggest competitor Mario Kart 8 Deluxe but Chocobo GP looks like it can hold its own place against the red plumber’s competitors–at least on the surface. Sadly, the experience quickly comes crashing down as players exit the game’s tutorial and sink their teeth into what the lackluster revival has to offer.

Like other games in its genre, tracks and characters are nowhere near where Chocobo GP’s issues lie–in fact, the game’s presentation and atmosphere are the most notable aspects of this budget kart racer. Where Chocobo GP will frustrate players is in how its kart controls feel, the overall lack of content, a less-than-stellar campaign, and microtransactions galore. For what should have been such an easy game to put together, Chocobo GP arguably falls victim to far more problems than what its 1999 predecessor faced.

Gameplay-wise, Chocobo GP contains what your average kart racer needs. A is to accelerate, the right bumper is to drift and jump on speed boosts, and the left bumper can activate spells the player picks up through item eggs–the game is more or less a copy and reskin of what Mario Kart established. The only addition here is special skills that can be awkwardly activated with the Y button. In contrast to Mario Kart’s more lenient approach that allows casual players to earn a victory without expert skills, Chocobo GP has players constantly focused on mastering the game’s drifting mechanics. While each character does have their statistical benefits (weight, acceleration, speed, etc.), the game is for the most part concentrated on perfect drift timings and boosts above all else.

Overall the gameplay of Chocobo GP is flawed, albeit serviceable–and even fixable, for that matter, if Square Enix chooses to patch the game up in future updates. There is nothing inherently broken or frustrating about Chocobo GP’s core gameplay foundation, but players will certainly yearn for an extra coat of polish that the best of the kart racing genre flaunts. Whereas drifting and pulling off jumps can feel great, a tactile feeling of driving itself can sometimes be missing. Chocobo GP’s biggest gameplay problems are that some racers can come off as a bit too floaty and a few items can add a slight sense of tipped scales–the former of which mostly derives from how each character looks as they drive.

Aside from a few spells that noticeably feel tacted on for a sense of randomness rather than strategy, the game is a rather fair and fun grand prix that relies on skill. Best of all, Chocobo GP feels a lot faster than what the trailers present it as. Chocobo GP generally pleases in gameplay but once the gang exits the racetracks the nightmares begin. In terms of content, Chocobo GP has so little to offer. Square Enix plans to expand upon the game in future “seasons” with additional content, but what the game currently provides feels underwhelming at best.

Chocobo GP has very few multiplayer options to play with–the game only has a local multiplayer, time attack mode, and online tournament brackets (which are far less sophisticated than they appear to be). Due to the game only containing seven maps and a handful of characters, Chocobo GP is in dire need of options that can give players a sense of variety. The game has quite literally nothing that aims to reinvent its own multiplayer like Mario Kart’s battle modes. Multiplayer modes featuring no items or different speeds would even be enough to mix up the current landscape. At the very least, the online (in my experience) never contained game-breaking lag spikes or crashed once. Chocobo GP’s online was almost always smooth sailing.

Outside of the multiplayer component players are given a single-player campaign that contains a narrative, dialogue, voice acting, and cutscenes. While that all may sound swell, the entire mode comes off as being flat and superfluous. If it were not for the progression system in place, every Chocobo GP player would be skipping out on this barrage of lonely solo races. The characters are the highlight of the story, but that is not because of their tales or personalities even if there are a few moments to spotlight. Designs have always been the Final Fantasy franchise’s strong suit and the same can be said for Chocobo’s GP.

Above bland and effortless cutscenes full of dialogue slogs are the characters and atmospheres Final Fantasy fans want. If it were not for its Final Fantasy branding, Chocobo GP would likely be labeled under a category of kart racers to ignore. The overall graphics are colorful, clean, and clearly show a legitimate love for the long-standing role-playing franchise. In terms of animation, Chocobo GP’s personality can show its occasional shortcomings yet each racer still has a lot of personality in their victory animations and unlockable costumes. Like Mario Kart 8, Chocobo GP’s soundtrack is also a significant part of the game’s heart and soul–its an absolute bop.

Even if you plan on skipping out on the game you should still give its soundtrack a listen–it really does deserve a moment from your ears. The only shameful aspect of the music design is how it strangely lacks any dynamic approach to coincide with the races. A final lap rendition of each song could have really helped add some tenseness to the closing lap of each race.

Everything though for Chocobo GP truly comes crashing down with one aspect of the game: the predatory microtransactions. The vast majority of Chocobo GP’s content is locked behind grinds and in-game purchases. Once again, this is yet another game with an unnecessary gacha-like system running on one too many currencies. In Chocobo GP there are three currencies: Gil, Mythril (which can expire in a given timeframe), and regular tickets. All of these can be obtained in-game, yet they take up a ridiculous amount of time to collect–as much as you could imagine from this type of questionable microtransaction scam. On top of that though, there are also multiple Prize Passes players can purchase too. If Chocobo Racing was a free-to-play mobile game perhaps these standards would be able to slide by, but for a premium-priced Switch game, it is absolutely unacceptable.

Chocobo GP has exactly what it needs to be a coherent modern kart racer but Square Enix has created only a foundation of teases for Final Fantasy’s iconic bird and its buddies that quickly tries to cash in on interested players. The adorable characters, bouncy score, and engaging gameplay are not enough to save the game from spinning out of control as it rapidly opens its airbags before showing all of its flaws. With Mario Kart 8 Deluxe’s DLC just days away, Chocobo GP will have to make a strong fight if it wants to stay alive against the highest selling game in its genre–the game will seriously need an entire revitalization to survive. Perhaps with a few updates, Chocobo GP could reach greater heights but as it stands it will more than likely just end up another forgotten Mario Kart competitor part of a notable franchise.