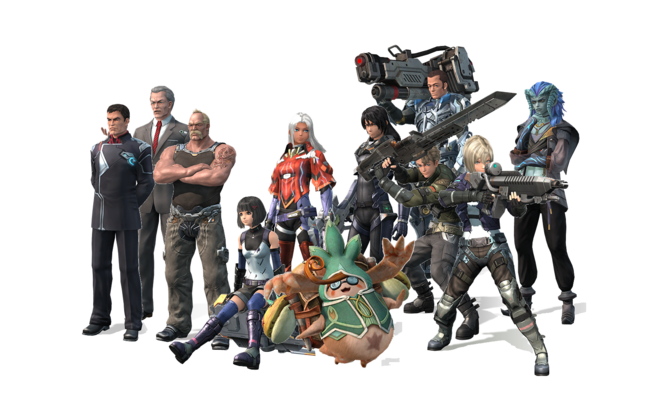 Nintendo consoles have been homes to some of the most memorable video game characters of all time. Naturally, the company itself is largely responsible for a major portion of them, dreaming up potential classic mascots at a rate on par with Disney, but other developers have pitched in their fare share as well. 2015 brought several noteworthy new personalities into the mix. Time will tell if any of these achieve the noteworthy success of a Mario, Kirby, or even a Chibi-Robo, but these are the best characters we saw this year:

The active turn-based strategy game Codename: STEAM has players guiding a team made up of the protagonists from famous works of literature including Henry Fleming from The Red Badge of Courage, John Henry, the American folk hero, Peter Pan, Tom Sawyer and even Abraham Lincoln, who faked his own death to retire from the Presidency of the United States so that he could deal with the real threat: a secret alien invasion. But of all the agents in the 3DS title, perhaps the fan favourite is Queequeg, inspired by the South Sea chieftain’s son from Moby-Dick who specializes in machinery, and able to launch mechanized exploding penguins. His special attack, “the Harpoon” can impale multiple enemies at once and cause heavy damage. Queequeg is one of the strongest units you can acquire early in the game, and his diverse attacks make him a valuable character to keep on the back lines. Let him stay out of danger, sending penguins out to do dirty work for him.

“Isn’t about time you gave up? That really BURNS ME UP! Or rather…it’ll BURN YOU UP! Hee hee hee! ”
—Kamek, Yoshi’s Woolly World

Bunson the Hot Dog is one of the new characters who debuts in Yoshi’s Wooly World,
the side-scrolling platformer developed by Good-Feel and starring one of Nintendo’s most beloved characters of all time. Much like Super Mario World 2: Yoshi’s Island, Wooly World also hosts over a dozen charming characters and a ton of great bosses, but Bunson is by far the best of the bunch. The Dachshund (whose name is a reference to Robert Bunsen, inventor of the Bunsen burner), first appears as a normal Hot Dog, but after being altered by Kamek’s magic, he grows into gigantic proportions while his body explodes in flames. He is the main boss of World 2, and like Big Bungee Piranha, his weak spot is his tongue.

One of the most interesting aspects of Nintendo’s 2015 hit Splatoon is your character’s ability to transform into a squid, making it possible to stealthily swim through your ink until it’s time to pop up and splatter someone. The Squid Kids are interesting enough, but the most memorable character in the game is perhaps Cap’n Cuttlefish, an elderly Inkling who acts as a guide for the protagonist (the player’s Inkling) in Hero Mode. Cap’n Cuttlefish is described as “a decorated hero who fought in the Great Turf Wars of legend between the Inklings and Octarians. He now keeps solemn vigil over Octo Valley, watching for any fishy behavior. Though his clothes may be tattered, his heart is pure and nothing escapes his razor-sharp gaze”. Nintendo’s take on the third-person shooter is refreshingly original, and with a colorful cast of characters such as Cuttlefish, we’ll most likely see a sequel sometime in the near future.

At first glance, The Adventures of Pip seems like another 2D, side-scrolling, adventure game; however, this delightfully postmodern fairy tale, is a deft, intelligent action platformer that takes the age-old damsel-in-distress story and makes it fresh. You play as Pip, a one-pixel hero in the world full of 32-bit characters, and the only one brave enough to rescue the princess kidnapped by the Skeleton Queen and her minions. The Bit Stream is the life force that fuels the Pixel Kingdom and the twist that makes Pip a beautiful tribute to the 8-bit, 16-bit and 32-bit era that used to be. While our protagonist begins as a single pixel, he quickly gains the unique ability to evolve into three different forms. There are many games out there that go for that retro aesthetic, but what sets Pip apart is how players must skillfully switch back-and-forth between these three forms in order to pass every roadblock, and defeat every enemy along the way. Pip is the closest we’ve come to having a character like Shovel Knight that takes inspiration from past video games while creating his own unique adventure and lore.

Is he animal, mineral or vegetable? Whatever the case, there’s no question that Mira native Tatsu is delicious taste of welcome comic relief in the otherwise melodramatic alien world of Xenoblade Chronicles X. Providing a much-needed venting outlet for his BLADE teammates, who are constantly under the stress of restarting the entire human civilization, his unwavering optimism in spite of his general uselessness (other than loaning players the Follow Ball) is truly an inspiration for all the residents of New L.A. And where else but in this ragtag group of human survivors would such a weird little onion-shaped misfit with x-ray specs and furry wings for arms fit in? In fact, he may run the gamut of human emotion more so than any Homo sapien that makes an appearance. Tatsu laughs, whines, dances, grumbles, and falls for Lin’s constant threats to cook him into an entrée every time. Their interactions are among the liveliest in the game, bringing levity and a reminder that fun can still be had in the face of extinction. There’s a lesson in there somewhere, but Tatsu is probably oblivious. Tatsu just wants to help, and somehow, hilariously thinks he can.

With indie games gaining popularity over recent years, larger studios have been branching out with smaller games as a way to test out new ideas on a small budget. Boxboy is one of those games and comes from the clever team over at HAL Laboratory, who’ve created some of Nintendo’s most memorable characters, including Ness, Lucas, King Dedede and Kirby, to name just a few. Boxboy is essentially a throwback to the puzzle platformers that were released on the original Gameboy, and has a very simple premise in which you guide the protagonist through different worlds in order to restore his homeworld after it’s been hit by a meteor. Boxboy is a breath of fresh air, and proves that no matter the size or style of game, HAL is always committed to delivering great game characters with tons of personality. In Boxboy, you play as Qbby, a cute little square with two dots for eyes and a pair of stick legs. He walks, he jumps, and has cloning abilities that create platforms, allowing him to reach higher ground, or sprout out of his body to keep buttons pressed and doors open. Qbby’s squares can also be used as shields to protect him from lasers, and by extending the squares from his body, then retracting them back into himself, a hook-shaped formation may be utilized to grapple and climb ledges. In addition, after completing each stage players are awarded currency, which can be spent in the shop on Qbby costumes, music tracks, tip manuals, and a series of Time Attack or Score Attack stages. Qbby looks adorable enough when he first appears as a simple block, but once you start dressing him up in shades, devil horns and bunny costumes, you’ll quickly fall in love with HAL’s latest pixelated star. Boxboy is an excellent puzzle platformer and a great addition to the HAL library of games, and Qbby is the best new character introduced to us on a Nintendo platform in 2015.