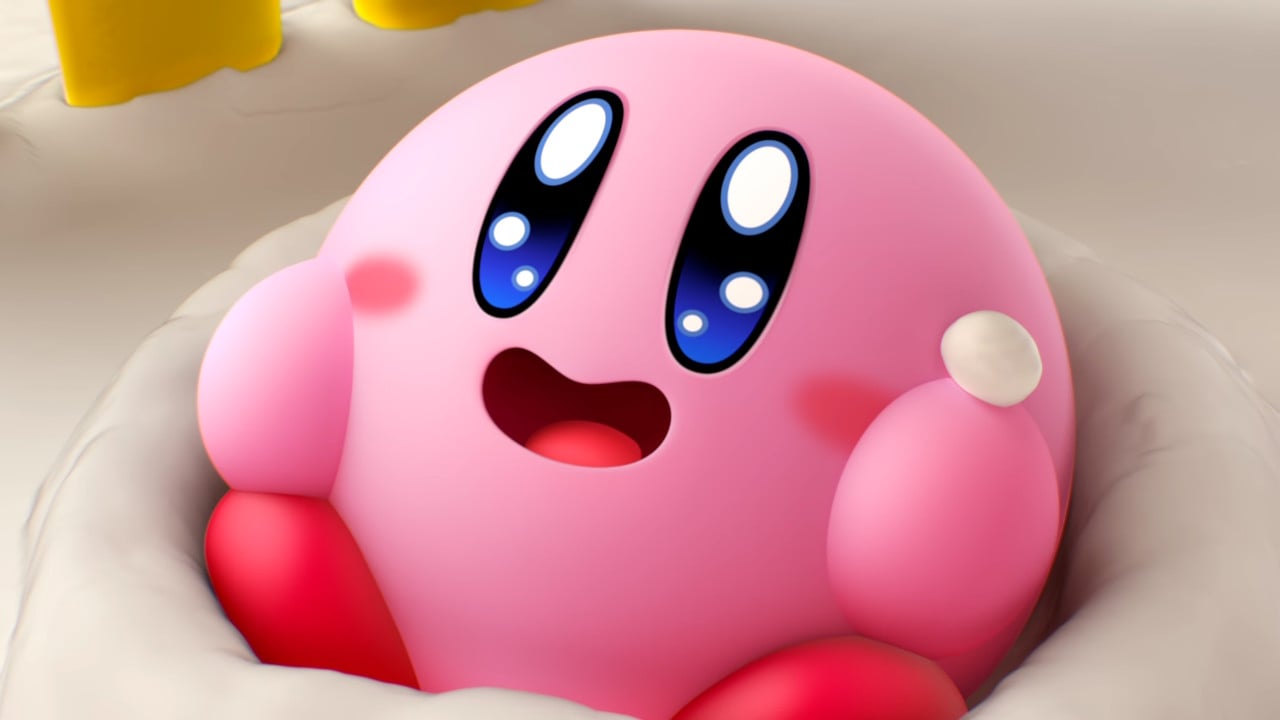 How does HAL Laboratory continue Kirby’s big 30th anniversary after a well-received mainline game, plenty of adorable merchandise, and a star-studded live concert? The only answer for Nintendo’s pink hero would be some delicious dessert-sized competitive action, stuffed with even more celebratory content.

The Nintendo Switch and Nintendo 3DS have been no strangers to Kirby spin-off games. Since Kirby: Triple Deluxe, HAL Laboratory has been releasing small digital supplements shortly after each major release in the franchise. Kirby’s Dream Buffet continues to roll with Kirby and the Forgotten Land’s inventive new direction for the series as Dream Land’s beloved mascot succeeds at throwing a multiplayer competition sizable enough for his insatiable appetite.

Kirby’s Dream Buffet is the perfect sweet source to follow up HAL Laboratory’s first fully realized 3D effort with their friend-shaped hero. Whether you are looking to play one of Kirby’s best spin-offs or the next big Nintendo Switch multiplayer title, Dream Buffet is a deliciously good time.

The Strawberry on Top

In Kirby’s Dream Buffet, the innocent pink puff has been miniaturized by the magical Dream Fork after attempting to take one big bite into a lovely strawberry cake. With his go-lucky attitude intact thanks to the presence of delectable treats, Kirby is joined by other variations of himself to compete in some strawberry munching races, mini-games, and battles. Throughout this four-player competition, the player’s goal is to eat as many of the star warrior’s favorite berries as possible to become the biggest Kirby of the lot.

In contrast to the Game Boy’s Kirby Tilt ‘n’ Tumble and its inspired mini-game in Kirby and the Forgotten Land, the player in Dream Buffet has total control over Kirby himself, rather than the environment. Gaining momentum, hopping through obstacles, and utilizing abilities that can be picked up through boxes with utensil icons is the only way to reach the largest strawberry cake first and be the greatest glutton during each race’s battle royale aftermath.

On the surface, the gameplay may make it seem like the first Kirby to the finish line has the highest victory margin, but this is thankfully far from the truth. Kirby’s Dream Buffet is an intense game of strategy masked under Planet Popstar’s adorable esthetics. Dream Buffet offers a well-balanced experience that hearkens back to the simplistic yet competitive days of Air Ride and Dream Course. Any Kirby can take home a victory as long as the player puts in the effort, but those who truly take their time to master the game’s mechanics will be placed on another level. Each match asks players to be strategic with their methods of racing through the creamy landscapes and playing it safe when entering a mini-game and battle royale.

Similar to Kirby: Air Ride, using the Copy Food items at the right time and learning Kirby’s movement is crucial to collecting the most strawberries and achieving victory. Kirby’s Dream Buffet follows a simple structure of placing players through four trials in its core game mode: the player will go through a race, a collectathon-esque minigame, another race, and finally an epic battle for dominance. Whether you are using a wheel to knock out every player in your path on a small arena or slipping through breakable walls as a goop of jelly during the race, the player has to think hard before they act across each of the three games if they want to use their Copy Foods to their maximum potential.

In the same kitchen as where a perfect cake would be cooked, using your available tools correctly won’t just get the job done. The player has to watch Kirby’s speed and weight closely as they learn to juggle between looking out for the best areas to nab strawberries and using Copy Foods. Getting Kirby to become larger to gain momentum and power is necessary to win. Learning to look for slopes rather than scale uphill climbs can save the player increments of time, but there is also a risk-reward system in being able to conquer the harder paths. Once again, Kirby’s Dream Buffet is a game of strategy. While the time pressure feeling adds a thrilling layer to the gameplay, bull rushing to the finish line is not the complete key to success.

While the core mechanics of the gameplay are superb, the only aspect of the multiplayer experience that feels missing is a four-player local option. Kirby’s Dream Buffet has almost everything it needs to be the perfect party game–it’s cute, incredibly fun, easy to pick up and play, matches fly by, and it has an immersive, bouncy atmosphere. Only being able to have two players locally feels like a missed opportunity. Perhaps there are technical reasons explaining why a local four-player match may not be possible for this game, but nonetheless, it’s a shame that the option is not here. At the very least, players forced to sit back and watch only two individuals partake in all the action won’t be disappointed by the game’s incredible presentation.

The look of every Kirby game has always been a highlight, and HAL Laboratory has not backed down from going all in on their newest thematic atmosphere. The game’s main setting might be a strawberry cake, but the way HAL Laboratory bends the imagination as to what foods can make obstacle courses and arena alongside their core dessert is charming. The developers have gone all out replicating foods and cooking settings with distinct looks, frostings, utensils, side dishes, and condiments to make each arena feel vastly different from the last.

Kirby’s Dream Buffet may not have an enormous number of environments, but it certainly feels like it–even after I have put over 6 hours into the game. Every racetrack, mini-game, and battle royale arena has been given the same amount of love. Whether you are fighting to be the biggest food-eating beast on a miniature barbeque or a stack of cookies shaped like characters from Kirby’s recent adventures, every piece of ceramic, strawberry pie, and fondant-covered cake layer looks delectable. If there is one aspect of the atmosphere that really shines through, it’s the adorable puffball that can swoon players along for the journey no matter what situation he is in.

The amount of customization players can use to dress their Kirby is downright lovely and will go down as one of the game’s greatest highlights. To go along with Kirby’s 30th anniversary, Dream Buffet takes a deep dive into the franchise’s history as it provides players with plenty of familiar outfits paying homage to some of the pink puff’s friends and foes. From Bandanna Dee’s headband to the Kirby Café’s fan-favorite Kirby Burger menu item, there is such a welcoming variety of colors and headpieces to choose from that help make dressing Kirby just as fun as rolling him around.

The sentiment of the character customization spreads to the player’s Home Table cake too. Throughout Kirby’s Dream Buffet, as players level up their Kirby they will be granted “Compliments of the Chef,” cookies showcasing characters and Kirby copy abilities from over the years. While these small throwback tokens do come with a limited amount of usage, Kirby fans can’t help but smile at the characters HAL Laboratory decided to feature here.

Personally though, the cherry on top of the game’s entire presentation for me is the soundtrack. Every song in Kirby’s Dream Buffet is an absolute banging joy that once again continues HAL Laboratory’s streak of incredible scores. If you love Kirby music and what the franchise has had to offer over the years, you will not be disappointed in the slightest bit by this soundtrack.

From original bouncy renditions to new iterations of classic battle themes and stages, there is so much to jam out to in Dream Buffet–the offerings here can arguably put some of the mainline games to shame. Best of all, thanks to how the unlockable system is structured, matches are constantly feeling refreshed with new tunes as the player unlocks tons of tracks as they play. Typically, Kirby soundtracks tend to lock dozens of tracks behind music players, but here, every piece is used during the gameplay.

Kirby’s Dream Buffet is a delicious dessert to help celebrate 30 years of the pink puff after the Forgotten Land took the franchise in an incredible new direction. Like its delicious and sparkly lit strawberry cake landscape, Dream Buffet is dripping with love, delight, and joy at every corner as HAL Laboratory succeeds in baking a perfect battle for their mascot. Kirby’s Dream Buffet is a multiplayer treat Kirby fans and competitive Nintendo Switch users will not want to miss out on… Now tell me, who do I have to beg for more adorable Kirby colors and costumes to collect?