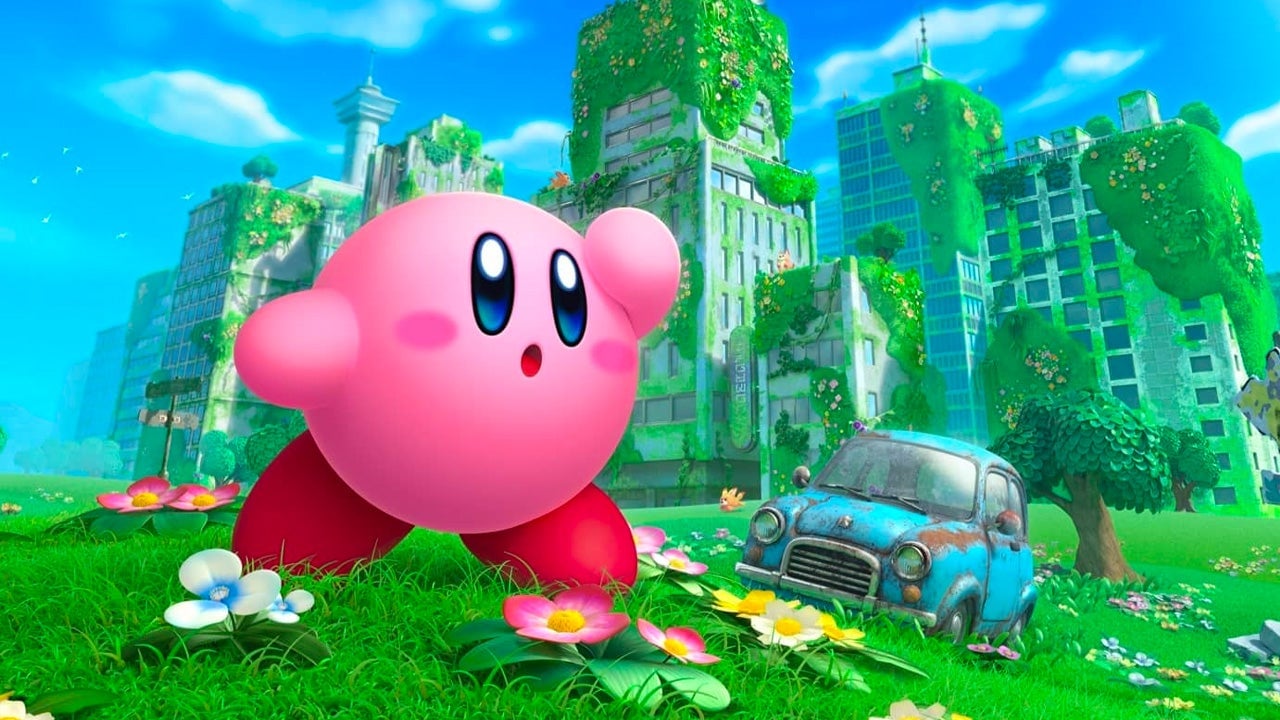 Kirby and the Forgotten Land Review

After so many iterations in the two-dimensional space, it was only a matter of time before HAL Laboratory’s mainline Kirby series jumped onto the next axis and finally revitalized the pink puff’s platforming style. Since the early Nintendo DS era, Kirby games have seen their mediums and highs as HAL Laboratory attempted to take the franchise to greater heights with more versatile locations and atmospheres. While every Kirby game features something distinct, the restrictions presented by a 2D format have kept the developers stuck in a noticeable repetition. At its core, Kirby and the Forgotten Land is your average Kirby game developed in a 3D space–and while that may not sound as profound as it should, the game masterfully utilizes every one of its new elements to create one of the friend-shaped hero’s most immersive experiences yet.

Kirby and the Forgotten Land breaks free from the shackles that have made the series feel stale for many players in recent years. Since the release of Kirby Star Allies, HAL Laboratory has paraded that they would be taking their mascot in a different direction with his next iteration–and Forgotten Land absolutely delivers on that promise. Kirby and the Forgotten Land literally takes the pink puff and his friends to a new world as a transdimensional portal sends the cast to an overgrown and deserted planet. Almost every aspect of Kirby’s game design has been completely refreshed thanks to brilliant atmospheric presentation and admirable ways of sticking to the character’s longstanding philosophies. If there was any way HAL Laboratory was going to reinvent Kirby while keeping his series norms intact, Forgotten Land is exactly it.

Beyond Many of PopStar’s Accomplishments

It bears repeating: Kirby and the Forgotten Land is more or less your average 2D Kirby game except in 3D. The Forgotten Land itself is divided into multiple worlds and levels that have players jumping, floating, and fighting as Kirby while they travel from point A to B. On their adventure, the player is tasked with finding collectibles, alternating between copy abilities to solve puzzles and conquer boss battles to venture onto their next obstacle. Where Kirby and the Forgotten Land thrives most is from its newest main mechanic, versatile and upgradable copy abilities, and world-building that is surprising for a game from HAL Laboratory–and unsurprising for long-time fans. If you are a fan of Kirby who has loved any of his previous 2D endeavors, you are in for a wonderful treat. Meanwhile, those who have grown tired of Kirby’s typical games will easily be roped in thanks to the expanded mechanics and open spaces.

For starters, copy abilities have more complex movesets this time around. The player is challenged to upgrade each ability through a collectible treasure system, blueprints, and post-game bonuses. Rather than having a concrete set of abilities players will master in one go, Forgotten Land wants to have its users thoroughly learn the ins and outs of each upgrade before mastering their next iteration. The entire system feels more rewarding than any other previous game’s copy abilities because there is a clear evolution between each upgrade. Kirby literally becomes more powerful every time the player returns to Waddle Dee Town’s blacksmith. Additionally, Kirby’s moveset now has a dodge roll that can be used to evade attacks and gain an extra hit on enemies. Together, the two additions work hand-in-hand in creating combat that never wears out and is addictively fun to explore. Players will want to replay levels and optional treasure challenges to find their favorites.

While copy abilities can be used at any given point in the game, the new Mouthful Mode is broken down into interactive segments that adhere to specific sections of a level. Mouthful Mode is essentially Kirby’s iteration of Cappy’s possessive abilities from Super Mario Odyssey; the player is able to take control of an object by having Kirby goofily form over it with his entire body. While there may only be 16 Mouthful Mode abilities in the game, each one has its own distinct properties that stay fresh from one another and are wisely built around specific scenarios. It is a shame, though, how a handful of the abilities can go a bit underutilized due to how restricted they are. In particular, the arch ability (one of my favorite abilities), definitely could have made a larger presence throughout the game. At the very least, the underused Mouthful Modes are still a blast to take hold of when players get their hands on them. Unlike some of the franchise’s other games, there is never a moment throughout Kirby and the Forgotten Land where players will be wishing they could skip out on using the mechanic.

To top it all off, Kirby and the Forgotten Land most importantly offers a pure joy to explore. Whether you are rolling around the streets as a car or making a mess with an on-foot tornado, it is hard not to want to explore every inch of the Forgotten Land. Even with a rather dark theme lingering over the game’s imaginative palettes, there is so much to smile at within its ironically living world full of invasive species and survivors. For a world that is supposed to feel abandoned, decayed, and all-around hopeless, the Forgotten Land that Kirby encounters is satisfying, comforting, small to traverse, large in terms of depth, and just wonderful to look at–even if a technical restriction comes into frame every now and again that dips an enemy’s framerate or causes some minor pop-in textures.

What a Wonderful World

Each world’s level design is condensed and effectively caters well to Kirby’s overall speed, mouthful mode, and revitalized copy abilities. Above all else, what Forgotten Land proudly flaunts most is a natural sense of world progression in terms of both its individual sandboxes and its wider story. Not only is each level’s pacing well-articulated to be an experience that never slows down, Kirby and the Forgotten Land often tells its story mostly through environmental evolution as the pink puff ventures from abandoned cities in moss, foliage, and debris to damaged landscapes that are suffering from global catastrophes like sandstorms and volcanoes. Even if the game is jumping between its usual franchise themes (grass, ice, city, fire, etc.) it always manages to stay attached to its theme of abandonment as it constantly leads the player through distinguishing set pieces and obstacles. There are even secret locations stuffed inside a handful of levels for players who attempt to exit the game’s perceived boundaries.

It can be disappointing that most of the actual narrative appears on text screens and during the game’s final mission, yet the execution feels true to Kirby’s focus. Despite featuring more narrative and lore development than meets the eye, the pink puff has never been out to tell a complex story or completely flesh out its cast over the course of its dozen-plus-hour adventure. Atmospheric development and cute characters have always been HAL Laboratory’s strong suit. Even if the narrative is not as embracive as Kirby Planet Robobot per se, Forgotten Land still provides plenty of surprising moments for players during its closing hour. Additionally–and as always with this franchise–Kirby’s latest friends and foes all adhere to rather excellent and memorable designs.

From Awoofy to Elfilin, every character introduced in Kirby and the Forgotten Land has a design and personality that will stick with players well after they complete the game. Kirby games have always been known for their expressiveness and this entry does not skimp on that regard. Every hero, ally, and enemy is bursting with emotion as HAL Laboratory dumps their usual dose of love into their latest release. The game is constantly showcasing unique animations that sometimes even coincide with locations, and Kirby has even been given interactive taunts that can be used to sit anywhere and say hi to anyone. Best of all, though, this sentiment heavily extends into the boss battles.

Aside from banger soundtracks, Kirby games have always held boss battles on a high pedestal–they are without a doubt one of the franchise’s most memorable aspects. One after the other, the boss fights throughout Forgotten Land grow more complicated and thrilling. From a new boar-inspired iteration of King Dedede to Sillydillo who is a rampaging armadillo with a handcrafted partner, each boss is bursting through the seams with character. There is never a battle that feels like a step back from the last.

Up until the credits, Kirby and the Forgotten Land constantly pleases. Afterward, however, players are left in a lightly underwhelming position as the amount of content begins to dwindle–at least in comparison to other Kirby games. Players will be preoccupied with only a handful of short sub-games to play both during and after they comb the campaign for every collectible. After the main story reaches its conclusion, though, the majority of Kirby and the Forgotten Land’s thrills slow down for a substantial albeit slightly disappointing post-game world. All of it is still worth going through, but when compared to its predecessors it is hardly satisfying.

In previous Kirby games, the post-game has always been one of the most exciting aspects to look forward to–sometimes even more so than the main adventure. In Kirby and the Forgotten Land, players are only given a few extra levels to explore, two more bosses, one more additional Colosseum boss rush challenge, and two more copy ability upgrades. While that may sound like a lot, in hindsight, the post-game is rather lacking. There are no modes that allow you to play as Meta Knight or King Dedede, or special extra adventure modes that offer more ways of utilizing the game’s features. While the post-game is definitely worthwhile, it is a shame how short it can be as it mostly plays out as a “best of” package that combines many of the game’s individual world levels. The more intense “Forgo” versions of each boss battle are appreciated, but again, it’s hard to not feel as if there could be more original content after the first credits roll.

At the very least, the post-game does show off one core idea that Kirby and the Forgotten Land upholds from beginning to end: consistency. The Waddle Dee Town hub world is never abandoned and there aren’t multiple menus to fiddle with before jumping into the action. Kirby and the Forgotten Land is a seamless experience that celebrates being able to throw players in and out of what they want–and perhaps that is just what matters most. Despite its flaws and technical oversights, Kirby and the Forgotten Land sets the stage for another promising era of the pink puff. The game only awes and draws as it continually dips its toes into new ideas for the series with ease that will keep all players hooked.

Kirby fans have eagerly been awaiting the pink hero’s true jump into the three-dimensional future for years now. Kirby and the Forgotten Land is without a doubt not only one of the best games the series has put out in recent years but an absolute triumph for HAL Laboratory as Nintendo’s second-party developer takes their endeavors in Dream Land to a new world. If this is just HAL Laboratory’s first attempt at making a 3D Kirby game, then the future of the series is looking brighter than Planet PopStar.