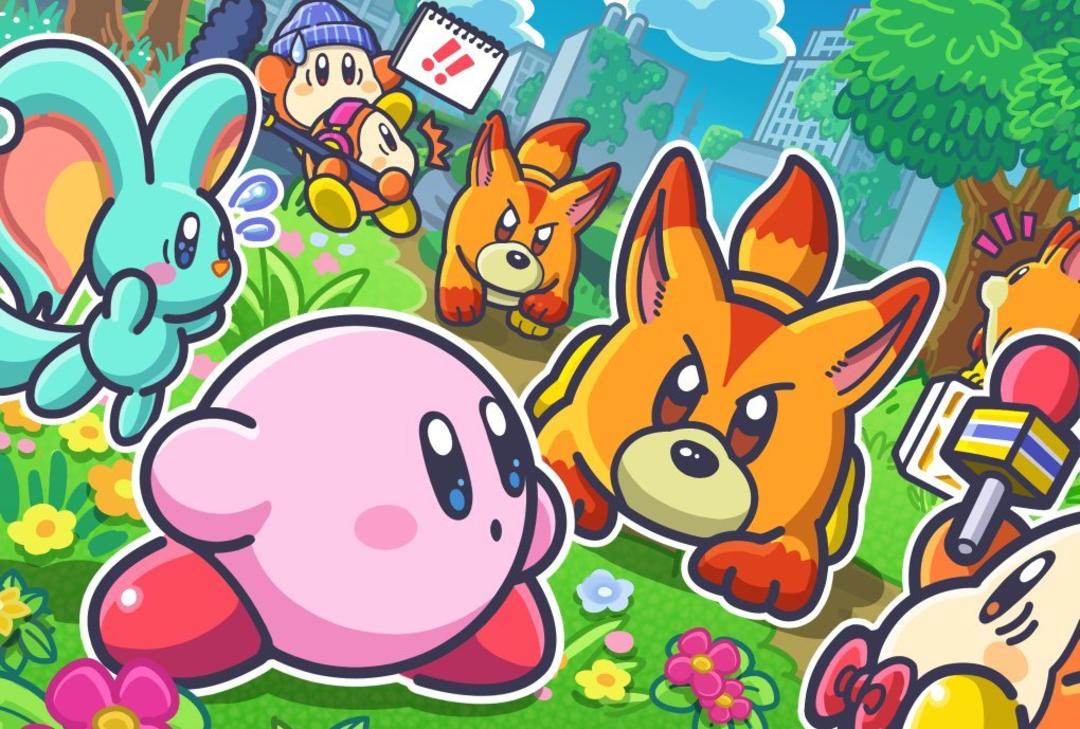 The Best Details, References, and Easter Eggs from Kirby and the Forgotten Land

After the easter egg palooza that was Kirby Star Allies, HAL Laboratory has taken a step back with Kirby and the Forgotten Land to create a new world far from the reaches of Dream Land. Ditching PopStar to explore an abandoned planet lost to time, the latest entry in the series is still littered with plenty of nifty callbacks and secrets as the pink puff ventures off to defeat the adorable, dipsy, and dangerous Beast Pack. These are just a handful of the best details, references, and easter eggs that can be found throughout Kirby and the Forgotten Land!

In Kirby and the Forgotten Land, Meta Knight continues to use his signature sword, Galaxia–or rather “Meta Knight’s Sword” as HAL Laboratory has oddly decided to rename it once again for this entry. However, players who manage to disarm the skilled swordsman during his boss battle by engaging in a quick time event can corner Meta Knight into utilizing a different weapon for the remainder of the dual. Like how players can steal King Dedede’s hammer after the royal nemesis ditches his trusty weapon for a pillar and his bare hands, once Meta Knight falls over and drops Galaxia the player can quickly suck in the blade to gain the sword copy ability.

Without his signature weapon, Meta Knight will bail from the arena’s battleground for a few seconds to grab another sword. While the weapon seemingly looks like an ordinary sword on the surface, this blade actually originates from Meta Knight’s first-ever appearance in the franchise. Before he used Galaxia, Meta Knight had a sword similar to that of Kirby’s copy ability when he debuted in Kirby’s Adventure for the Nintendo Entertainment System. Unlike the majority of Kirby’s other cast members, Meta Knight’s design had a complete overhaul when he returned in Kirby Super Star for the Super Nintendo. Even if his original crimson red cape and violet mask have not been referenced in years, it is nostalgic to see at least one aspect of the character’s first design return in a newer Kirby entry–even if it’s an easter egg most players will probably fail to encounter!

The Game’s Fictional Language Can Be Translated

Kirby and the Forgotten Land’s new world utilizes a fictional language within its bygone locations. Almost every level in the game contains a signpost or building with text that seems like gibberish, however, in the same vein as some of Nintendo’s other big franchises like The Legend of Zelda, the language can be entirely translated with enough patience. While fans spent hours pre-launch attempting to decipher what every letter possibly correlated to in English, Kirby and the Forgotten Land’s title cutscene featuring the Mouthful Mode “Carby” ability immediately reveals its translations through the song’s second line of subtitles. In every version of Kirby and the Forgotten Land, below the player’s native chosen language will be the game’s fictional one. Using the chart above created by Obscure Kirby Media and Facts’ on Twitter, you can now translate the game’s text to your heart’s desire!

Have you ever wanted to sit down next to a sleeping Awoofy or say hi to the local Waddle Dees in Waddle Dee Town? How about doge roll away from enemy attacks like a FromSoftware game? Well, you can do all three of those in Kirby and the Forgotten Land! While the game never directly tells you about these actions, the d-pad and standard defense button contain secret actions players would only find by experimenting with the control scheme. To wave and yell “Hi!”, click the “up” input on a controller with a d-pad. To sit down and take in the atmosphere, click down. When you have time during the post-game try and say hello to some of your buddies around Waddle Dee Town for some surprise animations!

More importantly though, the pink puff now has a dodge roll that can be used by holding down the right shoulder button and moving the analog stick in any direction. While the game may never tell the player about this incredible move, it definitely puts Kirby’s competitors to shame. Not every copy ability notably has access to this technique (some abilities create sturdier shields), but those that do allows players to send Kirby rolling forward, backward, or sideways to avoid incoming attacks. Successful dodges can result in time slowing down and some copy abilities have follow-up counterattacks. Be sure to use this move to conquer those no-damage boss runs!

Kirby and the Forgotten Land certainly strays from using some of the franchise’s most iconic elements. Many of Kirby’s beloved friends and foes are absent in the Forgotten Land along with Planet PopStar’s array of locations. Longtime fans of Kirby though will be happy to know that some of the franchise’s musical motifs are indeed sprinkled throughout the latest game–a few but they are there and as recognizable as ever! Returning for seemingly what has been every Kirby game to ever be released, the theme of Green Greens may not be present during a level, but it is housed within a special location. The theme of Kirby’s House is a brand new rendition of the Green Greens motif! It wouldn’t be a Kirby game if what is often considered the franchise’s main musical score wasn’t present in some form.

HAL Rooms Are Back

Like Green Greens, another staple to the mainline Kirby series is HAL Rooms. Honoring the Kirby developer’s name HAL Laboratory, HAL Rooms are secret areas that can be found through either a hidden door, hitting a switch, or firing at a discrete target. In Kirby and the Forgotten Land, there are HAL Rooms located in the Natural Plains, Wondaria Remains, and Redgar Forbidden Lands that are each stuffed with Star Coins, Gacha Capsules, and Treasures to collect.

At the end of the level “Rocky Rollin’ Road” in the Natural Plains, fire at the flying target with the ranger copy ability before collecting the imprisoned Waddle Dees. Upon successfully hitting the target, a massive staircase made of blocks will appear out of thin air which will allow you to scale the building from toward the beginning of the level. Jumping off the backside of the building after reaching the top will bring you to the game’s first HAL Room.

While you can nab a hidden Waddle Dee by crossing the finish line in less than five seconds in the Carby Mouthful Mode section of “The Wondaria Dream Parade”, players who wait to pass the timer when it hits 86 seconds will activate a platform to rise from the chasm. That platform will reveal that the challenge room is also doubling down as a hidden HAL Room. For those curious as to why player must wait exactly 86 seconds, 1986 is the year HAL Laboratory first opened its doors–it’s an easter egg within an easter egg!

The third and final HAL Room in Kirby and the Forgotten Land can be discovered in the Redgar Forbidden Lands. After entering the control room by climbing above the presses in “Burning, Churning Power Plant”, head all the way back outside to the beginning of the level to find a ladder that previously was not there. After entering the room, destroy all the boxes around the pillar to reveal the words HAL and claim your rewards by using the Mouthful Mode Vending Machine ability!

The Semi-Return of Tilt ’n’ Tumble

Kirby has always been the best character to experiment with. Want to figure out if a concept works for a title? Just stick the malleable super tuff pink puff in there and make him fit your game’s premise. Back during the era of the Game Boy, Nintendo and HAL Laboratory went all-in on creating games that would challenge the limitations of both the games industry and their hardware. Kirby Tilt ‘n’ Tumble was an ambitious project of the two that utilized an advanced accelerometer cartridge for the colorized iteration of the Game Boy. While it is far from being the franchise’s most known spin-off, Tilt ‘n’ Tumble has garnered a cult following over the years for its brilliant control scheme that feels like rolling a ball in a box.

In Kirby and the Forgotten Land, late into the game players can find the Game-Shop Waddle Dee who will set up his vendor right next to the Colosseum. The Game-Shop Waddle Dee provides only one game: Tilt-and-Roll Kirby. This is of course a direct reference to Kirby Tilt ‘n’ Tumble for the Game Boy Color. The mini-game featuring six levels has players controlling a Kirby ball in a small box through gyro movement. In each level, the player must carefully roll through a series of obstacles to make it to the goal ring. Like the original Tilt ‘n’ Tumble game, some of these small-scale obstacles can still be a challenge to overcome with this control scheme.

Stepping away from Kirby’s life on the Nintendo Switch for a moment, since 2015 there has been an official Kirby restaurant in Japan called the Kirby Café. Now permanently housed within Tokyo’s Skytree Mall, the Kirby Café is the official home of many Kirby-themed meals and drinks you have probably seen online. While it may have missed out on being referenced in Star Allies and Super Kirby Clash, Kirby and the Forgotten Land does contain a single reference to the real-life restaurant. The Kirby Burger menu item at the Waddle Dee Café is from the real Kirby Café’s menu.

At the restaurant, there are actually three variations of the “Kirby Burger” meal; the standard Kirby one, a Waddle Dee version, and most recently a classic Kirby iteration inspired by the pink puff’s debut look. To coincide with the release of the Forgotten Land, the Waddle Dee Café’s Kirby Car Cake was also made available at the Kirby Café as a limited-time birthday cake option.

One well-known recurring easter egg that the Kirby franchise has paraded since Kirby’s Adventure on the Nintendo Entertainment System is how the pink puff’s games always contain some hidden acronyms. The vast majority of mainline Kirby games contain secret messages when looking at the first letter of each world’s name in order. In Kirby and the Forgotten Land there are six worlds; Natural Plains, Everbay Coast, Wondaria Remains, Winter Horns, Originull Wasteland, Redgar Forbidden Lands, and Lab Discovera.

Taking the first letter out of each world (with the exception of Lab Discovera) and placing them in order spells out “NEWWORLD”. The reference has a double meaning as it represents the game’s location and the main villain’s objective. While Kirby has been to locations on other planets before within PopStar’s Milky Way, in the Forgotten Land the pink puff and his friends are transported to a new world they have never explored. As for the Beast Pack leaders (and without any spoilers for those who have not finished the game), their mission is to see a new world reborn through their efforts.

One last cheeky reference to developer HAL Laboratory can be found as an acronym within Kirby and the Forgotten Land’s order of fictional companies. If the player translates the names of the abandoned businesses (Holine, Alivel, and Lightron) as they find them, the three will spell out “HAL” with their first letters.