Arguing with Myself is a series about one idiot, Joseph Ulfsrud, presenting two sides of an informal, arguably scholarly argument about video games. This first series is about turn-based combat. Last Week, he presented the argument of game design professors: Turn-based JRPG combat is a terrible place to start design.

Japanese Role-Playing Games (JRPGs) have an interesting legacy. Hironobu Sakaguchi’s Final Fantasy saved the failing Square, and they just released its 15th installment. There’s a myth behind the immensely popular Dragon Quest that millions of Japanese workers call in sick on release day. Pokemon can only be described as a globalized phenomenon, nowadays so popular that people are walking into traffic to spread the word of Go. Looking at this history, it’s tough to concede the point that maybe a JRPG prototype isn’t good. But, for the sake of argument, I’m going to. At least, I’ll concede the idea that taking turns hitting attack isn’t inherently good design, and I do it to defend JRPGs.

You see, it’s not a state-machine system or the damage numbers that make a JRPG, like some idiot said last week. Yes, that is how they play, it is how they control, but it’s not looking deep enough into the system. No, it’s not the feedback hooks of EXP points or new items (because we aren’t free-to-play), it isn’t the card game they included on the side, and we aren’t talking about story here. In my opinion, at a very basic level, any good JRPG design depends on two major mechanics (not exclusively, mind you) – a matching game and call-response. 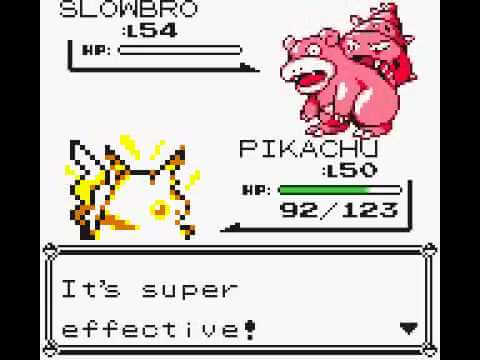 Pokemon is arguably the simplest JRPG out there, in terms of single player. Abstractly, you gather a team of different attacks coupled with various weaknesses, in an effort to exploit any weaknesses your enemies expose to you. The team-building is a good system, but it is the matching of attacks to weaknesses that keeps players going. Sure, the system gives a nice feedback noise when you hit the weakness, but the satisfaction comes before that.

The satisfaction designers seek isn’t so much about actually hitting the super-effective move as it is forcing players to recognize a strategy. As my professors teach it, “You aren’t trying to make them feel good with jingles or by making the numbers go higher – you want to make the player feel smart. Or skilled. Maybe even lucky.” The matching game system is a basic way to make someone feel smart. When you see a Fearow, you know to thunderbolt. Or maybe rock slide. For knowing that, you get to see the worst Pokemon ever (come at me) get destroyed. It’s good to reward players for their knowledge, and it gives players those warm fuzzies we all play games for. This is actually why I kinda hate that Pokemon Sun and Moon show the effectiveness of moves, but whatever. Let’s talk about call-response.

A call-response system is a reference to conversation, or to music. You could call it pattern recognition, but call-response refers to the tangible interaction. In gaming, you’d see call-response mainly in a boss fight. In a real-time game, a player might see the ‘Call’ of a wind-up, and ‘Respond’ by dodging the coming attack. The first time you saw that wind-up, you might not have dodged, but once they call you again, you will. Also, Guitar Hero is an entire game of call-response, all the notes ‘call’ on your actions, and you respond with some sweet, sweet plastic guitar action. See, call-response systems are about teaching system behaviors, and asking the player to deal. Calling is a way to change the rules of the game, or change what the game asks of the player. Generally, a call is for a very specific response. Like blocking an arrow fired at you. Stomping on a Goomba.

Now, I’d argue call-response is used to great effect in Turn-based games, specifically boss fights. Every boss in a turn-based game operates on some kind of pattern (they are programmed, after all), and, if well designed, these bosses will teach you how to fight them. They set new rules of combat, with the hopes of tripping you up. For example, there’s a brutal fight with everyone’s least favorite but also like maybe everyone’s favorite JRPG villain… 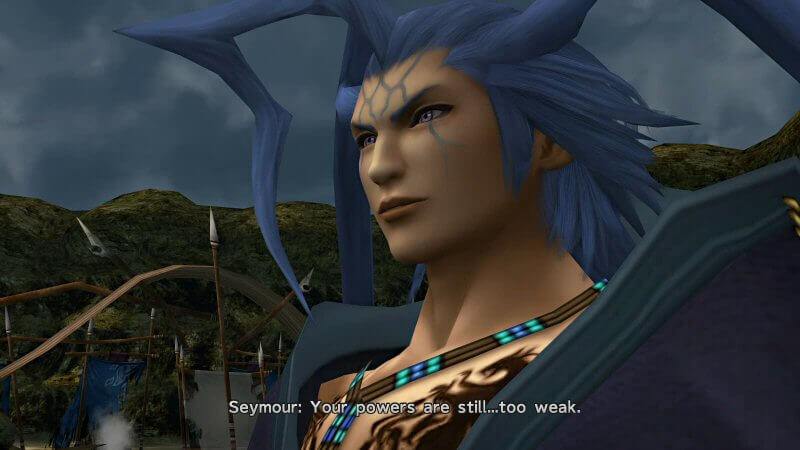 “Does your hair even lift?”

Seymour, that blue-haired, high-pitched wierdo from Final Fantasy X challenges you to fisticuffs at the end of Mt. Gagazet. During this bout, Seymour and his best buddy for all times Mortiorchis (spooky) will hit you with a one-two punch. Seymour will inflict a character with Zombie, which reverses healing effects. On Morty’s next turn, he will cast full-life on the zombie’d character, killing them instantly. In other words, they reset your priorities in battle – now, curing zombification is the #1 priority, where before, your priority was to remove that hairy creep from the planet. Once enough of these boss behavior layers are poured on, the player can build a strategy to counteract it.  After losing dozens of Tiduses to zombification, finally beating that haunting nightmare of a creature is quite satisfying.

Now, nearly every game uses some generalized form of call-response. You jump when shockwaves come your way. It’s basic gaming. The reason I enjoy it most in JRPGs is because every action is discrete, and the call-response is so damn specific. In Dark souls, there is room for error when you dodge or attack. Conversely, hitting a menu item in a JRPG leaves little room for error. It is pure strategic input from the player. Quickly, you learn, if the boss puts reflect on himself, you best dispel it. Because of this specificity, longer fights can feel like a dance, the boss steps to the left, you twerk right out of there, and get back to slapping him or her with your various weapons.

Shut up, idiot, and tell us what it means!

The point is that a turn-based attack simulator isn’t inherently satisfying. However, matching games and pattern recognition games are absolutely satisfying, when it comes to making a player feel smart. Most JRPGs implement some level of these two mechanics, and so here, I will postulate that my professors got it wrong. An MVP of a turn-based game absolutely needs patterns and varying attacks / weaknesses. It may be more complex than a typical MVP, but JRPGs are more complex than your typical game. This forms a good basis to stack other mechanics and story, like Pokemon‘s team building, FFX‘s strategic character switching, or Persona‘s dating sim. I’m not saying this is the only way it can work, it’s just one man’s opinion. But, we can agree JRPGs work, and have worked for over 20 years. As to my professors, I’m not about to let someone more educated, knowledgeable, and experienced tell me what is and isn’t right, that’s for damn sure.

Joseph Ulfsrud is a stupid sasquatch man who graduated from UTD with a bachelor’s degree in Game Design. He games. @bigjoeu