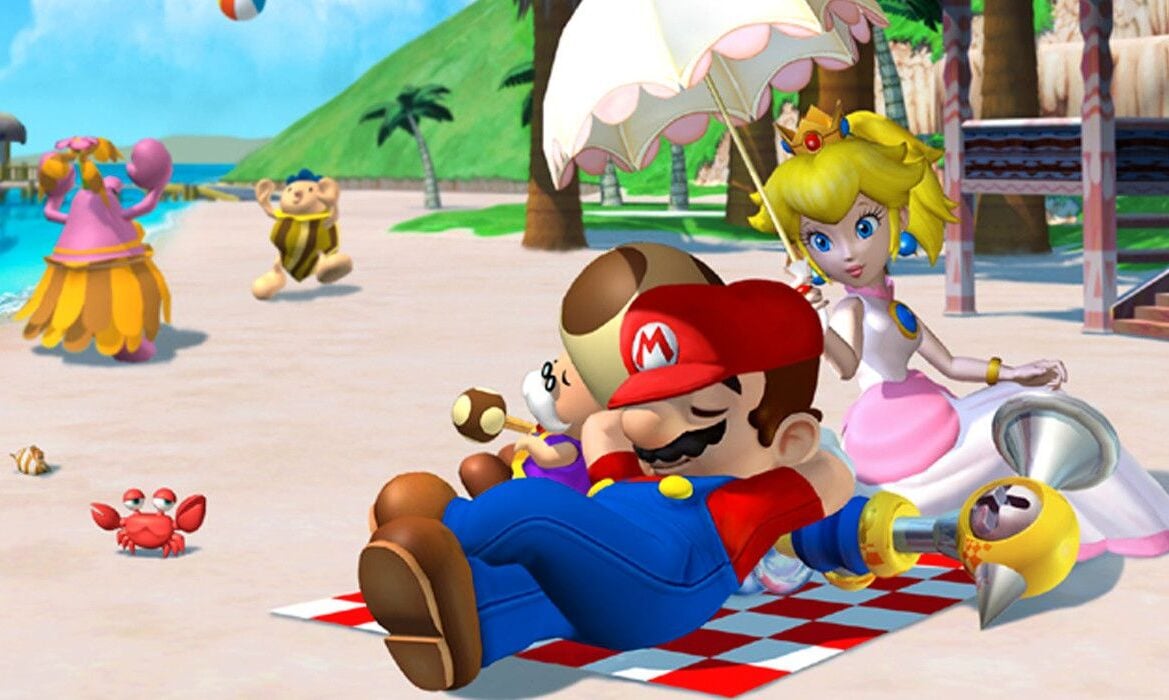 There exists a prevailing notion that Mario games like 2002’s Super Mario Sunshine are at their best when they focus almost exclusively on their core platforming gameplay. Generally, so the saying goes, franchises like The Legend of Zelda are what players should go to if they want captivating adventures and worlds to get lost in. Meanwhile, those looking for pure, unadulterated “video-gamey” fun can stick to the Mario series. It is true that Mario has always been incredibly gameplay-centric, and this has consistently led to most of the series’ entires being remarkably enjoyable to play and revisit. At the same time, though, this notion glosses over the fact that for much of its early years, the Mario series continuously pushed the boundaries of what kinds of adventures and worlds were possible within a platforming space.

Even as far back as the original Super Mario Bros., the idea of an extensive quest spanning several disinct levels that were not limited to single screens was incredibly novel for its time. Super Mario Bros. 3 and Super Mario World would build upon what the original established by implementing a world map feature that not only placed each game’s myriad levels within a larger context, but also contained its own tantalizing secrets and locales to discover. Later on, Super Mario 64 expanded the series’ scope in a major way, featuring sprawling 3D worlds that players could naturally uncover by navigating a fully-explorable hub area.

But it was with Super Mario Sunshine where the series’ continually-evolving scope would arguably reach its peak. Although the overall structure remained mostly the same as it was in Mario 64, Sunshine took full advantage of the Gamecube’s power to accomplish what prior installments never could: a fully-realized, cohesive world not far off from our own. Isle Delfino, the game’s central location, is the glue that holds everything together, with the level design, narrative elements, and structure all existing in service of it rather than the other way around. Even 20 years on, no other Mario game has crafted a world quite like that of Mario Sunshine.

Typically, the Mario series boasts a huge number of distinct locales and biomes to explore, from grasslands, to volcanoes, to even massive mechanical recreations of Mario himself. But since Isle Delfino is a tropical paradise, Mario Sunshine evidently has to match all of its major levels to that central theme. This may sound creatively limiting at first, but the game nonetheless manages to craft interesting, imaginative level themes that still adhere to the tropical setting. An idyllic countryside village serves as an effective substitute for the grassland areas that typically kick off each Mario adventure, and setting the trademark haunted area within a multistory resort hotel makes for what might be the series’ most novel take on that trope yet.

It is often said that limitation breeds creativity, and it’s hard to think of a better example of this in the Mario series than Sunshine. If the developers at Nintendo had chosen not to strictly enforce the tropical theming, then we might not have gotten, for example, the towering ancestral ruins of Noki Bay, easily one of the most arresting locations in the franchise.

Isle Delfino’s impact on Mario Sunshine’s levels goes beyond their theming, however. Unlike other Mario locations, which are often fantastical and feature several platforms and level design elements floating in the air, Isle Delfino is much more grounded in its aesthetic design. Because of this, outside of the secret levels, nearly every platform or surface that Mario can walk on has some kind of in-universe reason for existing.

For instance, Ricco Harbor’s central platforming area is not just there for the sake of it. Since it is set in a shipping port, this obstacle course is designed as a sprawling network of interconnected catwalks that players can easily imagine the port workers using to access higher portions of massive trading vessels. In a similar vein, having certain amusement park attractions in Pinna Park function as makeshift platforms seems like a no-brainer for a game like this. Although this grounded level design restricts how crazy the platform layouts can get to a degree, it enhances the immersion of these areas in a way few other Mario games can manage. It even has the added benefit of making Mario’s acrobatic feats seem even more impressive, as they now function as an effective contrast against the more realistic environments.

The appeal of Isle Delfino goes even further than this, as the developers made sure to flesh it out with a distinct culture for players to immerse themselves in. Every area has a purpose within the larger world, and by reading the Guide Book and talking to the island’s inhabitants, players can gain a richer understanding of these areas and the island as a whole. What makes this even better is that oftentimes, these world-building details do not serve as mere flavor text. Players can directly participate and interact with the landmarks, social gatherings, and cultural landmarks of each area, and doing so is often necessary to uncover all of the island’s secrets and rewards. Hearing about the Sand Bird that has been incubated in Gelato Beach for over a century is one thing. To see its egg, protect it over the course of multiple missions, and ride on top of it once it hatches to obtain blue coins and a Shine Sprite is another thing entirely.

Another element that brings Isle Delfino’s culture to life is its inhabitants, the Piantas and the Nokis. In other Mario games, NPCs are mostly copy-pasted throughout the environment with no way to tell them apart visually. In Mario Sunshine, however, players can easily distinguish every single NPC in each level from each other thanks to their distinct color schemes, clothing, and other visual identifiers. Not only does this go a long way toward making these characters seem like real people, but it also serves a helpful gameplay function in that it allows players to retain certain bits of information more easily.

For instance, during one mission in Pianta Village, players can find and chat with an orange Pianta in a purple shirt, who will tell them about “a secret cash stash” that can be obtained by standing on a yellow mushroom and spraying water at the moon. Doing so reveals a hidden blue coin, which may lead to players making a mental note of her unique visual identifiers and come back to her in a later mission to see if she has another useful hint. Sure enough, talking to her again during the eighth mission reveals the existence of a second secret stash, a Shine Sprite that can be obtained by standing in the middle of the village’s giant palm tree and spraying at the sun. If this character looked exactly the same as every other Pianta, then this second hint probably would have been quite a bit more difficult to find.

Not only do the different NPCs in Mario Sunshine have unique designs, but they also come with unique personalities and even miniature arcs that evolve as players make their way through each mission. Coming back to certain NPCs during each mission and seeing what they are up to is almost always a treat, and this leads to them being far more memorable than they would have been otherwise. I remember the mustachioed Pianta in Ricco Harbor that tosses Mario across increasingly longer distances, eventually being able to toss him all the way across the map. I remember the Doot-Doot Sisters, a group of street performers that show up in various levels and often make annoyed remarks when Mario talks to them. I remember the researcher in Gelato Beach who studies the Sand Bird and becomes all downhearted after it hatches and leaves. These characters do not have any kind of important role in Mario’s adventure, but they imbue the setting with so much personality and, well, character that it is hard not to become attached to them in some way.

Nothing Stays the Same for Long

It’s not just the NPCs that go through arcs—the levels do too. This is why the stages now ask players to collect the main Shine Sprites in a specific order, which for some may seem like a bizarre direction to go in after Mario 64’s more freeform structure. What the levels lose in freedom of choice, they more than make up for in narrative cohesion.

Every time Mario arrives in a new area, the people residing there are dealing with some sort of problem, such as the submerged hotel in Sirena Beach and the polluted water in Noki Bay. Mario solves them and deals with whatever problems crop up in their place over the course of several missions, which leads to the environment subtly changing over time. Oftentimes, the first mission of any given area will render it in a chaotic state, with goop, enemies, and other threats scattered across large portions of the stage. By the time players chase off Shadow Mario and reaches the eighth mission, however, the area becomes much more peaceful. Everything is completely clear of goop, enemies are few and far between, and the NPCs are freely roaming around and carrying on with their lives.

This environmental evolution is far from revolutionary, but it is nonetheless incredibly effective at getting players more invested in the world. Unlike many other Mario titles, Sunshine gives players a meaningful purpose for visiting these levels outside of collecting stars and saving the princess. Seeing the communities within these levels gradually heal as players complete more objectives gives the impression that they are actually leaving a tangible impact on the world around them, which in turn makes it seem that much more real.

None of this is to imply that Mario Sunshine is inherently better than other installments due to its approach to world design. If anything, it has garnered a deserved reputation for being a bit of a flawed game. Plenty of other analyses have thoroughly dissected the frankly baffling design choices it suffers from, but even so, it’s no wonder why so many still look back on Mario Sunshine incredibly fondly. Future installments may have refined Mario’s platforming gameplay to a science, but Sunshine remains the best at making players feel like they are part of a community. And that in and of itself is worth commending.