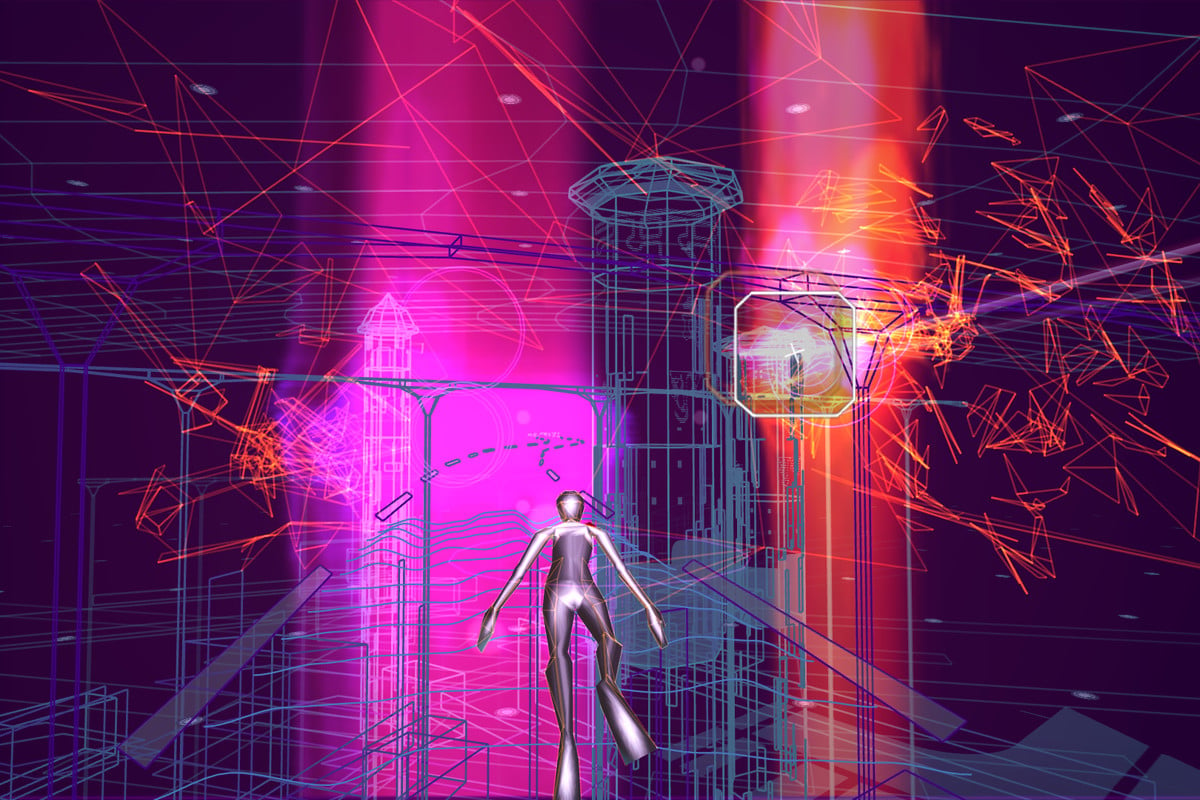 In gaming analysis circles, conventional wisdom states that gameplay is king. I happen to subscribe to this notion; after all, games are a uniquely interactive medium, so they tend to be at their best when their participants are given direct control over them as often as possible. However, even the greatest of kings can only accomplish so much on their own. Titles that heavily emphasize gameplay can still be elevated considerably by other elements, whether they be music or visuals. But there exists a certain subset of games that place a notable emphasis on these aesthetic elements while still incorporating them in ways that are only possible in an interactive medium. Sega’s one-of-a-kind rail shooter Rez, which saw its first release in North America 20 years ago, still stands as one of the best examples of this kind of experience.

On the surface, Rez is a game about a hacker that aims to bring existential artificial intelligence back online while fighting off viruses and other computer-themed threats. Beyond that, though, Rez is a game that attempts to invoke synesthesia within the player. For those who may not know, synesthesia is a phenomenon in which the activation of one of the five senses indirectly leads to the activation of another. For instance, someone may hear a particular sound and associate it with a certain color, or they may start to feel some kind of pain or pressure in a specific body part when they see that same body part on another person being harmed.

So how does one go about replicating these kinds of corresponding sensations in a video game? Several other games have tackled this challenge in their own ways, but Rez specifically creates a rhythmic visual response, auditory response, or both for every input the player makes. Whenever the player presses the lock-on button, a synth drumbeat can be heard, and this beat is always synced to the background music no matter when the button is pressed. When the player moves the aiming reticle over background targets while locking on, more pronounced drumbeats start playing while “locked” icons dynamically close in on each target and strands of light form in front of the player avatar, all in time to the background music once again.

And once the player lets go of the lock-on button, the avatar lets loose a flurry of lasers that destroy each target in a dazzling explosion of color, all of which occurs in a unique, spaced-out rhythm depending on how many targets are locked on to at once. The synth sounds that play when shooting down foes also change depending on the enemies targeted as well as what form the player avatar is currently in.

All of these corresponding sights and sounds occur within a relatively simple background beat, which puts these sensory stimuli as well as the player’s controller inputs into focus. As a result, the player may start to closely associate these competing stimuli with each other as they experience the game. They may begin to “hear colors” or “feel music” in a more literal sense, especially as they continue to play and expose themselves to these stimuli for longer. That is synesthesia at work, and although this all may sound like nonsense to an outside observer, it becomes much easier to see what Rez is going for once it is properly experienced with a controller in hand. The visuals, sound, and gameplay all feed into each other, and the result is a multi-sensory journey that no other game has quite managed to replicate.

These feelings are only enhanced by the ways in which the music and visuals evolve throughout each stage. Every level excels at this, but the first stage is still probably the standout example. It starts off in an empty black void, with only a few waving vector lines and barely recognizable background noise that is solely filled in by the sounds the player makes when shooting down foes. As soon as the player moves past this section, the music dynamically transitions into a recognizable background beat, and more bits of scenery begin to reveal themselves.

As the player progresses through the first few sections of the stage, more background elements, including recognizable ancient Egyptian iconography, become visible, and the beat grows faster and more multilayered. By the time the player reaches the fifth section or so, the background develops into a vibrant, pulsating light show, and the music explodes into an energetic symphony of synths and samples. All of this builds and builds until the player reaches the boss, at which point the background dramatically shifts into a harsh blue color and the music grows noticeably more sinister.

These dynamic elements sound amazing on paper, and they work even better in execution. The sensation of progressing through these levels while the visuals and music blossom to such a dramatic extent is nothing short of electrifying, and each and every player’s input only makes these elements even more full and enriching. Whenever I finish any level in Rez, I really feel like I have gone through a journey, and that is not something that can be said for every game.

Although the gameplay of Rez is inseparable from the visuals and music, it is still worth commending on its own. This is not to say that the gameplay is terribly deep or complex; in fact, it can be accurately described as a simplified version of Panzer Dragoon, one of Sega’s other rail shooter IPs. The lock-on mechanic is ripped straight from that series, but Rez differentiates itself in that it does not give players any control over their avatar’s movement.

Many players may see this as overly restrictive, and they would not be wrong for thinking so. But this restriction has a notable benefit in that it forces players to take each threat seriously. With movement completely fixed, the only way for players to defend themselves is to shoot down anything that comes their way, and this can be easier said than done, especially since the inherently rhythmic nature of the shooting mechanics means that every shot takes time before it connects. These restrictions encourage players to really keep an eye out for enemy attacks and act quickly before they connect, and this would not feel quite as crucial if players had complete control over their character.

This need to prioritize threats is further emphasized by the surprisingly punishing health system. The player’s hit points are represented by the multiple forms the avatar can transform into, and players can level up the avatar’s form by collecting progress nodes. Each node fills one or three squares on the bottom right-hand corner of the screen, and once eight of these squares are filled, the avatar levels up. These nodes do not show up as often as one would think, however, and one hit from any attack will immediately level down the avatar.

Essentially, players have to work fairly hard to increase their hit points, and that hard work can be undone in the blink of an eye by a single attack. Rez is far from one of the hardest rail shooters out there, but this health system really demands players to stay on their guard at all times. In many other games, players can gain at least some sort of advantage by tanking certain hits, but here, they cannot afford to do that at nearly any point. The penalty for each mistake may be harsh, but it helps players become more skilled in the long run, which makes it feel more than justified.

Another area where the gameplay succeeds is in Rez’s boss encounters. In most games that focus heavily on the audiovisual experience, boss fights tend to not be present, and if they are, they usually serve as a simple footnote to any given segment. Here, though, the bosses are all lengthy, multiphase gauntlets that thoroughly test the player’s ability to quickly assess and neutralize threats.

What makes these fights particularly impressive is that, despite the player’s limited control scheme, they all feel remarkably unique and creative in their own right. For instance, one boss, Mars, is a multiarmed, starfish-esque firewall that engulfs players and forces them to survive through self-contained waves of obstacles. Meanwhile, Uranus, the boss of the penultimate stage, is a small flying saucer that commands a swarm of floating prisms, and players can beat it either by concentrating fire on the saucer or by destroying all of its prisms. Uranus in particular is a notable highlight of the game; chasing and getting chased by a mass of prisms forming the shape of a running humanoid while barreling through vector tunnels at high speed to the sound of blaring guitar riffs is the kind of experience only a video game can provide.

A Virtual World Worth Returning To

Thanks in part to the game’s surprisingly memorable boss fights and emphasis on skill growth, Rez is shockingly enjoyable to replay. Aesthetically-focused games like this tend to be one-and-done affairs, but Rez constantly encourages players to revisit levels and shoot for higher scores, which is mainly accomplished by shooting down as many enemies as possible. Doing so not only increases the difficulty of the stage’s boss, but also grants players further access to a whole host of unlockable extras.

The main campaign only consists of five levels, but these unlockables help give the game plenty of staying power. The extras on offer include a boss rush mode and even a bonus sixth stage, but probably the most fascinating and bewildering of these is the Trance Mission, which is essentially an endlessly looping area where players can freely shoot down prisms without fear of dying. That is all well and good, except that the visuals are some of the trippiest in the entire game, and the background music is what can only be described as an assault on the ears. The glitchy, droning synths and jarring transitions make for an exceptionally disconcerting experience, but they are also what makes it so captivating. There was no real reason for the developers to include the Trance Mission other than for the sake of it, but the experience of playing Rez would not quite be the same without it.

The word “experience” has been used several times in this writing, but that really is the best way to describe Rez. It is a tour de force of multi-sensory design that has the power to suck players in and enrapture them as no other game can. It can be difficult to convey what it truly feels like to play Rez, but once you experience it, it will likely stick with you like glue. Rez may be two decades old at this point, but its impact has yet to fade.