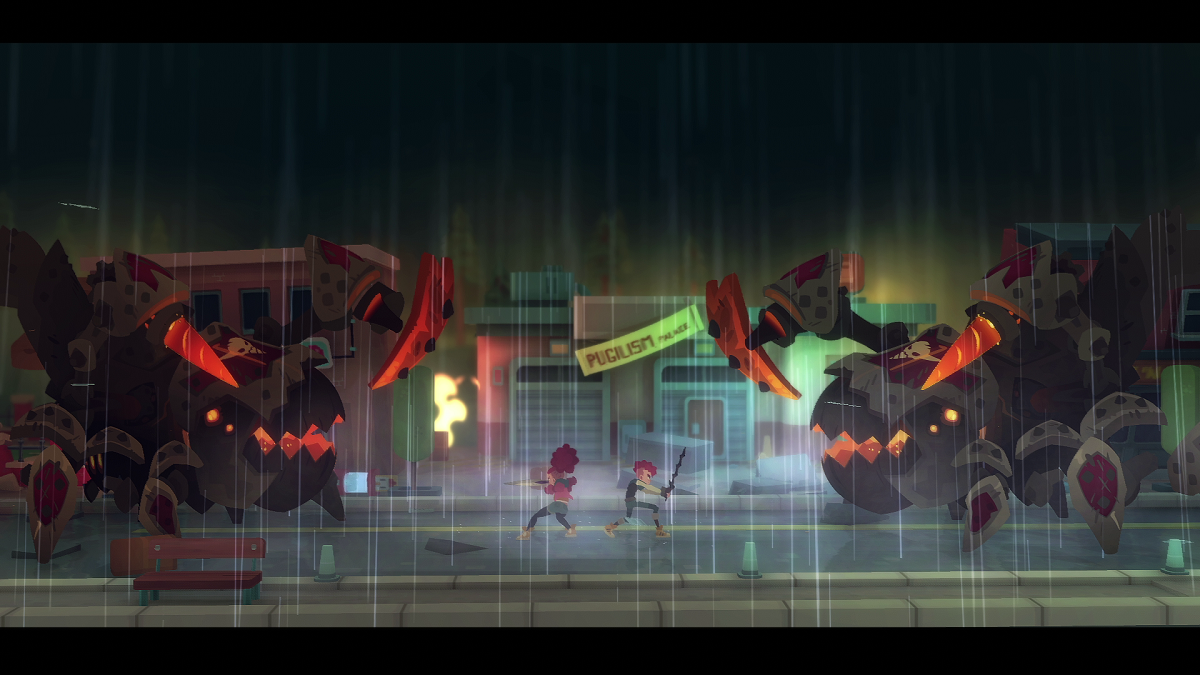 Between Streets of Rage 4, the re-release of Scott Pilgrim vs. the World: The Game, and the upcoming River City Girls 2 and TMNT: Shredder’s Revenge, beat ’em ups have been enjoying a renaissance for the last couple of years. Young Souls is the latest addition to this lineup, and though it might’ve been made by a comparatively small team, it absolutely deserves a spot at the table as a must-play for any fan of the genre.

A World in Peril

Young Souls opens during its final chapter, with its heroes on the brink of death and the town they’d worked so hard to protect up in flames. As they make their final stand, the game flashes back to the very beginning and a question is instantly posed: was that the inevitable future, or can it be changed throughout the game?

As much as Young Souls is about stopping a calamity from befalling Earth, its true focus is on its dual protagonists Tristan and Jenn. The twins had a rough upbringing as orphans, one that made them learn to depend on each other before anyone else. This dynamic plays out constantly over the course of the story, whether it’s the duo’s uneasiness about calling their adoptive father “dad” or their natural instinct to lean on each other during times of hardship. When the kindly professor who’s taken them in is suddenly kidnapped, Tristan and Jenn get thrown into a surreal world of goblins and underground civilizations as they fight side-by-side to rescue him.

It’s a simple yet effective setup. By day, the twins are free to explore town and go clothes shopping or access a secret underground hideout where they can buy and upgrade combat gear. At night, they delve into the deep underground and transport to various dungeons using the professor’s technology in an attempt to bring him home. Thankfully, there’s no actual in-game clock to wait on; players are free to jump between locations at their whim, with slick cutscenes providing the necessary context.

At the core of Young Souls is a rock-solid gameplay loop that melds the best elements of beat ’em ups and dungeon crawlers: enter a dungeon, fight through waves of enemies, gather loot, face the dungeon boss, get the ultimate loot, and repeat. Frenetic hack ‘n slash combat keeps this loop fresh thanks to a sizable variety of enemy types to learn and weapons to master, with many weapons having special attributes such as Fast Attack Speed, Mana Regen, Stun, and so on. A healthy dose of RPG elements also lend to an overarching sense of progression; the more enemies Jenn and Tristan take out, the more often they’ll level up and improve their base strength, health, and stamina stats.

Though it can be argued that Young Souls was designed around co-op (each twin can be controlled by a separate player), it still works shockingly well as a single-player game in a way that’s unusual for most beat ’em ups. As a solo player, combat transforms from having two players on-screen to a tag-team fighting style where the twins can trade places near-instantly at the press of a button. Since each has their own health bar and ability cooldowns, it provides great incentive for players to experiment with builds that complement each other. Building Jenn as a lightweight assassin with high stamina and fast attack speed only felt viable because I was able to swap her out with a slow but heavily armored and insanely powerful Tristan. The level of customization is deep, and the feeling that comes with unlocking the perfect new weapon or armor piece to fit the build you’re working towards is unmatched.

Respect Above All Else

In many ways, the design philosophy underlying Young Souls screams “focus” and “restraint.” There’s enough weapon variety to foster a multitude of playstyles, but not so many to cause choice paralysis. Stat training and weapon upgrades are key to staying fighting fit, but the processes for both are incredibly simple and easy to access (though the stat training minigames in the gym are certainly a low point). Each level of the subterranean world has a wealth of routes to explore and revisit for treasure, but 100%ing the game only takes about 13 hours. It’s a tight, cohesive package that doesn’t wear out its welcome and eschews complex systems for ease of use.

This bleeds directly into what’s perhaps Young Soul’s greatest quality: its respect for the player. Every single dungeon starts with a gate that can be warped to at any time while underground, making it easy to quickly hop in and out of play sessions. Since certain chests and dungeons throughout the underground are locked behind keys attained in the late-game, the ability to quickly transport back to these areas is a massive time-saver.

Then there’s the surprisingly comprehensive accessibility menu, which lets players customize everything from basic difficulty modifiers like enemy health and damage taken to more granular, needs-based options like auto-block and enemy attack speed. The list is far from exhaustive, but seeing this many options implemented by an indie studio is nothing short of admirable.

From its beautiful art direction to its addicting loot system that respects its players’ time, Young Souls is yet another triumph for the beat ’em up genre. It’s a tight, streamlined affair that rewards experimentation and provides a decent challenge for those who want it. At the same time, 1P2P has managed to tell a surprisingly emotional tale here that humanizes the otherworldly baddies rather than simply painting them all as “evil” and letting that be the end of it. Jenn and Tristan are kids, and as they go about slaying thousands of goblins, they aren’t unaffected by it. Young Souls would’ve already been an easy recommendation, but it’s this bit of heart that makes it all the more special.

For more on Young Souls, check out our interview with the developer.