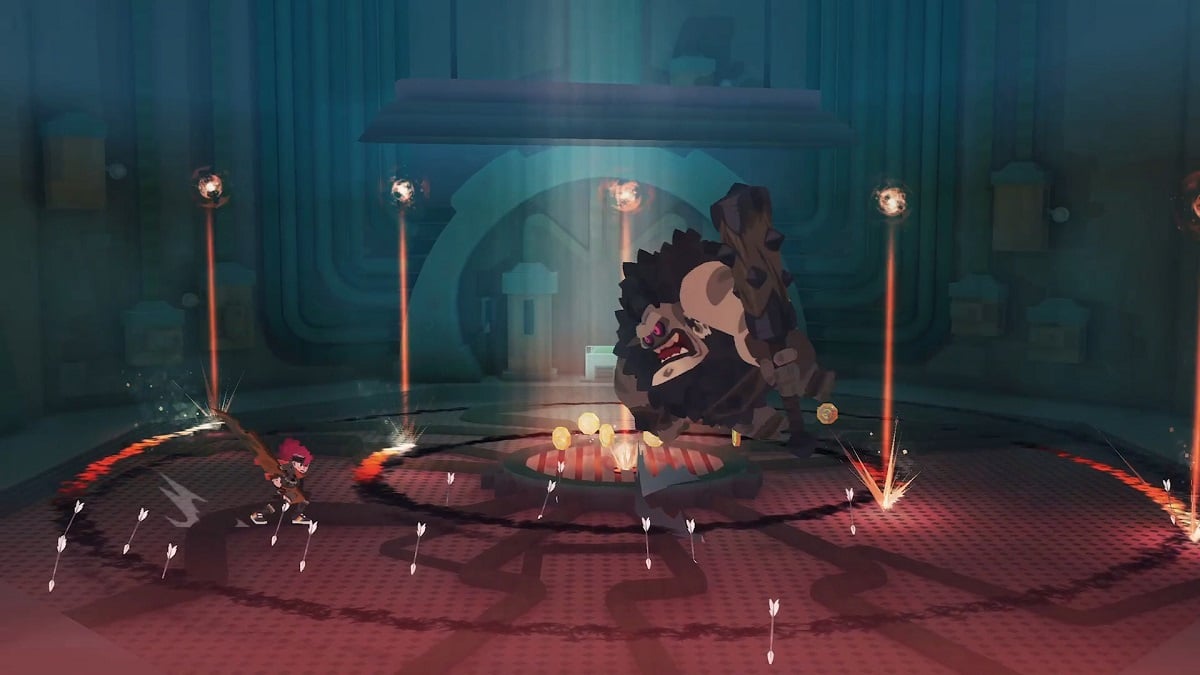 The last several years have been quite kind to fans of the beat ’em up genre, and next couple years–with announcements of River City Girls 2 and TMNT: Shredder’s Revenge–look to be just as strong. Of all the highly-anticipated beat ’em ups planned for release, however, Young Souls may be the most unique. Melding traditional action with RPG and dungeon-crawling elements, the systems in Young Souls are significantly more expansive than your typical brawler. And while the focus is set squarely on beating waves of enemies to a pulp, there’s also a surprisingly wholesome story underpinning all the combat taking place on screen.

Goomba Stomp had the chance to catch up with Co-Creator of Young Souls and developer 1P2P itself, Jérôme Fait, to discuss how the studio decided on a dungeon-based framework, what the inspirations were behind the styles of the twin protagonists, how the game was initially designed around co-op, and more.

GS: First of all, congratulations on starting to close in on the release of Young Souls after all these years! To start, what inspired you to create a beat ’em up? And what sparked the (refreshing) decision to make it dungeon-based?

Fait: Thank you very much! Indeed, Young Souls took a long time to complete because we made the choice to mix genres, and that takes a long time to master. We started the development in 2016, but we began to think about it even earlier than that.

At that time, unlike today, the beat’ em up genre did not have many representatives. The most recent one back then was Dragon’s Crown, and its approach to the genre inspired us a lot, especially in its structure (the principle of mixing light hack and slash with beat’ em up mechanics).

We were also drawn to the idea of ​​both visual and functional customization. We wanted a system where the look as well as the characters’ gameplay would evolve over the course of the adventure, where both are being influenced by the tastes of the players and the adversity offered by the game. The style of the dungeon-crawler adapted well to all our desires, so we went in this direction.

GS: Creative boss fights are typically a highlight of the genre. Though the demo gave us a small taste, what kind of fearsome foes can our readers look forward to facing?

Fait: Yes! We spent a lot of time working on our bosses and we are very proud of them. In Young Souls you will find a lot of them, many more than in a classic beat’ em up formula. We have put in a lot of effort to vary the fights and always surprise the players.

To give you a few examples, you will come across classics like giant trolls, legendary goblin knights in magnificent armor, summoner shamans…but also more unexpected foes, like a cyborg who does martial arts, a wizard who can kill you in one blow, a shapeshifter, and even a goblin granny in an exoskeleton. In total there are more than 40 bosses and mid-bosses waiting for you!

GS: As the stars of Young Souls, Jenn and Tristan are packed with mischievousness and were an absolute delight to see quip back and forth in the demo we played. What inspired the personalities/writing of the twins?

Fait: The idea of playing twins was oriented by gameplay decisions (our desire to make a co-op game and a technical need to have physically close characters), but from the moment we decided to make them siblings, we thought it was important to create a strong relationship between them. They have always been together against all odds, thanks in part to their kinship.

They are therefore best friends… but also brother and sister, so their relationship includes all the particular dynamics that that implies. They know each other perfectly and are both a bit rambunctious, which creates very funny banter.

All the credit for that goes to Matthew Ritter, who brought their relationship to life by writing witty and punchy dialogue.

GS: Being able to swap between the twins on the fly is a great touch. Did that come as a byproduct of Young Souls being designed as a co-op game first? What other hurdles did you have to overcome to accommodate single players, if any?

Fait: Exactly that! We initially thought of the game as a co-op game since we were both developing side-by-side in the same office. It was when we got separated by COVID and found ourselves testing the game on our own that we realized we needed to spend time on the single-player mode, too.

At first, we wanted to set up an AI teammate. But after a lot of testing, we dismissed this idea. We found it was frustrating to not have control over the second character, so we figured out the swap mechanic.

We are very proud of this mechanic; it makes playing as a single player very interesting, as it encourages you to consider the team as a duo instead of just favoring one of the two characters. As a result, the game didn’t have to undergo too many changes between co-op and single-player. There are a few areas where the monsters are more numerous in co-op and the enemies are more resilient, but you will be playing the same game and the experience is enjoyable in either mode.

GS: Character customization is a major focus, be it for function or fashion. What kind of references did you look at to settle on the various styles of Jenn and Tristan?

Fait: The idea for the customization was to show the influence of both worlds on the outfit of our characters. There are two distinct customization systems in the game; one which is cosmetic (the twins’ clothing) and the other functional (combat gear).

We thought it was fun to let teenage clothes appear underneath their combat gear, like children wearing disguises. Especially at the start of the game, it allows you to create completely disjointed looks in a natural mish-mash sort of way, which is what makes us laugh the most.

The more you progress in the game however, the more you’ll find enveloping armor, and in the end, your heroes will look like real fantasy warriors. We wanted to show the process of this transformation, and the rise in each hero’s power through it. Comparing their crappy looks at the start of their quest with their shimmering armor at the end is really satisfying.

Xavier Houssin, the incredible character designer of the game, is the guy behind all these beautiful outfits.

GS: One of the more unique elements of Young Souls is its world-hopping nature. What was the thought behind letting players experience that whiplash between reality and fantasy?

Fait: I think this game recalls a dream that we all had as children – the call of adventure landing in our ordinary lives and leading us to become the heroes of a fantastic land. This is Harry Potter, this is Narnia, this is Trollhunters – we didn’t have to look very far for inspiration! It’s a cliché in some ways, but it’s very evocative.

We wanted to keep the duality between the two worlds. Switching from one to the other as these two teenagers have simple and mundane social relationships in their ordinary little town, while in the other world, they are heroes on the way to overthrow a government. We love this contrast.

GS: There are clear, strong themes of family and “found family” here. What lessons do you hope players walk away with, if any?

Fait: The theme of family has always been central in setting up the story, through the bond that unites the heroes and the quest that will take them to the depths of the goblin world.

The idea of the relationship between an adoptive father and his children was proposed by Matthew, and we found the concept compelling and refreshing.

You will find this theme throughout the game, even between the main antagonists who, you will discover, have close and conflicting relationships.

However, we wouldn’t necessarily claim that Young Souls places an importance on its message. We know what our game is – above all, a fun brawler where we spend three quarters of the time fighting. But without worrying too much about justifying it, we tried to develop a deeper story than you’d find in your classical beat’ em up, too.

Young Souls launches on all platforms later this year. You can wishlist it on Steam here.