The original Wild Guns was released on the SNES over two decades ago; it’s become a bit of a cult hit, and hard copies of the game demand a pretty high price. Thankfully, Natsume has reprinted the game for the PlayStation 4 and re-titled it Wild Guns Reloaded. Natsume did more than simply port the game over though, as they’ve given its already beautiful sprite a work an HD overhaul, resized the game’s aspect ratio for modern televisions, and updated the game’s soundtrack. Wild Guns Reloaded does a good job of scratching the retro itch, but it’s certainly not without its flaws. 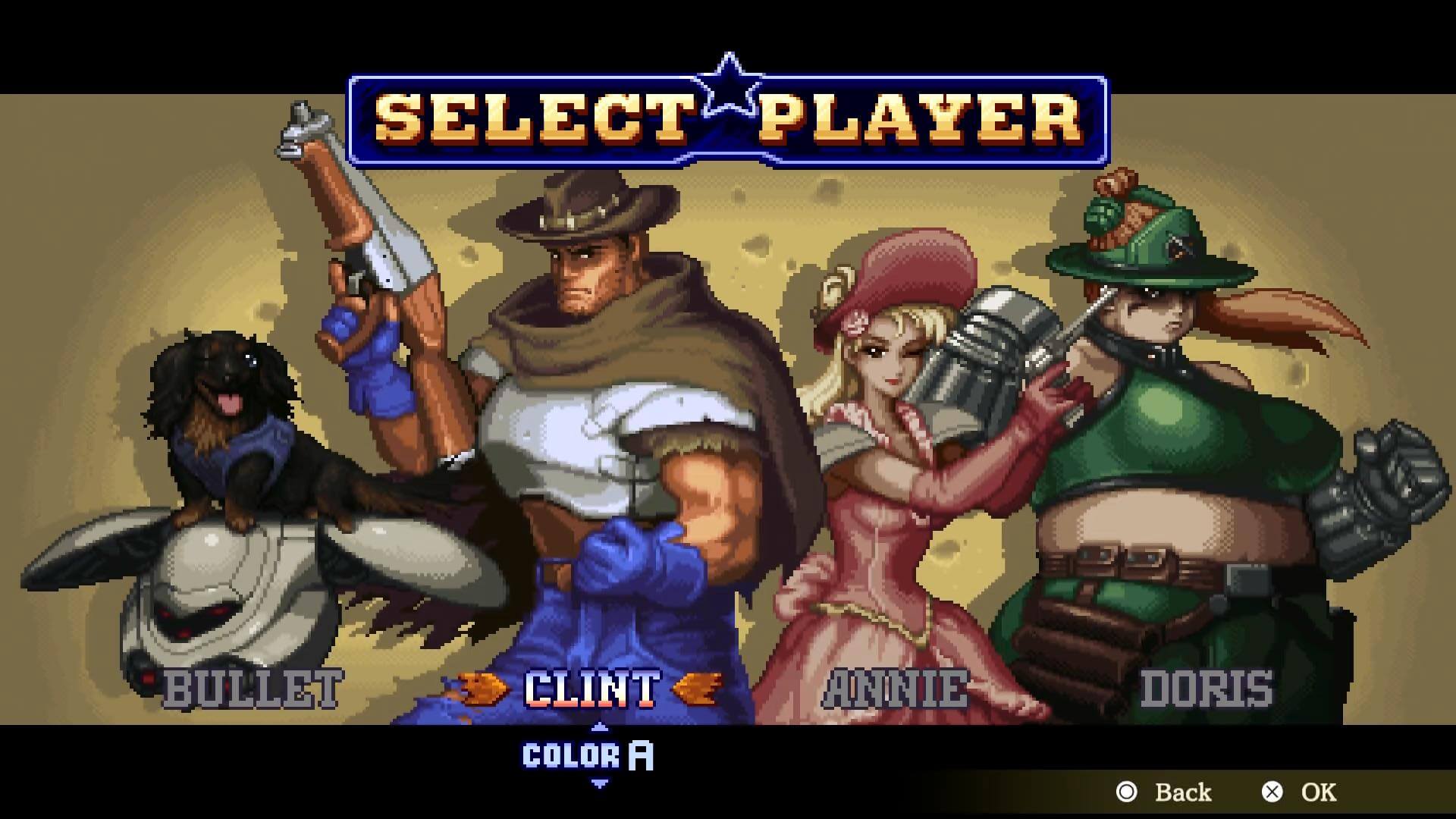 Wild Guns is a shmup game with a sci-fi western setting. It follows a girl named Annie and her gun-for-hire, Clint, as they track down the Kid family of desperados that slaughtered Annie’s family. It’s a pretty basic premise with plenty of throw backs to western genre tropes, but Wild Guns isn’t considered a classic for its story and characters. The game combines elements of typical shump games with gallery shooters, resulting in a somewhat unique style of play that had only been done by one or two titles before. Stages in Wild Guns aren’t about moving from point A to point B like in other shooters such as Gradius or Sunset Riders, but rather about surviving a time limit. Each stage is one screen, and you have to move back and forth as your preferred character to dodge bullets and shoot down bad guys till the clock hits 0 and spawns in a boss or mini-boss.

The controls for Wild Guns are rather simple. You move left and right across the screen when not shooting, and while shooting trying to move instead shifts your reticle around. It sounds confusing, but is easy to get the hang of after a few tries. The game gives you a few options to avoid enemy fire while standing still. The primary way is to simply drop your fire and hit the jump button to leap out of the way, but you can also do a quick-dodge by hitting jump while shooting. Dodging doesn’t give you the same distance as a jump, but it’s quicker to recover from. You also have the option to shoot some enemy bullets before they hit, but this pretty difficult since your reticle and the bullet don’t always line up how you think they will. Enemies can also lob dynamite sticks at you, which you can pick up and throw back by hitting the shoot button over the explosive. Each character also has their own special attack which can (mostly) clear a full screen of enemies. There’s a limited number of them though, but they can be restocked through item drops along with special weapon upgrades, and bonus points. 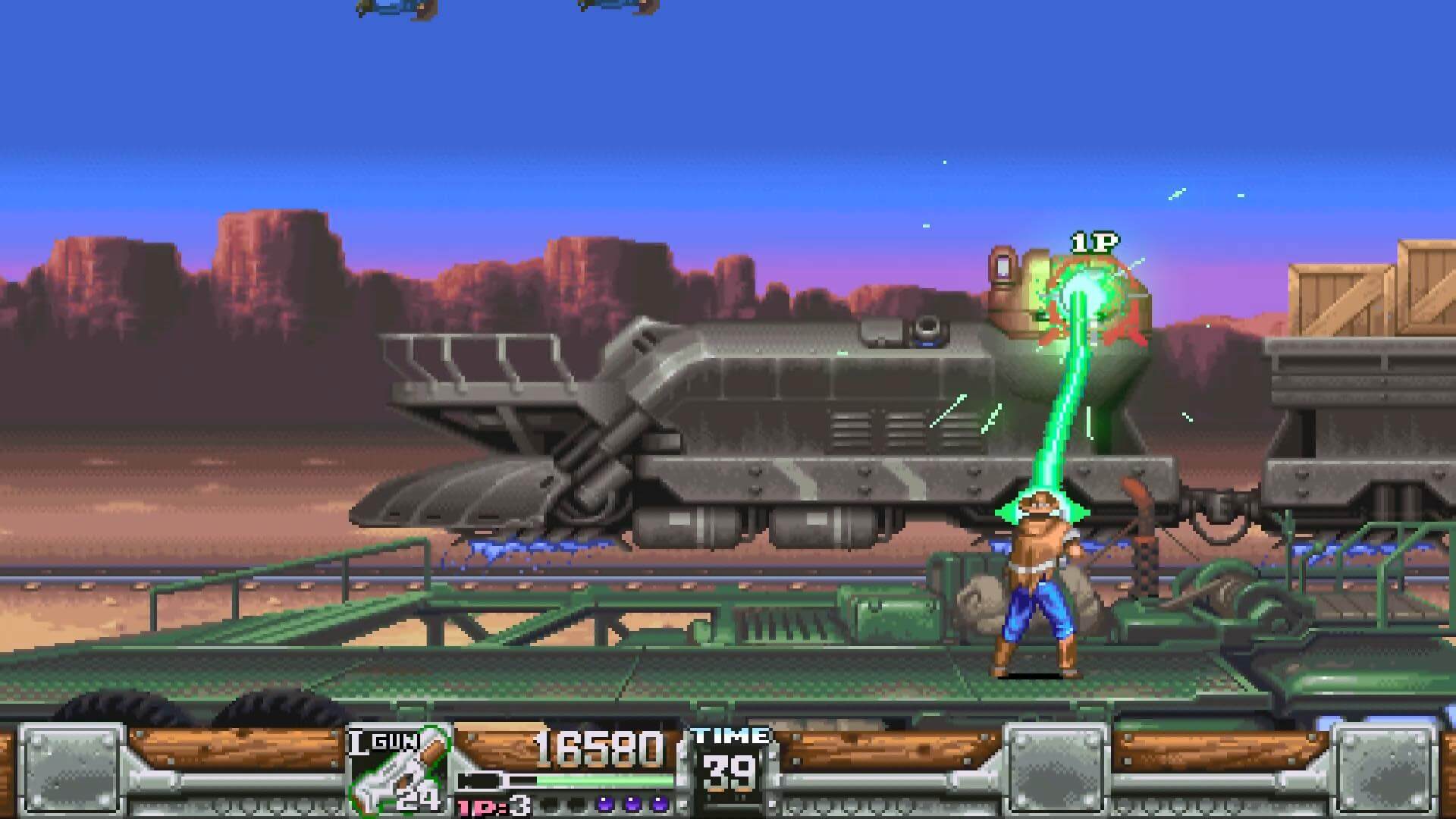 The laser gun is one of the newly added upgrades along with a powerful grenade launcher.

Reloaded brings plenty of new things to the table to make it more than just an HD remaster of a cult classic shooter. There are two new characters, Bullet and Doris, who both break away from the game’s established rules for Annie and Clint. Bullet has the ability to run and shoot at the same time, but his gun auto-locks onto targets, which can be bad when facing multiple enemies on screen. There’s no real priority for targets, so Bullet could end up shooting at a bunch of weaker enemies when you need him to focus someone stronger. Doris lobs explosives at enemies and can clear clustered targets quickly, but it comes at the expense of her being a bigger target. There’s also a few new sections in stages and power ups, but none of these tear away from the challenge the original Wild Guns provided. The game feels aptly balanced to mirroring the difficulty of the SNES original.

Despite an upgrade in sound, music, and certain gameplay elements, Wild Guns Reloaded feels exceptionally bare for its price. The game is lacking several features one would expect from a modern day $30 remaster. Reloaded has 4 player co-op since it added two extra characters to the game, but it’s only local. It’s weird for Reloaded to lack online co-op since this is a game that is way more fun with company. There are online leaderboards though, but this is about as competitive as one can get with their friends online in Reloaded. 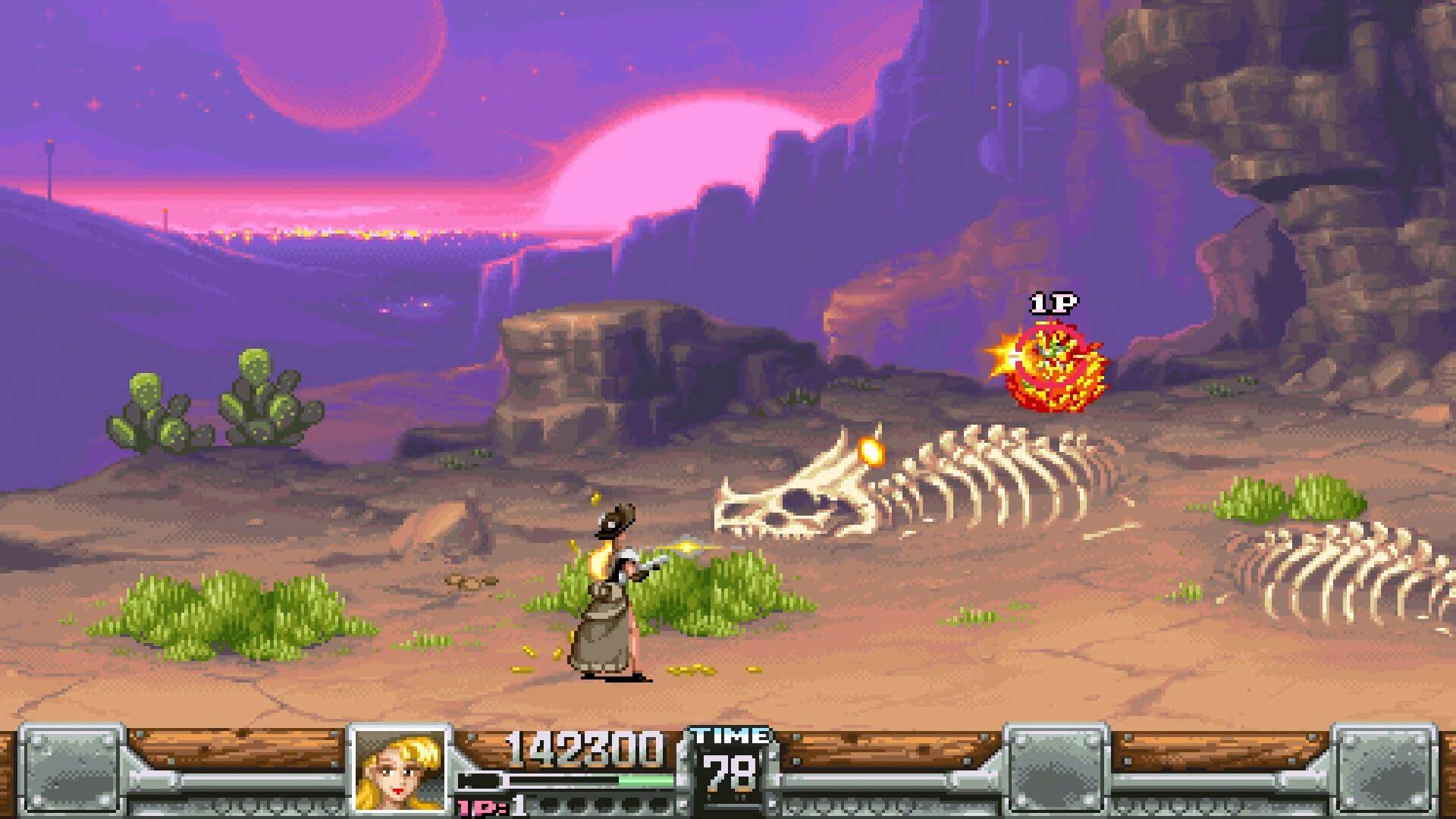 Reloaded is also lacking in unique game modes. The original Wild Guns had a single player and 2 player option for arcade mode and then a VS mode where players would have to beat each other’s scores in a shooting gallery. Reloaded only has the original arcade mode, which makes the game seem sparse. Wild Guns is not easy, as getting hit once results in death and you’re operating on a limited number of lives. Upon death you do have the option to continue, but the game always sends you back to the start of the stage rather than the section you died on. While fans of retro arcade difficulty in their games will enjoy the challenge of Wild Guns Reloaded, it is hard to recommend to casual players. This is a game that could have really benefited from an easier arranged mode in addition to its classic SNES difficulty one.

Wild Guns Reloaded is a great game, but maybe not for its price. The game’s $30 price is pretty uninviting when other retro ports and remasters are being sold for almost half of that. In Japan the game’s digital version is actually selling for about $18, which feels more honest in terms of what you’re paying for. Wild Guns Reloaded is a fun and addictive arcade shooter with beautifully updated sprite work and music, but it’s price feels a bit steep. If this game’s price ever permanently drops to match its price in Japan, then it’ll easily become a must buy for all retro enthusiasts.