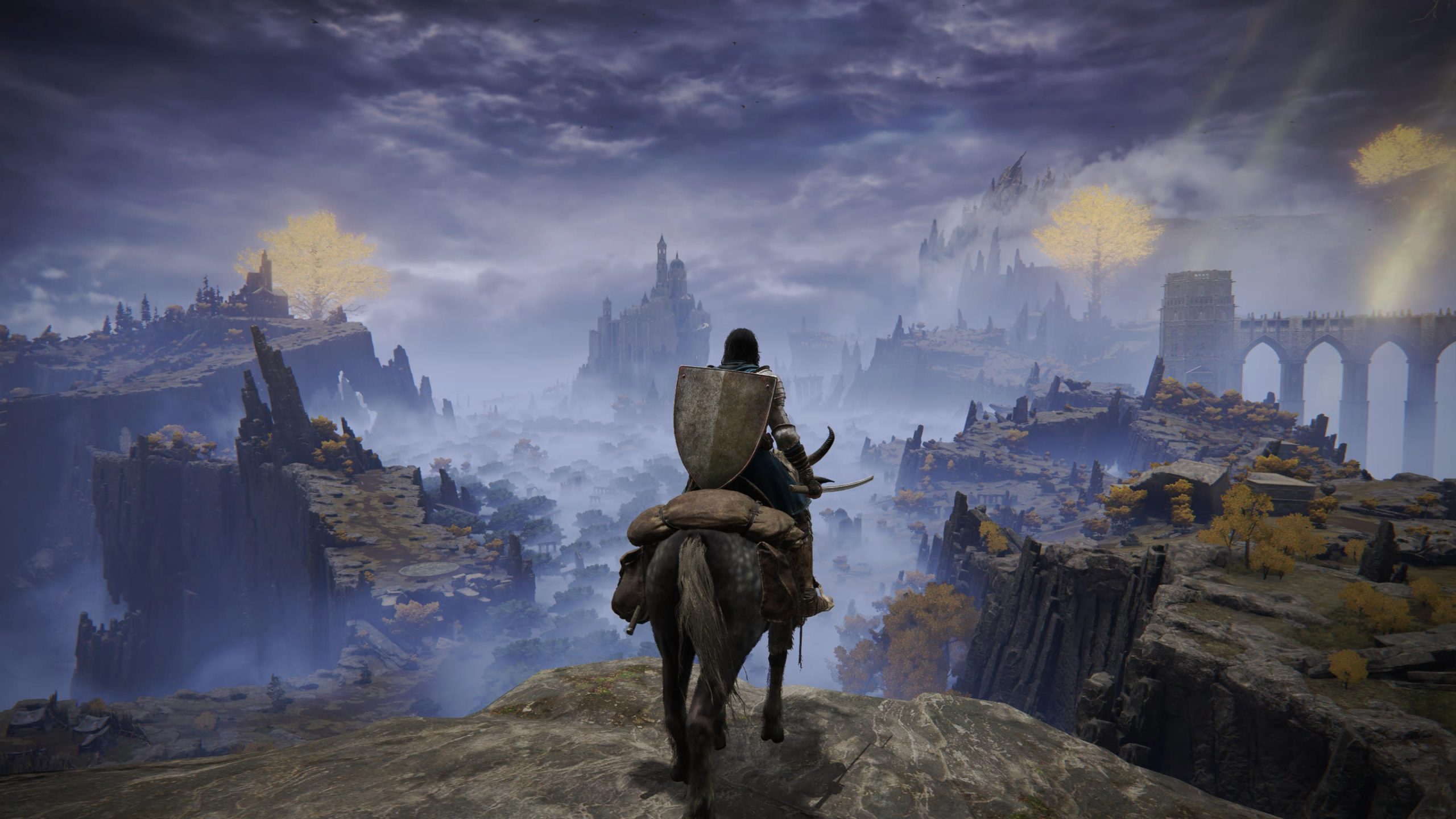 Elden Ring is one of the biggest games to release this year, both in terms of the scale of its world and the scope of its ambition, but if the rumours are true, it’s set to get even bigger. Rumours surrounding what form Elden Ring’s DLC could take have been circling ever since the game first released, but thanks to dataminers, cut content, and unfinished lore, we have more insight into what might be in store than ever before.

FromSoftware has never skimped when it comes to DLC. The Soulsborne developers respect their fans and themselves too much to release anything subpar, anything that is purely cosmetic, or that was clearly cut from the main game to be sold separately later down the line. Soulsborne games are complete packages, carefully constructed worlds brimming with darkness and fallen gods – their stories may be obscure, but all of the pieces are there to find. If the player knows where to look. The lore is intentionally vague, giving players only a fraction of the pieces of the puzzle, and asking them to draw their own conclusions from what they see. Their DLCs, then, simply add a few more pieces to the puzzle.

Dark Souls had the Artorias of the Abyss DLC, in which the Chosen Undead was thrown back in time to learn the true fate of the hero Artorias and what became of the land of Oolacile. Dark Souls 2 had three DLC expansions – the Crown of the Sunken King, the Crown of the Old Iron King, and the Crown of the Ivory King – in which the Undead must travel to three lost kingdoms in order to reclaim three lost crowns in the hopes of finding a cure to the curse. Dark Souls 3 had two pieces of DLC – the Ashes of Ariandel and the Ringed City – both added huge new areas to explore and offered new context into the Age of Fire and what might happen when it’s finally snuffed out for good. And Bloodborne had the Old Hunters DLC, which explained much about the origin of the hunters, and their curse, yet also gave rise to many more questions and theories surrounding the game’s Lovecraftian world.

Each of these previous DLCs added new areas, enemies, and bosses, but more importantly, they added new lore. They changed preconceptions players had already formed in their minds, answered some questions, and raised many more. This is exactly what should be expected of Elden Ring’s DLC.

While it is currently unknown how many DLCs players can expect from Elden Ring or when they might hope to see them (with not even a tease from the developers as of yet), there is plenty to speculate on.

First and foremost are the colosseums. Scattered across the Lands Between are three great stone structures, colosseums where, according to the Ritual Sword talisman, ancient ritualistic battles once took place. Unfortunately, during the age of Radagon and Queen Marika’s consort, these practices died out and the colosseums were shut up tight. This is how the Tarnished finds them in-game: empty, abandoned, and impossible to enter.

But these colosseums seem far too impressive and far too prevalent to be mere set dressing. Each has been placed in an area of great importance – near Stormveil Castle in Limgrave, in a chasm in the northmost part of Caelid, and atop a great hill overlooking Leyndell, the Royal Capital – which fits with their place in the lore, yes, but also makes them near impossible to miss, as though players were meant to find them.

Well, based on the work of YouTuber and cut content expert Lance McDonald, we can see that they were once fully functional. By clipping through the doors, Lance found that the Colosseums’ interiors were remarkably well-detailed, with an open foyer and corridors leading to the seating and the main arena. By playing with the game’s code, he was able to reconstruct a fight between a gladiator enemy and a Lion Guardian in the arena. But other than spectating, what else could these colosseums have been used for? Special boss fights? PvP? Whatever it was, it is clear to see that FromSoftware once had big plans for them, but that they were sadly cut due to time restraints.

So, with so much work put into them already, it would make sense for FromSoftware to revisit the colosseums in the upcoming DLC. Perhaps the Tarnished could be sent back in time to before the shattering of the Elden Ring, before Radagon ruled at Marika’s side and the colosseums were alive with the roar of the crowd and the cries of ritual combatants. Or perhaps they could be opened as PvP arenas, like Dark Souls 3’s Hollow Arena, introduced in the Ashes of Ariandel DLC.

The recent Patch 1.07 did more than just retool existing weapons and spells (specifically altering the damage output in PvP, adding more fuel to the colosseum fire), it also laid the groundwork for a number of potential upcoming features. It’s not uncommon for dataminers to uncover potential add-ons and updates hidden away in patches long before they go live, and that’s exactly what happened here. Dataminer Sennoutantei discovered both “menu strings relating to ray-tracing features” and references to two brand-new maps that “do not otherwise exist in the game data”, buried in the patch’s code.

These secrets, which FromSoftware clearly did not intend to be seen, point to a new ray-tracing mode (which fans have been asking for since launch), but also fire up the imagination as to what these two new areas could be. All previous Soulsborne game DLCs have added sizable new areas for players to explore. But where Elden Ring will go next is anyone’s guess.

Elden Ring’s world is extensive, but while the enormous continent that is the Lands Between appears to have been completely uncovered over the course of the game, several clouds still remain on the world map. These clouds may be hiding unknown, unexplored landmasses – specifically the solitary cloud positioned right in the centre of the map. This cloud, hovering in the middle of the ocean, also happens to be almost exactly in the middle of all six Divine Towers. Could there be a secret island hidden away in this inaccessible part of the ocean? One that holds the secret of Elden Ring’s DLC, and which may shed more light on Queen Marika and her Demigods? Possibly. We’ll just have to wait to find out.

And that’s not even mentioning the other clouds that surround the Lands Between, or the fact that there is still room for many more underground areas to be discovered. Or, if time travel is involved, that these new areas might be reskins of existing areas, remade in all their original glory.

One thing is for certain, however, and that’s that these new areas will need new bosses. And it turns out, FromSoftware may already be setting the groundwork for these, too. Dataminer Sekiro Dubi has trawled through various in-game files and found 30 unused flags whose IDs relate to bosses. These aren’t cut flags, as far as Sekiro Dubi can tell, but appear to have been deliberately left blank, reserved, for future bosses. This means, while it’s unlikely they’d all be used in one go, future DLCs may add up to 30 unique boss encounters to the game. This may sound like too many, but when you factor in field bosses and end-of-dungeon bosses, as well as main bosses, it doesn’t seem so crazy, especially as the main game had over 150 bosses.

Unlike previous Soulsborne games, Elden Ring is remarkably forthcoming when it comes to its story. Cutscenes, character dialogue, and item descriptions play a much bigger role in explaining the events of the Shattering and the fallout it caused, as well as what happened to each of its major players, than in previous games. As a result, the story of Marika and the Lands Between is much less open to interpretation, but that doesn’t mean there aren’t any unresolved story threads that need picking up.

The most obvious of these surrounds Miquella, Demigod and twin brother to Malenia. Miquella, an Empyrean cursed to never grow up, to remain in the body of a child for all eternity, is never properly seen in-game. In an effort to cure himself from this curse, he grew the Haligtree (his own version of the Erdtree) by watering a sapling with his blood, and when it was fully grown, he sequestered himself within its trunk, hoping its power would force him to grow into a full God. Unfortunately for him, this never happened, as Mohg, Lord of Blood, kidnapped him before his transformation was complete, and secreted him away to the Mohgwyn Mausoleum.

If the player is persistent, they can find their way to the Mohgwyn Mausoleum late in the game and find both Mohg and Miquella encased in an enormous cocoon. Step too close and the cocoon will crack open, Mohg will pull himself out, and a decidedly tricky boss battle will ensue. But once Mohg is defeated, the cocoon remains dormant. Miquella’s hand can be seen flopping out of the crack, but nothing the player does will cause him to stir. Perhaps he’s dead, but that seems like a poor end to such an intriguing story. It seems more likely that he is sleeping, and that the upcoming DLC will deal with the repercussions of his awakening. And from what others characters say about Miquella’s power, it will probably result in a whole new world of hurt for the Tarnished.

In a similar vein, defeating Rykard, Lord of Blasphemy, doesn’t end his story. The former Demigod allowed himself to be eaten by the God-Devouring Serpent, transforming himself into something truly unholy. If the player can defeat him in this new form and chooses to return to his boss arena later on, they will discover that he isn’t as dead as he first appeared. But that’s not all, his consort, Lady Tanith, has begun devouring him, in the hopes that he will live within her forever. It is possible to kill her while she does this, but perhaps sparing her could lead to the start of a potential DLC story – the rise of Volcano Manor?

In both cases the DLC would be locked behind optional bosses, and that fits with FromSoftware’s tendency to obscure the entrance to their DLCs. But whatever happens, don’t expect it to be easy. Solsborne DLCs are notorious for upping the difficulty significantly compared to their main games. So when Elden Ring‘s is finally released, be prepared for the fight of your life.

A Little to the Left is Perfectly Puzzling

With a Focus on Scale, Bayonetta 3 is an Absolute Mess

For the Individual: Real-World Cities in Video Games