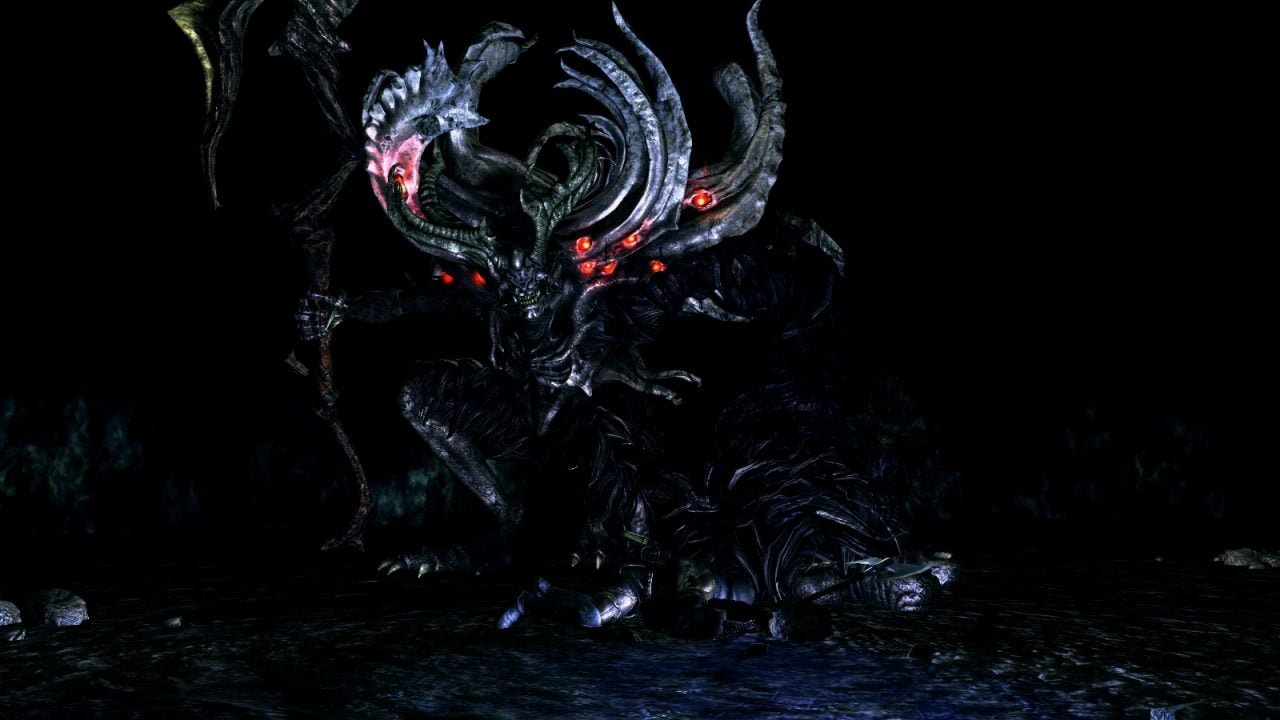 Who is the hardest Dark Souls DLC Boss?

Since Demon’s Souls was released back in 2009 upon the world, the Japanese development team From Software have been up to their ears in critical acclaim. While it’s universally accepted, understood, and feared, that the Souls games are beautifully brutal pieces of design which force the player to learn from what the world presents to them, without babying them too much. But the boss design in this trilogy is a separate beast entirely. Bosses in any RPG are a staple of the core mechanics, functioning as a skill test that makes players draw upon all of their inner power, in a single, usually brilliant, fight that can linger in your mind for hours, or days afterward. From Software takes no prisoners with their more grand enemies, as they understand how to balance the line between satisfying to fight, and difficult enough to present a challenge. However, the numerous packs of DLC that the series has seen since 2011 have had some of gaming’s best boss fights. The most recent addition, the Ashes of Ariandel for Dark Souls III, being no exception to that rule (please be aware, that the list below contains spoilers for the packs talked about).

5 / Crown of the Ivory King / The Burnt Ivory King

Dark Souls II overstayed its use of boss fights that employed multiple, tough enemies for the Next Monarch to fight. The Ruin Sentinels, Royal Rat Vanguard, Royal Rat Authority, Throne Watcher & Defender, are just some of the far too numerous fights which make the player take on unfair odds, with design choices that simply existed to make your life harder. Oddly, however, this trend was bucked in the final DLC pack in the Crown of the Ivory King, with its last boss being a battle that feels more like a siege than a duel. Instead of fighting solo, which is how most Souls fights are designed, the Burnt Ivory King is to be fought with allies by your side, in the form of NPC Knights that remained loyal to keeping the king buried under the throne room. It’s completely fantastic to run across a room, and see your own soldiers keep the burnt knights at bay before they start to close off the portals that continually spawn more of them. This fight rewards players who explored the area because you’re capable of getting four allied knights in the fight, but you only start with the one. Meaning it’s easier if you go back, and try to hunt these poor souls down. The king himself is no laughing matter either, standing about twice the height of the player, with a wide variety of attacks, and spells that can devastate a huge area. It’s not the enemy that makes this stick in your mind then, it’s the atmosphere, the music swelling as you charge toward another line of enemies with support at your side.

Raime is evil. No other word can be so accurately used to describe this monster of a man. Once you enter his arena, you might be fooled into thinking that maybe it’s a gimmick fight, as a sword is the only thing visible upon passing through the fog gate. When the player gets close enough, however, he erupts from under the ashen floor, grabbing the sword from under him, and begins casually wielding it like a stick. On top of this initial intimidation factor, if you didn’t use ashen bolts to destroy the idols around the arena, any damage Raime takes can be instantly regained if he steps near one of the four that line the outside of the battleground. Raime’s first phase is used, more than anything, to remind players that slow wind-up attacks are to be treated with care, as any one of his ultra-sword swipes can obliterate those who are unprepared, or under-leveled. In a cruel twist, though, he wields a longsword in his off hand, to counter the slow swings on his right. But once reaching sixty percent health, you’ll regret ever messing with him. Phase two is a total contradiction to the first, as Raime abandons his short sword, and powers up his ultra-sword, imbuing it with a sickly orange flame. Not only is he more aggressive now, he’s now unlocked new moves to kill you with. Raime is a perfect example of how a single, slow enemy can pull the rug from under players, and kill the unprepared in a single casual swing.

The Abyss is not a fun area. It’s dark, full of specters that endlessly respawn behind the player, and is very panic-inducing. Fittingly, the big bad boss waiting at the end of this expansion is precisely what this hellish locale deserved. Manus is the reclusive fourth Lord of Dark Souls, the furtive pygmy of man that discovered the original Dark Soul from the depths of the First Flame. Despite the timeline and lore, on his revival in Oolacile being very difficult to piece together, the player finds out that someone urged the townspeople to overturn the grave of “primordial man”. After this incident, the Abyss spread through town, corrupting, and crushing all it came across. As a boss, Manus is warped and absolutely abhorrent to look at. Multiple eyes line the horns, and bones that protrude from his face, and back. Aside from looking as he does, his aggression, especially considering his size, in your fight against him is one of the key reasons why he’s just so incredibly hard to kill. Not only does Manus dwarf the player in terms of physicality, his health pool is the largest of any boss in Dark Souls, and on top of that, he’s a powerful sorcerer. The range of attacks he dances between is violent, giving you little time for respite, or for learning. You’re put constantly on the back foot, trying to figure out what on earth is going on. Even as he’s brought down to the lower stretches of his HP, the attacks only become more erratic, forcing players to make perfect dodges between smashes, grabs, and dark magic that can instantly kill you. Defeating Manus is not only an achievement in-game, it’s a personal badge that you can brag about with honor.ADVERTISEMENT. SCROLL TO CONTINUE READING.

The first expansion for Dark Souls III, Ashes of Ariandel, takes the player to a frozen painted world that is lacking its own fire. Much like Ariamis from Dark Souls, the world inside the painting is forsaken, owned by creatures disowned by the land of Lothric, while only a few sane inhabitants remain. Despite the DLC’s length, Ariandel is oozing with lore implications that tie brilliantly into the base game, making the player think about what they’ve seen previously. But this boss fight is wholly unique, as no other boss in the Souls series has three distinct phases that it morphs through. While it’s not unusual for a boss to get a fancy cutscene after the player believes them to be dead, showing them springing back to life, awash with new strength, this fight takes the cake. First, you’ll have to fight the scythe-wielding maiden of the painting, Lady Friede, who’s a dead ringer for Priscilla, another boss from the formerly painted world. Not only is Friede fast, her moves are deadly, causing bleed build-up before you can react to the fact you’ve been cut in two. After likely a couple of tries, once you’ve mastered the art of reacting to her invisibility, she falls. This triggers one of those exciting cutscenes, where Father Ariandel looks up from his lord vessel, and screams at the sight of Friede laying dead on the floor. He loses what little composure he had, and uproots himself, pulling his body towards the player while spraying fire everywhere. And, then Friede is alive again. While this phase isn’t as spine-chilling as the first, it’s far more intense and tiresome. Because you’ll likely know Friede’s attacks, Father Ariandel becomes the largest problem, but the third, and surprising, phase is worse than the other two combined. Black Flame Friede is the answer to players who think that backstabs, and parrying is easy. Those who don’t show this reincarnated, hate-fueled handmaiden the respect she deserves will die in a flash. The best, and worst, part of this boss is that if you die, you have to cycle through every single phase again.

1 / Artorias of the Abyss / Knight Artorias

For those unaware, Knight Artorias is the original poster boy for the Dark Souls box art. Not only is he one of the four knights of Gwyn, the First Lord of Light, and the unwitting master of the Abyss Watchers in Dark Souls III, he’s the sole reason that the abyss didn’t swallow the entire world when it first emerged from Oolacile. From a lore perspective, he’s one of the most important, and documented, figures that the series touches upon. The battle with him, much like his lore, is rewarding, brutal, and impossibly harrowing. Entering a circular arena, that looks suspiciously like a coliseum, the player sees a deformed Oolacile resident, and then Artorias makes his entrance. Charging in, he impales the creature on his sword, before turning on the player. This is where things get sad again, as the abyss creeps upon him, taking control of his already broken body. His moves are erratic but hit like a freight train, even the ‘slap’ attacks, where he simply butts you with the pommel of his ridiculous great sword, are painful. However, this fight will remain forever legendary for the spinning, sliding, and flipping motions that ended so many players’ lives. Artorias isn’t the toughest boss in the Souls series, he’s not even close to being the most hated, or even the hardest. But his fight, his character, and the way he fights you are so perfect that it’s difficult to forget this duel, which feels more like a mercy killing than the player simply disposing of another annoying creature in their way.