The ever present train of Telltale releases continues to roll on at a remarkable pace; whilst some installments such as Game of Thrones and Batman have slowed momentum to some players over the past few years, Telltale’s influence upon the gaming industry can not be understated, completely revolutionizing the point and click adventure genre for the modern age. The end of 2016 marked the next step in Telltale’s acclaimed Walking Dead adaptation, following the life of Clementine, a young girl who struggles to survive in the undead world of Robert Kirkman’s comics. Preceding Season 3 was Batman, and it is important to make reference to this series in the build up to Clementine’s next chapter, chiefly because Batman received a generally mixed reception by some critics and players, condemning it for a lackluster story and inconsequential choices. This will of course vary from person to person, but it was clear in the weeks leading up to Season 3 of Telltale’s Walking Dead that their often maligned tag of “fatigue” was a very real threat.

Titled “A New Frontier”, the next chapter in Telltale’s jewel in the crown needed to be a new frontier not just in the titular sense, but to be the next generational leap of their catalog of franchises. Within the very first scene, it would appear Telltale have indeed made that leap. Season 3 follows the journey of a young man named Javier who, like many, was brought kicking and screaming into the undead apocalypse. A New Frontier impresses right off the bat due to the confidence Telltale exerts in establishing Javier’s story; there is no messing around here in introducing our new protagonist, whose life is torn apart in an instant. The cinematography of the opening sequence also stands out as some of the best in Telltale’s history, making use of what is clearly a next generation engine under the hood. Animations flow much more smoothly, as do facial expressions, finally free of that awkward juttering the old engine was often susceptible to. For a game focused so intently on emotion and expression, to have a sparkling new engine is undoubtedly a breath of fresh air. 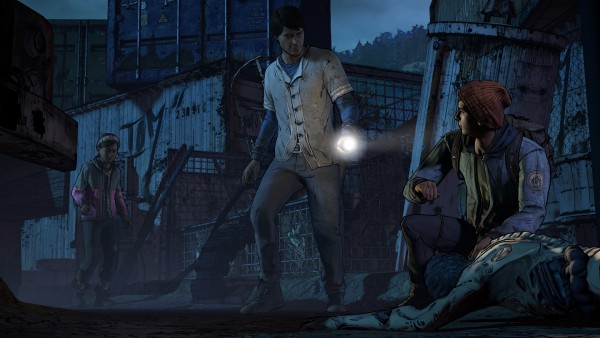 Of course, Telltale’s Walking Dead would not be complete without it’s breakout character, and indeed Clementine returns, yet in a secondary role. Reducing Clementine as the central focus had the potentfial to massively undermine the journey we have seen her undergo, so much credit to the writing team that her new secondary role is the perfect way to see how far Clementine has come, evolved from a frightened and traumatized little girl into a tough, weary survivor. Her pain belittles her age, as does the shotgun she so tightly clings to.

Telltale’s mastery of action and drama is at this point a highly honed tool, and A New Frontier’s first episode does not disappoint in these regards. Deep within however is a major flaw that, if not remedied, could severely damage Season 3’s chances of acclaim, and make the looming threat of fatigue a reality. The action formula found in Telltale’s games has failed to evolve since The Walking Dead’s revolutionary first season, and this lack of growth is a sore point in A New Frontier Episode One that unfortunately prevents it from feeling like a true next gen progression. That is not to say the action is bad, it is simply the same from every game prior. Simply put, where Tales From The Borderlands took Telltale’s action mechanics in exciting and bold new directions, A New Frontier so far remains with the exact same combat and puzzle systems from Season 2.

Franchise fatigue is a cruel mistress as time flies by, a fact Telltale undoubtedly knows all too well. With A New Frontier Episode One significant steps have been taken to push not just The Walking Dead, but the entirety of Telltale’s design philosophies into the next generation. The story is excellent and throws the kitchen sink at players from the get go, blending Javier’s dark debut story and Clementine’s past into one exciting arc. When it comes to writing Telltale continues to excel, but their future hings on their ability to push their established gameplay mechanics to the next level. Only time will tell as Season 3 continues to unfold.