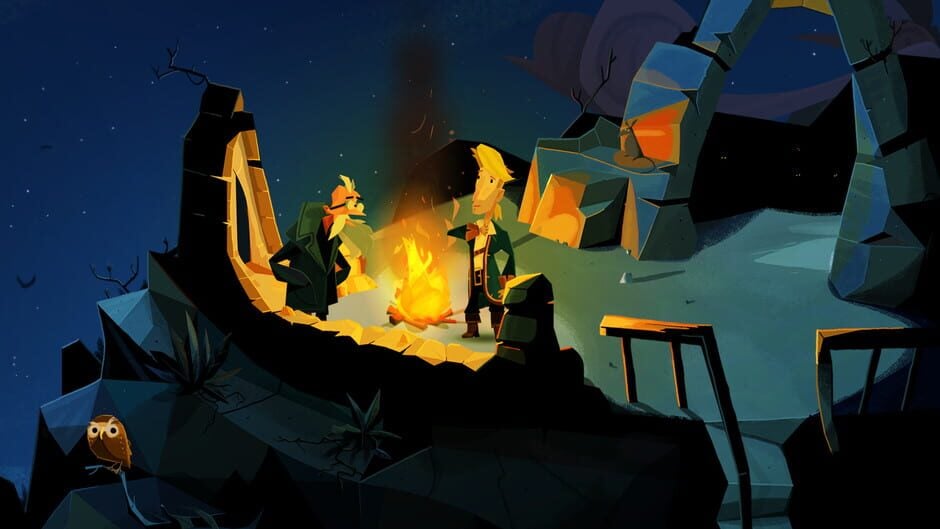 There is a point in Return to Monkey Island where protagonist and eternal optimist Guybrush Threepwood comes across the wreckage of his old ship, the Sea Monkey. It is abandoned on a near-deserted island, smashed to pieces, more driftwood than anything else. But rather than express dismay, Guybrush interprets this discovery as a good omen.

He takes the broken pieces of his ship and assembles something that should never be able to float, let alone sail majestically from island to island. Improbably, it all works, and Guybrush is able to complete his adventure, much to the chagrin of the dastardly pirates and head-scratching puzzles that bar his progress. Return to Monkey Island is a wonderful return to form for Guybrush and the genre as a whole, and a welcome example of creators adapting to a modern landscape with aplomb.

Return of the Kings

Point-and-click adventures have had one hell of a year, ranging from traditional offerings like The Excavation of Hob’s Barrow to more experimental games like Citizen Sleeper. But there is something inherently nostalgic upon firing up Return to Monkey Island, seeing the Lucasfilm logo, and settling in for a few hours of comedy goodness that still make the player think. The Monkey Island franchise is renowned for introducing many players to a specific style of gameplay, that of the comedic point-and-click. Though Return to Monkey Island is hardly the first of its kind, the series’ intrepid protagonist, sharp writing, and continual desire to improve has made every Monkey Island game noteworthy, with Return emerging as the most accessible and player-friendly of the bunch.

Return to Monkey Island begins at a theme park, with a trio of motley youths running amok. After a short tutorial section, where players learn the basics of interacting with their inventory, talking to NPCs, and even save-scumming to see the results of different dialogue choices, they finally come across a salt-and-peppered Guybrush Threepwood relaxing on a bench. He pulls his son aside, and begins to tell him a tale: that of a slightly-older man returning to his old stomping grounds, to recapture his glory days and maybe, just maybe, finally find the elusive Secret of Monkey Island. What follows is an often-hilarious tale of treasure hunting and puzzle solving, full of characters and locations from Guybrush’s past as well as a few new faces and areas.

Stories about father-son relationships are certainly having a moment, but Guybrush telling his son tales of his past is more than just window dressing. This framing is a meta-commentary from creators Ron Gilbert and Dave Grossman about all kinds of things: what does revisiting a storied franchise look like in the modern era? can relationships from decades past remain the same? do game design mechanics from older iterations of the genre still feel enjoyable to engage with?

The answer to that last question is answered immediately and emphatically: not really. As much as the series is held in high regard for its sense of humor and puzzles that encourage lateral thinking, the classic Monkey Island games can be a chore to return to in a mechanical sense. But Return to Monkey Island is a joy to play throughout. From the beginning, the game gives great freedom to players to choose what kind of an experience they’d prefer. Players can choose from Casual or Hardcore mode, each offering different levels of puzzle complexity. There is a robust hint system in-game, meaning that players will never have to make the exasperated turn toward a search engine or video tutorial. There is even a “writer’s cut” available if players want to experience a much wordier version of the game they’re already playing. Options like these feel freeing, and speak to the creators’ desire to fold in new players as well as cater to OGs.

Even players who have never engaged in insult sword fighting or endured the rage of ghost pirate LeChuck will feel charmed after spending just a few minutes with Guybrush. The protagonist is charming and witty, and has helpfully scrapbooked his adventures into an easily digestible “previously on” available from the main menu. Here, players can catch up on Threepwood’s travails from the last few decades and get a sense of the tone of the rest of the game. This scrapbook also showcases Return‘s gorgeous art style, a blend of pop-up books and puppet shows. Every Monkey Island title has a different art direction, and Return chooses to lean into the storybook aesthetic with fantastic results. It is beautiful in action, with flickering fire and crashing waves looking particularly stunning. Art director Rex Crowle (Tearaway, Knights and Bikes) has outdone himself.

While it looks and sounds amazing, it is worth noting that Return to Monkey Island can feel slow-paced. Inherent to the genre is a lot of listening and reading, which can be tiring for the impatient. Jokes rely heavily on wordplay, and the referential humor present might not be everyone’s cup of tea. Upon discussing the merits of mops, a greasy cook calls one “an elegant tool for a more civilized cleaning” – either a hilarious joke or an eye-rolling one, depending on one’s preferences.

To its credit, Return is unafraid to call out the ridiculous aspects of some of its puzzles and acknowledges some of the missteps the series has made; one location, the Museum of Pirate Lore, is almost solely dedicated to poking fun at solutions to puzzles past. But all the meta-commentary in the world won’t change that Return is chock-full of backtracking and puzzle solutions that occasionally feel out of left field. While it is incredibly satisfying to solve puzzles without any outside help, frustration is always one missed key item away.

That said, the dialogue is often hilarious and the overall writing has a tinge of darkness that make the entire experience feel elevated. It is rare to encounter genuine jokes in games that feel funny, and Return to Monkey Island‘s laugh rate is certainly more hits than misses.

As Return to Monkey Island reaches its conclusion, the game takes on a slightly different tone. Nostalgia and melancholy blend with humor that will affect any gamer over a certain age, particularly if they grew up on The Secret of Monkey Island or any of the LucasArts adventure games. Through dialogue, the game even nods towards the fact that Monkey Island games have had notoriously ill-received endings, which serves as a bit of a warning when approaching the final act.

But even if the adventure doesn’t quite stick the landing, it hardly matters. Through character interactions and item descriptions, Return acknowledges that everyone forms their own connection to adventure games. To its credit, Return to Monkey Island never feels maudlin- instead, it serves as a reminder that adventure games will continue to grow and change.

Return to Monkey Island is for everyone. From the genre diehard who reveres Ron Gilbert to the newly-indoctrinated point-and-click fan, there is always something to latch onto. Whether it’s the witty romantic banter between Guybrush and Elaine or a withering remark from a sneering pirate rival, the writing always feels fresh. The accessibility options, the hint book in particular, are a revelation, something that every adventure game developer should consider. But best of all is the developer’s note that appears in the scrapbook upon finishing the game. Heartfelt and honest, Gilbert and Grossman provide the player a rare peek behind the scenes and into the minds of veteran developers. This touching tribute to the Monkey Island series serves as a “thank you” to fans, and is a celebration of what makes adventure games great.