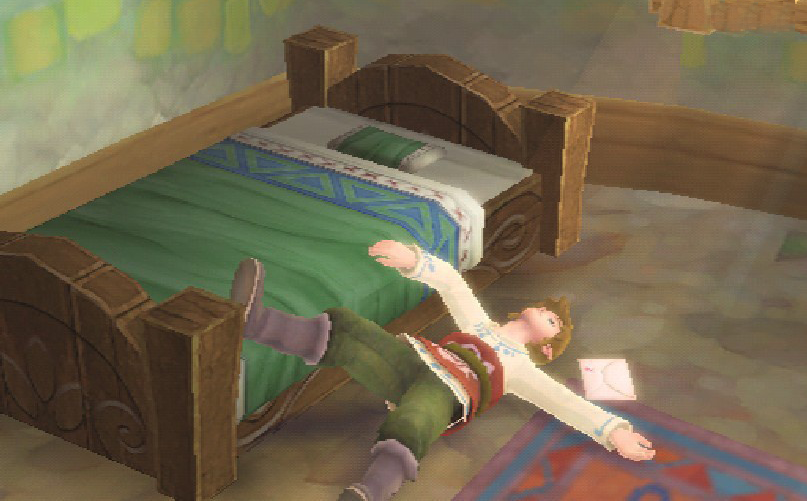 Even though there are some mornings when it seems pointless or almost impossible, part of being a hero involves eventually getting out of bed. Link may have more trouble with this than any other character in the history of gaming, but thanks to the many pokes, prods, loads of yelling, giant bird beaks, anvil hammering, and all the other stand-ins for alarm clocks necessary to rouse the chosen one from his deep slumber, the little guy has always managed to show up. Better late than never, of course. Nothing signifies the start of a classic adventure like the sound of Link yawning. Here’s an analysis of each, from worst to first:

Okay, this barely even counts, since we never really see Link asleep, but with the annoying neighbor kids yelling at him in the morning to come down and play, it has to be put into consideration. Has he overslept yet again? After a day at the ranch and listening to Ilia wax on and on, he may have earned a few winks. Such is the life of Link; he’s just too popular. Still this is the most unsatisfying of all the wake ups, feeling like a good sigh and stretch was left on the editing room floor. Maybe they were afraid the sight of Link’s gaping mouth would make him a less badass warrior, but because of that an amazing adventure will forever be incomplete.

I’ve personally always thought this entire game was a bit on the bland side, and nothing symbolizes that more than the sterile wake up scene. Link is in bed, Link is told to get up, Link gets up – that’s all there is to it. He’s basically just going through the motions, much like all the Capcom Zeldas, and if it weren’t for that little somersault jump he does to get out of bed, his admittedly adorable messy hair, and the odd motion that may or may not represent the hero pulling up his pants (?), Minish Cap may have lost it all to a game that didn’t even show Link waking up.

A Link to the Past

The first instance of the young hero asleep on the job, A Link to the Past sees Link enjoying a peaceful snooze in the home of his uncle, who has just received a telepathic SOS from a certain princess. While at first glance this may seem like a fairly uneventful wake up, there’s actually plenty to dissect here. Was Link really sleeping or just pretending to? How did he hear the message? What was his uncle doing before the ominous message arrived? Just creepily sitting in the dark, staring off into space? Weird. Also, given how quick Link disobeyed his uncle’s command to stay put, I’m guessing they had a bit of that “you’re not my real dad!” kind of relationship.

This is where the Zelda franchise goes a little Inception. Link wakes up, but isn’t the whole island of Koholint and the ensuing adventure that takes place on it just a dream? Of course, it’s not necessarily even his dream, so it’s trippy that he’s even there in the first place, but that’s for another discussion. What we get here is a pretty basic wake up scene, but with the nice touches of some tossing and turning, a decent sit-up, the joke of Link thinking Marin is Zelda, and the Mario-esque Tarin motionless and unblinking, clearly deep in thought off to the side. As an introduction to what will be one of Link’s oddest (and greatest) adventures, there’s an eeriness to the calm that works perfectly.

What makes Link’s wake up scene in The Wind Waker so special isn’t even necessarily Link. His sister Aryll’s spirited look for her older brother is instantly endearing, and as such makes Link seem like a great guy merely by association. It’s excellent character-building for the hero, especially for a Zelda game, and their relationship brings the warm and fuzzy heart to a game with a lot of melancholy depth. As for Link coming out of his lazy, care-free island slumber itself, we get a classic yawn and stretch, and good look at the sweet blue lobster shirt he’s sporting. Also, all of Wind Waker is gorgeous, and this scene is no exception.

Nintendo has always been adept at physical comedy, and Link’s wake up scene from Skyward Sword is a great example. After falling out of bed as a result of an intense nightmare, the Knight of Skyloft wannabe is sprawled across the floor, hazily coming to. It’s already not exactly the most elegant position, so why not make things worse by having a giant bird spit an envelope at him? The timing is perfect and the joke lands, reinforcing an age-old archetype of the down-on-his-luck hero. Naturally, Zelda’s letter also reminds him (and players) of his lazy, oversleeping ways, beating a dead Loftwing via loads of text, but that’s Skyward Sword for you. Still, one of the best.

A Link Between Worlds

Grab this kid some coffee. After another nightmare (just once I’d like to see what a good dream for Link looks like), the sound of his own door banging isn’t enough to rouse the weary little guy, so his “pal” and colleague at the blacksmith’s, Gulley, rears back and screams his lungs out. Again we have good character-building, as clearly Gulley has had to do this more than once, and is understandably annoyed. Link’s yawn sounds less than refreshed, and the woozy daze he’s in doesn’t instill confidence that he’s up for the challenges ahead, but the door slamming jolts him back to his senses and he hops out, ready to smash jars and take on the world. Wish he would’ve grabbed that mask on the wall on his way out though…

That scene would be good enough, but A Link Between Worlds has two more (!) that help propel it so high on the list. The second starts like the first, on Link’s bed with him groaning a bit, probably hoping it was all a dream, but it quickly takes a turn. The introduction of Ravio, the weirdo rabbit guy now squatting in Link’s house, shows off what a jerk this dude will be, making fun of Link after scaring him to death, before he later goes on to earn a fortune while never paying rent.

The third mirrors the first with the pounding of hammer to anvil replacing the banging on the door, but in a familiar setting that isn’t quite right. The blacksmith shop of Lorule is not as friendly a place as Link’s own, and the scene is a great introduction to this similar but darker reflection of Hyrule’s dimension. Also, I’m pretty sure Link had never heard sarcasm like the owner’s wife’s before. Welcome to the real world, kid.

One of the best games of all time also has the best of Link’s oversleeping. After the Great Deku warns totally soothing-voiced Navi that the kingdom is in trouble, she rushes to find the ultimate hero that has been chosen to save the day. When she flies through the door, we get a good look at this brave adventurer- asleep on his cot, whiling the day away. Several not-at-all-annoying cries for Link to wake up later, the kid finally comes to, but instead of rushing off to battle and glory, he just dangles his feet over the edge of the bed like any normal kid would. Can the destiny of Hyrule really depend on such a lazy boy? Apparently it can.

With so many moments that show the Hero of Hyrule taking a nap, clearly Link’s sleep habits are an incredibly important part of his character, possibly revealing Nintendo’s life philosophy, or maybe a commentary on the audience with whom the character is supposed to connect. Perhaps we’ll know one day, but until then these are the best of Link’s wake up scenes. Disagree? Did I miss one? Sound off in the comments below.