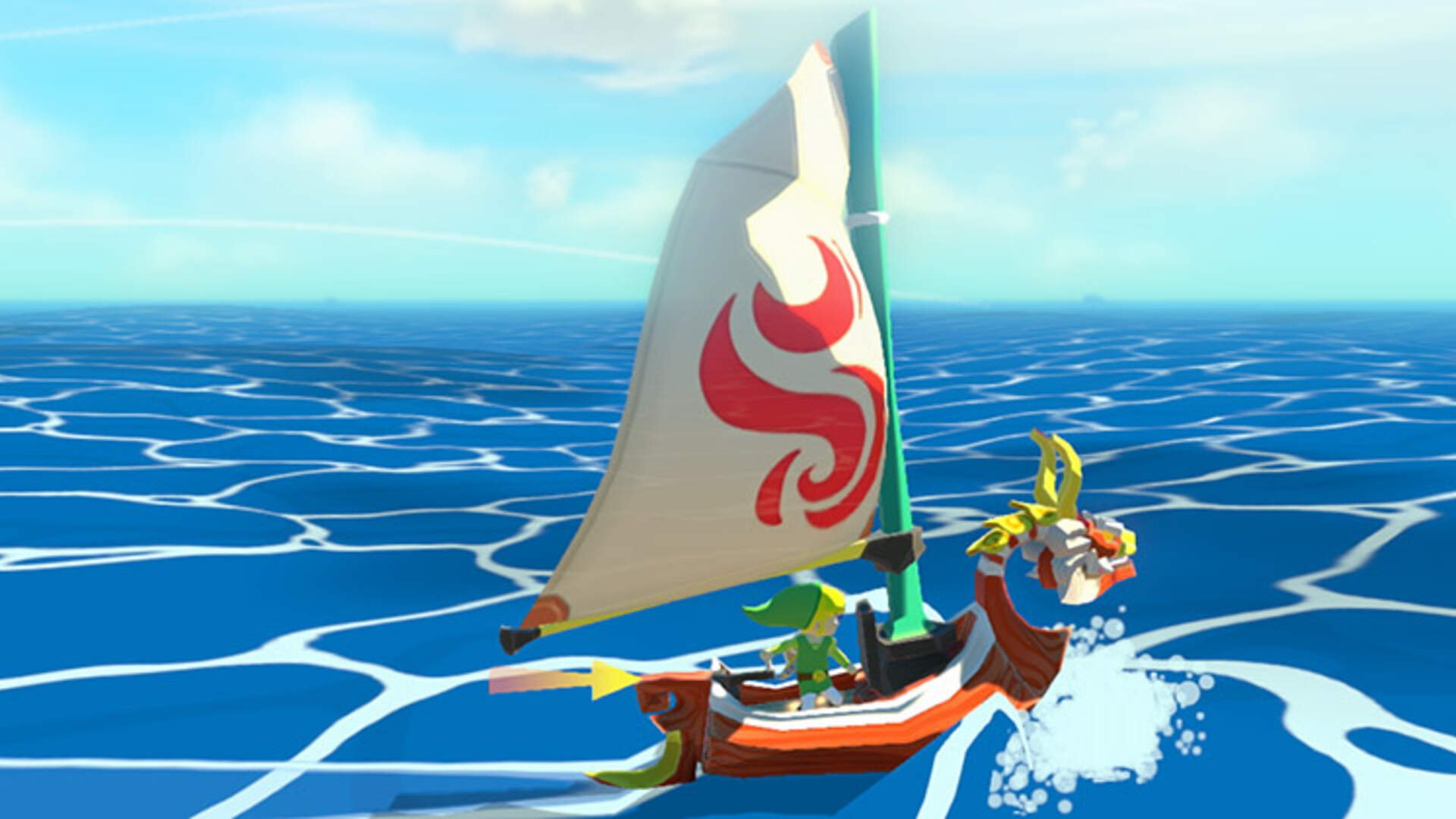 When it comes to adventures, there’s no better example than one of the first-ever written, Homer’s Odyssey. It took a rough outline from Greek myth and expanded it into an epic journey full of wonderment and daring, the granddaddy of all adventure stories. Since that time long ago, there have been many works inspired by this epic poem and the atmosphere it created, with a wide array of varying success. Nintendo’s famed Zelda video game franchise is one such saga that owes a debt to Homer’s masterpiece and has been largely triumphant in its approach, instilling a decades-long love in me for its many iterations. The series has always presented its own mythic front, a timeless feel to its characters and themes in each entry, but for me, the one that best captures that feeling of excitement, danger, and open possibility the Odyssey is known for is, and may always be, The Legend of Zelda: The Wind Waker.

Of course, there are obvious superficial similarities in that both adventures take place primarily at sea, with many horrible monsters encountered (Nintendo also has a fondness for one-eyed creatures) and many, many miles of ocean covered. Brains are as important as brawn, with riddles and puzzles as deadly as battles. There are warriors blown back and forth with the gales brought upon by angry gods (Poseidon and Cyclos), and help to master those same winds by benevolent strangers (Aeolus and Zephos). In each story, the hero comes achingly close to their objective very near the beginning only to have victory ripped from their grasp at the last second, with a longer, tougher journey as rewards for failure. Odysseus’ men stupidly open the bag of wind thinking it to be gold, thus blowing themselves away from Ithaca, clear across the Mediterranean; Link foolishly thinks he can defeat evil with nothing but his pluck and an old sword and is instead easily cast aside out into the endless ocean to an uncertain fate. Neither hero is ready for triumph yet. As with accomplishing anything worthwhile, they must be tested first, and that thoroughly.

But beneath those surface comparisons, there are deeper reasons for linking the two. Something old, subconscious; something felt less and less as the years go by.

In the days of Homer, isolation was a part of life. The village was the world, and the world was the village, as far as most residents had actually experienced. News and stories from the outside would have fascinated a local populace, uneducated in foreign cultures (the slanderous word “barbarian”, for instance, simply meant “non-Greek” back then). We may be more connected today, but curiosity still exists. Glimpses of regions beyond the known borders enraptured audiences long ago, and still do today. The wise storyteller knows that it is adventure that serves as the gateway to the new, and both the Odyssey and The Wind Waker excel at evoking the wonder of discovery within their audience, however deep it may be buried.

This is achieved with the deft handling of possibility. Strange lands, like life, may offer hope and promise, but things don’t always work out the way we’d like. Odysseus watched his men get high with the Lotus Eaters and die with the cannibalistic Laestrygonians. He met Polyphemus as a nobody and left a cursed enemy. The world is scary; it’s dangerous to go alone. In Wind Waker Link has less disastrous results sorting mail with the Rito bird-people of Dragon Roost Island and playing music with the leaf-masked Koroks of the Forest Haven, but this is Nintendo, after all; cannibals probably weren’t going to happen. Still, the strangeness and danger of the new is a strong element, and a major draw as to what makes stories like this worth experiencing. There are fairies who grant magic powers, exotic items at the Windfall auction, and the eerily watchful tower atop the Forsaken Fortress. Each new island approached, a mere initial speck against the vast blue, presents the opportunity for both treasure and trap, the potential of each limited only by imagination.

When I was young I wondered what was out there, in the world. I would climb to the high, thick branches of large trees to take up a perch, and as the timber swayed back and forth rhythmically in the wind, I imagined I was lookout for a ship at sea, exploring the vast blue expanse like the heroes in my favorite stories. The adventures described in Odysseus’ ten-year journey from Troy to Ithaca took hold of my child’s mind and helped instill a desire for bold exploration, one I wish would show itself more often.

There is a luring mystery to the great unknowns, few as they are now in this world. But while looking to the horizon is surely as old as mankind itself, it seems to be practiced mostly by the young. With age the world seems to contract; there’s little time for adventure, less for grand mystery, what scraps exist. The whimsical, daring exploits of Jim Hawkins, though always near the top of my list, have given way a bit to the more pragmatic missions of Captain Jack Aubrey. But the feeling still exists, deep down in a place accessed only by the most powerful of stimulations. The Legend of Zelda: The Wind Waker serves this purpose, and in doing so ultimately reminds of and celebrates the idea that the world belongs to the spirit of youthful adventurers.

It’s not hard to imagine the theoretical Homer himself capitalizing on this as well, reciting the story of the Odyssey in the various village salons and taverns to a populace starving for entertainment. While of course, the adult themes of fidelity and vengeance are ever-present, the major draw of the Odyssey is the strange series of misfortunes and exploits experienced by the famous protagonist. They are stories filled with magical witches and a monstrous Cyclops, giant whirlpools and exotic man-eaters, angry sea-gods, and sirens’ songs. These sorts of imaginations appeal to children of all ages; it’s much more exciting to live in a universe where anything could be out there. The adult drudgery of everyday toil and responsibility is replaced for a few moments by the thrill of danger and the potential of great reward.

Wind Waker begins with Link whiling his day away on a sleepy little island at the edge of the known universe, appropriately named Outset. By talking to villagers whose conversation revolves around the best way to balance enormous jars on one’s head or the secret to sneaking up on and catching a pig, the player gets the impression that nothing much happens here, nor ever will. This is not the place for a hero. The first hint of a larger world is the gift of a spyglass, a device for looking far away, and the second is the appearance of a pirate ship chasing a giant bird that’s kidnapped its captain. You’re not really going to get a more obvious call to adventure, and from then on the player is eager to hit the open water. We have been made aware of the existence of the outside, and we want to see more. Something new, something different, something amazing. We want to be heroes.

Mythology has been exploiting and furthering these instincts for centuries, its lasting power the only proof required of effectiveness. I don’t want the world to be small. I don’t want to be stuck on Outset Island, or held captive on Ogygia with Calypso. Well…maybe that one’s okay, but I certainly wouldn’t want to have stayed on Ithaca and missed out on infamy. It may have been twenty years of Trojan War and desperation, but what a twenty years! And that’s what people want to hear about, that’s what keeps their attention glued to a storyteller. Heroes set out into the great unknown, are met with adversity that must be overcome, and hopefully return home the conqueror of the world. It’s the story of everyday life only on a much grander and more fantastical scale.

That’s exactly what the game offers, in the best way possible. While playing The Legend of Zelda: The Wind Waker, I slew gargantuan monsters, avoided lethal pitfalls, and arrived at the somber, yet hopeful conclusion, one that saw victory achieved only through heavy sacrifice. After all, perfect happy endings are for fairy tales, not myths. I felt as if I was I was stepping back in time, immersed in visuals that conjured Greek motifs, sailing under the hot sun and smashing the countless handmade potteries scattered about that would sadly never end up in a museum. I awoke dormant thoughts of discovery and was glad to see them back, still strong after all this time.

It was not a real adventure, but it felt like one, and that is what good entertainment is supposed to do, whether thousands of years old ancient poetry or an outstanding Nintendo video game.

Editor’s note: This article was originally published on February 28, 2016.