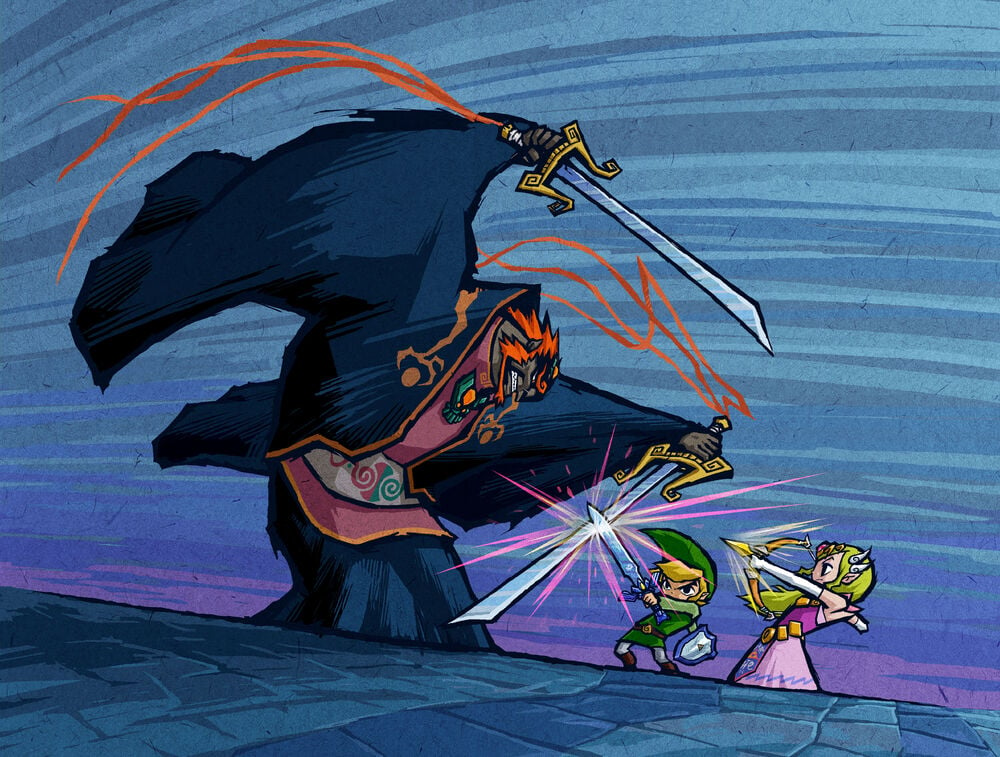 The Legend of Zelda: The Wind Waker is filled with unique mechanics and art, from the innovative sailing to the designs of Tetra’s crew. Its bosses are no different; every single one of them either has a riveting battle, inspired design, or both. Some Legend of Zelda games like Ocarina of Time have objectively bad bosses, such as Morpha. But The Wind Waker has nothing but great bosses, even though some of them are not as unique or hard as others. Each boss has its own charm, regardless of its issues. Still, though, some bosses surpass others because of the sheer creativity of their mechanics or their impact on the plot.

Out of all the bosses in The Wind Waker, Gohdan is one of the most straightforward and simple. Gohdan utilizes two of the most common Zelda strategies: shooting eyes and throwing bombs in mouths. While the boss battle is not bad by any means, it is very predictable and does not have a unique mechanic like most of the other bosses in the game. Despite its simplicity, it can be quite challenging and may require multiple tries to beat it. But its difficulty does not change the fact that Gohdan is very easy to figure out how to defeat.

Kalle Demos makes great use of the newly acquired boomerang. The boss hangs from the ceiling of a cavern, held up by tentacles that resemble vines. In order to truly damage Kalle Demos, the tentacles that it is hanging from must be cut by Link’s boomerang. When it falls, Link is able to attack its weak point with his sword. While this all sounds like a great boss battle, there is one thing that lessens the impact of this fight: Kalle Demos’ extreme vulnerability to Forest Water. If Link chooses to pour Forest Water on its weak point rather than attacking it, Kalle Demos will be defeated instantly. While it is a cool easter egg, it is also extremely anticlimactic if the player chooses to use this strategy.

Molgera, the boss of the Wind Temple, is a giant serpentine creature that emerges from the sand and attempts to capture Link within its jaws. To defeat it, Link must use the hookshot to grab ahold of Molgera’s tongue and make it vulnerable to his sword. This, like Gohdan, is a simple and easy to figure out boss. However, it ranks higher solely because of its music. Molgera’s theme is the best boss music in The Legend of Zelda: The Wind Waker, and is so popular that it received a remix in Hyrule Warriors despite Molgera itself not being present. If its battle were a bit more difficult or unique, Molgera would be the best boss in the game because of its theme and design.

The boss of the Earth Temple, Jalhalla, is a large Poe made up of multiple smaller Poes. Its boss room contains spikes lining the walls as well as patches of light. These two features of the room are vital to the strategy of defeating Jalhalla. While the Poe attacks by blowing Link into the spikes, Link can later retaliate by stunning Jalhalla with light from his Mirror Shield, then throw the boss into the spikes. One of the best moments of the fight is seeing a small Link lift the giant boss over his head through the use of the Power Bracelets. However, this is easier said than done; touching Jalhalla at any point when he is not stunned will result in Link becoming confused, staggering in the wrong directions. All of these unique aspects of the fight make it quite entertaining, yet it is not much of a challenge.

Gohma is the very first boss of The Wind Waker, much like Ocarina of Time’s Gohma. However, this Gohma is much more fire-oriented than the previous incarnation of the arachnid. Residing in the cavern beneath the Spirit of the Sky, Gohma repeatedly torments Valoo by attacking his tail. Link too must use Valoo’s tail to his advantage, swinging back and forth between platforms in order to make the roof collapse on Gohma. The boss fight makes great use of the grappling hook, an item that is already fun to use outside of battle. The atmosphere and use of the grappling hook turn a typical Gohma into a memorable first boss battle that sets the tone for the rest of the game.

After traversing the Forsaken Fortress for a second time, Link faces the Helmaroc King, the bird that kidnapped his sister. After rescuing Aryll, the player is forced into an escape sequence where they must avoid rising water and the Helmaroc King. The battle itself takes place on top of a tower, where the Helmaroc King attacks from the sky and must be defeated through the use of the Skull Hammer. Besides the battle against Ganondorf, the Helmaroc King’s battle is the most personal and has the most story behind it. After spending so long trying to save Aryll, Link and probably the player as well are glad that they get the chance to destroy the Helmaroc King and prevent it from kidnapping any other long-eared girls. It can be very satisfying to destroy the mask of the bird that set off the entire plot of The Wind Waker.

Phantom Ganon is technically a mini boss, but he is easily the most memorable boss of Wind Waker. First fought in the Forsaken Fortress, Phantom Ganon requires Link to engage in a game of dead man’s volley, a classic Zelda strategy of hitting an enemy’s magic attacks back at them. The battle can actually be quite hard, and its difficulty only increases by the time it is fought in Ganon’s Castle, where four illusions of it attack as well. Despite using a well-known Zelda strategy, Phantom Ganon’s design and the atmosphere of both fights allow it to shine as one of The Wind Waker’s best battles. Out of all of the bosses in The Legend of Zelda: The Wind Waker, Phantom Ganon was chosen to represent the game in Hyrule Warriors, likely because of its memorability and entertaining fight.

Puppet Ganon serves as a prelude to the true final fight against Ganondorf. This puppet has three forms: a boar-like creature resembling Ganon, a spider form, and a form that resembles Moldorm. The Moldorm form especially is extremely difficult, just like previous battles against the true Moldorm in the series. The boar and spider forms are not easy either, and the fact that all three battles occur back-to-back only makes it harder for the player once they reach the final Moldorm phase. It is essentially three separate boss fights in one. This battle is truly a test of strength and skill before Link moves onto the most powerful being in the world of The Wind Waker. Once the player defeats all three forms of Puppet Ganon, they will feel as though they can take on the final boss.

The king of evil himself, Ganondorf, returns as the final boss once again. While Link takes Ganondorf on in a sword fight, Zelda stands back and attacks with light arrows. This is one of few times Zelda truly participates in a fight and manages to hold her own against Ganondorf for quite some time until she is knocked unconscious. Link and Zelda feel like a true team, with Link attacking up close and Zelda providing support from afar. While the two of them working together is one of the highlights of the battle, the best part is that Link must use the parry attack he learned all the way back on Outset Island to defeat Ganondorf. The game comes full-circle in this way; the skill taught to Link when he was an ordinary boy is now the skill that is required to defeat the game’s greatest villain.

The events leading up to the final battle only enhance the impact of this fight. The Wind Waker’s incarnation of Ganondorf is one of the most beloved because his motivations are explored prior to the battle. The player may even feel sympathy for him, but knows that his defeat is vital to maintaining peace in the Great Sea. As water surrounds the three holders of the Triforce, Link stabs Ganondorf in the forehead. However, before the Gerudo perishes, he says he can feel the wind that once blew in the harsh desert he grew up in. This not only calls back to his story, but also ties in nicely with the themes and name of the game. The final battle in its entirety serves as the perfect ending for The Legend of Zelda: The Wind Waker, as well as the perfect end for Ganon in this timeline.