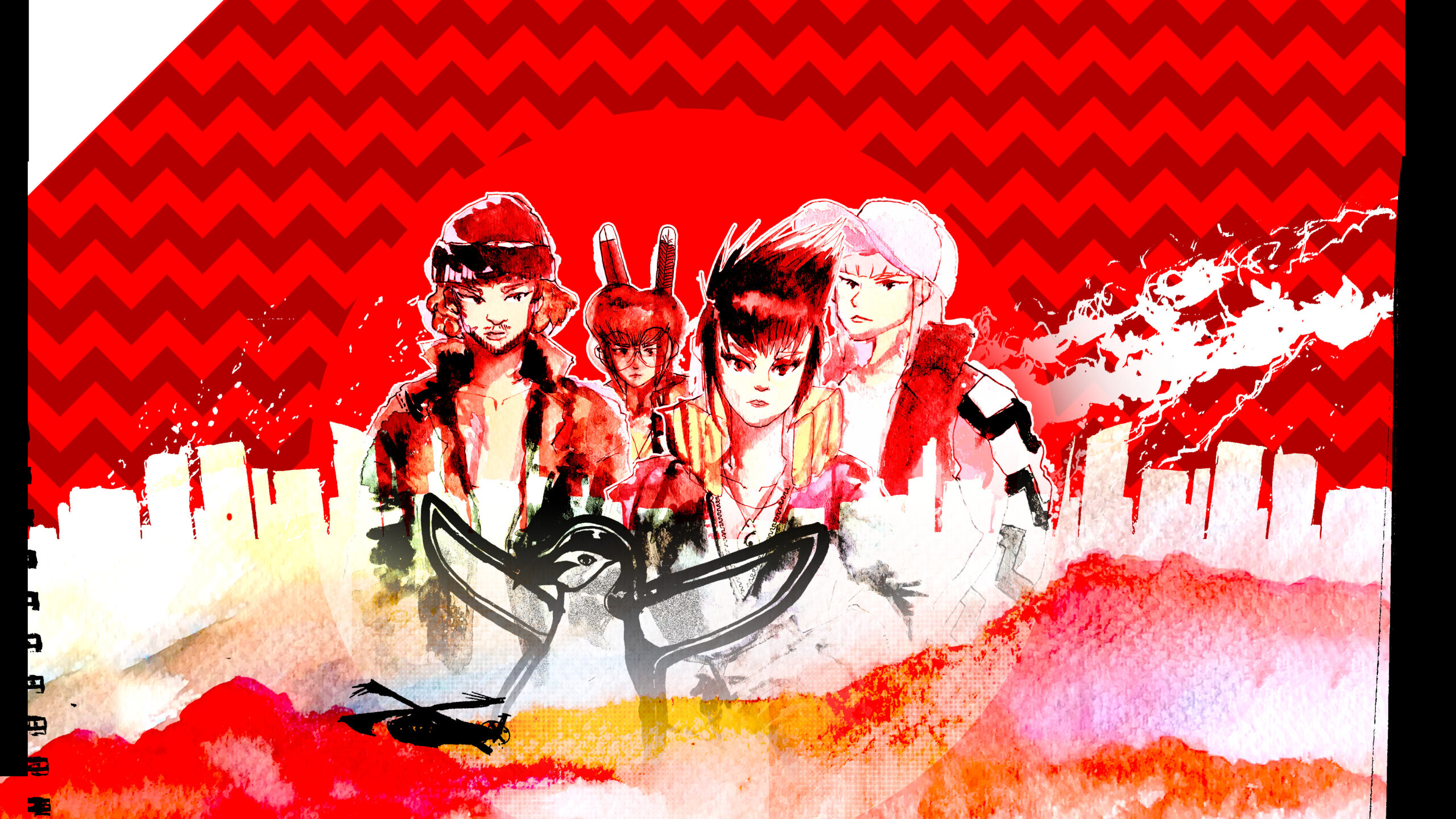 COPS COME HERE TO KILL US

I DONT NEED PERMISSION TO NOT DIE

There is nothing on Nintendo Switch as brash or bold as the graffiti splattered throughout Umurangi Generation. Set in the near future, this title by Origami Digital tasks players with photographing the world around them as things go from bad to worse. Purposefully polygonal, this independent game is a razor-sharp criticism of centrist ideology and a stunning reminder that having a point of view can lead to art that is both confrontational and exciting. Packed full of immersive, intriguing worldbuilding and scored by a pulse-pounding soundtrack, Umurangi Generation is an utterly unique experience.

Photography games are a niche genre, but have enjoyed some notable recent success on the Switch. New Pokémon Snap is a hit, and there even accessories that make taking photos even more exciting. But Umurangi Generation is similar to New Pokémon Snap only in that the player character wields a camera. Rather than an on-rails experience where the player snaps pictures of adorable creatures living it up in the wild, Umurangi Generation is all about the setting. This is the rare game where the mechanics fully interweave with that oft-overused term, environmental storytelling. The world demands to be not only explored and looked at, but critically appraised through the lens of a camera.

On the surface, Umurangi Generation feels simple enough. The player explores the world in a first-person perspective, taking pictures all over rooftops, train cars, bars, and city streets as a courier for the Tauranga Express. Each distinct level has photographic bounties to complete. There are simple objectives, like taking pictures of specific subjects, and more complicated tasks that require spatial reasoning and thinking outside the box. As the player progresses through the game, they gain access to more lenses and tools that open the floodgates for more interesting photos. The telephoto, wide angle, and fisheye lenses let players take photos from several different angles and positions, and provide more tools with which to see the world.

But it’s the details that set Umurangi Generation apart. There are no cutscenes, no dialogue, no item descriptions or audio logs. Instead, environmental storytelling is used in the purest possible sense. Rather than anything directly didactic, the world is the story. Players use the mechanics provided to them (photography and exploration) and from there, are left to draw their own conclusions. Every level is packed full of information, if the player is willing to spend the time to look around and immerse themselves.

To progress to the next stage, players must fulfill a set of bounties, generally taking a photographic with specific subjects in the frame. While there are bonuses for completing the bounties on a stage within a certain time limit, there are no penalties for failing to do so. There are bonus objectives on every stage that require intimate knowledge of every advertisement, helmet, and piece of street art strewn throughout each blasted environment. Fulfilling these bonus objectives feels incredibly satisfying, not only because the equipment awarded is helpful and gives players ever more editing options for future photos, but because it means the player has taken the world in. The world of Umurangi Generation may be tumultuous and oppressive but it also feels alive. Observing and recording that liveliness is unexpectedly empowering and exciting.

Umurangi Generation is a forward-thinking throwback. It deftly mixes retro aesthetics with an anticapitalistic, scathingly acidic worldview. Imagine Jet Set Radio mashed together with Neon Genesis Evangelion plus a dash of Disco Elyisium. This game is unapologetic in how it forces players to confront ideas in its setting, and how confronting them makes the player feel. To say Umurangi Generation is bold is an understatement. The game feels borne out of a sense of helplessness and frustration, and by the time the credits roll, Umurangi Generation shakes players by the collar and begs them to wake up and do something.

It can be difficult to parse just what exactly the state of the world is in the first few levels. But careful exploration reveal a society that’s been transformed into a militarized police state under the guise of safety. The military has swooped in, set up shop, and has taken it upon themselves to restore order in a world gone mad. But what does the rest of the world look like? How do the youth act when told to shut up, sit down, and hang tight?

Players can see for themselves. Punks dance in the streets, tear down posters, spray-paint walls, and try to live their lives. Life goes on, even in the face of the apocalypse. Because after a few levels of careful exploration and observation, players are confronted with the truth: a kaiju invasion, on a devastating scale. Things will never be the same, and Umurangi Generation asks players how they feel about that. Instead of letting them pilot the giant mechs that defend the cities or step into the boots of a U.N. soldier to fire back on the monsters emerging from the sea, players are asked to immortalize events through a different kind of shooting.

The Nintendo Switch version of Umurangi Generation includes the Macro DLC, an additional set of four levels that further define the world. Each level is a different slice of society. Gamer’s Palace, a virtual reality bar full of temptations, delights, and distractions is a highlight, but the following three areas hit harder. The Hangar lets players see the ironically-named Peace Sentinel up close. From its shiny machine guns to the exhausted maintenance workers who patch up the hulking robot’s damaged frame, the stage is a masterpiece of dialogue-free worldbuilding. The Depths level feels like it deserves its own spinoff game. Dedicated to the “first wave veterans” who lived through the first kaiju assault and now live in the sewers, the photographic bounties in the Depths force players to closely look at how these soldiers have been discarded and forgotten.

But the final stage, the Underground City, is by far the most harrowing. Players are dropped into the middle of an anti-U.N. demonstration, and the objectives are centered around documenting tools of oppression like tear gas grenades and riot shields. In previous stages the game penalizes players for taking pictures of jellyfish, which are leftover detritus from previous invasions; in this level, penalties are incurred from taking pictures of the faces of protestors. The implications are clear: the Tauranga Express, or whatever outlet the player is working for, does not want to be complicit in helping cops capture protestors. Graffiti in this level feels urgent, charged:

PICK A SIDE OR DIE

Seeing a strong point of view in a video game shouldn’t feel revolutionary, and yet, it does here. Within the fiction of Umurangi Generation this stage makes perfect sense, but the themes reverberate outside of the game, too. It feels relevant and daring to make a game that deals with the end of the world but focuses on the average person instead of a super soldier. Furthermore, the game does not make the press out to be heroes; photography is simply one more way to fight oppression. The player will walk away from this game wanting to take direct action. Whether that is through photography, making a video game or other art, or peaceful protest in the streets, Umurangi Generation wants players to get out and do.

Even for players with zero interest in photography, there is much to love in Umurangi Generation. The worldbuilding is exquisite, and the Nintendo Switch version is full of novel ideas that make use of the unique features of the system. Its graphics and style might not gel with some players, but the soundtrack and replayability make it feel wonderfully dense. Photography is a skill like any other, but this title provides players tools to learn the craft and develop their own style.

In the credits, the developers leave a note: “Dedicated to the Umurangi Generation/ The last generation who has to watch the world die.” In a bleak world, full as it is of unrest, strife, and rage, there is hope that things will get better. Games like this will undoubtedly inspire others to make art that is radical and expressive. Umurangi Generation is one-of-a-kind, a deeply satisfying, provocative experience.