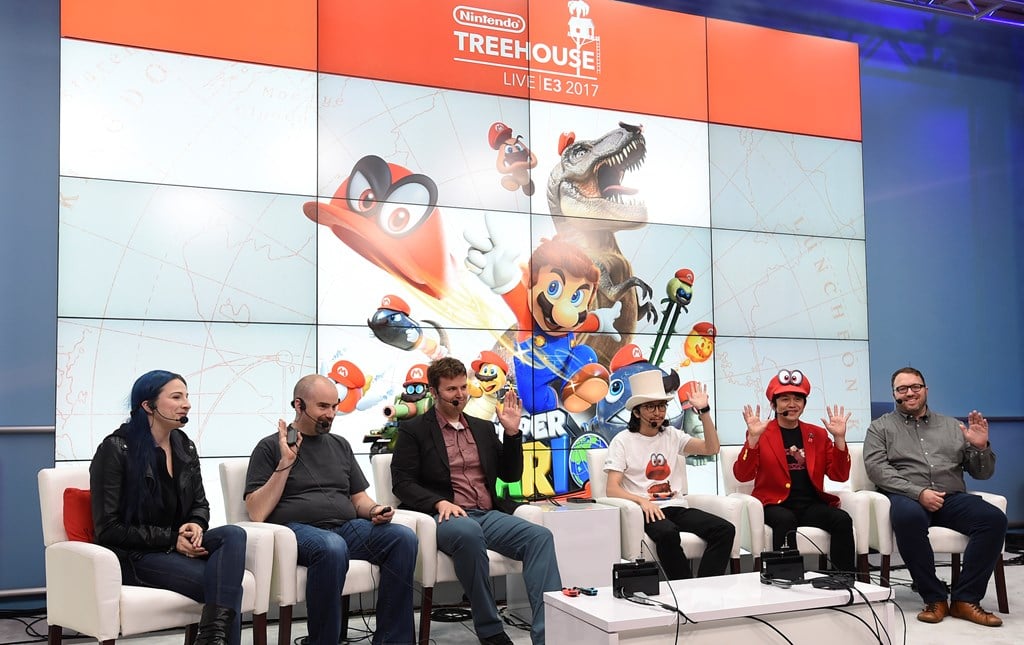 Nintendo stepped up to E3 2017 with typically low expectations. They appeared to keep the expectations low right up until the Nintendo Spotlight, where they created their own version of mass hysteria with some surprising announcements. Of those surprises, Metroid Prime 4 and a Pokémon RPG game (probably generation eight) announced by the CEO of the Pokémon Company, Tsunekazu Ishihara, will not feature in this article as there wasn’t any gameplay shown for the games. Fortunately, there were other exciting announcements that have stunned the team at Goomba Stomp – so here are our top five Nintendo games announced at E3 2017.

There’s a distinct lack of narrative-focused games on the Switch right now. Discounting Disgaea 5 Complete—a game that focuses much more on its strong strategic gameplay than its overarching narrative—Switch owners really only have I Am Setsuna in the way of story-based games. This is precisely why Xenoblade Chronicles 2 will be such a welcome addition to the console’s library later this year. The original Xenoblade Chronicles was something of a hidden gem on the Wii, and is considered by many to be one of the greatest JRPGs ever made due to its masterful storytelling, persistent world and sheer scope. Meanwhile, the Wii U spinoff Xenoblade Chronicles X focused much more on exploration and combat than story. What we’ve seen of XC2 so far suggests a combination of the two.

I’m incredibly excited to learn the story Monolith has crafted this time. The Spotlight hints at a heartfelt story between Rex and Pyra as they travel and fight in search of Pyra’s home, a paradise known as Elysium. The cinematics look gorgeous and the story feels familiar yet intriguing. Yet, if there was one thing the original game lacked, it was a refined combat system. The developers revealed that XC2 has been built on the back of X’s engine, so I’m expecting it to benefit from some truly vast environments and even more refined combat. If I had one worry it’d be that the game still stutters along a bit, and there was noticeable pop-in during the Treehouse presentation. Hopefully the team has enough time to iron out some of the kinks before the game’s Holiday 2017 release. (Brent Middleton)

One of the biggest surprises to come from Nintendo this year at E3 was Metroid: Samus Returns. Unlike last year’s Metroid Prime Federation Force, this is a full-fledged, sidescrolling Metroid game – and the first proper Metroid game in seven years (not to mention the first side-scrolling installment since 2004). Described as a reimagining of the classic Game Boy installment Metroid II, Metroid: Samus Returns sees our favourite bounty hunter travel to planet SR-388 to exterminate the titular alien species.

This isn’t the first remake of a Metroid game: Metroid: Zero Mission revisited the original NES game, adding a similar set of moves, upgrades, boss battles, map features, and even new areas to explore. If you haven’t played Zero Mission, you really should because the game is one of the very best in the series and I would go so far as to say one of the very best games Nintendo has ever made. Metroid: Samus Returns looks just as good since all of the fundamental design is the same but this time around Samus will have new abilities which include a melee counter, and plenty of divergent paths and bosses to take on.

While the original Game Boy game is fondly remembered, it’s dated black and white graphics won’t appeal to this generation of gamers. And given that the story of Metroid II is integral to the series, I couldn’t think of a better title for Nintendo to remake, especially since fans have been clamoring for a remake for quite some time. (Ricky D)

Fire Emblem as a franchise has been gaining a lot of attention recently. The smartphone adaptation, Fire Emblem Heroes, has transitioned from console to mobile with relative ease, regardless of the simplification. After the release of Fire Emblem Echoes: Shadows of Valentia, the momentum has been worth riding, so it’s little surprise that the Warrior franchise would take over the reins.

With a dramatic storyline from the beginning, Fire Emblem Warriors lives up to its name from the beginning. After Hyrule Warriors, which had a slight frame rate drop from multiple creatures on the screen at once, it seems the Nintendo Switch has the power to deal with the overload of enemies that the Warrior franchise delivers. It’s likely that Fire Emblem Warriors can do what Hyrule Warriors couldn’t due to the upgraded console, which boosts a much more dynamic gameplay. Staying as true to the Fire Emblem franchise as possible, the Fire Emblem Warriors will continue the weapon triangle to some degree of purpose. At least, the sword will still be strong against the axe, and so on and so forth.

Fire Emblem Warriors will allow the player to take control of some of their favorite characters, including Marth and Xander. This includes that likelihood of amiibo compatibility, with figurines revealed for Chrom and Tiki. How amiibo will enhance the game isn’t know yet, but for now, we know Fire Emblem Warriors stays true to the Warrior franchise, with intense battling, and some strategic nuance. In many ways, it never really had to leap too far away from the formula to excite fans of both Fire Emblem and Dynasty Warriors. (James Baker)

What is there not to love about Kirby? Our favourite pink blob that eats everything in his path, his ravenous ways have entertained us for over two decades. Without an official title, unless Kirby is its official title, the game still has a lot of secrets yet to reveal. However, with the beautifully colorful gameplay we’ve already seen, Kirby already looks set to be an amazing addition to the Nintendo Switch.

However, Kirby on the Switch has introduced a new mechanic where Kirby can befriend enemies, in which they become either an AI controlled ally, or a multiplayer ally. Each enemy type seems to have their own move once Kirby has befriended them, with the ability to join up with Kirby to create powerful team attacks. With Nintendo’s continued push for local multiplayer on the Switch, Kirby seems designed to exploit the functions of the Joy-Con controller. It’s a creative new way to adapt a franchise that still stays true to its roots.

Always beautiful, and a full palette of colors, the artwork remains as adorable as ever. The animation is always cute, and with the Whispy Woods already shown, we’re going on a familiar journey that has been enhanced for the Switch. It’s impossible to hate Kirby, and without a doubt, this game is going to be one cherubic adventure. (James Baker)

Where do I begin with Super Mario Odyssey? Nintendo ended their spectacular E3 2017 Spotlight with an incredible trailer for Mario’s next mainline adventure, and it was met with overwhelming praise. The trailer showed off one of the game’s main mechanics, as Mario was seen throwing his hat onto enemies and taking control of them. Players will be able to manipulate everything from Goombas to a giant T-Rex, which sounds just as cool as it looks. While this new mechanic looks fun, it was the incredible landscapes, platforming, and general creativity that stole the show during the trailer.

Each of the environments shown off during the three-minute clip looked like it could have been from another video game. There was a gorgeous prehistoric landscape, a sprawling city filled with skyscrapers, a scorched desert with towns and an oasis, and a black and white 1930’s cartoon scene. It’s almost too much to take in at once, especially when the trailer was accompanied by an extremely catchy, fully voiced jazz track.

It’s hard not to be excited about another iteration in the most critically acclaimed series in gaming history. There were so many new and creative ideas on display in this trailer that it’s hard to believe Nintendo EAD Tokyo hasn’t run out of ideas by now. Odyssey is shaping up to be the perfect successor to the Galaxy games, and will hopefully bring in new players as well as cater to longtime fans of the plumber. This could easily be one of the best games on the Switch, and we’re not planning on missing out on this incredible adventure. (Zack Rezac)

E3 2017 has graced audiences with a plethora of memorable announcements and gameplay reveals.  If a game you wanted to see included on this list didn’t make the cut, be sure to check out our other articles on the most anticipated Sony, Nintendo and XBox games as well.  Check back here at Goomba Stomp for more E3 coverage throughout the week.