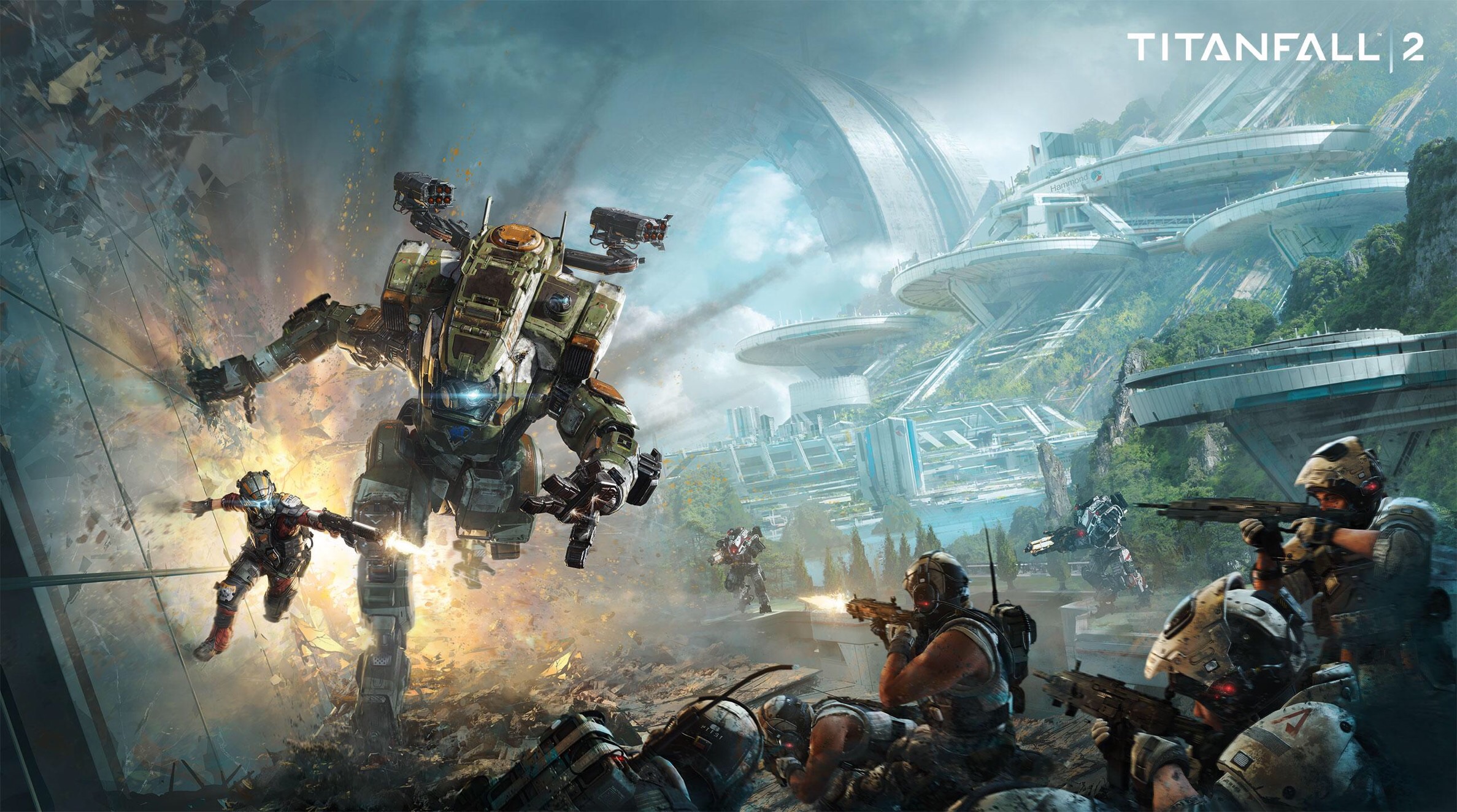 A little ditty about Jack and Ti-tan.

There’s something incredibly thrilling about how combat works in Titanfall 2, how you weave and bob, jumping wall to wall while dodging incoming fire before slingshotting yourself behind enemies and taking them out midair. It presents a sense of flow and elegance that games have been striving to attain for years, in what could be the smartest shooter this year. Titanfall 2, perhaps an inevitable sequel to the well praised yet quickly forgotten original, has shown up its competitors with smart and varied game design, never lingering on one idea for too long before throwing something new into the mix.

When it was announced that Titanfall 2 would feature a campaign this time around, after the numerous complaints about its absence in the first game, it was of concern that it could be a complete throwaway. Wrong is not the word, in fact, the campaign alone makes this installment one of the freshest takes on a tried and tested formula of military shooters; it experiments and in almost every way succeeds. It’s then apt that we start with the one huge way it does fall short: the story.

Unfortunately, the story is a mishmash of homogenized tropes and stereotypical villains. The basic set up is that you, as Jack Cooper are inadvertently placed into the role of piloting a Titan (a big sentient mech) after crash landing on a hostile planet during an incursion. There are bad guys, and you kill the bad guys because they are bad. It’s not exactly Shakespearean and the game bewilderingly takes several hours out of its 6 hours run time to get going. The set of boss characters that you routinely encounter barely have any screen time and it’s hard to care about why they’re there, who they are, or what they are doing.

The plight of trying to stop this evil terraforming force is under-cooked by the lack of specific story segments, the game doesn’t have any cutscenes after or during missions to speak of and the collectibles seem to serve no purpose but to the trophy collectors. In place of this, the writers at Respawn Entertainment have focused more on the bond between Jack and BT, his assigned Titan companion (not the UK based landline company, easy to mix them). Even here, the writing falls short of building any sort of connection, relying heavily on repeated gags and one-liners that all boil down to ‘BT is a robot that doesn’t understand human emotions like sarcasm, ha ha, laugh at the funniness’. It runs the line of not being humorously bad or genuinely witty and instead is often just awkward, in the same way, you pretend to laugh at your friend’s jokes about the decline of humanity; it’s just not funny anymore.

Therefore it’s fortunate then that the story is not where the majority of ambition lies; level design and tight controls offer an exhilarating experience that more than makes up for the faults of the plot. There’s no surprise that the studio, home to a list of ex-Call of Duty developers, know how to create an insanely polished and impeccably crafted singleplayer experience.

The pedigree with the genre is on full display within the first level of the game, placing you into a training exercise with a leaderboard of times from fellow allies. Unlike Modern Warfare, however, this isn’t merely a boots on ground shooter and the game oozes with illicit joy by taking something you think you know and instead twisting it sideways until now you’re on the wall. Combat is fast and fluid, the game encourages constant movement, transitioning from the ground to wall running is seamless and doesn’t ever limit the ability to fire back at foes.

On a level by level basis, the game introduces new abilities with a myriad of ways to make every encounter feel like the most engaging action scene from a film. Without spoiling bespoke level ideas, the imagination on display in both the aesthetics and concepts of design create vivid, memorable snapshots of unbridled joy. All of these strengths are carried directly into multiplayer as well. 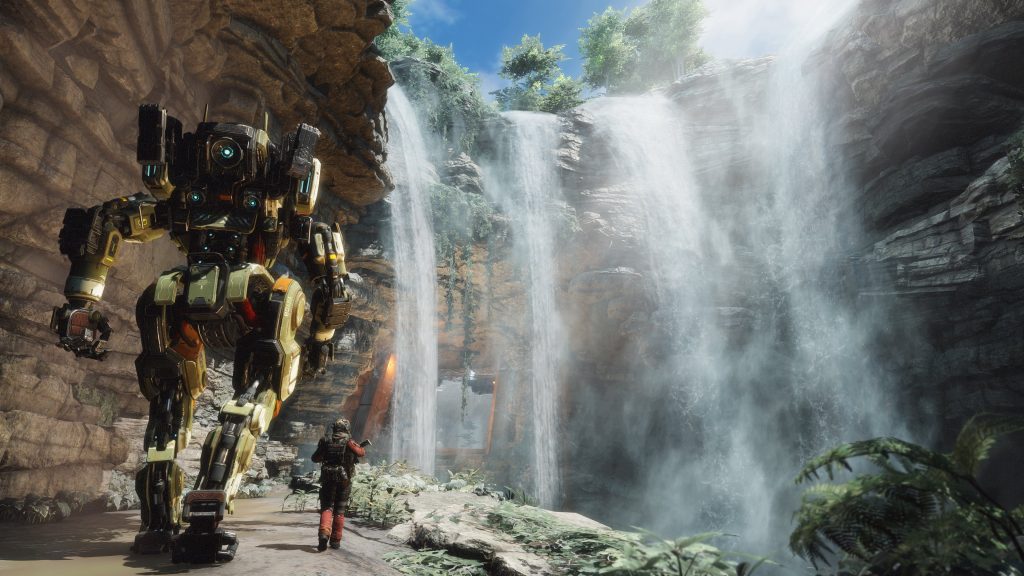 A selection of interesting and unique weaponry gives justification for each guns existence, being more than just a different set of stat numbers. One assault rifle perpetually increases its rate of fire as you continue to shoot, there’s a sniper rifle that fires two shots side by side simultaneously and the infamous pistol that locks onto enemies within your field of view.

It would be prudent not to talk about the game’s namesake, the Titans, themselves offering a wide selection of abilities and ordinance. Within the Campaign, you can come across new “kits” to interchange BT’s arsenal, whereas in multiplayer you choose before entering a match which Titan class you wish to be able to spawn in. Personal preference will take over whether you prefer the speed and agility of playing as the pilot or the firepower and strength of the Titans. After playing as a pilot, though, it does feel rather sluggish transitioning into the much slower, grounded Titan where combat engagements, particularly in multiplayer, often resort to strafing left and right while taking potshots at rival Titans. Similarly, the campaign is much stronger when out of BT, a somewhat self-knowing admission in consideration to the amount of excuses the game throws up to separate Jack and BT. During multiplayer spawning your Titan acts as a reward, unfortunately, some maps are much better suited for Titan gameplay than others which can act as a hindrance in both cases. Some games often resort to one team just dominating with a whole group of Titans while the other struggles to make any headway in taking objectives.

Multiplayer errs more on the side of twitch reflexes than teamwork or tactical strategies, therefore some gamers will be put off or struggle with the almost mechanical hand-eye coordination and consistent alertness that the game demands. If you’re not taking advantage of the parkour level of movement death can, and often will come from any direction. The steep learning curve will obfuscate new players. Matchmaking to similar skill levels can be patchy at best and the current player base is worryingly narrow, with current news of disappointing sales bringing into question the game’s longevity.

The multiplayer’s progression for unlocks can be slow; most weapons are locked and require either a decent amount of leveling or the use of a stingy in-game currency to access. A small point but one that is of some frustration involves the limitation of visual customization early on, as some options are unlocked through a random reward.

The eclectic range of environments favour wide outdoor areas in map design as opposed to tight corridors (of which is much more regular in the campaign), allowing the combat spaces to breathe and with the relatively limited player count at 16, nothing ever becomes too hectic or overcrowded. Maps are well designed and offer a wide range of verticality, with interesting and lush environments.

Visually the game has some brilliant art direction with great use of an intense and varied colour palette. From a technical standpoint, the game runs well and stable, though it does lack detail in various regards, especially with character models and facial animation being unrefined.

Titanfall 2 has given the series its identity, being the follow-up season to the Pilot of the first game. It builds upon everything while adding an essential shooter campaign, filled with smart platforming, instant gratification combat, and impeccably paced set pieces. Shooters are a dime a dozen, it’s hard for one to stand apart from the rest without alienating genre fans, but Titanfall 2 stands confidently even in the face of other larger, titan-like releases this holiday season. Titanfall 2 deserves to be successful, something that, in the current climate of its release appears unlikely. But success, success is never only measured by numbers.