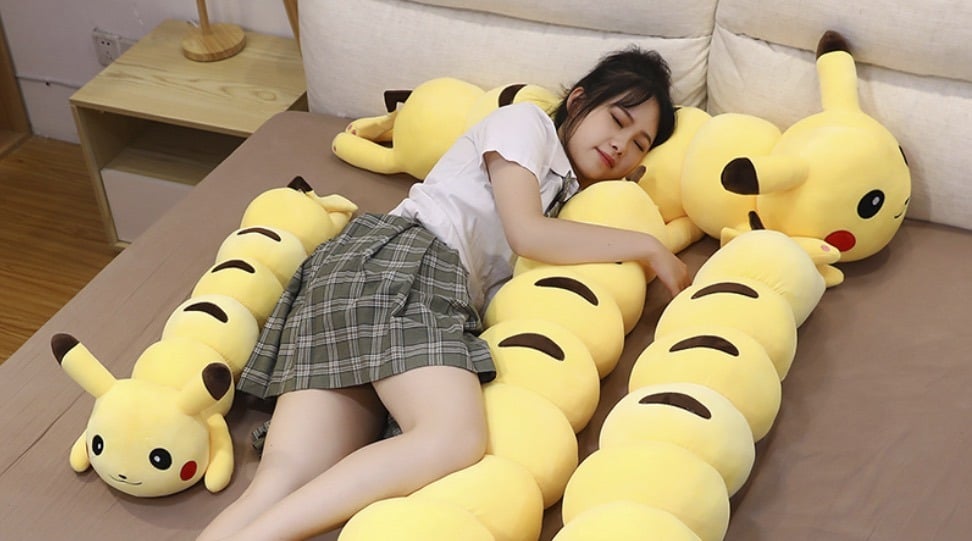 At this point, I’m starting to think I should make a fully-fledged series of weird Pokémon plushies or just weird plushies in general. I’ve discussed the Gengar “Tongue Bed”, the Metapod Sleeping Bag and the Gigantamax Meowth plushs in the past. As odd as these cuddly toys are, they at least have some logic about them. Gengar is a Ghost type Pokémon who has a rather large, creepy tongue so as weird as it might be, a tongue bed makes some sense. Metapod is a somewhat static Pokémon who just kind of falls down a lot so a sleeping bag has some semblance of logic there. The Gigantamax Meowth is an actual form that appears in Pokémon Sword and Shield, peculiar long body and all. They are strange choices but they make some sense. The plush I’m talking about today however…it makes no sense. There is no reason for it to exist. Yet, here it is. Let’s take a look at the Pikachu Caterpillar Plush.

The Pikachu Caterpillar is…well it is basically just that. A Pikachu if it was a freaky caterpillar hybrid. Truly the stuff of nightmares.  The translated description of the item from the website it is being sold on is just as bizarre, “Very long pikachued insect elf plush toy cute anime cartoon pillow plush toy yellow decoration Christmas gift for kids.” Where the heck did elf come from?? Did I miss something? And Pikachued is most certainly not word. I am just so creeped out by this weird amalgamation of Pokémon and insect. Why does this exist? There are so many cute things that could be done with Pokémon cuddly toys so why would you choose to make a caterpillar Pikachu?? WHY IS THIS A THING?

This plush comes courtesy of the Japanese version of Ali Express and according to the website, it can cost between $9.35 and $86.39. It comes in four different sizes: 85cm, 1.1m, 1.4 m or 1.7m. There have been around 96 orders of the freaky plushies so far and it has five stars from sixteen reviews so…I guess that’s good? Maybe I shouldn’t be so hard on this monstrosity. The model in the pictures seems to like it at least. I said it before and I’ll say it again; whatever they are paying these models is not enough. If you would want to actually buy this thing, check it out on the link here.