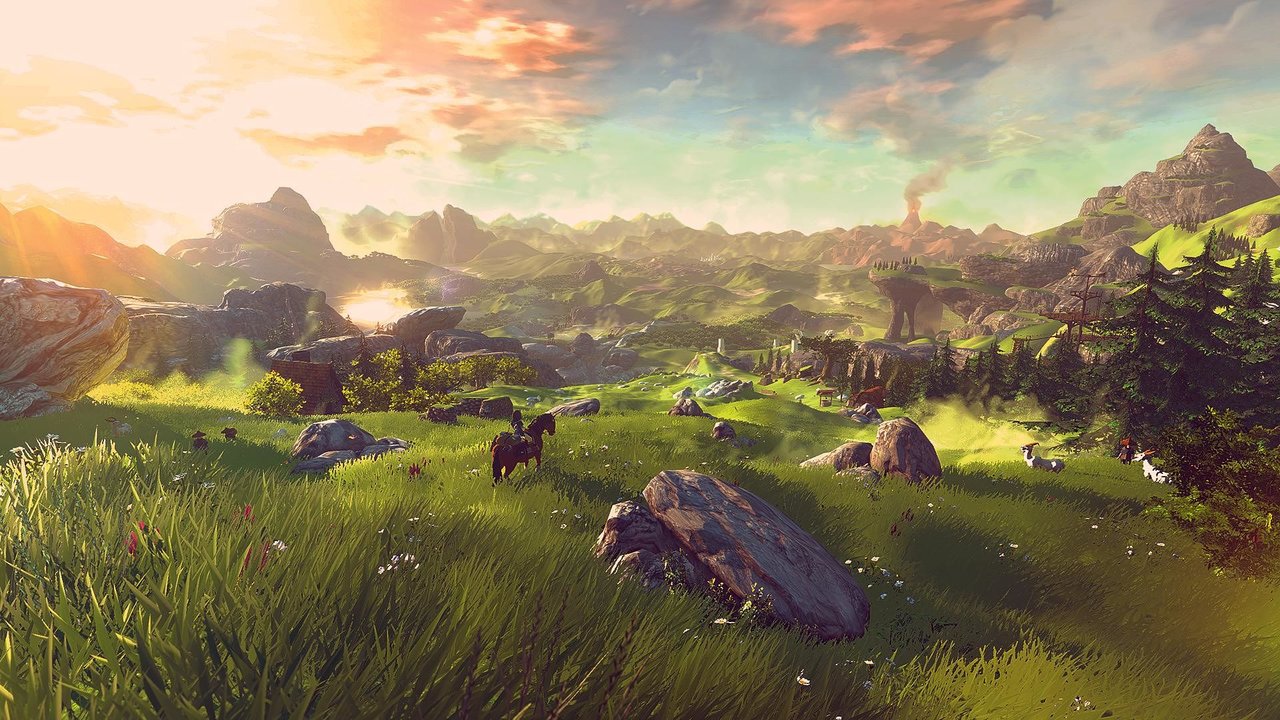 I admit, when Nintendo first announced that their E3 presence would be almost solely focused on the upcoming Legend of Zelda game, I was skeptical at first. Could a new entry in the longstanding Zelda franchise really differentiate itself enough to warrant so much time dedicated to it in a year where Nintendo is in dire need of more games? While I still hold my reservations of the company’s future plans in terms of third party backing and supporting the Wii U console, I can say beyond a shadow of a doubt that The Legend of Zelda: Breath of the Wild is the most daring and ambitious game that Nintendo has shown off in years. As one of the pillars of gaming, The Legend of Zelda series has been characterized by its ability to consistently provide gamers with an expansive world filled with adventure, while simultaneously making each entry in the series feel unique in its own right. Landmark titles such as A Link to the Past and Ocarina of Time brought dramatic changes to the franchise with more lively worlds and fully 3D environments, while other sequels like Majora’s Mask and Wind Waker utilized more subtle twists like darker, character-based storytelling and sea travel to set themselves apart from the pack. Potentially due to the massive fan outcry that the series had become too streamlined, game director Hidemaro Fujibayashi has made the bold decision to take the series forward by returning to its roots, breathing new life into Nintendo’s impending exclusive.

Heavily inspired by his passion for the original The Legend of Zelda, Fujibayashi has forgone the linear progression and player hand-holding of recent games such as Twilight Princess and Skyward Sword in favor of an emphasis on exploration, discovery and player choice. The beginning moments of the live gameplay demo see Link awaken in a mysterious chamber called the Shrine of Resurrection, before equipping him with a few items and sending him loose to explore the world at his leisure. Within seconds, it becomes clear just how much has changed, from the game’s structure to its movement and combat. Adding to the stamina bar that Skyward Sword implemented, Link can now climb objects and jump over obstacles, making the game more movement based and fluid than ever. Every temple, tree, and mountain are fully scalable, featuring plenty of secrets, hidden paths and beautiful vistas across the game world. The area shown in the current demos, The Great Plateau, showcased the game’s interactive environments and enemies, as numerous Bokoblin encampments and caves of monsters stood in our hero’s path. These groups of monsters could be taken out in more creative ways than ever before, allowing stealth approaches by sneaking through foliage and sniping guards with bows (the game now tracks and displays how much noise you’re making), full-on frontal assaults with bombs or even letting nature do your job for you by dislodging precariously placed boulders or starting uncontrollable fires. Expanding on the vastly improved encounters, the combat itself has been significantly reworked, depriving Link of a permanent sword in order to force players to actively alternate between weapons and items during fights. Though games like Wind Waker experimented with the idea of wielding enemy weapons, Breath of the Wild fully commits to the idea, making each weapon handle differently and do varying amounts of damage. Since weapons can be switched on the fly, are able to be thrown as projectiles and degrade over time, inventory management is key and learning the ins-and-outs of axes, spears, pitchforks and clubs is all but required to survive. Taking a page out of Dark Souls’ book, Link can also parry incoming attacks and even enter the bullet-time like “Flurry Rush” mode to rapidly deal crushing blows. All of these aspects combine to make the most tactical and compelling fighting in all of Zelda. 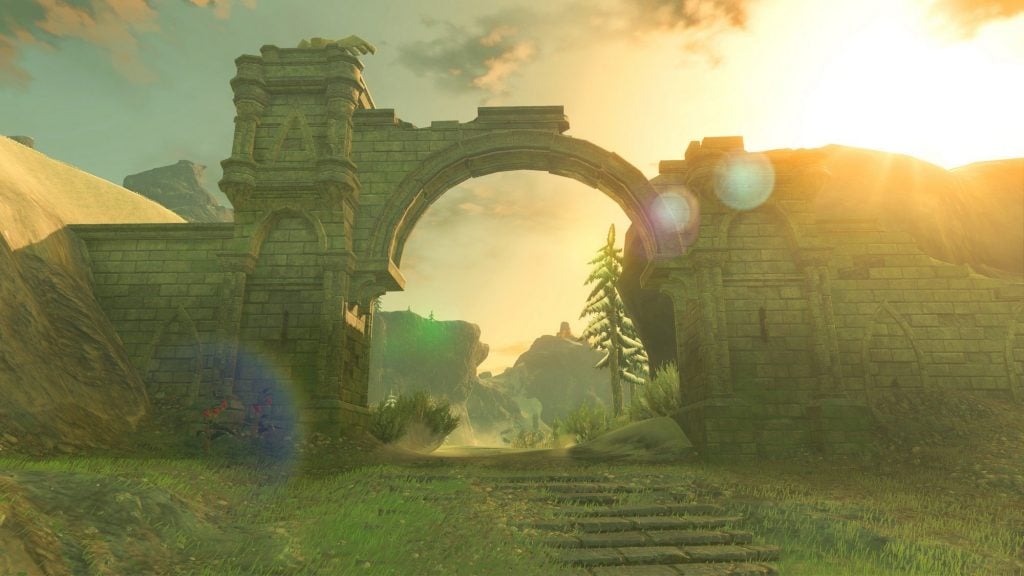 Similar attention to detail has been paid to Link’s outfits, as different armor sets and clothes come with different benefits and stat bonuses. Ocarina of Time and Twilight Princess featured several different outfits for situations where Link needed to explore underwater or traverse fields of fire, but Breath of the Wild has made this a core mechanic of the experience. The iconic green hero’s tunic is bound to appear at some point in the game, but the trailer and demos alone have already dressed Link in everything from full plate armor to a blue tunic that strangely resembles Wind Waker’s initial get up. This leads to another major aspect of the game, body heat, and environmental effects. Going along with the more interactive world of the newest Zelda outing, the environment plays a crucial role in gameplay. Ongoing day and night cycles cause more dangerous enemies, like Stalfos, to emerge from the ground while lesser monster camps sleep, dynamic weather like rain and storms can cause lightning to strike the player’s sword and the temperature is now a constant hazard to the player. Upon entering colder areas, Link must equip heavier clothes, stay close to fires or eat special items, like peppers, to keep warm and not lose health. Many of these items can be created in the newly added cooking system that allows the many mushrooms, berries and vegetables Link scavenges to be combined into meals that can regenerate health, increase resistances or grant Link “yellow hearts” that act as extra health but disappear permanently when lost. Breaking further conventions, random hearts and rupees can no longer be found incidentally inside of pots and patches of grass, incentivizing loot collection to sell for money and cooking to keep healthy.

What’s most exciting about the game is the sheer scope of its world. Although we have yet to see any of the series’ iconic dungeons, the developers have shown off smaller puzzle/combat sections called “Shrines” that litter the world (claims have said there are well over 100 of these but the exact number is unconfirmed.) Completing these mini-expeditions rewards Link with “Spirit Orbs,” which can be used to upgrade items and abilities in the full game. These shrines are characterized by their strange, almost-futuristic aesthetic and their frequent use of the “Eye Symbol,” an icon often associated with the Sheikah tribe of past games. They are likely to play a large role in the story, as the newest item, the “Sheikah Slate,” is prominent throughout the demo. By using the runes found in the Shrines, Link can use new Slate abilities to create detonatable bombs, levitate magnetic materials, create pillars of ice, and much more in the final game. The Slate can come off as a bit gimmicky at times, but I think it’s too early to judge it at this point. Less obtrusively, it can be used to locate enemies and treasure, mark distant locations on the map and gawk at the world’s staggering beauty. Reported to be twelve times as large as Twilight Princess, Hyrule may seem desolate at first, but this is likely to provide a sense of pace to the gameplay and eventually encourage players to use other means as travel such as the raft, the paraglider and eventually animals like horses. Eiji Aonuma has reassured fans that towns and NPCs will be far more prevalent in other areas of the map, and that the sections shown at E3 are meant to evoke similar feelings of desolation and ruin that purveyed the original Zelda game. He has also stated that these themes are meant to contrast the game’s beauty, juxtaposing the colorful, “Japanese animation inspired aesthetics” with the destruction of iconic landmarks such as the Temple of Time. 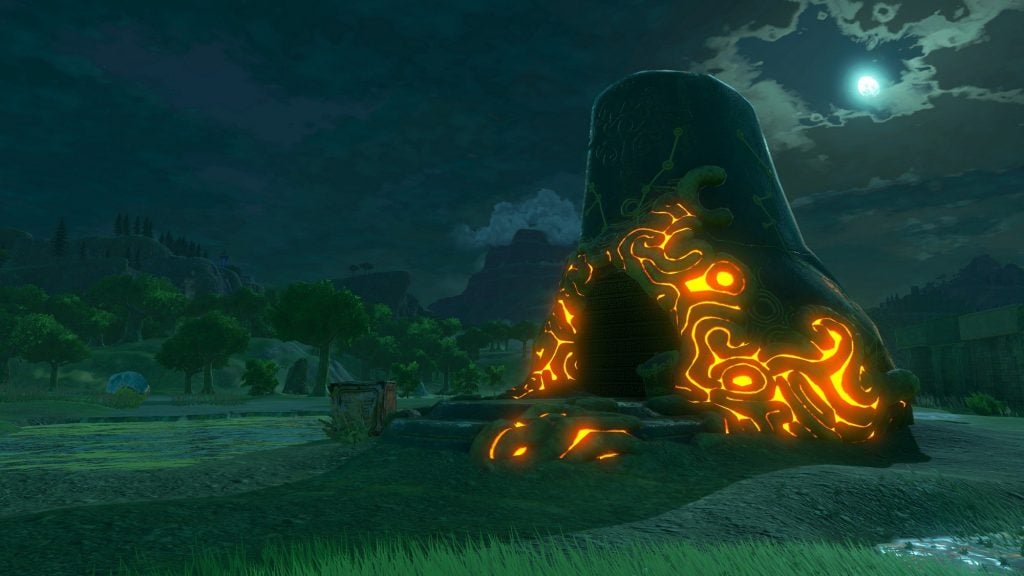 Apart from a few, minute hints and allusions, the story of Breath of the Wild is being kept tightly under wraps by Nintendo, who has stated that they want to keep it a mystery for players to discover on their own. However, this being the internet, the community is bound to speculate the entire plot based on the smallest pieces of insight imaginable. The demo location’s description as “the birthplace of Hyrule” may seem to indicate that the game is set early in the universe’s history, but the surprising emergence of technology, visual allusion to the Wind Waker’s protagonist’s original clothes and the overarching themes of resurrection hint at a much later point in the timeline. The rusted Master Sword that is prominently featured in the title credits, and the name “Breath of the Wild” (hinting at the gradual strengthening of nature) also reaffirm this idea. Ganon is briefly name dropped in the dialogue inside one of the shrines, and the opening voice-over (finally introducing voice acting to the franchise!) assure that the narrative will likely adhere to the similar quest to stop darkness from harnessing the power of the Triforce. After Skyward Sword provided the best characterizations of Link and Zelda yet, I’m excited to see where Nintendo goes with their relationship, and the presence of the Sheikah have me hopeful that Zelda has a more active role in the new game. The only gripes I have with what has been shown so far is that the amiibo uses are somewhat of a cop out and that I’m personally a bit disappointed that the game is focusing more on ambient music than its usual stellar soundtrack (though it is obviously too early to confirm this), but these are nitpicking in the grand scheme of things. With an astounding art direction, massively explorable world and more complex gameplay, I can’t wait to see more of The Legend of Zelda: Breath of the Wild in the coming days. 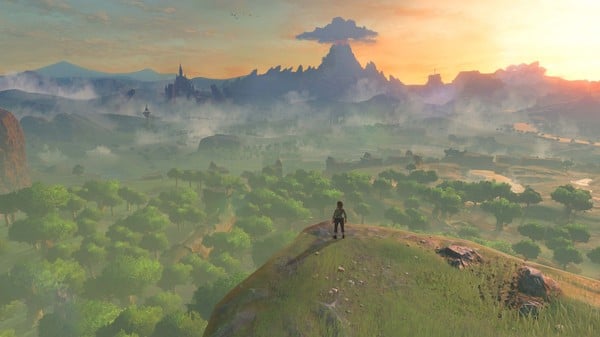