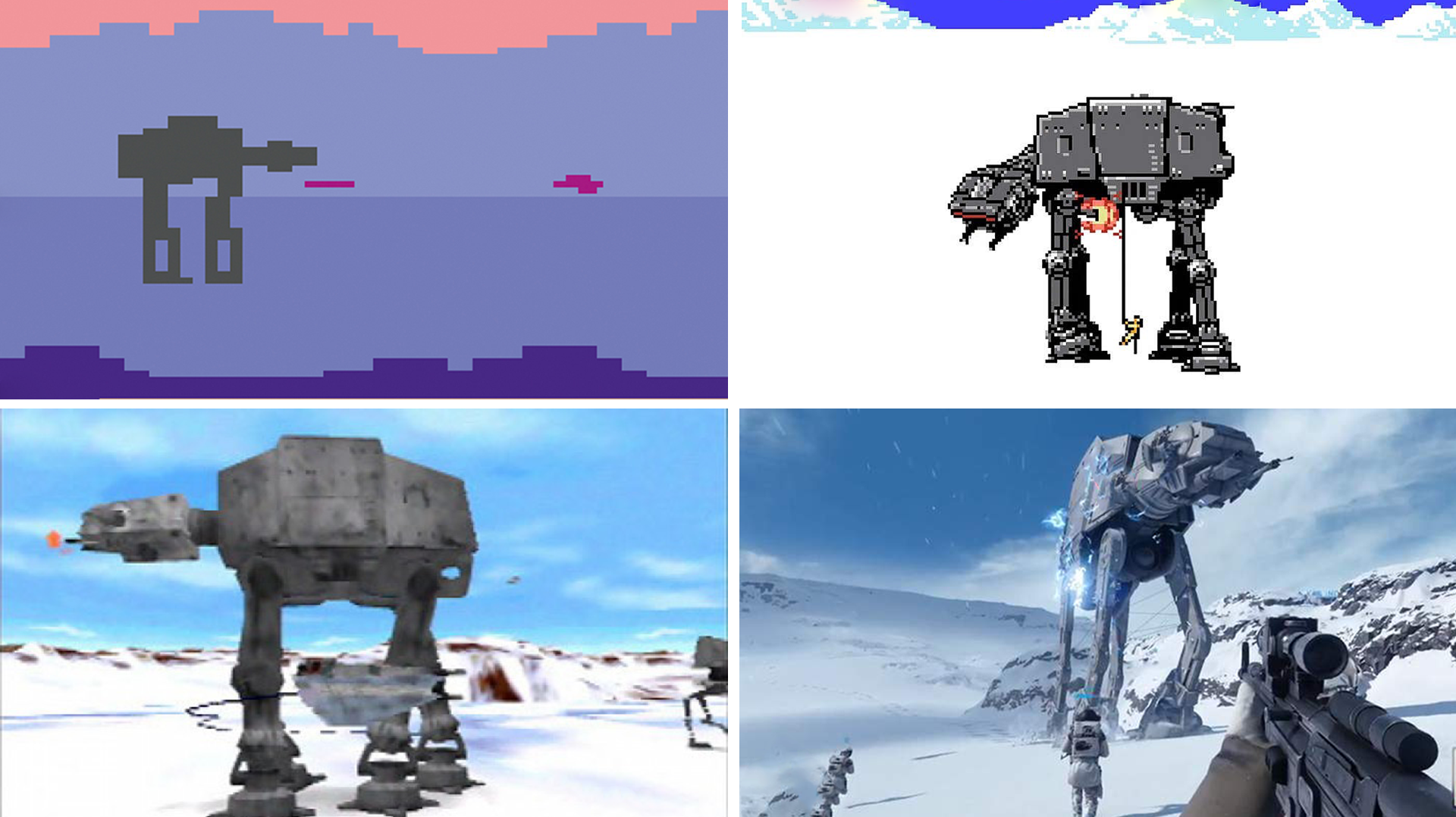 For the numerous corpses of rebel infantry and snowtroopers littered about the frozen tundra, amidst the hollowed-out, smoldering wrecks of AT-AT walkers and snowspeeders, the war is over. For the rest of us, it rages on still, an icy mess of tow cables and tauntauns. There looks to be no end in sight to this conflict, no rest for the weary warriors who soldier on. And why should there be when it’s so much damn fun? The Empire Strikes Back‘s Battle of Hoth has captured the imaginations of gamers for three decades now, and developers aren’t about to stop that. The setting was featured prominently in EA’s footage for Star Wars: Battlefront right from the get-go, and despite having played nearly every version of this famous assault ever available, I still felt that undeniable urge to run right out and spend sixty dollars to experience it yet again.

It’s said that the definition of insanity is doing the same thing over and over again while expecting different results. If that’s the case, here’s the evidence for my committal:

Each one of these games features a Hoth mission of some sort, so needless to say, I’m quite familiar. Unfortunately I never got around to playing the Empire Strikes Back arcade game from 1985, Star Wars: Rebel Assault in 1993, Lego Star Wars II: The Original Trilogy in 2006, or the Hoth expansion in Star Wars: Force Unleashed in 2009, or anything else I’m missing (even that dumb fighting game for the PS1 couldn’t resist setting a stage there), but if I could have I would have. The Battle of Hoth is as ubiquitous as WWII used to be for first-person shooters, only it’s still cool. In a universe that features speederbikes, light saber duels, and Millennium Falcons, why is that? I don’t know. Maybe people really like snow. But also, it could be because this is the one vehicle aspect of the Star Wars movie franchise that developers have been able to consistently nail, especially as of late, a perfect marriage of a recognizable sequence in the film with goals that organically make sense for a video game, alongside controls that feel satisfying enough to keep the player immersed in the moment and stark, eye-popping visuals.

Of course, it hasn’t always been this way. I couldn’t honestly say that the first two games on my list were especially memorable. Licensed games on Atari ranged from mediocre to industry-killing, and the overriding sense of the NES Star Wars titles is bland frustration. It wasn’t until Super Empire Strikes Back that my gaming interest in this snowy fight was piqued. For the first time, I actually felt like I was behind the helm of a speeder, thanks to Mode 7, and the controller had enough button inputs to allow for more than two maneuvers. The progression in enemy types felt more natural and in line with the films, not having to invent baddies or fill the screen with womprats (remember that scene?) in order to keep things exciting. The Hoth sequence used only what we saw in the film; from probe droids and snowtroopers to AT-STs, ending with the boss-like AT-ATs, things could not have been better set up. Sure, it’s a bit unrefined by today’s standards, but this was the spark that made me see the potential.

That promise was realized in the N64’s Shadows of the Empire, where the developers at LucasArts were so proud of their take on Hoth that they made it the very first stage. This was an incredibly smart move, as it was a stunning intro, conveyed in glorious polygons and smooth gameplay, controlling (at the time) like a dream, thanks to the subtleties made possible by the analog stick. That there was a half-decent rest of the game, involving the stock action-hero pilot of a Millennium Falcon rip-off named Dash Rendar running through foggy corridors and clumsily platforming his way to showdowns with both Boba Fett and his own ability to steer a speederbike, was made nearly irrelevant by this masterpiece. Many players (such as myself) would come back to Shadows again and again simply to relive this level, often hitting reset upon completion and ignoring Dash’s further adventures.

Naturally developers took note of this trend, so the decision to base an entire game around the Battle of Hoth mechanics was a no-brainer, with Factor 5 Project Leader Brett Tosti saying “Everybody loved the scene in Shadows of the Empire. That whole scene was actually the genesis for Rogue Squadron because everybody said, ‘why don’t you do a whole game like that?’ So we did.” Rogue Squadron built slightly upon the previous success and expanded the concept to a variety of craft, like X-wings, yet still The Battle of Hoth was a highlight, and so when the sequel appeared on launch day for Nintendo’s new high-powered Gamecube console, no one could feign shock at having to once again fend off invading Imperial Forces. But Rogue Leader still dropped jaws, flipping the hyperdrive switch and delivering the definitive Star Wars vehicular assault. From incredible audio and epic visuals that mimicked the film, to astute attention to the tiniest of details, like waves of tiny enemy troops disembarking from transport ships only to be mowed down by trigger-happy players, Rogue Leader‘s Hoth sequence was a complete sensory experience, made only better by buttery gameplay that led gamers to believe there was a chance to finally turn the tide in favor of the rebel base this time. Anyone who passed on Rogue Leader is missing out not only on the best Battle of Hoth level, but one of the best Star Wars games, period.

So why stop there? Since then, zenith of enthusiasm for piloting a snowspeeder has not waned, and the popularity of the events from the opening act from The Empire Strikes Back has kept these levels as fixtures in many of the franchise’s titles subsequently released. While not every game can be considered a classic, such as Rogue Leader‘s disappointing follow-up, Rebel Strike (that for some reason thought we’d like some inept on-foot missions to go with our perfect aerial attacks), Hoth stages are so often highlights that even failure can be looked back on at least somewhat fondly. Such is the power of that tragic day, the draw of the Rebels’ worst defeat, and so we keep reliving it over and over, and until another scene in a similarly compelling exotic environment can take its place (whaddaya got, Force Awakens?).

The Battle of Hoth captured the imagination of Star Wars fans long ago, and for thirty years we’ve been fighting tirelessly, on tauntauns and in speeders, with tow cables and light sabers, each downed Walker a slim chance that one day the rebels will emerge victorious and change the course of the universe. How many countless Wilhelm screams before we realize the futility? How many more times will Dak prove himself utterly inconsequential? When will the madness stop? For the sake of Star Wars games, here’s hoping that day never comes.