You play as the Devourer, a demon brought back by a mysterious hooded man, who, in his words, only hopes to ‘see that you should both survive’. The Devourer lives vicariously through Puppets, people whose minds and bodies you take over and control.

The game begins with choosing from a selection of heroes to fill in as your “Puppet”. Perhaps you want to assume the role of Kalig, a warrior king murdered by his own son. Maybe Jasker is more your speed, an incomporable archer killed years ago in a massive battle. Or you might prefer Evia, a mage considered to be ‘the last God Empress of Garulia’ slain over three centuries ago.

After escaping your tomb, you journey to the city of Thole. Here in the early game, your quests vary depending on which Puppet you initially took over.

The game has a fascinating mechanic where you phase between the mortal realm and the underworld. Players switch between the Devourer and Puppet in order to get through different areas. Enemies from one side don’t cross over to the other, so it can also be used as a way to catch a breather when things get too hairy. Many things exist on one side of the plane that don’t exist on the other; bridges, doorways, etc. Moving between both worlds is a necessity to make any progress. 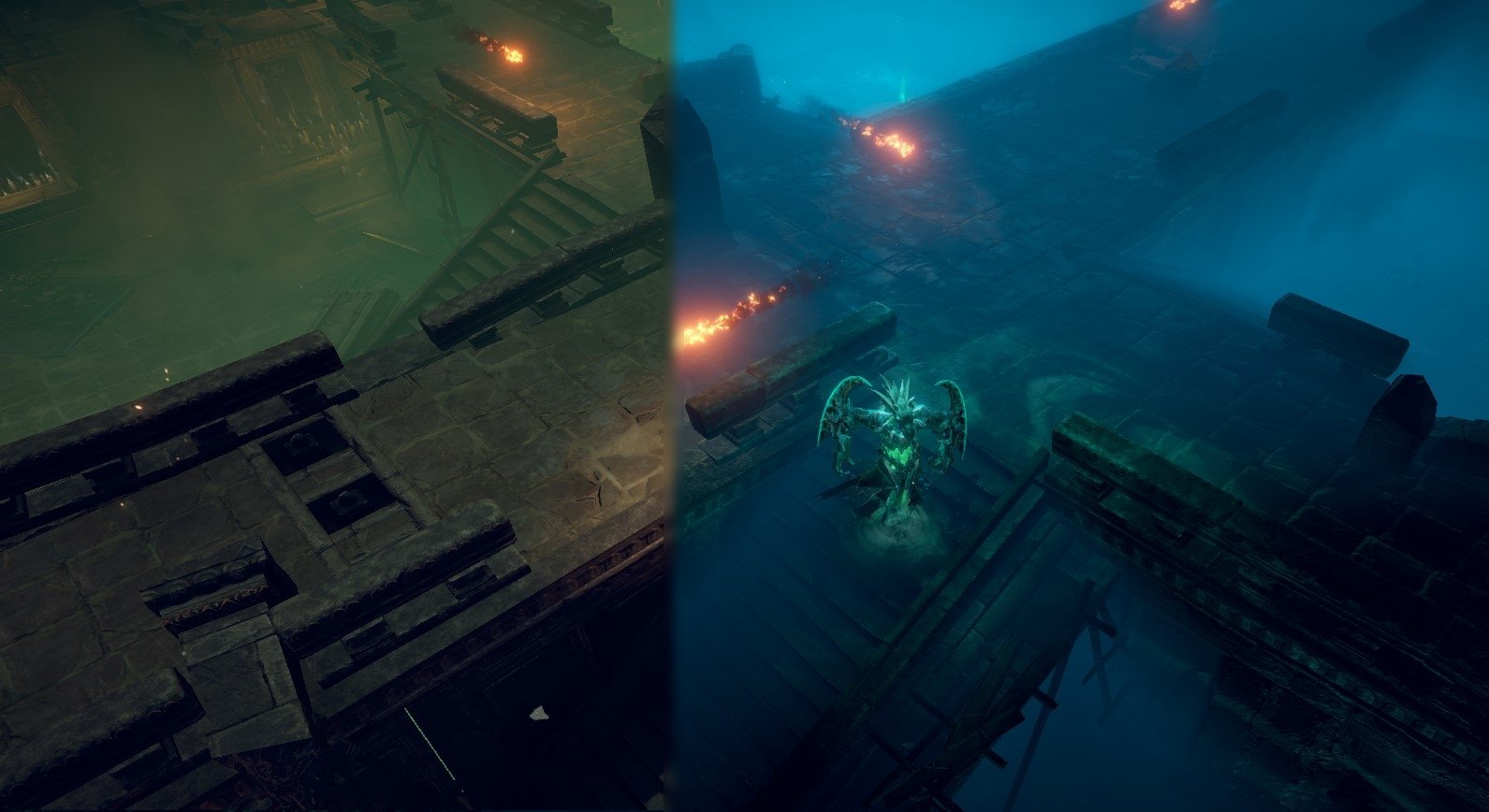 The camera is locked to a single position – you can’t zoom in and out or move it around. However, the game lays things out out well enough that you can use the minimap as a guide if you get lost. There’s also the ability to track quests, so map markers for that quest show up on the screen and the minimap to guide you.

Shadows: Awakening is a ‘standard fare’ action-RPG insofar as movement goes – you click where you want to go, click to attack, and click to interact. It’s easy enough to keep up with, but moving longer distances suffers because you can’t click ON the minimap to move.

Combat in Shadows: Awakening plays quite fluidly. It mostly involves clicking on enemies and activating abilities through assigned keys. Said abilities can upgrade at certain levels, making them more potent as they get stronger.

Progression in terms of levels has some weight to it. After every level up, you can assign points into different categories; strength, agility, endurance, and willpower. These attributes largely explain themselves , with willpower affecting your skill potential. This gives you more range when it comes to building your character, whether they’re a tank, DPS, etc.

The game sports a pleasantly designed UI, with information organized and easily accessible. Cooldown for healing and spells, your inventory count, etc., all of it is laid out well. But the equipment page takes a little getting used to. There’s a lot going on, as far as information about each item, so it can be a bit overwhelming until you understand what everything means. 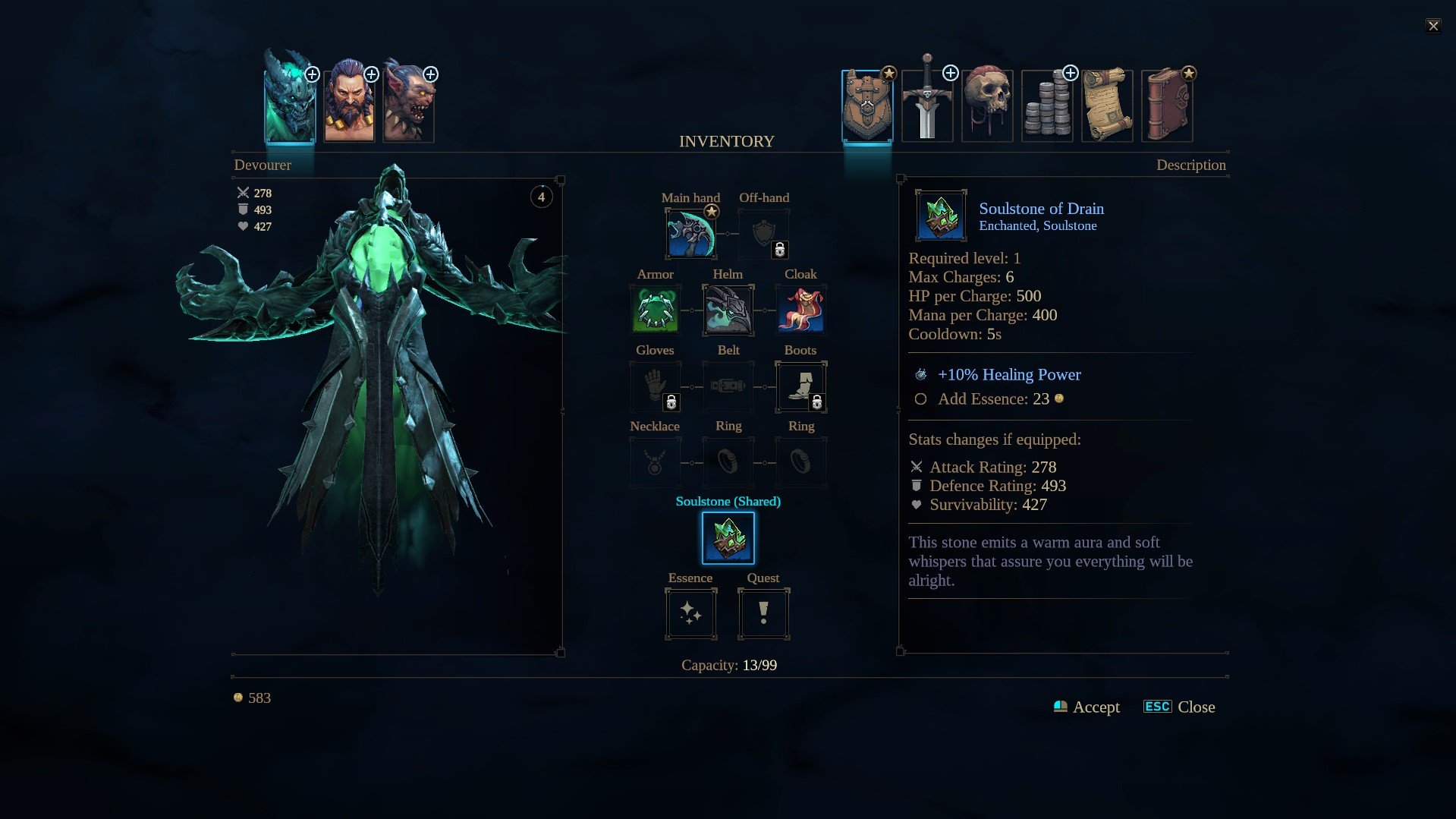 Shadows: Awakening is an incredibly well-designed game and really easy to pick up and play, no matter how much time you have. The save-anytime feature allows you to jump in and out of gameplay session. The voice acting is top notch, though Kalig sounds very much like Shrek, something that was hard to forget after hearing it. Even the NPC’s are well acted, albeit a bit silly at times.

The amount of polish in Shadows: Awakening heralds a fantastic return to the action-RPG era of old. There’s some small, nit-picky stuff, like the minimap issue, or having to return to the quest giver to advance side quests. In the end, they’re negligible and hardly detract from the overall game. If you’re a fan of dungeon crawling, stories of revenge and mystery, and worldbuilding in the same vein as Skyrim, you’ll be in for a treat with Shadows: Awakening.