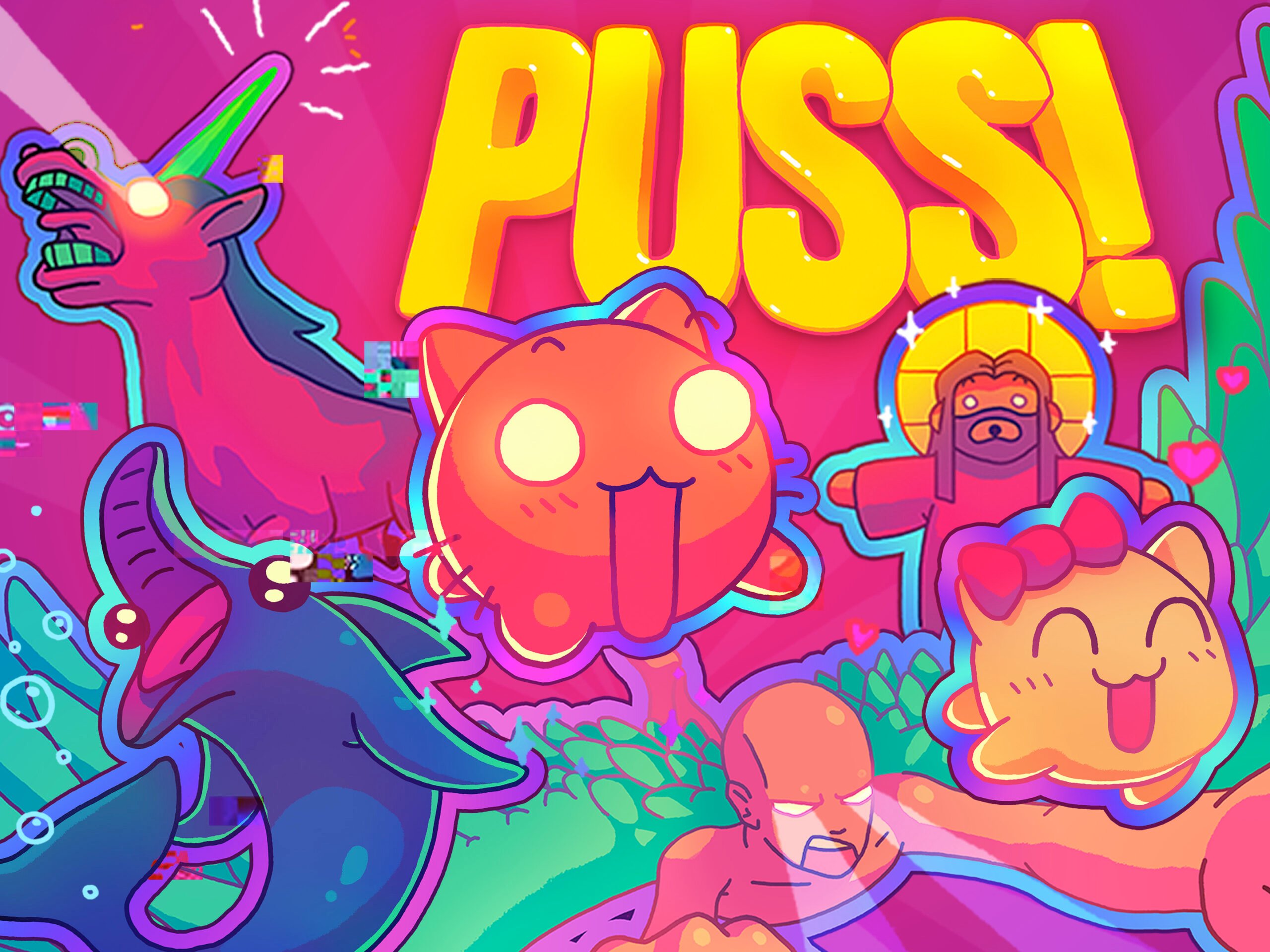 The early days of the internet were something special. Before it became the ubiquitous tool it is today, the online landscape was evolving and shifting at an incredibly rapid pace. PUSS! feels like some kind of dark magic designed to summon memes of the past, when LOLcats ruled the web. A game that alternates between a frustrating acid trip and a hilarious overstimulation of the senses, it’s truly one-of-a-kind.

So what is PUSS! anyway?

For the curious who have seen the trailer but still don’t have a sense of what PUSS! actually is, think of it as the world’s most trippy version of Operation. The game starts off with a live-action teaser where a fluffy ginger cat receives a distress call, Poltergeist-style, from a nearby TV. After getting sucked into the television, the cat must do what they can to find five keys from five guardians and escape their torment. Along the way, they’ll face demonic dogs, backstabbing cultists, a gigantic slot machine, and a nightmare hellscape with a Lisa Frank aesthetic. It’s bizarre, tonally schizophrenic, and strangely engrossing.

Part of the allure is the easy-to-grok, outrageously-difficult-to-master gameplay. Players guide their avatar, an adorable cat face, from an entrance of a stage to an exit, doing everything in their power to avoid edges. Spending more than a split second rubbing up against a wall will take a life, leaving only a smudge of static behind. At the start of each world, the player only has nine lives to spare. Some stages are complicated mazes; others are full of dangerous hazards. Many stages are puzzle rooms, where the player can see where they need to go, but need to work out the how. Worlds are capped off by tough boss fights, where the player must use the skills they’ve learned from avoiding walls and edges to triumph. As they move through each stage, the player has a chance to rack up lives by completing levels quickly and efficiently. Stages are generally short, often beatable in just a few seconds, and zipping through a stage pixel-perfectly almost guarantees that the player will earn an extra life or two.

This may sound like a demanding platformer like Super Meat Boy or N++, but there is no jumping whatsoever. The player view is top-down, and avatars move side-to-side or up and down. On their Steam page, developer teamcoil calls PUSS! an “avoid-em-up,” and that’s as good a descriptor as any. Avoiding hazards in stages becomes increasingly difficult the closer the player gets to a boss, and the bosses themselves are screen-filling, bombastic, mind-melting problems to be dealt with. No matter how many lives the player has stockpiled, beating a boss will almost assuredly see that stock depleted.

Make no mistake: despite all the bleps and mlems, PUSS! is brutally difficult and occasionally disturbing. Part of the experience of PUSS! is coming to a stage that seems simple enough, only to lose a dozen lives and have to restart the world. Basing the player’s score on their level completion speed is perfectly reasonable and ingeniously cruel since most levels can be completed by taking a slow and steady pace. Rushing will almost certainly cause the player to make mistakes. Then again, spending too long in any given level will almost definitely trigger a headache. The visuals are eye-gougingly bright, like a neon dolphin splashed a chrome wave on the screen. Some stages feature rotoscoped cats floating in space or a black void punctuated by bursts of blue light. It’s endlessly creative, in a Lynchian sort of way. Nothing makes sense until taken as a whole; then, the religious iconography colliding with the sounds of a dial-up modem or static feel connected. PUSS! operates on nightmare logic, and it succeeds in unsettling the player.

On Switch, players might be uniquely suited for frustration. There is no easy way to remap the controls, and using the analogue sticks is the only way to move. Experiencing even the slightest bit of drift can result in the loss of many lives. In a precision-based game like this, one small slipup can be the difference between success and failure. Hopefully, an update will eventually let players use the directional buttons to move instead of being confined to the analogue sticks. And players used to the infinite restarts of many modern platformers will have to come to terms with the fact there is no easy way to repeat a boss fight. Reaching a boss at the end of a world is one thing, but lose that battle, and the whole world must be repeated. It’s a gauntlet, and not always the most fun way to spend time.

For as annoying and heartbreaking as it is to lose a dozen lives in a single level, PUSS! has great pick-up-and-play potential. Few games have the player genuinely unsure what they’ll see next, and the level progression of each world is randomized. Levels certainly repeat themselves, but rarely in the same order, adding yet another dose of chaos to the already manic visuals onscreen. As devilishly difficult as PUSS! may be, it is still compelling. It feels like a fever dream, and even the soundtrack occasionally devolves into distorted muttering over synthesizers.

For fans of arcade-style games with unrelenting difficulty, PUSS! fits the bill. It’s frenetic and strange and for that, it’s a genuine standout. There is a bold, uncompromising vision at the heart of PUSS! and in a world full of remakes, remasters, and retreads of the same old thing, a little frustration is worth it to experience something this surreal.