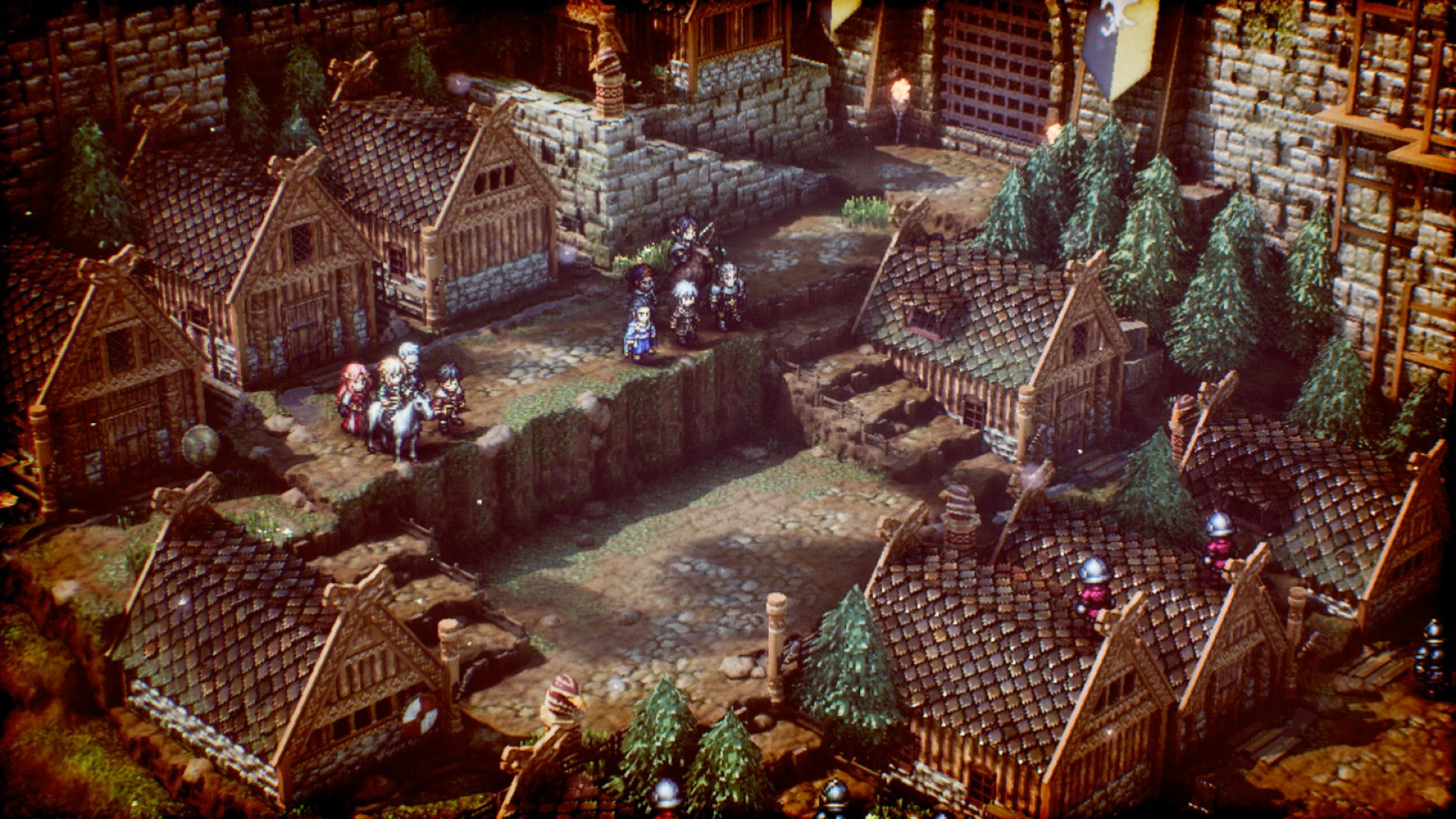 Wednesday’s Nintendo Direct presentation, the first in over a year, had a few great reveals. While there was no news of the eagerly-awaited Breath of the Wild sequel or long-delayed Metroid Prime 4, there is something new to look forward to in 2022. Seemingly out of nowhere, Square Enix announced the next in their HD-2D series: Project Triangle Strategy. The working title may be clunky, but if the demo is any indication, strategy fans are in for a sumptuous feast.

2018’s Octopath Traveler was an interesting divergence for Square Enix. Opting to tell individual stories instead of a grand, overarching narrative in the tradition of most turn-based JRPGs, there is little sense of the epic scale associated with the genre. Whether or not players agreed with how the story played out, there was unanimous praise of the art direction and musical scoring of the game. Project Triangle Strategy takes the aesthetic of Octopath and applies it to the tactical RPG. But Square Enix has also decided to tap into the storytelling conventions that defined genre classics like Final Fantasy Tactics. Though the demo is short, it paints a compelling picture of political intrigue that has been sorely lacking from the genre.

The demo picks up in the middle of the game, Chapter 6 out of an unknown total. The Kingdom of Glenbrook, the Grand Duchy of Aesfrost, and the Holy State of Hyzante have achieved a tentative peace after the fracas of the bloody Saltiron War. But an act of aggression from Aesfrost’s Archduke Gustadolph threatens that peace, and soon enough, the land is plunged into conflict. As a new war looms, alliances shift and characters wonder who to trust and who to betray. Though this demo offers only a taste of what’s to come, the characters and plot are instantly engaging. Anyone who enjoyed the machinations of Game of Thrones or the relationships of Fire Emblem: Three Houses will feel right at home.

Even though players come into the demo without any context, characters and relationship dynamics are instantly clear and compelling. Archduke Gustadolph and his sniveling siblings are instantly as hate-able as any Lannister. Roland, a son of King Regna, has a touching line of dialogue that conveys both information and emotion: “I was born the second prince. No one expected great things of me.” Avlora, Gustadolph’s imposing battlefield commander, is both intimidating in cutscenes and dazzling in combat. Every character has a memorable quirk or trait that also meshes well with their battlefield abilities, and there is plenty of strong voice acting showcased throughout this demo. This marriage of mechanics and character is exciting to see and hopefully continues in the full game.

And of course, Project Triangle Strategy is utterly gorgeous to look at. The signature “HD-2D” look that Square Enix recently patented is undeniably evocative, recalling the best of the SNES and PlayStation 1 era. This game looks like how RPGs look in the collective memory of gamers. Character portraits are vivid and even the UI is pleasurable to look at. Project Triangle Strategy aims to give players a grand sense of scale, and between battles, the player can scroll around a map to provide a little more context of where the action takes place. The demo doesn’t let players do much exploring beyond a handful of areas, but there are plenty of locations revealed during cutscenes, enough to provide a glimpse of the future. It’s a varied landscape: there are deserts and mountains, castles and small towns, decadent throne rooms and austere war tents. The presentation is beautiful all around, but it’s the tactics that carry the day.

For fans of tactics games, Project Triangle Strategy marks a return to form. Even before the demo’s first battle begins, it is abundantly clear that the developers of this game know what they’re doing. After a few cutscenes and just prior to the start of combat, players have an Exploration round where they can walk a character around the battlefield, scrounge for items, and get the lay of the land. It’s a smart feature that both enhances worldbuilding by letting players chat with members of their roster and provides a tactical advantage. This simple addition adds a lot to the genre, and helps players better visualize the world in which these battles take place.

Combat will feel instantly familiar to tactics fans. A timeline at the bottom of the screen determines the order of battle, and movement is tile-based. Players will have to consider terrain and positioning as often as they think about attack and defense. Maneuvering allies behind enemies to score critical hits is crucial, as is determining which characters can be on the front lines and who should stay back to store their TP. Rather than a simple HP/ MP split, characters in Project Triangle Strategy unleash skills by building up TP, a limited resource. Most characters gain one TP per turn, enough to use a simple spell like Cure Wounds or a basic attack like Double Thrust. But more powerful skills, like RPG staple Haste or the damaging Scorch spell, take two or more TP to activate. Finding the balance of when to attack with weapons, when to hang back and store up TP, and when to unload on the enemy is incredibly satisfying.

The demo lets players use nine characters on the battlefield, leading to some protracted fights. They may be long, but they’re constantly engaging. Reinforcements may arrive and swing the balance in the enemy’s favor, or the player might use a secret trap to devastate a half-dozen enemies in one fell swoop. Players have great freedom to think about their next action before locking down what their units do next, and there’s no time limit on decision-making. Tactics are at the forefront, and players are rewarded for thinking critically about their actions.

During battle, players are awarded Kudos for performing specific moves, like exploiting an enemy’s weakness or successfully executing a backstab. After battle, players can trade these Kudos in for powerful abilities to use in future fights. It’s a wonderful incentive to keep experimenting. While the demo only lets players experience a few battles, it’s easy to see the potential of this system on a larger scale.

Outside of battle, Project Triangle Strategy aims to keep players fully engaged by presenting them with meaningful choices. How meaningful these choices will be in the full game remains to be seen, but in the context of this debut demo, it is evident that Square Enix aims to bring consequences to the forefront. Players will not only act as masterful battlefield commanders, but as savvy negotiators.

After the first battle, Prince Roland absconds to a neighboring town’s castle to lay low. When the Archduke’s forces converge on his location, Roland and his allies meet to determine what they should do next. The Archduke claims that he’ll call off his attack if the group surrenders the crown prince, and it seems like most of the allies are leaning in that direction. But the game lets the player decide how to proceed. They’re given the chance to explore the surrounding village and talk to party members and townspeople. In doing so, they just may gather enough compelling information to tip the scales in favor of hunkering down and weathering the Archduke’s assault. These Scales of Conviction are a dramatic device but they serve a purpose, giving the player more authorship over the story. In a demo bursting with good ideas, this might be the most interesting.

The game doesn’t tell you when you’ve changed an ally’s mind or offended someone else. Sometimes, conversations feel like those in a Telltale game, where the player is aware they’ve had an effect on a character but they are unsure what that effect will be. Multiple playthroughs will undoubtedly be required to see everything this game has to offer; hopefully, choices will emerge as meaningful as they are implied to be. The Scales of Conviction seem like a more dramatic and visible version of systems present in The Banner Saga, where party members would leave or remain based on choices the player made. Hopefully, these systems will result in players having unique experiences and varied character interactions. The premise is sound, but how everything is executed remains to be seen.

Ultimately, the Project Triangle Demo makes a strong case for itself. Whether the title stays the same or changes, this is a must-watch game. This debut demo is available now on the Nintendo Switch, and the full game is slated to be released in 2022.