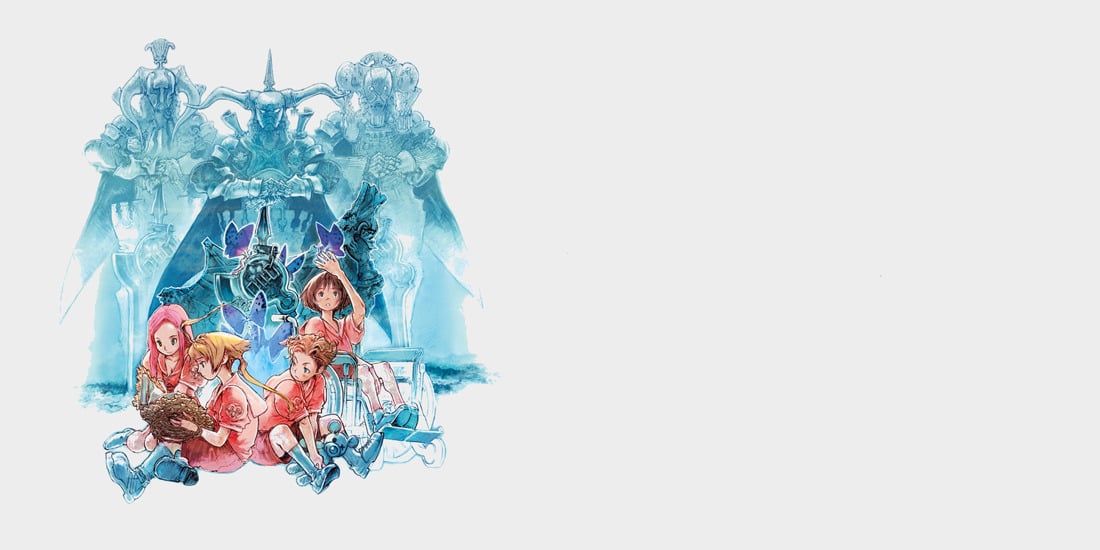 The cover of Nintendo Power volume 171 features a quartet of children. Two of them are entranced by a massive book, while a third looks sulkily on. The fourth, in a wheelchair, has a look of wonder on her face as a brilliant blue butterfly flits by. They look watercolor-painted, and their body language alone tells a story. But the cover also features something more imposing: three terrifying, armor-clad figures, carrying massive swords. Even though the rest of the cover is pretty busy, packed as it is with advertisements for the Game Boy Advance SP and tantalizing screenshots previewing the contents of that particular issue, I couldn’t help but be transfixed by those kids, and the adults behind them. The game was Final Fantasy Tactics Advance, and from the moment I traced my fingers over those images, I knew this game would change my life.

My experience with Final Fantasy as a series had been sporadic up until 2003. I was aware of the major games in the franchise; not because I had played them myself, but because I so badly wanted to. Final Fantasy VII was on my radar but it would be another decade before I would have a PlayStation console of my own, and my efforts to play through the game on a PC were disastrous. Dawn of Souls, the GBA remake of the first two games in the series, was still another year away. I had played dipped my toes into RPG waters, devoting dozens- if not hundreds- of hours to Pokémon Blue and Pokémon Silver. I had played Dragon Warrior I & II and even III on the Game Boy Color. But the Final Fantasy series always felt just out of reach for me. Fortunately, Nintendo was eager to bring newbies along to the grand tradition of strategy RPGs.

Final Fantasy Tactics Advance ended up being not only my introduction to the series as a whole, but the entire genre of the tactical RPG. Something about the art style and the promise of fantasy-themed tactical gameplay demanded that I give this game my full attention. I even went the unprecedented step of picking up the official player’s guide because I wanted to see every inch of this game. I’m glad I did.

Final Fantasy Tactics Advance starts with a snowball fight. Main characters Marche, Ritz, and Mewt learn almost all the fundamentals of combat in a short introductory sequence that still holds a place in my memory. It’s slow-paced, a far cry from the epic swords-and-sorcery clash I was expecting. The fight is basically a prolonged cutscene as we get to know these characters, seeing how they communicate, their personalities and fears. It’s a battle sandwiched between a ton of exposition, introducing players to the world of these characters and eventually to the world of Ivalice. I had no idea that Ivalice already existed, in the original Final Fantasy Tactics. As far as I was concerned, this was it, and I was instantly drawn in hook, line, and sinker.

The original Final Fantasy Tactics, released on the PlayStation in 1997, is revered for its political intrigue and complex gameplay. Featuring a dense story and steep difficulty, I’ve never been able to finish it, even though I have a digital copy of War of the Lions taking up space on my PS Vita. Tactics Advance aimed to create a kinder, gentler tactics game. For me, it was the perfect onboarding experience. Having played a lot of checkers, chess, and Stratego as a kid, I’d like to say the tile-based battlefield made a certain amount of sense to me.

Rather than the traditional turn-based battles of other JRPGs, Tactics Advance‘s fights take place on large (and occasionally small) battlefields. Instead of random battles where enemies have only a few different moves (attacking, defending, the occasional defensive buff or other magical spell), each battle asks the player to form a small party to take down another one. Save for most story missions that require players to use certain characters in battle, how each encounter played out was largely in my hands. I loved being able to deploy the units I wanted to in any given situation. It was an endless joy to wander around the map, picking fights where I could and chasing down every sidequest that popped up.

I was entranced by the idea of a team that could handle anything that came up. Instead of just a pool of big, beefy warriors, I wanted to diversify. Even though the game’s art design is pretty cartoony, I found the different races incredibly intriguing. Beefy lizard-men called Bangaa were my particular favorites, though the mischievous Moogles will always hold a special place in my heart.

Part of the difficult-but-not-too-difficult aspect of Tactics Advance was that nearly every battle had restrictions of some kind. In the world of Ivalice, intimidating judges will haul your ass off the battlefield and throw you in the penalty box if they catch you breaking the rules. Characters can earn yellow and red penalty cards, almost like they’re at the world’s most magical soccer match. Some of these laws are easy to follow: things like “no fire magic allowed” or “no item usage”. Other laws limit the effectiveness of certain classes; try attacking with a Thief character when knives are banned. In the early game, these laws can feel like the height of disempowerment. But by the end of the game, I had enough creative solutions and overpowered characters to circumvent any laws laid out in front of me. The more I played, the more I felt like my mind was expanding to course-correct for any unexpected situation.

I play video games differently now than I did seventeen years ago. Now, it’s a rarity for me to replay almost anything, but back then, I wanted to wring the most out of every game I had. Final Fantasy Tactics Advance was probably the first game I ever owned where I went out of my way to see it all. I wanted my characters to have mastered every job they could. I wanted to find every rare sword and piece of armor, every magical accessory and secret character. When I found out there were secret party members that could be recruited, I started another playthrough because I didn’t want to lock myself out of any sidequests that I might have in my original, 299-hour file.

I even managed to develop a Blue Mage with every learnable skill. The Blue Mage is an outlier, but a delight to develop. Rather than deal straightforward magic damage like the iconic Black Mage or learn healing spells like the White Mage, the Blue Mage can learn monster abilities by absorbing their attacks. By using my Nu Mou Beastmaster, I could command monsters to use their specific techniques on my Blue Mage. This class isn’t particularly powerful, but for the sake of completion, I went all-out to maximize their effectiveness.

Looking back, it’s easy to see why Final Fantasy Tactics Advance struck a chord with me. The game is beautiful, with lush character portraits punctuating every cutscene. Storywise, it’s a far cry from the Game of Thrones-esque twists and turns of the first Final Fantasy Tactics or Final Fantasy XII, the other games that take place in Ivalice. But I was still intrigued enough to battle my way to the very end and I found deep satisfaction in doing so. For myself and many others, this was the game that sent me down a rabbit hole of new levels of satisfactions in video games. The cartridge was never out of my Game Boy Advance for long.

In the years since, I’ve played Xcom: Enemy Unknown and Enemy Within. I played various titles in the Advance Wars series, and have had Tiny Metal and Wargroove on wish lists for years. But Final Fantasy Tactics Advance will always be the strategy title that I loved the most. It’s a game that changed my life, for the better.