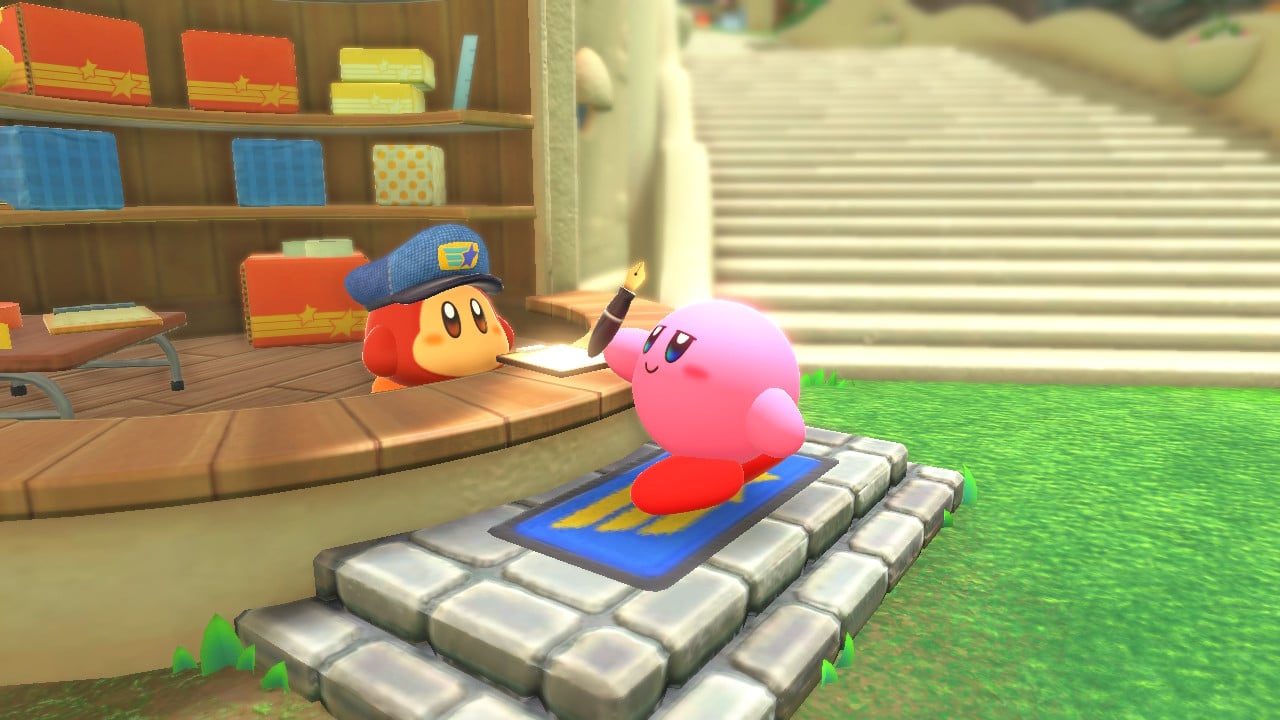 Editor’s Note: In the previous Kirby games featuring present codes, HAL Laboratory had a tendency to release special celebration keys when the respective title would reach various sales and anniversary milestones. To keep up to date on whether more present codes arrive after the release of Kirby and the Forgotten Land (and we’re sure there will be), follow the official Japanese Kirby Twitter account or sites like Kirby Informer for the latest information! Without further ado, these are all 16 Present Codes you can use at the Waddle Dee-liveries counter…

If you played through Kirby and the Forgotten Land’s demo last month, chances are you probably passed over a special message screen that displayed after completing the teaser’s select three Natural Plains levels. This message contained two Present Codes usable in the full game. For these two codes, players do not need to have any form of demo save data on their Nintendo Switch to obtain them–they are completely free for all players to use as long as they can type them in properly and know what they are!

For players who did not pick up Kirby and the Forgotten Land on the Nintendo eShop, there is a chance that you may have gotten the game from a store that was offering a Present Code–well, probably not, but there is still a chance! There are two secret pre-order bonus codes that are not region-specific or locked to actual purchases of the game.

To promote the release of Kirby and the Forgotten Land, American My Nintendo users can hop on the game’s official North American website to play another one of the company’s webpage easter egg hunting games. By finding five hidden in-game items across the website, players will not only receive 100 Platinum Points on My Nintendo but they will also discover the following Kirby and the Forgotten Land Present Code that can be used until June 10th!

While on the topic of My Nintendo, you may want to find the five items on the website and grab those Platinum Points even if you are a viewer who is just getting the code from this list. There could potentially be some physical Kirby rewards coming to the My Nintendo store page soon! A Mouthful Mode grocery bag has already been announced as an upcoming product users can purchase with Platinum Points and a Spring Sweepstakes is currently going on until the first week of April.

Additionally, the following three codes were made available across Nintendo, HAL Laboratory, and Kirby’s official social media pages and dedicated websites before the game was released. Like the My Nintendo website Present Code, these keys are set to expire sometime after April.

In-game present codes can be found scattered across the hub world of Kirby and the Forgotten Land as the player slowly rebuilds Waddle Dee Town to its former glory. While the codes are not in plain sight, they can always be discovered when the “search” icon appears in a discrete location. From above the Waddle Dee Café to inside the small town’s big cinema, these are all six of the in-game Present Codes that players can discover throughout the home of the Waddle Dees.

On a side note, it is important to recognize that players can input all these codes as soon as the Waddle Dee-liveries service is made available–and the same goes for every other Present Code in the game. Players do not have to wait to open locations to input Present Codes.

The “Thank You” Post-Game Present Codes

Without showing any visual spoilers, there are two Present Codes that can be discovered in the post-game of Kirby and the Forgotten Land. While these are normally found on the completion statues players can obtain in Waddle Dee Town after meeting select requirements, the following two codes both worth a hefty reward can be inputted at the Waddle Dee-liveries service at any time.