The rumor mill has been churning this week in regards to a new Pokémon game for the Nintendo Switch. The apparent leak of the speculative Pokémon Stars has been grabbing a few headlines across many media platforms, but the underlying concept of the game is perhaps the bigger concern.

Whilst Game Freak has said it would be working on some new Pokémon games for the Nintendo Switch, the assumption of a new Pokémon Stadium, or possibly Pokémon Snap seemed much more realistic back then. However, if rumors are to be true, and let’s be honest they rarely are, then it is the third addition to the generation seven games that are in production.

It would be wise for Nintendo to wait until three or four years down the road, and create the generation eight set of games, before switching the main series to the Nintendo Switch. Generation seven has only just begun, and it’s way too soon to even be thinking about the possibility of a Pokémon Stars. In the eventuality that it is materialized, which isn’t a given considering Pokémon Z never happened, then it should remain a Nintendo 3DS exclusive.

In regards to the prospect of a Pokémon Stars, it remains unlikely. During much of the storyline of Pokémon Sun and Moon, all hints point towards a Kanto remake. This is further enforced by a protagonist of the series, Lillie, taking her journey to the region. Whilst there has already been a Pokémon Red and Blue remake in generation three, Pokémon FireRed and LeafGreen, the emphasis on generation one pokémon has been so high that it is likely a return to Kanto will happen. 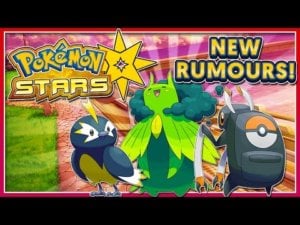 Apparent new pokémon are being shown.

Furthermore, rumors suggest Pokémon Stars will introduce twenty new pokémon, but this is highly speculative, and the storyline would have to adapt to the sudden appearance of the new additions (that Ultra Beast Wormhole again).  But everything we’ve heard has been geared towards only a higher resolution version of what we already bought in November, a cynism-inducing tactic to sell the Nintendo Switch.

However, the leak was always ambiguous. A mere mention of the word ‘Pokémon’ in a single sentence does not assume the development of Pokémon Stars. This could allude to any of the other possible titles mentioned or could be something wildly beyond our imagination. We already knew Pokémon was coming to the Nintendo Switch, so it’s weak news and a harmful rumor that will only create disappointment.