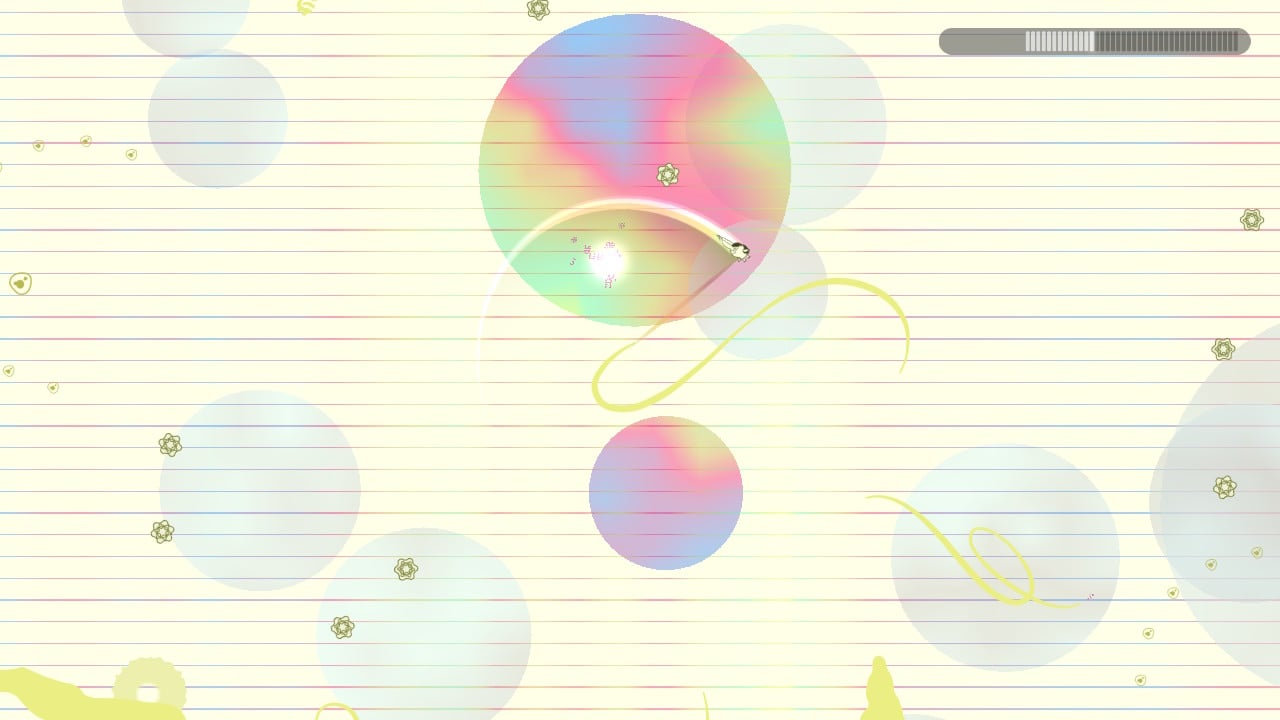 PixelJunk Eden 2 is a refreshing reminder that there’s beauty in simplicity. There’s room for more meditative experiences in gaming away from the constant quest- and action-based loops so common nowadays. Though its visual identity can be hit-or-miss, there’s a simple kinetic magic that it manages to tap into with every play.

PixelJunk Eden 2 is an abstract gardening platformer. You’ll play as little creatures called Grimps and swing around gardens collecting pollen to help seeds bloom. The mechanics are simple: automatically cling to a plant, push the left stick out to use your silk thread to start swinging in a circle, and then touch spores to create pollen. Once the pollen is in the air, swinging or jumping through it pushes the pollen towards nearby seeds. Pollinate a seed enough and it’ll blossom into another plant that can be used for traversal/pollen collection, and the cycle continues. All of this is done towards the goal of finding the Spectra (the source of all life in the world) and clearing the stage within the time limit.

The main campaign is broken up into small batches of levels that gradually increase in difficulty and complexity as you progress. Whereas the first dozen or so levels stick to the core swinging and pollinating mechanics, later levels introduce flowers that’ll shoot you across the screen, warp points, and even hidden Spectra that require a bit more cunning to discover. Everything ramps up steadily enough that you never feel uneqipped to handle new elements; if anything, it makes completing later levels all the more satisfying.

That said, Q-Games has supplied players with a plethora of ways to customize the difficulty. This is all done via “spices,” power-ups that’re unlocked based on how much pollen you collect per run. The effects of these run the gamut from putting an extra 33 seconds on the clock to increasing the length of your silk for wider swings. Three spices can be equipped per run, and since more are always coming in, there’s little reason not to use one if you’re struggling with a particular level. They’re a great way of giving players optional assists without having to re-design entire levels for a separate easy mode.

While the campaign is the clear star of PixelJunk Eden 2, I actually had more fun in Garden Collection. It’s essentially a free-play mode that lets players choose their preferred stage and Grimp, gets rid of the clock, and adds in four additional Spectra to find and collect at your leisure.

As someone who typically avoids games with harsh timers due to anxiety, this mode is a godsend. It retains the simple enjoyment of collecting pollen and filling in seeds without the urgency of the main campaign. Even better, Garden Collection tracks optional objectives (e.g. 0/65 seeds grown) so players can still work towards something while enjoying it at their own pace. This is assuredly the mode I’ll return to the most over the coming months.

PixelJunk Eden 2 gets a lot right from a design standpoint. Its core mechanics are accessible, and there’s an inherent feeling of fulfillment that comes with filling in seeds and seeing plants blossom before your eyes. The campaign provides a meaningful sense of progression and gradual difficulty curve for those who want it, and the optional spices and Garden Collection mode allow anyone to enjoy the unique sensory experience Pixeljunk Eden 2 brings to the table. Although not every stage is a winner visually (a couple are so off-putting that I actively avoid them altogether), the synergetic rhythms and vast majority of stages blended together into an entrancing experience. If you’re looking for a cozy, organic, and downright psychedelic time, this is a must-play.