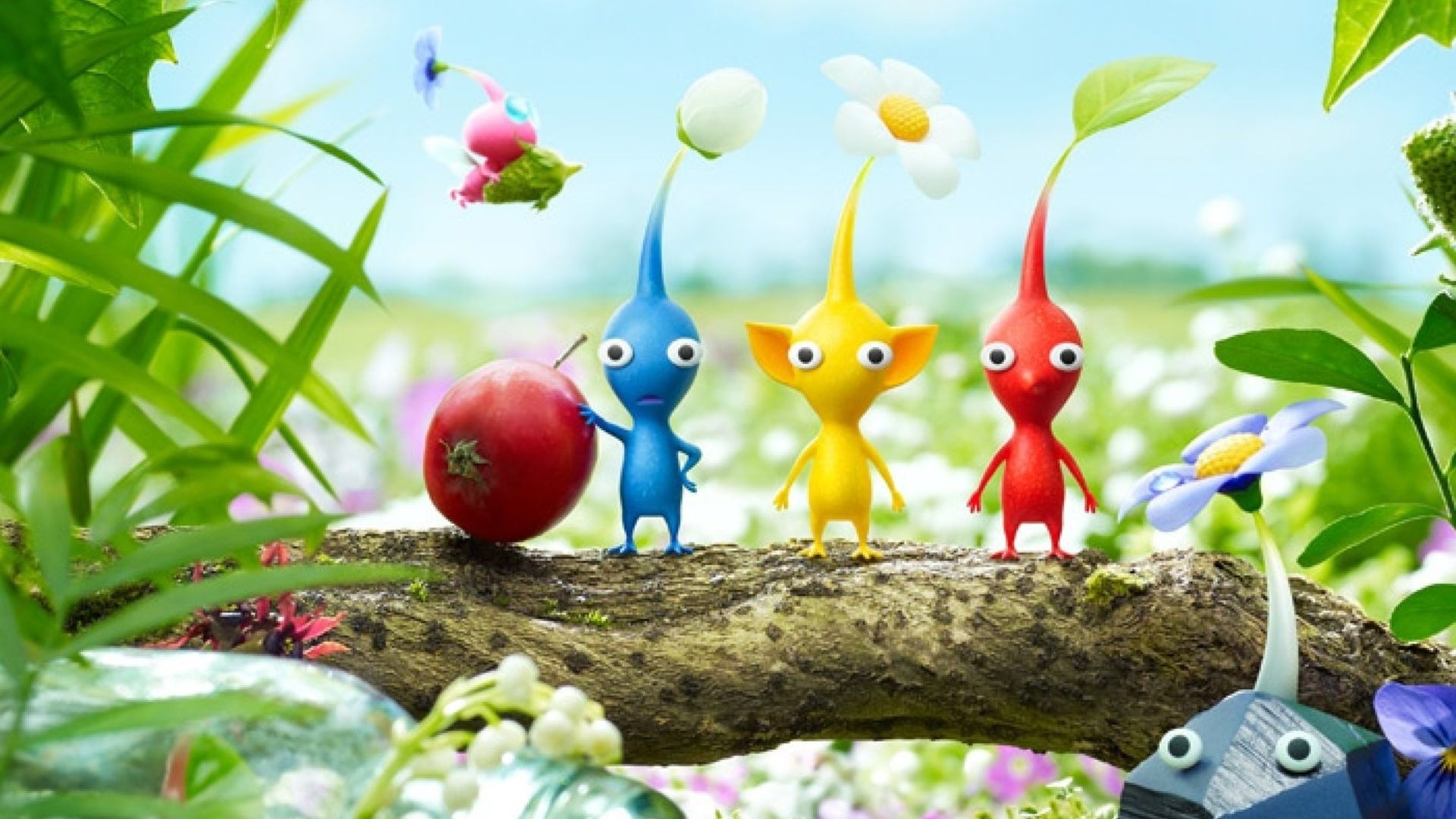 How could we ever say goodbye to the hardest working cooperative species mankind has witnessed? Miyamoto may have promised Nintendo fans Pikmin 4 seemingly ages ago, but before the home of the red plumber can reach their next uncharted planet, they have taken it upon themselves to make a couple of pitstops- one being to redeem a modern classic stranded on a disappointingly unpopular console. Despite lacking any massive upgrades, Pikmin 3 Deluxe is still a fruitful return to the planet PNF-404 and a phenomenal addition to the Switch’s growing first-party lineup. If you have not played Pikmin 3 due to its previous exclusivity on the Wii U or are interested in crash landing into the series for the first time, you will not want to miss this critically acclaimed extraterrestrial adventure in its latest juiced up form. However, Deluxe might be a slightly harder purchase for veterans to justify.

A successful landing with some unnoticeable damage.

Pikmin 3 focuses on the urgent adventures of three intrepid explorers from the not-so-booming planet Koppai. Due to exponential growth in population and resource usage, Koppai begins to see a downturn in available edible matter for its inhabitants. In a last-ditch effort to save the population, the planet sends explorers across the galaxy in hopes of finding any form of sustenance that can be mass-produced on a global scale. After Alph, Brittany, and Charlie mysteriously crash land on the appropriately dubbed PNF-404, they discover a possible key to Koppai’s future. It is up to the player to reunite the team, find as many available fruit samples as possible, and uncover the mystery of the uncharted planet – all while relying on the help of small lifeforms with unique attributes based on color who operate in herds known as Pikmin.

Pikmin 3 may follow a rather basic, albeit well thought out narrative, but the game truly shines in its characters and real-time strategy gameplay, as expected with most Nintendo releases. Many titles have attempted to capture the feeling of controlling over one hundred entities at once, but the Pikmin series truly thrives in this field as it relies on having one- or in this case three characters controlling the rest of the masses. Outside of puzzle-solving and multi-tasking three captains during the adventure, the methodical gameplay of the first two entries has remained entirely intact and has only needed adjustments since its debut. Best of all, its latest release has been properly adapted onto the Nintendo Switch almost seamlessly. What Deluxe does best is refine and fix the original title to accommodate for the Switch’s quirks. Due to a lack of a second screen like on the Wii U, the developers behind Deluxe have had to figure out how to allow the game’s natural duel screen structure to constitute with that of only one.

The result is nothing short of exceptional when considering the difference in play formats, although there are some undeniable downsides to the new changes. The overall control scheme loses some of that special functionality only the Wii U gamepad could provide, like being able to constantly monitor maps while playing, viewing different character positions at once, or seeing if your Pikmin ran into trouble on their way to the S.S. Drake. In turn, what we receive here is something more akin to the streamlined and straightforward feeling that the original Pikmin and Pikmin 2 had. However, that is not to say Nintendo has not provided a substantial amount of upgrades too. A lot of those annoying little nuances from the original have perished here as the developers have fixed the game’s lock-on system and some of the annoying free-flowing group movement that could have lead to accidental team massacres. Nintendo has made their latest Deluxe package more accessible than before. Despite having a more traditional control scheme that will certainly appeal to longtime series fans and even newcomers, Pikmin 3 Deluxe will be a hard sell for those who are on the fence about making a second flight rather than their first.

It may not be enough to warrant the purchase of a second copy, but the developers have clearly kept their loyalist explorers close to their hearts as they have added new, old, and refined popular features. Pikmin 3 Deluxe notably makes multiple appreciative steps to please its dedicated audience by digging into specific areas the fanbase adores. One of these additions is that of the Piklopedia from Pikmin 2, a well-documented encyclopedia of enemies and items filled with attack tips and personal opinions written from the perspectives of the cast. It is such a simple feature that is well utilized to both provide players who may not complete the game in a short amount of time with useful information while giving die-hard fans more character interactions to gloss over. On top of returning controller options, interchangeable gameplay features, and even a cooperative mode for the single-player campaign, there is a new difficulty dubbed “Spicy Mode,” which will cap your Pikmin party maximum to 60 while increasing each opponent’s strength and in-game clock speeds- although this feature is oddly locked behind beating the campaign or completing the demo.

Content-wise, Deluxe’s biggest selling point for returning fans is going to be the new prologue and epilogue missions focusing on Captain Olimar and Louie’s adventures to help pay off Hocotate’s inconceivable debt. In the same vein as Xenoblade Chronicle’s Definitive Edition’s bonus epilogue, the latest side content in this package is nothing but extra fluff to sweeten the purchase for returning veterans and newcomers. While it is continually impressive how Nintendo has managed to seamlessly add new content to older games, the characters’ return to the planet is nothing worth writing home for. It is certainly better than Xenoblade’s Future Connected, but once again it does not add anything primarily substantial. Olimar and Louie’s latest misadventures on PNF-404 does give some of Pikmin 3’s ending questions closure. However, calling these extra hours a selling point would be an overstatement of their true value. If you want more challenging and lighthearted Pikmin challenges that is exactly what you will get- something many players will be fine with. If you are looking for hours of new content and incredible areas to explore, you will certainly not find that here in these short missions.

There is only one real missed opportunity in this port. Unlike every other Wii U title jumping over to Switch, Pikmin 3 Deluxe oddly lacks a visual upgrade with it comes to both resolution and framerate. While the framerate is not a huge issue due to the Pikmin series relying on a slower and planned pace, the missing resolution jump is quite bewildering. After Mario Kart 8 Deluxe, Tokyo Mirage Sessions #FE, and Captain Toad: Treasure Tracker, I expected Pikmin 3 Deluxe to receive the same slight enhancements those titles had gotten, but outside of a few lighting changes during specific areas, nothing else has been altered to accommodate for the Switch’s higher processing power. Perhaps Nintendo’s internal struggle with the pandemic tampered with their initial plans for Deluxe, but anyone who has played the original release will nonetheless surely be disappointed over the lack of a full high resolution upscale for both docked and handheld mode, which would have made this gorgeous game look even lovelier.

It is the best time to set your destination for the Pikmin planet if you never have before.

Pikmin 3 has always been one of Nintendo’s most remarkable modern adventures and now with its latest Deluxe version, it’s been given a second chance to broaden its audience as it breathes new life on a platform highly reflective of its core ideas of companionship. Although its improvements and additions may seem minor compared to its Wii U counterpart, its new control scheme and refined multiplayer content on Switch is going to inevitably make it worth traveling back to for many die-hard fans- although perhaps not at its full retail price. Pikmin 3 Deluxe’s new cooperative features and bonus content adds more to an already welcoming access point for series newcomers. While it may play out as fruitfully satisfying, it is certainly a completely skippable distraction for the Pikmin players unsure about double-dipping. If you previously missed out on exploring the inner depths of PNF-404, do yourself a favor: grab your best comrade, and check out the adorably dangerous planet you should have never altered course from seven years ago. For those looking to charter an expedition back to their home, go in with caution that this is not a major upgrade of any sort, but a delectable cherry on top of what you already experienced.