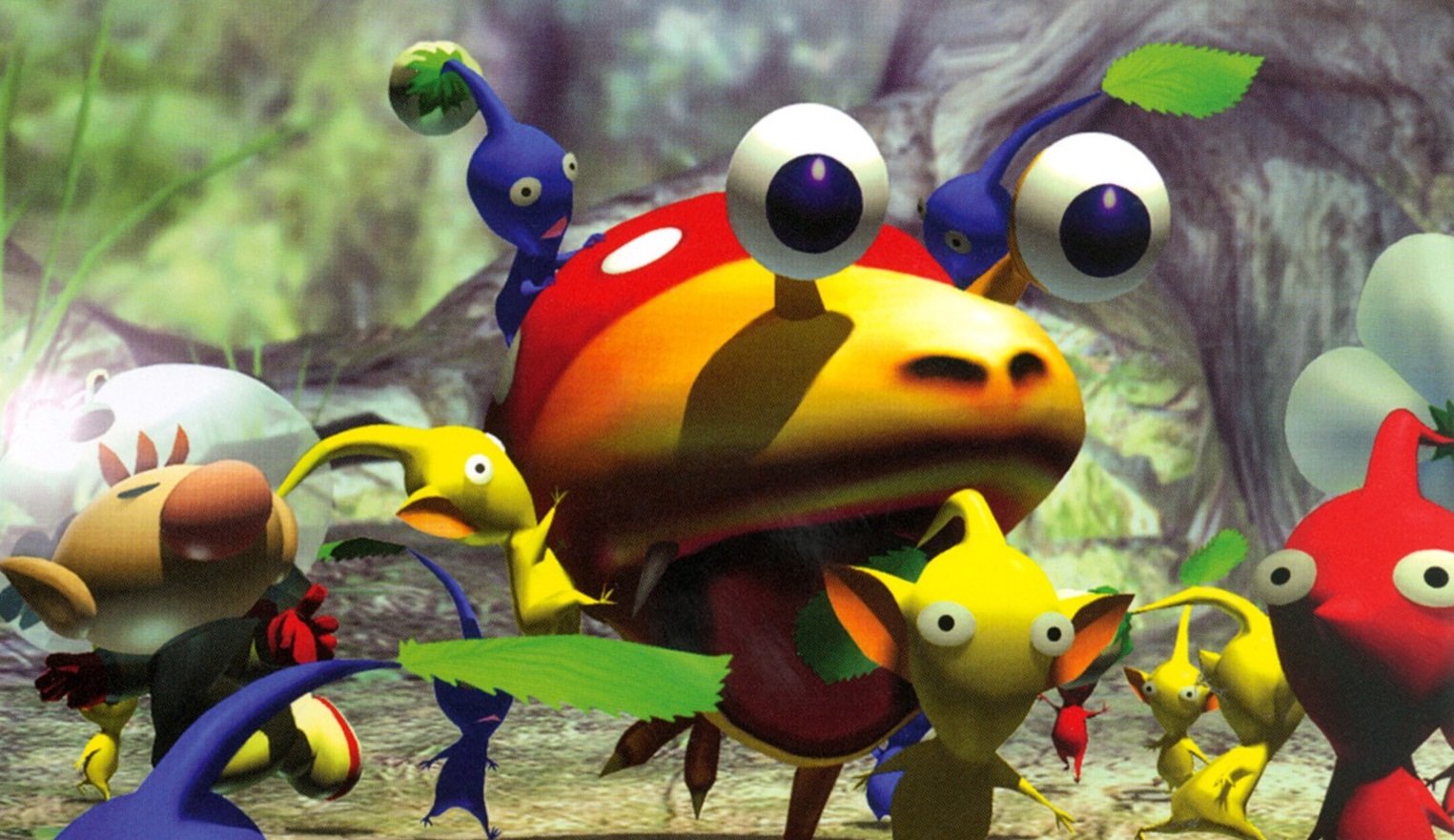 Real Time Strategy and video game consoles have never really mixed. RTS games tend to demand a lot of little tasks to be completed across a large map in very little time. This isn’t impossible to do on console, but it’s much harder. There’s also the fact that a lot of the fun in RTS games comes from their competitive aspects. Broadband and LAN were only possible on PCs for the majority of the mid to late 90s, when RTS was on a popularity rise. Console ports of games like Warcraft, Command & Conquer, and StarCraft were often afterthoughts and dismissed a lot of the elements that made their PC counterparts fun. Pikmin took a different angle with RTS when it launched in 2001, and it set a standard for future console RTS projects.

RTS games require a lot of micro and macro. Micro is all the smaller objectives in a game. Things like moving and managing units effectively is all micro. Macro is the opposite, it’s the bigger picture. Things like being aware of what’s happening on the map as well as multi-tasking and unit building are all macro operations. What Pikmin does is simplify micro and mix macro with other elements to achieve something similar to other real-time strategy games.  Simplification sounds a bad idea when designing a strategy game, but Nintendo’s approach works better than sounds. 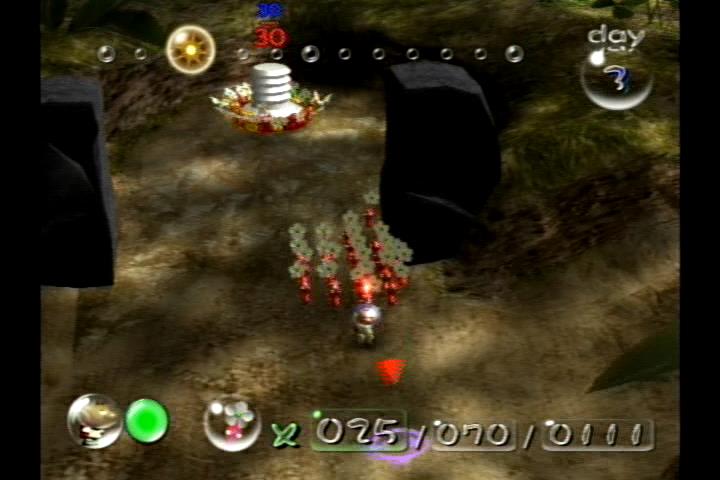 Pikmin is PvE rather than PvP. Your obstacles are walls and roadblocks in the game rather than an opposing player or force.

One of the first rules of micro is unit management, and knowing what types of units to focus on out of the myriad you can create. Pikmin comes in three different types, a relatively small number. Red Pikmin are immune to fire hazards, yellow can carry explosives and be launched farther, and blue Pikmin are immune to water hazards. Combat, another micro related function, is also simplistic. It’s rare to fight more than 1 or 2 enemies at a time in Pikmin, even the final boss operates alone with no other enemies around him. This is partly because expecting the same amount of management from a GameCube controller as that of a mouse and keyboard is ridiculous. It’s not easy to cycle through Pikmin-based on their color while moving, and fighting multiple enemies while doing that would become a nightmare. Instead of commanding multiple groups, the player pitches Pikmin one at a time or can tell their whole controlled mass to swarm one target. The only way to really divide Pikmin up is to dismiss them into groups and control each group one at a time. It can feel clunky at times; this is because combat isn’t the focus of Pikmin, puzzle solving is. 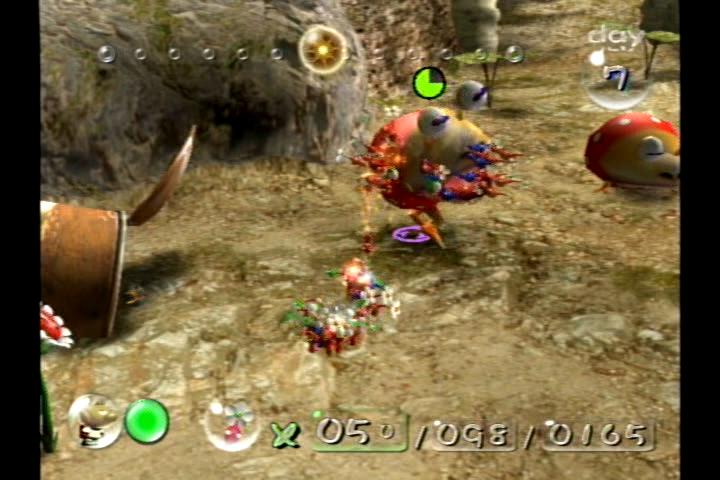 The biggest gimmick to combat is swarming Pikmin around Olimar so he throws them faster.

Puzzle solving falls under macro. Things like resource management, knowing which Pikmin types to get past certain areas, and efficiently collecting animal carcasses and ship parts that build the bulk of the game. This doesn’t really sound difficult to do, but that’s where Pikmin’s time limit comes in. You have 30 days to recover 30 ship pieces, and each day lasts around 13 minutes. It still doesn’t sound too difficult. Thirteen minutes dedicated to each part seems like plenty of time, but it’s not if you’ve never played the game before. Not knowing the layout of maps, enemy locations, and even factoring in when to resupply your Pikmin with more units all cuts into the precious 13-minute limit. It gives the game the edge it would be lacking thanks to its simplified combat. If you come across a part that requires 20 Pikmin to move and you only have 25 total yellow Pikmin on you do you send them to take the part or do you scavenge with them to make more units, and backtrack to get a different color to take the piece? Do you take somewhat equal numbers of all 3 colors with you at all times, even if this means sacrificing optimization and growth rates for your units? Or do you explore and map out what you specifically need for each area? You can’t grow new Pikmin if you have 100 on the field already, meaning any new ones sprouted are automatically stuck at the lowest rank inside their little barracks, but at the same time not being prepared for anything will cut into your time limit and force you to backtrack. It’s all these elements combined that make Pikmin an effective strategy game, even if it’s not done in a traditional multiplayer sense. 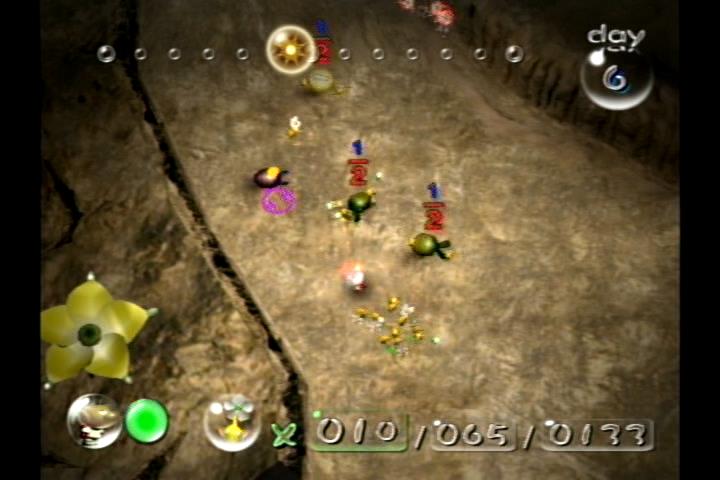 Pikmin set the groundwork for what would become a popular hook for multiple console RTS game. Titles like Overlord, Little King’s Story, and The Wonderful 101 all pull some of their basic concepts from Pikmin. It’s not a perfect game by any means, but the contributions it has made to both RTS games and Nintendo make it worth talking about.