A break up is a devastating shake-up to your life, whether it comes after a short-term experience or years of commitment. It can rock you to your core. It can leave you feeling isolated and unlovable. It can even lead you to question who you are. Well, I recently went through a breakup. And amongst many things, video games, my oldest passion, helped me get through this rough period. And I, in fact, owe a lot to one game in particular: Persona 5.

It didn’t hit me straight away. Of course, there were some initial tears. But shortly after, there was a sense of freedom. I can do whatever I want now. If I feel like doing something, I’m just going to do it. But then I realized the problem. I didn’t really want to do anything. I felt lost. This other person made up a big portion of who I was and how I spent my time. And everything I’d done before for fun, reminded me of her. And being reminded of your ex, straight after a breakup, isn’t fun.

So how does this relate to Persona 5? Well, I may have played Persona 5 far sooner, if I hadn’t gone through this experience. Because video games for years had been my release. My way of unwinding. When I play a game, I invest myself into new worlds and stories. But my ex and I had played games together. She was my go-to person to discuss the latest gaming news with. I had, in fact, met her for the first time while working part-time at an EB Games. And so like many things in my life, I suddenly couldn’t play games. There were too many painful memories associated with them.

It was a few weeks before I turned on a console. Battleborn was my first foray into my old passion. Now Battleborn certainly isn’t a great game by any means but by playing co-op with a friend, I was able to at least pass some time. Honestly, I was in a rut for about a month but one night, when my friends were busy, and I was wallowing in a swamp of self-pity and loneliness, I returned. I needed something to get lost in. A world different from my own to escape to. I’d heard game journalism veterans like Andrew Goldfarb and Greg Miller champion the Persona series for years, and the latest entry into the series seemed to carry on that level of quality. So I decided to give it a go.

Sure the game is brimming with style and its turn-based RPG battles were well designed. But I didn’t care about any of that. At least not at that point in my life. If you’re interested in the more technical side of Persona 5, I highly recommend you check out our review. But that isn’t what this article is about. This article is about how this game’s characters got me through the next few weeks.

There is the greater story of Persona 5. Where you gain the ability to influence malicious, greedy and perverted people. By ‘changing their heart,’ they retire their wicked ways and confess their sins. However, when you’re not trying to save Japan from demented adults, you’re a normal high school student. You do everything a normal high school student would be expected to do. Get a part-time job, study for exams, hang out with friends and go on dates. You also do more peculiar stuff like hire escorts and hang out with drunken journalists, but let’s not go down that road. Let’s instead focus on how the more mundane aspects of this game actually helped me. 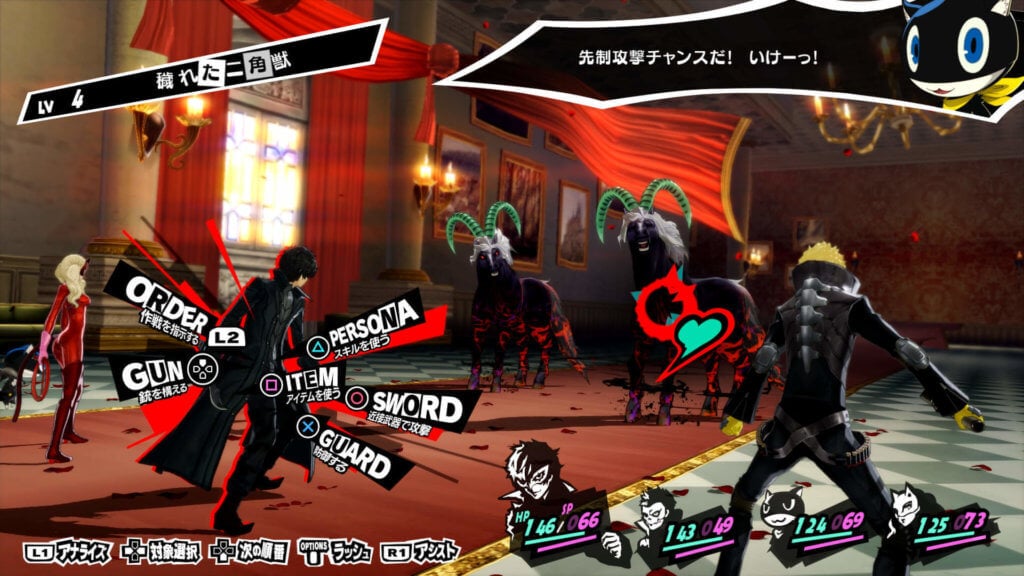 First off, I had an initial connection to the game’s protagonist. This might sound odd. He’s between 14 and 15, whereas I’m 21. He is Japanese and I’m from New Zealand. I talk a lot and he didn’t even have a voice (your character in Persona 5 is the only character that isn’t voice-acted). However, age and ethnicity aside, I felt like we were the same. We both had gone through a traumatic experience. He being found guilty of a crime that he didn’t commit, and me obviously having gone through a breakup. We both did what we thought was right in those situations, yet were judged by those around us for what had happened.

My character, who I had named James, began his journey by settling into Shujin Academy. As the new kid in a big city, James had to learn the ropes. Make friends, answer questions in class, and get home before his curfew. Playing a high school simulator may sound dull. But it took me back to a simpler time. It took me back to my own memories of high school. When I didn’t have to worry about my career. When I used to come home after school and watch Naruto with my brother. When relationships weren’t so complicated.

Over the course of the year (in the game…it didn’t take me that long to get over my break up… give me some credit), I made countless friends. Not by being cool or actively seeking out companionship. I made friends the natural way. Over the course of the story, James’ path crossed with those of others. Each one of them a fully fleshed-out individual. They weren’t the one dimensional NPCs found throughout so many RPGs. These were people I ended up spending 120 hours with. And the more time I devoted to each them, the more I learned about them. About their goals, their life experiences, how they dealt with adversity. Just like in real life. I gravitated towards some and lost interest in others. Ryuji was my best mate, Morgana my trusty sidekick, and Ann, my girlfriend. I did try and obtain multiple girlfriends but just like in real life, I didn’t have enough charm. I mean hey, I’d been in a committed relationship for nearly four years. You can’t blame me for getting James to play the field.

What this gave me was structure and stability. In my life, my friends and family couldn’t always be there. They had work, they had to study and they had their own hobbies. I did everything with my ex. And now that she was gone I couldn’t expect everyone else to drop what they were doing and take her place. That’s where Ryuji, Ann, Morgana and so many others filled in the gaps. Sure, real-life relationships are important. But people can’t always be there when you need them to be. And when my friends and family were busy, I knew I had a whole bunch of friends ready to hang out with in Tokyo. The emptiness inside me, that missing piece, it started to go away.

Despite taking me around 120 hours to beat, I still found that I never had enough time to balance everything in Person 5. I had to make real-life decisions that affected my grades, skills, and relationships. The people I met along the way; Ryuji, Ann, Makoto. These characters became real to me. They became people I actually cared about. I considered at one point going back for a second playthrough. But that felt like cheating. Just like life, this was my story. And I had to accept the decisions I’d made. One night after laughing at Futaba’s jokes and planning what I’d focus on the next day to get my stats up, I realized. I’d forgotten about my break up for the first time in weeks.

It took me 3 months to beat Persona 5. Which for me, is a long time to dedicate to just one game. But it is probably one of the most memorable and life-changing experiences I’ve ever had. At the end of the game, all my friends in Tokyo set off on a road trip. Celebrating their friendship and everything they had achieved in the last year. And I sat back. With a smile. And thought about how I’d re-discovered my passion for gaming.