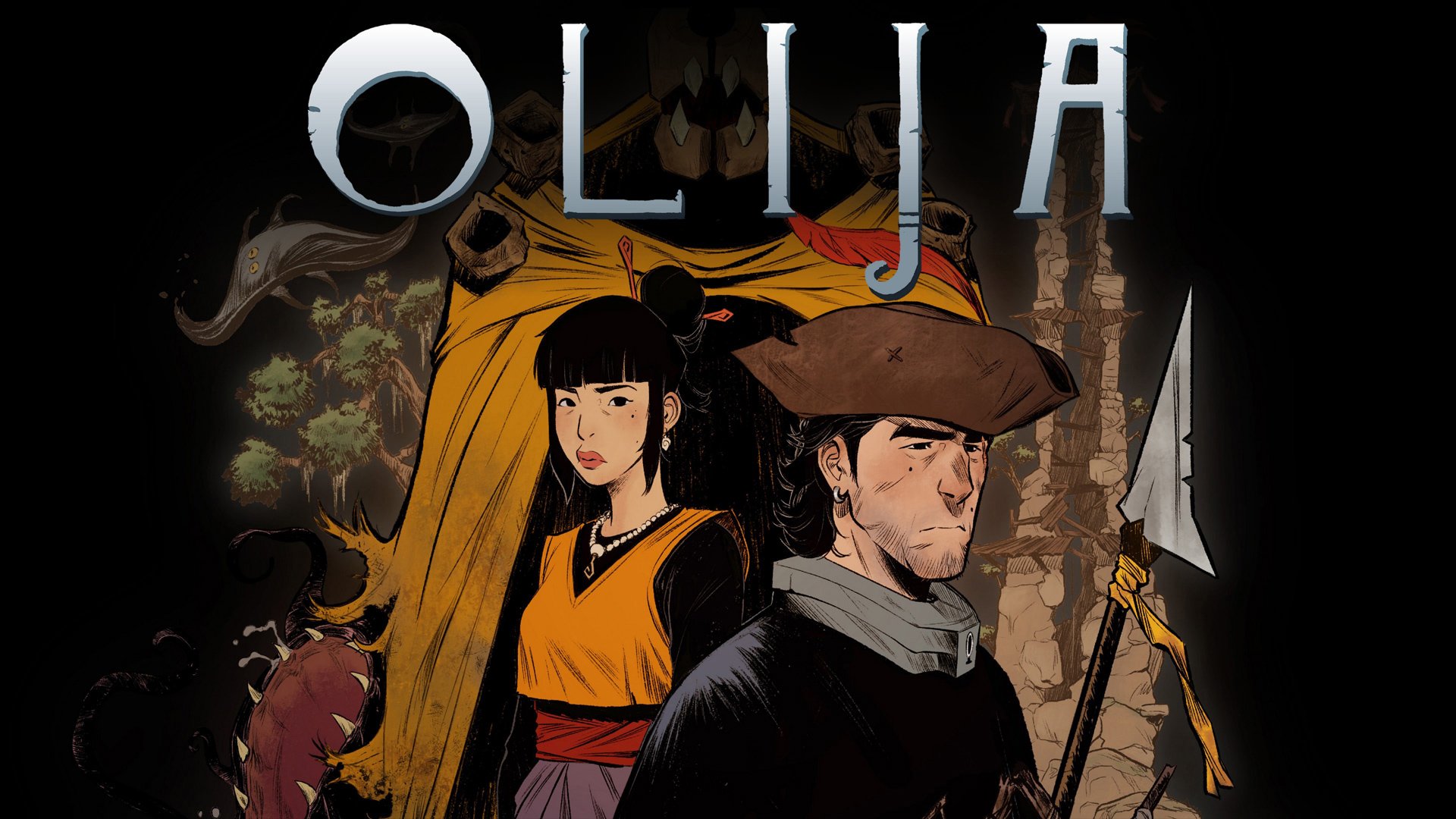 Olija, the latest action platformer from Devolver Digital, might look like just that on the surface: yet another pixelated indie game in a market saturated with titles in seemingly the same style and genre. However, Olija thrives by subverting expectations. It dances between genres: it is by turns a fast-paced action platformer, an atmospheric narrative-driven experience, and a methodical puzzle game. As disparate as these descriptions might sound, Olija masterfully weaves them together into a unique combination that’s an early standout in this year’s release schedule.

Voyaging in the Dark

From its opening moments, Olija builds a mysterious atmosphere. It follows a fallen lord named Faraday who gathers a ragtag band of followers on a voyage to discover new lands and resources. Before long, Faraday and his crew are shipwrecked in a strange island nation called Terraphage. The land lies under thick fog, plagued by demons and ruled by an elusive mistress – the eponymous Olija. As Faraday and his men seek to escape Terraphage and return home, they gradually unravel the island’s mysteries and get caught up in its spiritual and political struggles.

Olija keeps things vague. Its characters speak a mumbling, indecipherable language, and its conversations feel more like riddles than dialogue. It’s the kind of game that shows far more than it tells: through vivid pixelated cutscenes and strange hints sprinkled around its levels, it gradually unveils the mysteries that plague the island. These secrets are compelling, especially as the story eventually explores the complex relationship between Faraday and Olija herself. At times, the narrative can feel too cryptic for its own good, leaving more questions than answers even after the credits roll. However, not many games can create a setting that’s so absorbing in the first place.

The moments of silence are where Olija is at its best. When the hectic action dies down and Faraday experiences an honest encounter with a world he does not understand, Olija speaks volumes without using a word. Faraday and Olija’s wordless relationship has a tense poignancy leading to eventual romance that makes the subsequent moments of action that much more meaningful, adding a greater sense of personal urgency to Faraday’s quest. Even if the storytelling stays vague enough to keep it from entirely paying off in the end, its absorbing worldbuilding should be commended.

When it comes to its gameplay, Olija starts out deceptively simple. Its initial levels are primarily linear, dropping you into one of Terraphage’s handful of decrepit islands and requiring you to fight your way through hordes of demons to reach the treasure lying in wait at the end. Even in this straightforward beginning, Olija makes a solid impression. Its controls are fluid yet precise, and its engaging combat system allows you to string combos together using your fists or a handful of sub-weapons like a knife, pistol, or rifle. With the ability to switch between these weapons at a moment’s notice, there’s plenty of room for experimentation for any playstyle.

Things really get interesting when Faraday discovers the harpoon, the secret and most sacred weapon of Terraphage. Simply put, this single item changes everything. It gives you one core ability: after tossing the harpoon, you can instantly warp to wherever it lands. It can be used both in combat or in exploring the environment, and in either use it opens up whole worlds of gameplay opportunities. This weapon turns combat into a deliriously fast-paced affair, allowing you to maintain elaborate combos as you zip from one enemy to the other with the aid of your harpoon. It also adds a new degree of versatility to venturing through the world, allowing you to reach greater heights and cross wider chasms than would have been possible without it. The harpoon’s controls are a delight and making the most of its powers creates an enthralling flow of exploration and experimentation.

It is also at this time that Olija’s level design begins opening up. While it never progresses into a full-blown metroidvania, its areas eventually grow into larger sandboxes that task you with cleverly using the items in your arsenal and discovering hidden passageways to maintain progress. More and more abilities lie hidden throughout Terraphage to discover, including everything from more powerful weapons to game-changing mechanics that offer even more new gameplay possibilities.

As your capabilities expand, Olija finds new ways to test you. It eventually morphs into a puzzle game, tasking you with changing the environment to continue pushing forward. For example, around the halfway point of the game, you gain the ability to conduct electricity with your harpoon. In subsequent levels, you work to restore power to dead machinery by using your electrified harpoon as a way to connect devices to rejuvenate broken machines.

Olija’s puzzles are markedly more methodical than its often-hectic combat, and at first, the sudden emphasis on puzzle-solving might feel like it disrupts the game’s otherwise quick pace. However, this respite from the action is welcome, and its puzzles are satisfying to solve. They require players to understand the best ways to utilize every item in their arsenal, and they make Olija into a more well-rounded experience that requires you to leverage critical thinking just as much as your reflexes. This blend of breathless action and brainteasing puzzles creates a beguiling combination that keeps you hooked from the start to the finish of its roughly seven-to-eight-hour campaign.

Distinct music and visuals add to Olija’s overall atmosphere. Its soundtrack might not make an impression at first, but its silent strings and muted percussion add an ambient soundscape that emphasizes Terraphage’s exotic loneliness. Similarly, its animations are fast and fluid, with lush backgrounds and a muted color palette that accentuates the game’s brooding climate. Graphically, its stark pixelated minimalism – complete with faceless character sprites – only enhances the sense of isolation that makes Olija feel so special. It vividly creates an unmistakable setting by mixing a variety of cultural influences–such as Southeast Asian dress, Spanish fashion and architecture, and even some steampunk elements–to make Terraphage into a unique cultural mix.

However, the subdued colors and faceless characters don’t mean that the game lacks personality. Rather, it’s not afraid to get quirky, such as through its delightful Hat system. Using materials gathered across Terraphage, Faraday can create headwear that gives him special abilities like additional damage, poison resistance, or regenerating health – not to mention that they’re simply fashionable. From classical Spanish hats to straight-billed baseball caps, Olija’s hats add equal measures of style and strategy to the gameplay loop.

Literally and figuratively, Olija wears many hats. Its gameplay spans intense combat, ambiguous storytelling, devious puzzling, thorough exploration, and atmospheric worldbuilding. Most importantly, solid controls and engaging mechanics mean that Olija keeps you hooked from start to finish in every scenario. Its intentional vagueness might not be for everybody, but not many games achieve this same level of immersion and variety melded into a cohesive package. Whether or not you can make sense of every detail of its plot, there’s no denying that this harpoon-tossing adventure hits home in the end.