In commemoration of Goomba Stomp’s second anniversary staff list champion, our Level-by-Level feature will be diving into The Legend of Zelda: Ocarina of Time, dungeon-by-dungeon. Although Breath of the Wild is utterly superb, its reimagining of the Zelda formula is noticeably lacking classic dungeon design. This continuing series will take a look back at the entry that established the 3D dungeon template, in turn altering dungeon design in ways that would dominate and define the series for nearly twenty years. And since the 2011 3DS remaster makes a wide variety of changes to the original but remains equally masterful, I will be looking at that version alongside the 1998 Nintendo 64 release. In this entry, I will be examining Ocarina of Time’s ninth and final dungeon, Ganon’s Castle. 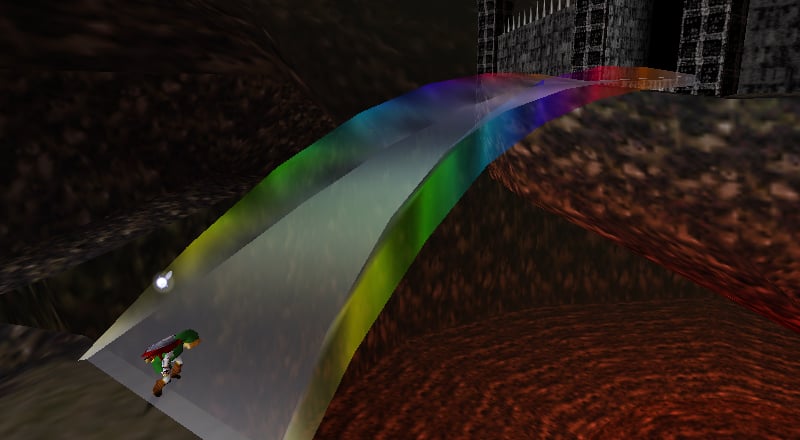 After Ganondorf kidnaps Princess Zelda and beckons Link to his castle, Link ventures toward Ganon’s Castle for a final showdown (perhaps making a pitstop at the middling Gerudo Training Ground along the way). Upon arrival, Link finds the castle bridge in tatters, but a rainbow bridge of light spawns in its place after Rauru telepathically describes the six evil barriers Link will have to destroy in the castle. With little delay, we reach the beginning of the end. 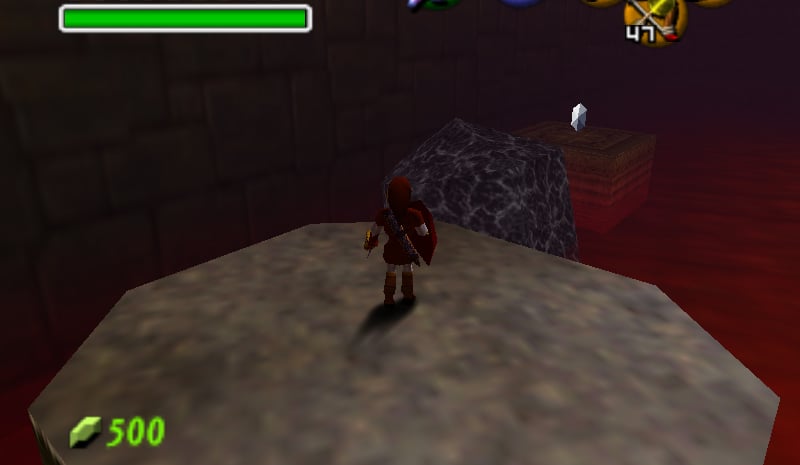 The first half of Ganon’s Castle has the player complete six paths, each representing a past dungeon. These paths generally consist of one to three rooms that combine combat, tricky traversal, and puzzle-solving while somehow incorporating elements of the dungeon the path represents. It’s a great concept for the final dungeon, but many of these paths aren’t anything like the dungeons they represent beyond some superficial similarities. For example, the forest path starts in a room that demands Din’s Fire or Fire Arrows while the subsequent room requires Hover Boots and the Long Shot to collect five silver rupees. This means none of the items required for the forest path nor the path’s three mains gimmicks (silver rupees, groups of torches, and fans) play a part in the Forest Temple, making the “forest” moniker feel entirely artificial. Unfortunately, this is a consistent theme, with no path feeling like it encapsulates the space it represents. The worst offender is arguably the water path, which is entirely premised around ice and doesn’t require any swimming whatsoever. Though I might personally find the ice-centric gameplay more enjoyable than swimming, it still feels out of place. Though most of the paths are enjoyable, it is disappointing to consider how more comprehensive and accurate paths that embraced the special qualities of each dungeon would have allowed the player to revisit the most prevalent themes, enemies, and puzzles from throughout their journey. The best path is the light path (representing the Temple of Time) due to its unique focus on illusion and in how encourages the player to extrapolate on what a full-length Temple of Time dungeon might be like. 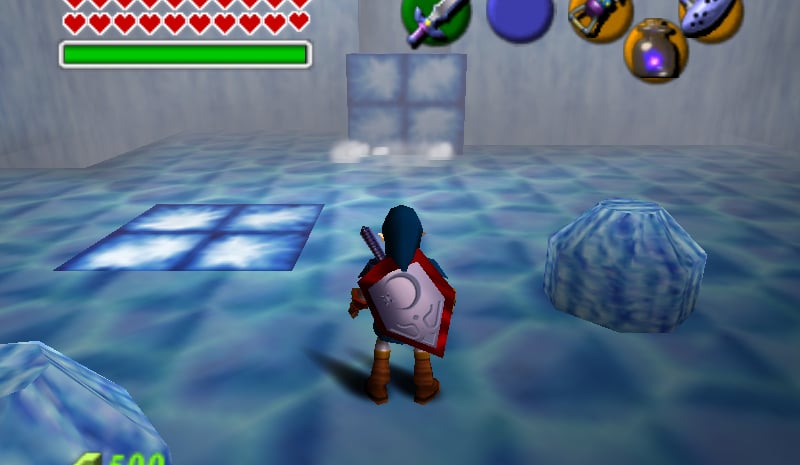 After completing these six paths, Link climbs the newly accessible tower and confronts an increasingly difficult series of combat scenarios. The second floor features Fire Keese the player can easily run past, the third floor has a pair of Dinolfos, the fourth a pair of Stalfos, and the fifth a pair of Iron Knuckles. These battles, though multiple are repeated from Gerudo Training Grounds, are mostly appealing fights that escalate tension and punctuate the long trip to the tiptop of the tower. Meanwhile, minor touches, like the music gradually crescendoing throughout the climb due to Ganondorf playing an organ at the top, and colorful light refraction through stained glass windows, provide a strong sense of place. 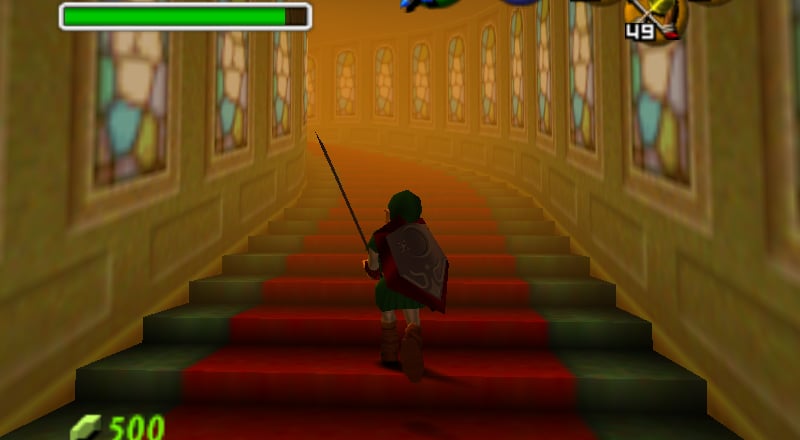 From a bird’s eye view, Ganon’s Castle looks like a wheel hub with six spokes. In the center lies the tower Link ultimately fights Ganondorf atop. Meanwhile, each of the spokes is one of the aforementioned pathways the player must pass through to destroy the six barriers blocking Link from entering the central tower. It’s a clean layout that emphasizes openness by giving players equal access to any path they choose, and it echoes the sense of all the player’s deeds throughout the game leading climatically toward a single centerpoint.

Indeed, the main theme here is the dungeon as a grand finale. Previously dungeons have dealt with multiple aspects of finality, from the Great Deku Tree’s dreary death, to the Forest Temple’s haunted ruins, to the Bottom of the Well’s grotesque decay, to the Spirit Temple’s recombination of past elements. Here, Ganon’s Castle ties many of these aspects together into a grand finale that acts as part heart-pounding climax, part bittersweet ending, part summation, and part culmination. It is in this sense a consummation — a point at which the game not just ends, but is also made complete. This is made clear through several design decisions, such as the previously discussed topography, the escalating battle intensity as players climb the final tower, the six challenges representative of past dungeons, and the need to tackle those challenges by fluent and fluid use of nearly all past dungeon items. Even the bridge Link walks over to access Ganon’s Castle is rainbow in color, itself a nod toward all aspects of the game finally converging. Meanwhile, the narrative brings back the Sages who stand in for the various regions of Hyrule, Ganondorf has captured Zelda, and Link must finally battle Ganondorf in a multi-stage battle so ferocious it sends Ganon’s Castle crumbling to the ground. 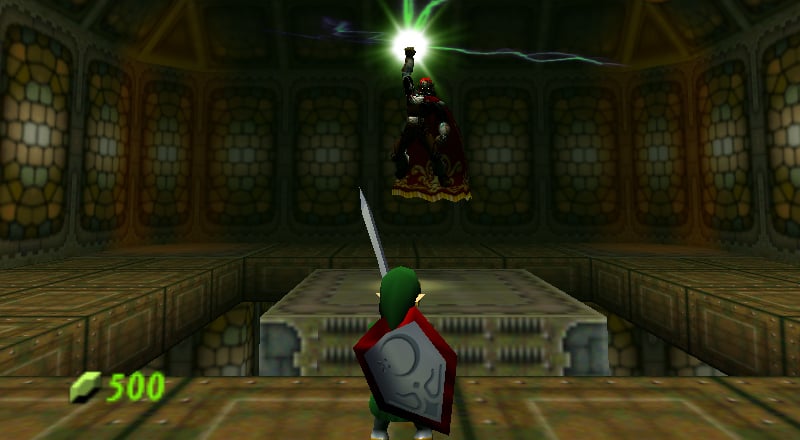 Ganon’s Castle’s item are the Golden Gauntlets, upgraded gauntlets that allow Link to pick up a few large obelisks. Like the Silver Gauntlets, they disappoint because they feel arbitrarily tacked on to structure progress and perform essentially the same function as a previous item. In this case, the gauntlets ensure the player must pass through the shadow path before the light and fire paths. Postponing the light path makes sense in that it is a sort of “ultimate” path that doesn’t correspond with any previous dungeon, but postponing the fire path seems illogical, especially since the Fire Temple is the second temple adult Link conquers. Furthermore, the Golden Gauntlets are only used inside the dungeon twice and outside the dungeon once, in order to access a fairy fountain next to Ganon’s Castle. All told, the Golden Gauntlets are an underwhelming item that add very little to the dungeon, but Ocarina gets away with it because introducing a fully fledged item this late would be a waste anyway. They are a nifty enough bonus with a couple of strange implementation issues, and at least they play a more significant role than the completely extraneous Ice Arrows. 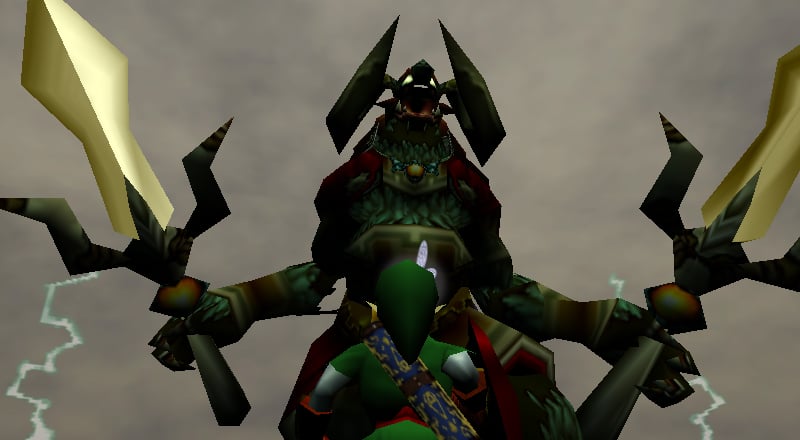 Fittingly, Ganon’s Castle’s boss fights are against Ganon and his humanoid version, Ganondorf. The fight against Ganondorf borrows heavily from the battle against Phantom Ganon in the Forest Temple, requiring Link to volley an energy orb between himself and Ganondorf. The catch is this battle takes place atop a tower and Ganon can send pieces of the floor Link is standing on plummeting below. A quicker climbing animation could have made the long climb back up less sluggish and a more diverse array of attacks could have made this lengthy battle less repetitious. But these are minor gripes in what is otherwise a captivating battle driven by a strong sense of climax. But this climax is only heightened as Link and Zelda escape the crumbling castle after the battle only to discover Ganon is still alive. Sans Master Sword (for the battle’s first half), Link must now confront beast mode Ganon in a no holes barred battle of courage, power, and wisdom. Both portions of this fantastic final fight are nail-biting struggles that demand quick reflexes, timely aggression, and shrewd strategizing. Kudos to both the Ganondorf and Ganon fights for allowing a breadth of play styles rather than demanding a single specific strategy. This is the kind of open-design combat that Breath of the Wild would borrow from and evolve twenty years later. 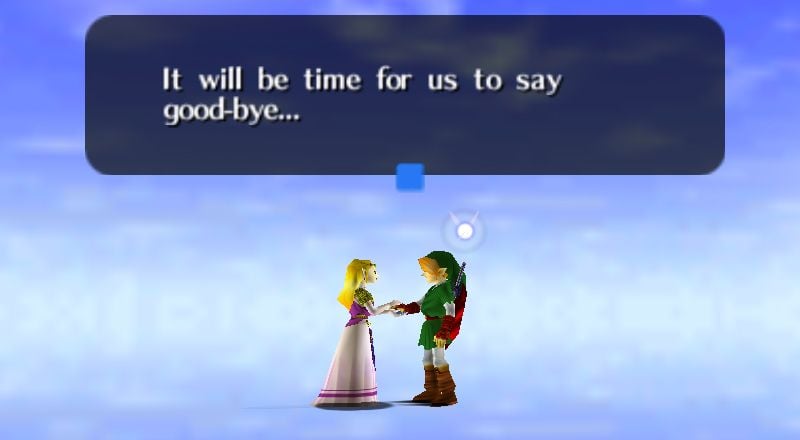 As a whole, Ganon’s Castle is a suitably grand finish to Link’s journey through every inch of past and future Hyrules. Although each of its paths could have better integrated aspects of each dungeon to more effectively evoke the varying types of enemies, obstacles, and puzzles the player has overcome, every step forward effectively builds toward the incredible climax that Ganon’s Castle is primarily concerned with. It might lack a great item, or new enemy types, or the nuanced design of the Spirit Temple, but it generally succeeds in turning the narrative and gameplay to eleven while intermingling them in a compelling and memorable way. If not every individual element succeeds on its own merits, those elements add up to far more than the sum of their parts. In the end, despite its shortcomings, Ganons’ Castle turns out to be a final dungeon befitting Goomba Stomp’s greatest Nintendo game of all time.