In commemoration of Goomba Stomp’s second anniversary staff list champion, our Level-by-Level feature will be diving into The Legend of Zelda: Ocarina of Time, dungeon-by-dungeon. Although Breath of the Wild is utterly superb, its reimagining of the Zelda formula is noticeably lacking classic dungeon design. This continuing series will take a look back at the entry that established the 3D dungeon template, in turn altering dungeon design in ways that would dominate and define the series for nearly twenty years. And since the 2011 3DS remaster makes a wide variety of changes to the original but remains equally masterful, I will be looking at that version alongside the 1998 Nintendo 64 release. In this entry, I will be examining Ocarina of Time’s eight dungeon, the Spirit Temple. 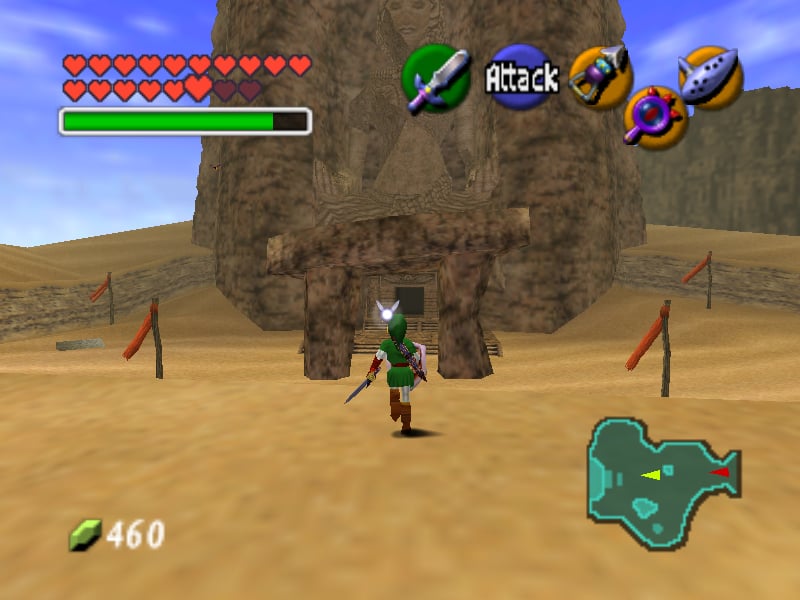 The trek to the Spirit Temple is among the most lengthy and treacherous in the game, including a stint in a Gerudo jail to rescue four imprisoned carpenters and a ghost-guided tour through the Haunted Wasteland desert. The jailbreak sequence is Ocarina’s deepest dive into stealth gameplay, and it stands out as one of the most frustrating, finicky, and repetitive sequences of the game. Fortunately, the subsequent desert pathfinding sequence is much more enjoyable, although it is best tackled with a magic meter about halfway full since it is nearly impossible with less magic but too easy with a full meter. Both of these sections, then, could benefit from a little more streamlining. Unlockable shortcuts in the prison would minimize backtracking and make the vaguely communicated stealth mechanics less of a hassle. Meanwhile, if the player were limited to a specific amount of magic during the desert trek, it would balance difficulty and provide a more engaging experience wherein the player must strategically flip the Lens of Truth on and off to conserve magic without having to worry they will entirely run out.

After traipsing through the Haunted Wasteland, Link stumbles upon an oasis housing the colossal Spirit Temple. Modeled broadly after desert cultures, the temple appears carved in rock like the archeological city of Petra, but features Egyptian sculptural flourishes and vaguely Mediterranean artwork inside. The player ventures here three times — first as an adult where Sheik tells to return as a child, second as a child to retrieve Silver Gauntlets for Nabooru (who is kidnapped by the boss shortly after Link discovers those gauntlets), and finally once more as an adult to conquer the second half of the temple, where he discovers a brainwashed Nabooru he must put to rest before fighting the boss. Having to travel back and forth between the Temple of Time can be a slog, and the child and adult portions of the dungeon feel arbitrarily and superficially cut off from each other. Still, it feels as though Link is playing an active role in a dungeon-specific story, a story that incorporates Ocarina’s defining time traveling mechanic in a way no other dungeon attempts.

This ludonarrative consonance is enough to make the Spirit Temple stand out from the pack, but its shrewd design makes the Spirit Temple one of Ocarina’s crowning achievements. Almost every room houses a unique challenge that cohesively incorporates combat, puzzle-solving, and traversal to offer a well-rounded but versatile experience. Even the comparatively weaker first portion of the dungeon combines multiple enemy types, silver rupees, and climbing. Admittedly, there are a couple of optional rooms that provide so little challenge or feature such a generic scenario that they feel like filler only included to make the dungeon seem less linear than it is.

And for a late-game dungeon, the Spirit Temple is defiantly linear, comprised of two parallel paths (the child path and the adult path) that are both undeviating sequences of rooms. On one hand, this linearity provides a sense of forward propulsion that might contribute to the dungeon’s climactic tenor and narrative force. On the other hand, it could have been incredible to revisit a room as child Link, adult Link, and adult Link with Mirror Shield to gradually unravel that room’s mysteries in Metroidvanian fashion. Instead, the player is always compelled to press forward, offering a sense of drive but detracting from the dungeon’s overarching sense of purpose. 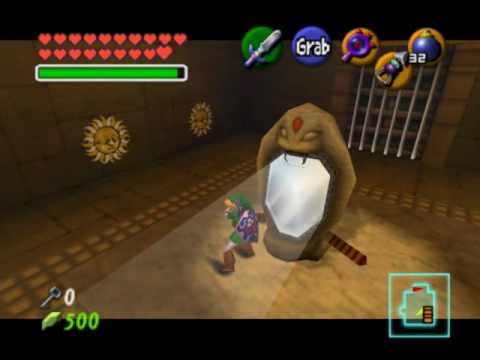 More than anything, though, the Spirit Temple is built around its core theme — duality. From the symmetrical layout, to returning as a child and adult, to the boss duo, the dungeon item’s reflective ability, the concepts of duality and doubling are present in nearly every aspect of the Spirit Temple’s design. Perhaps more so than any other dungeon, the Spirit Temple’s theme is so deeply plumbed and thoroughly considered it is sometimes hard to believe such depth of thought went into such a small portion of such an early 3D game. That a game from 1998 would tinker around with such a complex idea as someone being both the opposite and the reflection of themselves, evinces the singular maturity and ambition of Ocarina’s design.

Complementing this duality, the Spirit Temple is also a space of compilation. Here, past experiences are distilled and regurgitated, like hasty memories that combine and compress prior events to shape something entirely new. Numerous elements of past dungeons are reintegrated throughout the Spirit Temple, often combined in more elaborate scenarios than they were previously featured in. From puzzle gimmicks like silver rupees and blocks, to enemies from almost every past dungeon, to nearly-forgotten items like Bombchus and Din’s Fire, the Spirit Temple might be a more thorough culmination of everything the game has to offer than even Ganon’s Castle. That the dungeon features no new enemy types outside of its boss and stunning Iron Knuckles mini-bosses scarcely matters when past elements can be recombined in such wholly crisp and unique ways. 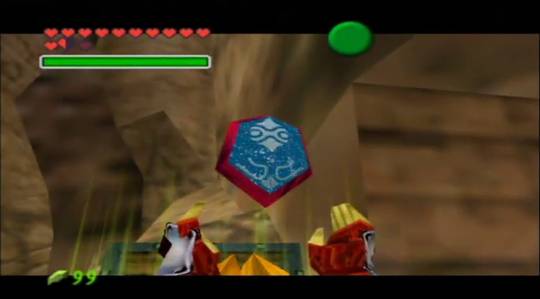 Feeding into the dungeon’s emphasis on duality, the Spirit Temple contains two new items — the Silver Gauntlets and the Mirror Shield. And in keeping with the same/not-same theme, one item is a flub while the other is a revelation. The Silver Gauntlets are a shallow pseudo-item that offer nothing substantial to the experience, merely allowing Link to pass through the hamfisted checkpoint of picking up particular rocks that can’t be bombed. It’s hard to fault them, though, when they are only a sort of mini-item (a la mini-boss) that is mostly used as a minor upgrade and narrative marker. The Mirror Shield, however, is one of the most brilliant items in any Zelda game (or, for that matter, any game I can think of). It is a completely original concept and perfectly suits the dungeon’s theme and design. Mechanically, it introduces new possibilities to both combat and puzzle-solving, while also asking players to reconsider the space they’re in as a playground of light. Although the possibilities the Mirror Shield introduces would be taken further in subsequent entries, even its original manifestation here is so pioneering that it could be the basis for a modern-day indie game. 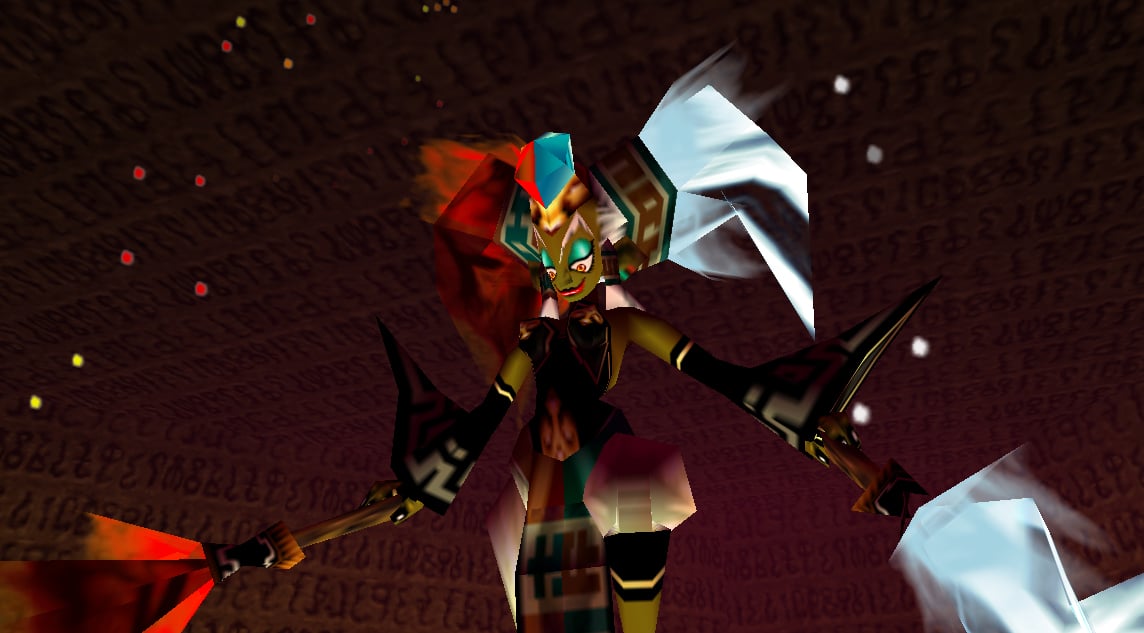 Twinrova, the pair of witches that act as the Spirit Temple’s boss, concludes the dungeon on a high note. Combining fiery characters with diverse uses of an ingenious item, the fight is stylistically and conceptually fantastic. So much so that the franchise would revisit this form of boss design in several future installations, expanding upon the strong foundation here. Unfortunately, the second phase of the battle requires significant amounts of waiting around, exacerbated by sluggish enemy movement and a predictable attack pattern the player must sit through multiple times. Were this second phase quickened and made less predictable, Twinrova would rank alongside the Forest Temple’s Phantom Ganon as one of Ocarina’s finest boss fights.

There is a convincing argument to be made for the Spirit Temple as Ocarina’s greatest dungeon. Room by room it thoroughly integrates countless elements of Ocarina’s design into a gauntlet of thoughtful challenges. It feels fittingly mature, not toying with or fetishizing any individual element of its design, but allowing for intelligent, industrious, deliberate design to speak for itself. In this way, the Spirit Temple’s design encapsulates its themes of growth and reflection, and imbues childlike wonder alongside an adult purposiveness. For these reasons and more, the Spirit Temple may be the “ultimate” Ocarina of Time dungeon. Indeed most of the elements that account for the game being heralded as one of the greatest games of all time are in full bloom here. Its major fault is that it sometimes doesn’t evolve these ideas as thoroughly as ideal, especially time-traveling. Despite this, the Spirit Temple just might be Ocarina’s definitive dungeon, and among the best-designed spaces in the entire series.