In commemoration of Goomba Stomp’s second anniversary staff list champion, our Level-by-Level feature will be diving into The Legend of Zelda: Ocarina of Time, dungeon-by-dungeon. Although Breath of the Wild is utterly superb, its reimagining of the Zelda formula is noticeably lacking classic dungeon design. This continuing series will take a look back at the entry that established the 3D dungeon template, in turn altering dungeon design in ways that would dominate and define the series for nearly twenty years. And since the 2011 3DS remaster makes a wide variety of changes to the original but remains equally masterful, I will be looking at that version alongside the 1998 Nintendo 64 release. In this entry, I will be examining Ocarina of Time’s eighth and a half dungeon, Gerudo Training Ground. Since Gerudo Training Ground is a mini-dungeon, and its official status is still disputed amongst fans, I have written a mini-analysis to suit its stature. 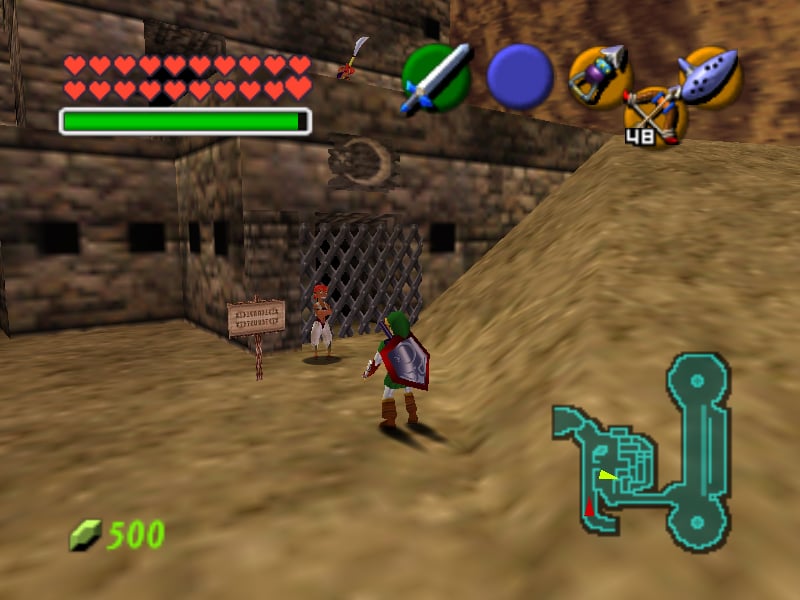 After the Spirit Temple, Link returns to the Temple of Time to discover Sheik’s true identity in one of Ocarina’s most unforgettable moments. This cutscene arguably marks the game’s narrative high point, revealing the whereabouts of the missing Princess Zelda while folding that discovery seamlessly into the overall narrative in a sleight of hand still difficult to predict twenty years later. Afterward, Ganondorf kidnaps Zelda and taunts Link to come to his castle for a final showdown. Before that, however, Link can venture back to Gerudo Fortress for the optional mini-dungeon, Gerudo Training Ground. But since no map marker, NPC, or Navi interruptions points the player in that direction, most players will likely never realize the mini-dungeon exists until consulting a guide. It’s strange just how easily Gerudo Training Ground can slip under the player’s radar, and one has to wonder if the designers weren’t suggesting players overlook this small snippet of extra playtime, perhaps because it is not necessary to complete and it detracts from the narrative’s forceful momentum at this pivotal point in the game.

The Gerudo Training Ground is essentially a grid of eleven interlocking rooms. Two of those rooms are the entry foyer and a central room with nine locked doors the player must unlock to collect the dungeon’s item. The remaining nine rooms hold isolated trials that demand the player overcome a specific scenario (i.e. defeat enemies within a time limit, collect rupees, etc.) to collect small keys. Most of these keys are earned by completing a specific task levied by pop-up text, but some are hidden, including a couple where the player must examine random walls with the Lens of Truth to find hidden pathways the player couldn’t otherwise infer is there since the mini-dungeon is curiously lacking map and compass. Those Lens of Truth keys are not only irritating, but also poorly designed — slapdash tomfoolery to which we shouldn’t expect Ocarina of Time to stoop. Meanwhile, the isolated challenges are generally decent, but primarily consist of reusing assets from other dungeons and applying some kind of limitation to them, such as a time limit or environmental hazard. These rooms vary in quality, with none standing out as particularly terrible or brilliant. It’s also worth noting that the only new enemy here is the Dinolfos, which is basically a more aggressive Lizalfos. With no new boss and only one room featuring the Dinolfos, Gerudo Training Ground typically piles enemies on top of each other in a superficial attempt to balance for end-game difficulty. In this regard, Gerudo Training Ground feels like a design warm-up for Twilight Princess’ Cave of Ordeals. 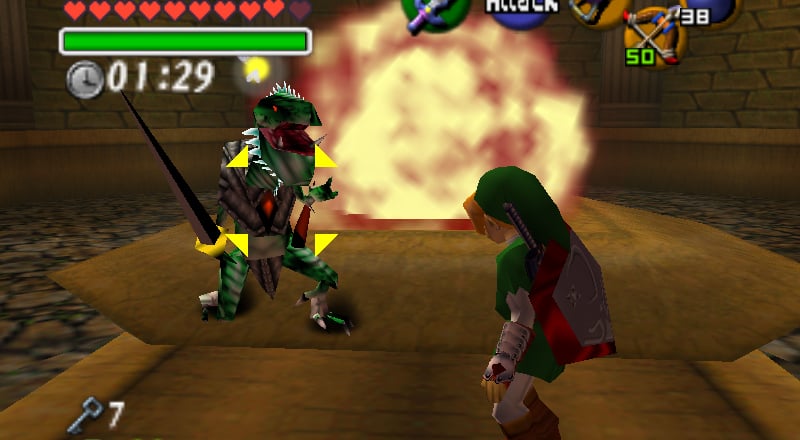 If the Gerudo Training Ground has a theme, it is derivation. Although its rooms are tied together by the overarching goal of collecting keys, they otherwise feel completely disconnected, with art style, enemy variety, and puzzle type changing dramatically room by room. While the Spirit Temple also heavily reuses assets, it uses them to form thoroughly developed schemes. Here, assets are haphazardly copy-pasted into shallow and inorganic scenarios. While the Spirit Temple never has to rely on a gimmick like a time limit, Gerudo Training Ground is constantly banking on difficulty and tricky (but not thoughtful) design to appear more interesting than it is. Though rarely heinous, Gerudo Training Ground is overflowing with what feel like leftover alpha versions of Spirit Temple rooms. It is a mishmash of ideas that plays more like a hall of disconnected contests than a thematically or procedurally unified space. 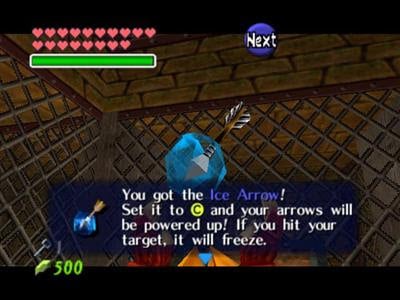 After unlocking enough doors in the central room, the player earns the Ice Arrows. On one hand, the Ice Arrows are powerful potshots that imbue a rare status effect (and they’re undeniably 90’s cool). Yet outside of freezing enemies they are identical to the regular arrows Link uses throughout most of the game, and acquiring them is completely optional. Unfortunately, that means no specific challenge requires using the Ice Arrows, which translates to there being nothing in the game designed with the Ice Arrows in mind. And since the player has probably already earned the Light Arrows, the Ice Arrows essentially serve no purpose — not even in the mini-dungeon in which they are found. Like the rupees found in Gerudo Training Ground’s numerous treasure chests, the Ice Arrows are superfluous, bizarrely introduced at the last minute to serve no meaningful function. 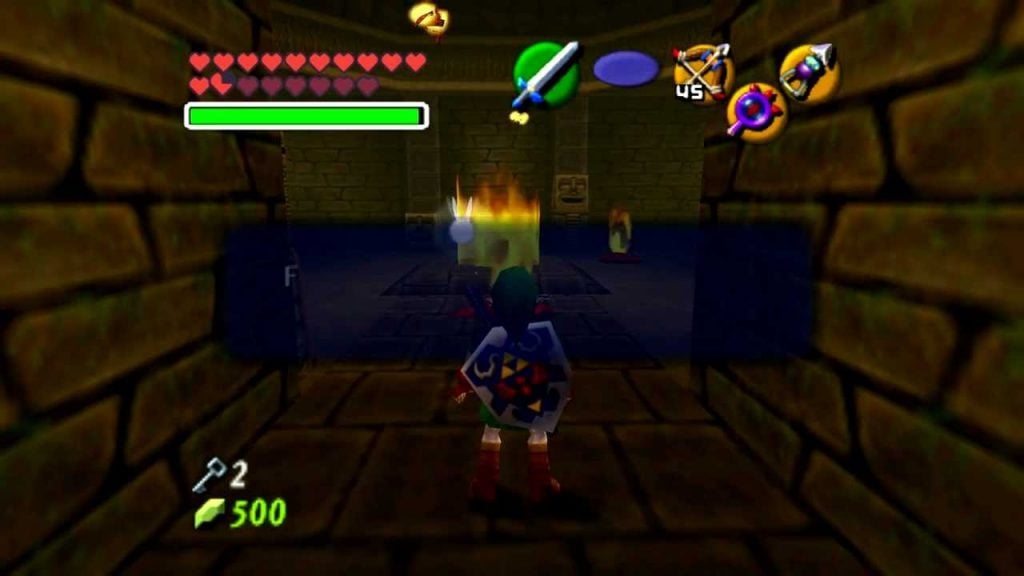 As a whole, Gerudo Training Ground feels feel like a disconnected series of Spirit Temple B-sides not quite special enough to make the big leagues. Because Ocarina’s base gameplay is so solid, it is worth playing through Gerudo Training Ground simply because it is more Ocarina to play through, but it largely falls flat on its own merit. A couple of its rooms stand out as well-balanced and thoughtful, but most are at least slightly underbaked. And in a dungeon with only eleven small rooms, each room counts for a lot, and some completely fail to deliver. After the game’s most mature dungeon, Gerudo Training Ground is a noticeable step back toward superficiality. It is completely playable and often enjoyable, but also undeniably embryonic and carelessly tacked on — a polar opposite of the Spirit Temple’s design ethos despite their many surface-level similarities.