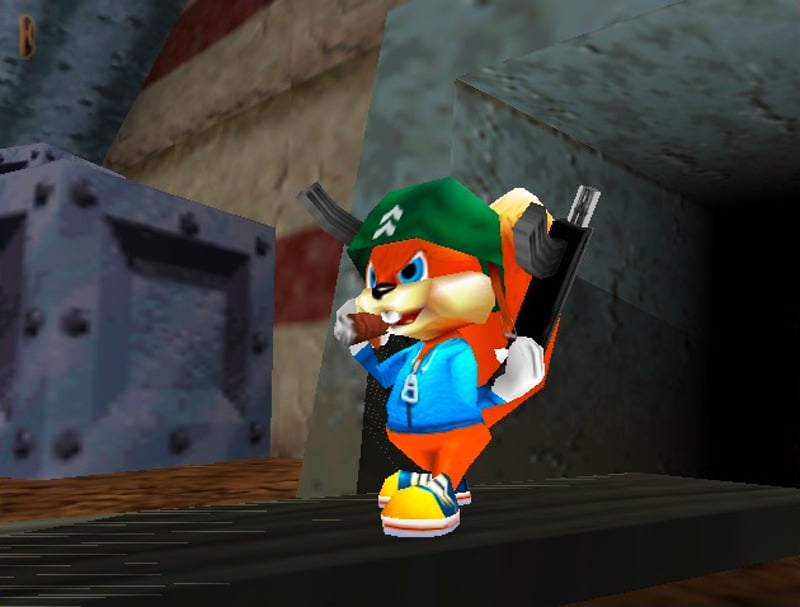 If this were the Baseball Hall of Fame, then Conker’s Bad Fur Day would be our lovable Ty Cobb: filthy, lewd, violent, and often completely hammered. Forget actual talent; these qualities are enough to make Conker stand out from the giant sea of poo called mediocrity, and it’s that initially shocking and completely hilarious crude personality that makes Conker’s Bad Fur Day one of the most entertaining experiences on the N64 or anywhere else.

Where else can you help a lascivious bee make it with a large-breasted sunflower, fight a terminator haystack, storm the beaches in a war with fascist teddy bears, defeat an operatic pile of corn-riddled feces, and take on a xenomorph with the help of the game’s developers? All this and much more awaits the hungover squirrel on his journey to get home to, then rescue his buxom bunny girlfriend. British voice actors bring indelible wit and variety to the smartly-written script (especially those lines involving a bevy of curse words more creative than sailors could dream of), and the world of Conker’s Bad Fur Day feels alive, with nearly every object anthropomorphized, down to cheese that screams and sobs for its life or wads of mafia-accented cash scattered about that taunt the player from nooks and ledges.

So much is packed into Conker that the game almost demands multiple playthroughs in order to catch all the jokes. Luckily, the platforming that gets the besotted hero from movie spoof level to movie spoof level isn’t nearly as crude as its sense of humor, and ends up being quite serviceable. The gameplay won’t be winning any design showdowns with a certain upstanding plumber’s franchise, but that isn’t the point of Conker’s Bad Fur Day. Each stage serves as a gateway to Rare’s delightful debauchery, and the laughs keep coming all the way to the sobering end, a tonally perfect finish to an epic quest filled with lust, greed, and urination.

For fans who think Nintendo consoles were or are simply for kids, Conker’s Bad Fur Day is not to be missed; for everyone else, it’s simply one of the best.