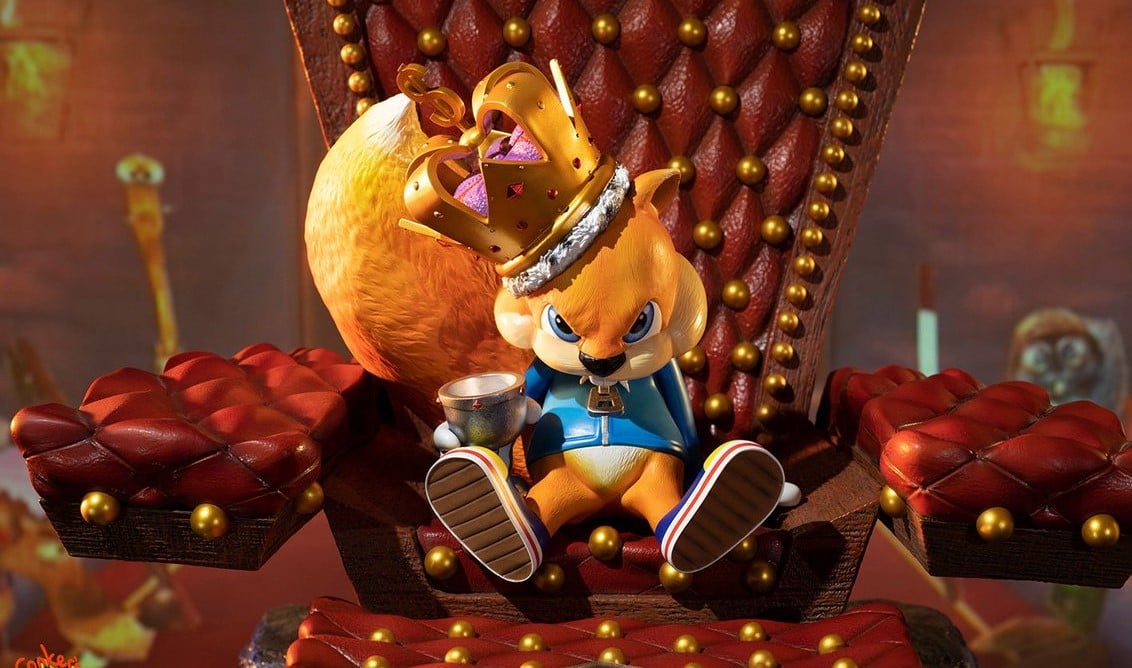 Judging by the Disney-like presentation, some may think that Conker’s Bad Fur Day is a harmless video game about a squirrel who is trying desperately to save his girlfriend. Rare, however, opted to deliver something flamboyantly vulgar and determinedly self-referential. Right from the start, Conker’s Bad Fur Day indulges heavily in lurid situations. The game contains graphic cartoon violence, alcohol use, drug use, profanity, dark humor, and sexual content that is inappropriate for gamers under the age of 18. Throughout the course of the game, you’ll sing along with the Great Mighty Poo (an opera-singing boss made entirely out of crap) and come across graphic depictions of morose scenarios. Conker’s Bad Fur Day has the shape of a Nintendo IP but the soul of a Stanley Kubrick film.

Conker’s Bad Fur Day was in development for four years and was originally intended for a family audience under the title Conker’s Quest, then retitled Twelve Tales: Conker 64. However, the prototype was criticized as being too cute and similar to Rare’s earlier platform games. Rare took the constructive criticism well and decided to retool the game for mature audiences instead.

Conker’s Bad Fur Day received critical acclaim from video game journalists, who praised its visual appeal and smart, funny humor, but while Rare’s controversial switch from a cute to shit-faced Conker resonated well with fans, Nintendo wiped its hands clean of the project and left Rare to publish and advertise the game on their own. Ultimately, Nintendo denied Conker’s Bad Fur Day an opportunity to find a bigger audience, and due to limited advertising and a release towards the end of the Nintendo 64’s life cycle, it was a commercial flop. Regardless, twenty years later and Conker has earned a loyal cult following due to its unique style and its boundary-pushing story.

Rare’s final Nintendo 64 game is perhaps the N64’s most visually impressive. The game pushes the console to its graphical limit and contains almost two hours of cut-scenes (see the video below), with fully animated character faces perfectly synched to some impressive voice acting. Conker’s limitless facial expressions accurately convey the rodent’s feelings on the fly whether he’s frustrated, sad, happy, or angry — which brings me to the point of this article.

Apart from the opera-singing pile of crap, the stunning visuals, the catchy soundtrack, and the loveable protagonist, one of the main reasons why the game resonates with so many people decades later, is because of the bleak and emotionally devastating climax. At the end of Conker’s journey, he and the love of his life Berri, make it to the reserve where Conker is awarded one million dollars for his achievement. Just when he has everything he’s always wanted, the Panther King instructs The Don to brutally murder Berri in front of Conker’s eyes. From there, the gut-punch of a climax sees Conker do battle against what is essentially the Xenomorph from the movie Alien. Just as the alien lunges, the game freezes, and in one of gaming’s finest moments of breaking the fourth wall, Conker turns to the screen and addresses the developers of RareWare, asking them to transport Conker somewhere of his choosing if he defeats his enemies. Only making a deal with the “devil” doesn’t bring Conker any happiness. Despite saving his own skin and becoming king of all the land, Conker fails to save Berri, and despite having all the money at his fingertips, the one thing he truly wants he can’t have. As he sits on his throne, surrounded by various characters he met in his adventure, Conker delivers his final monologue in a sequence that mirrors the intro in reverse. For the first time in perhaps the history of the medium, our video game protagonist is left with nothing but an unfulfilled, depressing ending.

It’s easy to see why Conker’s Bad Fur Day is so beloved after all these years. Conker was and is everything that Nintendo has raised audiences to believe heroes are not. He’s crass, selfish, and with a vocabulary that would make Eddie Murphy blush, but in those final moments that mirror Alex in A Clockwork Orange, Conker shows he’s no different than us. Conker’s Bad Fur Day is a rare game that hits you in the head and stomach simultaneously. The only rule it adheres to is that tropes are made to be eviscerated, turned upside down, and crushed. Sure it is raunchy and politically incorrect at times, but Conker’s Bad Fur Day avoids enough pitfalls to both embrace and flambé the genre. Conker’s Bad Fur Day is a rare gem, and it just so happens to culminate with one of the greatest endings of all time.