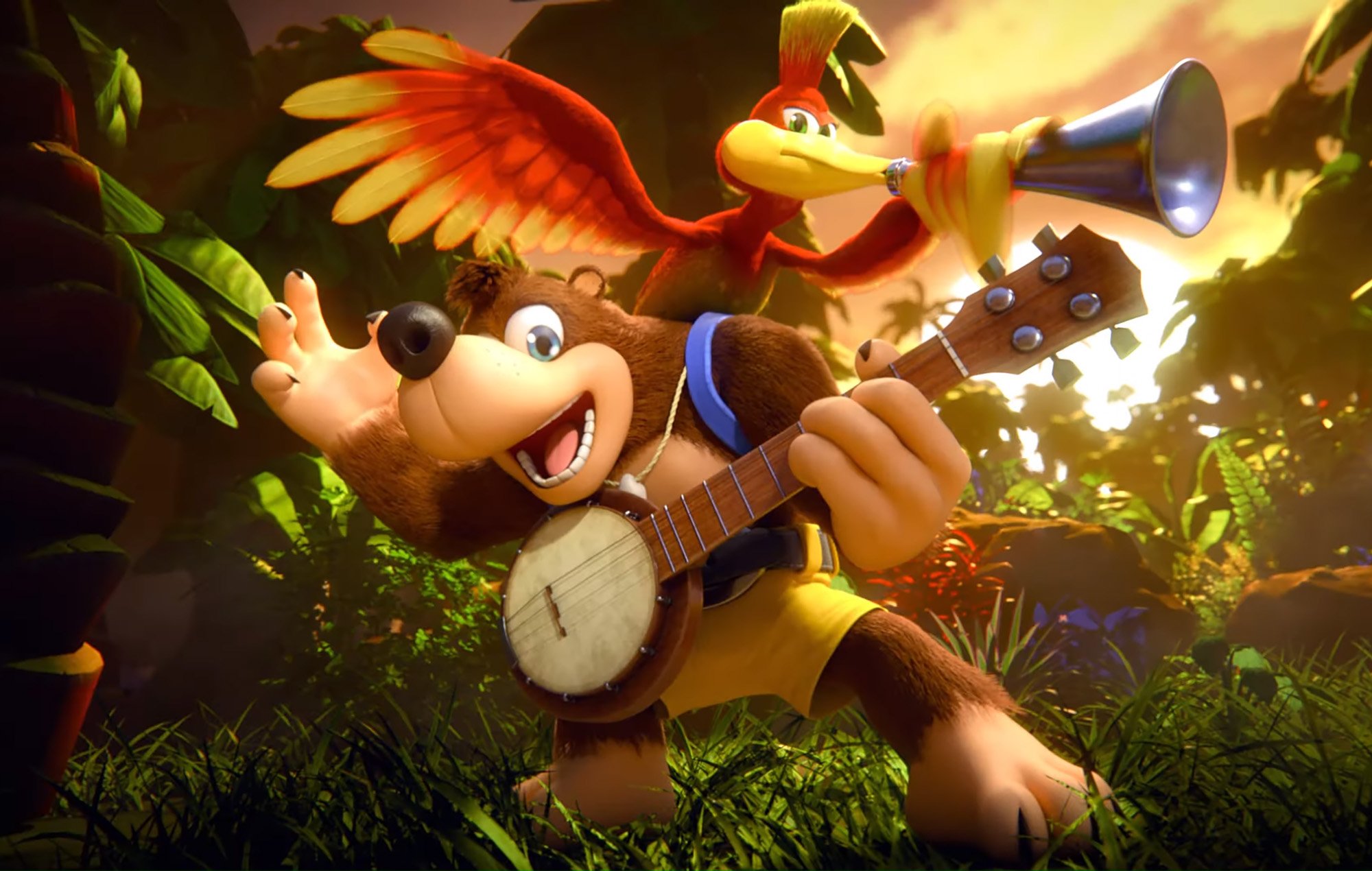 A bear with a bird in his backpack on a quest to save his kid sister from the grasp of an evil witch. At first glance, it seems like quite an outlandish plot, but when compared with the rest of Rare’s work on the N64, it’s actually par for the course.

It’s no secret where the inspiration for Banjo-Kazooie came from. In 1996 Super Mario 64 changed gaming forever by ushering in the age of the 3D platformer, and in 1998 Rare took Nintendo’s mold, altered it ever so slightly, and created their own special little gem. SM64 had Mario traveling around the hub zone of Peach’s castle, and teleporting to differently themed worlds to collect stars in order to progress deeper into the game. Switch Peach’s castle with Gruntilda’s lair, and swap stars for puzzle pieces and you essentially have Banjo-Kazooie. Gold coins became music notes, red coins became jinjos, and the similarities don’t end there, but in spite of all their commonalities, there’s just something about Banjo-Kazooie that makes it stand out as so much more than a simple clone.

Banjo-Kazooie is filled to the brim with charming characters and delightful humor. From Kazooie’s brash attitude that she uses with pretty much everyone she meets, to all the unique characters you encounter in the game’s nine different worlds, Rare infused the game with so much personality that you’ll have a hard time wiping the smile off your face as you play. It speaks volumes that side characters like Clanker the giant garbage disposal and Gobi the camel have more personality than any characters in Super Mario 64, including Mario himself. It’s no surprise that the minds behind this game would later go on to create Conker’s Bad Fur Day. Banjo-Kazooie certainly doesn’t push the envelope as far as Conker did in terms of raunchy humor, but they slipped a few double entendres and risqué jokes in there, like Kazooie’s reaction to learning that one of her abilities involves shooting projectiles out of her butt, or the oddly placed fact that Gruntilda’s favorite party trick is performing a striptease.

Much like the game’s characters, the nine different worlds you visit are all memorable and unique. From Clanker’s Cavern to Rusty Bucket Bay, all of the levels are vastly different in terms of both layout and theme. Upon entering each new zone, the player isn’t given direction on where to go or what to do. Each level has 10 puzzle pieces to find, but they can (for the most part) be collected in any order. Instead of being forced down a linear path, you’re encouraged to simply look around, go where you want to go, and discover at your own pace. Level design and complexity ramp up significantly as the game progresses, but at such a smooth pace that you really don’t notice it until you look back and compare the first couple of worlds to the last few you unlock. While Mumbo’s Mountain is incredibly small and can be 100% completed in just a few minutes, Mad Monster Mansion can have you searching for those last three music notes for hours. The game’s final stage, Click Clock Wood, is incredible and to this day stands out as one of the most interesting level designs in any platformer. The level is split up into 4 seasons: spring, summer, autumn, and winter. Due to changes in the climate, certain objectives are only obtainable during certain seasons, so players need to take mental notes and remind themselves to go back to so-and-so a place during a certain season. A few puzzle pieces require the player to perform tasks during all four seasons, and the music notes are spread out throughout all the seasons, so it’s easy to miss something. After you’ve completed all nine worlds, instead of going straight to the final boss fight, you get to compete in a quiz show! With Banjo-Kazooie you never know what’s going to be around the next corner, but you can be certain that whatever it is, it’ll be entertaining.

Each level is accompanied by a set of catchy and timeless music tracks. Perhaps the coolest part of the game’s sound design is how the music dynamically changes depending on where you are in the level. When you dive underwater it’ll sound like your sound system has been submerged with you, and when you enter a house or a cave the track will seamlessly change to suit your new environment. In most games, sounds that repeat every time you pick up an item get annoying pretty quickly, but in Banjo-Kazooie, a game where you literally collect hundreds of things, the sound effects never get old. Like all other aspects of the game, the sound design has a certain charm to it that never expires.

Running, jumping, and climbing your way through the game’s worlds is a treat. All of the abilities at your disposal are both fun and useful, plus they’re animated just perfectly, and the game’s controls are tight and responsive. Unlike some other great platformers, Banjo-Kazooie doesn’t require pixel-perfect jumps, but there are a few decently challenging segments in the later levels. The type of gameplay on display here is just timeless and infinitely playable. Whether you played it on the N64 back in 1998, or just loaded up the game for the first time in 2016 on your Xbox One, it doesn’t matter, you’re going to have a good time. While many games from the PS1/N64 era have the reputation of aging poorly in terms of visuals, Banjo-Kazooie on the N64 still looks surprisingly good. Plus, in 2008 the game was remastered for the Xbox 360, so the version of the game that’s packaged in Rare Replay features a 16:9 widescreen display and 1080p high definition resolution.

Whether playing the original or the re-master, there’s only really one gripe I have that really sticks out: the camera. Allowing the player to have complete control of their movement in a 3D space, while simultaneously letting them control the camera was still a relatively new concept back in 1998, and it shows. Often times the camera will suddenly jerk to one side, causing you to walk off a ledge and fall to your death. Whenever you find yourself in a confined area, the camera will zoom in super close, making any sort of maneuvering awkward. It certainly isn’t awful to the point where it’ll make you put the controller down and walk away, but you’ll probably die a handful of times due to the camera alone.

The development of Banjo-Kazooie was clearly a labor of love. From the excellent level design to the unhinged humor and everything in-between, all these amazing components come together perfectly and create an unforgettably charming experience that is, above all else, simply a blast to play.

Editor’s Note: This article was originally published on January 24, 2016.