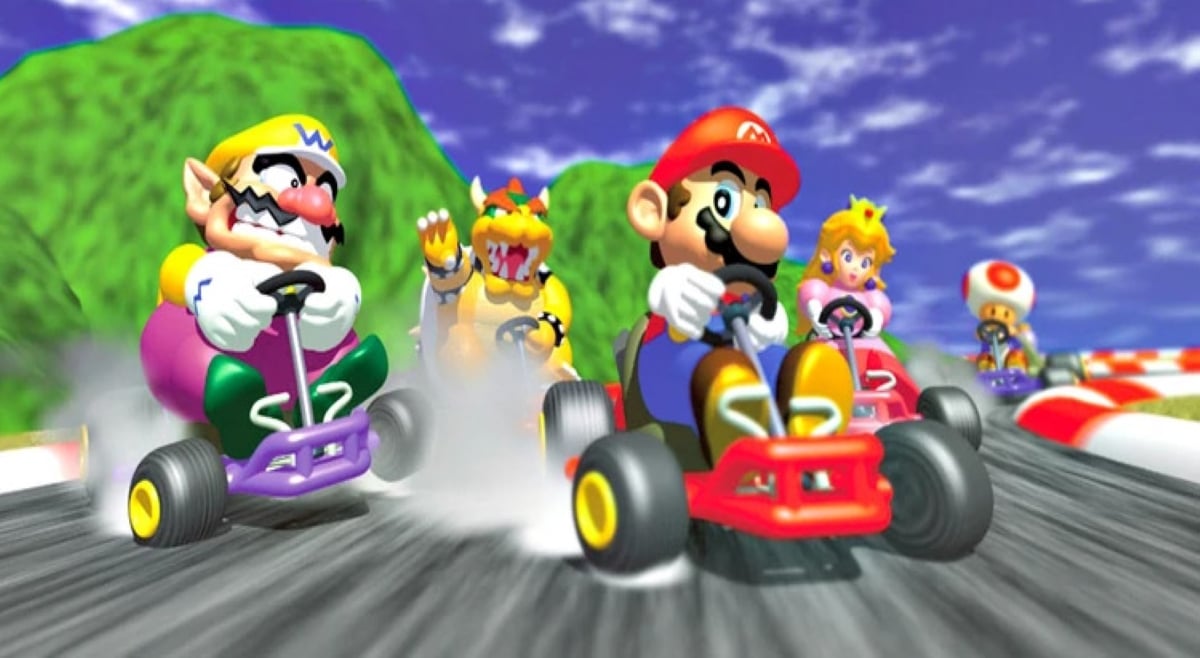 When you think of Nintendo 64, games likes GoldenEye 007 and The Legend of Zelda: Ocarina of Time might spring to mind, not to mention Perfect Dark and, almost certainly, Mario Kart 64. Being a natural step up from Super Mario Kart, it was released in 1996 after an extended pit stop of four years. Whilst having a few select haters, it was for many their childhood favorite Mario Kart game, which might not be saying much given that the next console release didn’t come out till 2003. Still, despite aging a little less well than nostalgia likes to think, Mario Kart 64‘s classic status is not undeserved. Just about.

Notoriously, GameSpot did feel disappointed enough to award Mario Kart 64 a 6.5/10. Ouch! And although that somewhat damning review may be way off the mark generally, it does get one thing right when it states that, “[E]ven with all its bells and whistles, Mario Kart 64 is very likely to disappoint you after about a week.” That’s because the replayability value in the single player is, like many racing games, rather limited. Unless you have a few friends or slave demons who you can call around every now and then for a good ole’ grand prix, playing by yourself against the unfeeling AI is going to get boring pretty quick. There are time trials and such like for those so inclined, but honestly, who bothers with those?

More to the point, there’s a fairly limited character roster with just eight racers to choose from and none to unlock (the less-acclaimed Diddy Kong Racing had ten). That figure is especially low when compared to the likes of Mario Kart 8 which offers players the choice of a staggering thirty-six, even if some of those are Metal Mario and Baby Rosalina.

However, in the event that you do like going around the same tracks over and over then that’s perfectly fine, because the ones on offer in Mario Kart 64 are pretty darn good, with a healthy array of interesting environments to race through. This facet is definitely one of the “bells and whistles” mentioned in the GameSpot review, and even that cannot help but admit that the game has some. Dodging traffic on Toad’s Turnpike and pelting down the red-carpeted hallways of Bowser’s Castle never gets old, or how about navigating the fog-shrouded twists and turns of Choco Mountain? It’s all very impressive, even if the recovery time after falling off a track is under-generous, to say the least, meaning you’re now in sixth place after having been in second. (Bottom line: don’t fall off.) Of course, no Mario Kart title is complete without the obligatory Rainbow Road, which might be just a tad underwhelming here, being pretty much a straight run with no quirks or inventiveness. One track to visit for wintertime though is the picturesque Sherbet Land, full of snow, penguins and ice caves as it is.

Just like the tracks, Mario Kart 64‘s gameplay holds up rather well too. It is a kart racer, after all, and they’re rarely not enjoyable, especially if it’s a Mario Kart kart racer (tired of hearing ‘kart’ yet?). The power-ups are severely up-scaled from its predecessor, featuring stackable weapons and drops for the first time. Why have one banana when you can have three? That being said, Mario Kart 64 is also the entry that would introduce the dreaded Blue Shell – the ‘cheat’ weapon sometimes awarded to poorly-performing racers which launches forward and temporarily incapacitate the guy or gal in first place. Like any catch-up mechanism, it can be either a good or a bad thing. Probably a bad thing if, as is likely to be the case, you’re miles ahead of all the CPU racers or your badly-skilled friends. Gee, thanks Mario Kart 64 …

One thing that hasn’t aged so well is the polygonal graphics. The danger about a game that prides itself upon its technology on its release is that that technology will soon become outdated, and boy does it show here. In fact, there’s games from around the same era and even slightly before which actually look a bit better, Crash Bandicoot and Tomb Raider among them. Mario Kart 64 may have made the jump to 3D, but there’s still something awfully two-dimensional about the pre-rendered sprites and iffy character models, a shortcoming that becomes especially visible when turning.

It’s not major enough to adversely affect the kart racing, which remains fun as hell. Graphics in general shouldn’t be that important in a series heavy on quirks and playfulness. It does however mean that more recent titles like Mario Kart 8 (going to be mentioning that game a lot, aren’t we?) hold sway over Mario Kart 64. Not only does it have the same great kart racing, but it boasts great graphics too (until circa 2040, anyway), which makes it just a little bit better to play in the present day.

Mario Kart 64 was great for its time, but it would have Crash Team Racing to contend with three years later. Some (most, not surprisingly, PlayStation fans) claim that to be the greatest kart racer of all time, and that’s not even talking about the remake. It introduces a single-player plot mechanic to help drive the racing on screen, something which the Mario Kart series always lacked. Mario Kart 64 may or may not win that particular race, but one thing’s for sure: it’s assuredly not the greatest Mario Kart game. An honor that almost certainly goes to Mario Kart 8 Deluxe.

Having said that, to be a slightly lesser game in an outstanding franchise is no shame whatsoever. Quite the opposite, in fact. Mario Kart 64 is right up there in the front pack of Mario Kart games, finishing maybe in third or fourth place overall, and well worth taking for a spin.