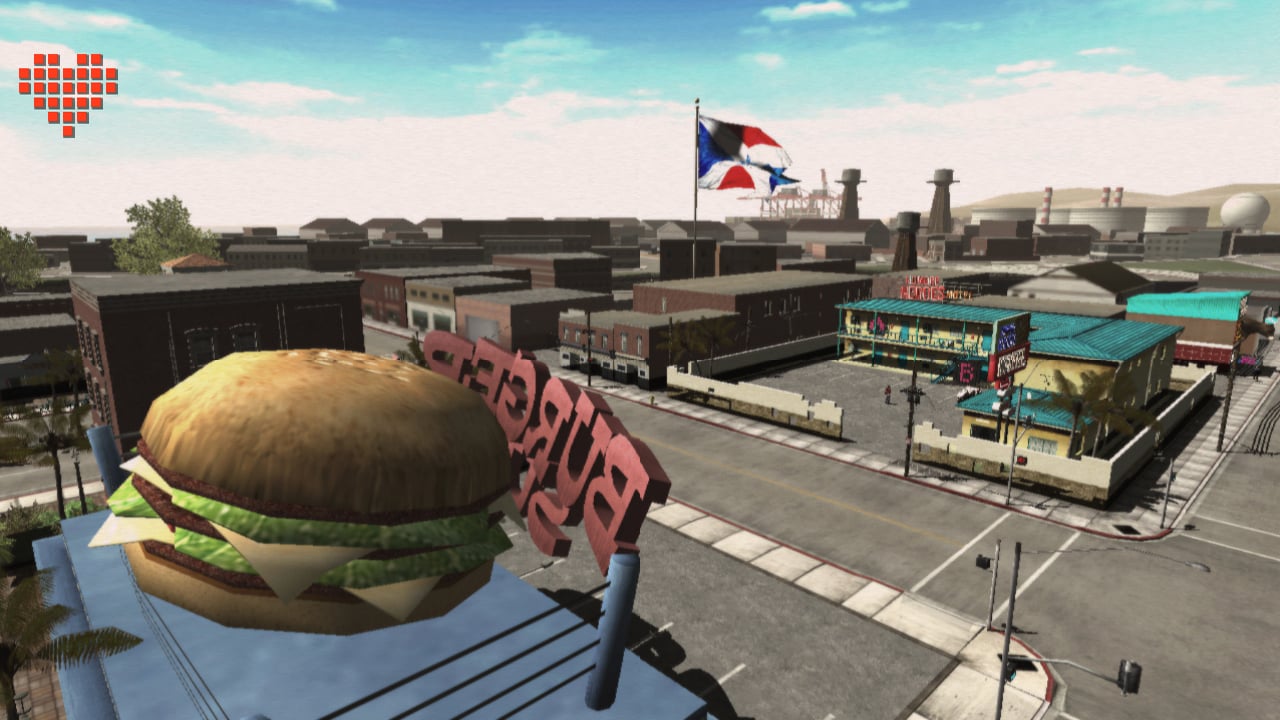 As fondly remembered as the original No More Heroes is, its open-world elements have always attracted significant controversy. Many have criticized the open world for its emptiness, as well as the need to grind for money between ranking matches. It is true that exploring the city of Santa Destroy is much less mechanically or viscerally engaging than the over-the-top, gory action gameplay the series is known for. But there is much more to No More Heroes than just the extravagant violence; it has a story to tell, and that story simply would not be complete without the open-world. It is easy to say that the developers should have filled that world with more interesting activities, but even its supposed flaws serve a purpose in the narrative, and that narrative would be weaker without them.

One of the open world’s more valuable traits also happens to be one of the most obvious: it serves as breathing room between the ranking fights. Compared to the thrill and excitement of the main levels, the open world is noticeably more low-key and relaxed. This ends up creating a natural pacing that repeats throughout the game. First, the player roams around the open while earning money before they gain access to the ranking fight. Tension then builds as the player makes their way to the boss, slicing up any bad guys that stand in the way. This tension reaches its climax when the player fights the boss, after which it rapidly deescalates when the player returns to the open world. This gradual crescendo allows time for the player to build excitement over the upcoming boss encounter, which always pays off in spades, as the bosses are full of personality, mechanical intricacies, and thematic depth. They usually reveal some sort of narrative beat, whether it be a plot twist or a revelation about main character Travis Touchdown’s personality. Having the player go back to the open-world soon afterward gives them time and space to think about the events that transpired and what they may mean. This makes the bosses feel that much more impactful, and the experience would not have the same ebb and flow if the player were simply sent right to the next main stage.

Another way the open-world contributes to No More Heroes’ narrative is how it reflects Travis’s character. Titles like Grand Theft Auto are known for their sprawling worlds filled to the brim with activities to partake in, and there is an inherent glamour in giving a player character the freedom to do whatever they want. But Travis is not a particularly glamorous person; he’s crass, self-aggrandizing, and out of his depth. He began his murderous ascent up the United Assassins Association rankings for little more than the desire to live out his otaku fantasies to their logical extreme. Outside of the extravagant fights he gets into, Travis is a regular guy, and he has to work and live through the mundanities of life just like everyone else does.

The city of Santa Destroy itself is similarly unglamorous. The waters by the beach are contaminated with industrial waste, the job market is unforgiving, and the town as a whole is described as a generally crummy place that few want to be associated with. It’s fitting, then, that Santa Destroy in gameplay is barren and devoid of activity. There is little to do when exploring outside of finding random collectibles and caches of money, and outside of the assassination missions and the high jump minigame, the side jobs the player partakes in are incredibly menial. Activities like mowing the lawn, collecting trash, and cleaning graffiti are barely gussied up, as they are only made more interesting through goofy animations and a catchy soundtrack. These side jobs and the general sparseness of Santa Destroy strip the open world of all its allure and open a window into what Travis’s life, and by extension the lives of many other people, are really like. Travis may be able to live out his ultimate fantasy through murder, but he cannot escape the fundamental realities of being a working-class American, especially since, judging by his opening monologue, he isn’t particularly responsible with his income.

What justifies the open-world further is one of No More Heroes’ major twists. Right after paying the entry fee for the final ranking fight, Travis finds out through a phone call that the United Assassins Association was an elaborate ruse. This means that all of the side jobs, assassination gigs, and money grinding the player does throughout the entire game to enter each ranking fight was enforced mainly to line the pockets of the mysterious agent Sylvia Christel. This twist would not have hit nearly as hard if the open world and entry fees didn’t exist. By having the player spend all this time aimlessly roaming around Santa Destroy and grinding for money, the player feels just as scammed as Travis does during this moment. Because of this twist, it is difficult to see the entry fees and money grinding as merely padding; it serves to make the revelation feel much more genuine, and it gives the player pause to think about whether Travis’s bloodthirsty ambitions were worth it.

It is understandable that many who played No More Heroes came away from it disliking the open world. The content-rich and explorative wonder of open worlds can be incredibly arresting when done well, but No More Heroes’ cynical take on the concept seems to fly in the face of that. But no matter how off-putting it may have been for those people, Santa Destroy ultimately adds so much to the experience. It breaks conventions and deconstructs the open-world concept in service of a larger point, and that is something not many games have managed to do. Santa Destroy may not be “fun” to explore in the traditional sense, but it is a significant reason why No More Heroes is worth thinking about over a decade after its release.