The moniker of Goichi Suda, a video game director known for his idiosyncratic game design, the name “Suda51” brings many things to mind. His experiences have often been polarizing with audiences. For some, he’s a gaming visionary, and for others, his games are much too obtuse to be enjoyed. In 1999, Suda51 published a game known as The Silver Case, a visual novel/adventure hybrid for the original PlayStation. This was also the first game to be released by Suda’s game company, Grasshopper Manufacture. It was never released outside of Japan until now, as Active Gaming Media localized the game for American audiences with this HD remaster. It’s been seventeen years since the game’s original release, and Suda’s seminal Grasshopper title can finally be played by English-speaking audiences, including both fans of his subsequent work and newcomers to his surreal worlds.

The Silver Case is, at its core, a visual novel, but with many liberties taken and tweaks made to create something entirely its own. The game’s main drive is to tell a story, so gameplay takes a backseat to dialogue and cutscenes. Most time with the game will be spent on reading dialogue between various characters as the complex murder mystery plot unfolds. The exact way that this story is told, however, is unique. The location of the text on the screen changes frequently, and visuals are shown in windows that often show up and disappear. The design of the screen is rather haphazard, but works in the game’s favor, as it keeps the unsettling storytelling fluid. The entire game plays like a sort of interactive comic book, with scenic images, character portraits, and text boxes popping up in unconventional ways throughout. This is the main vehicle for delivering the story, and the game is very text-heavy, so it’s good that the text is well-written and engaging. Active Gaming Media did an excellent job translating the game for English-speaking audiences. 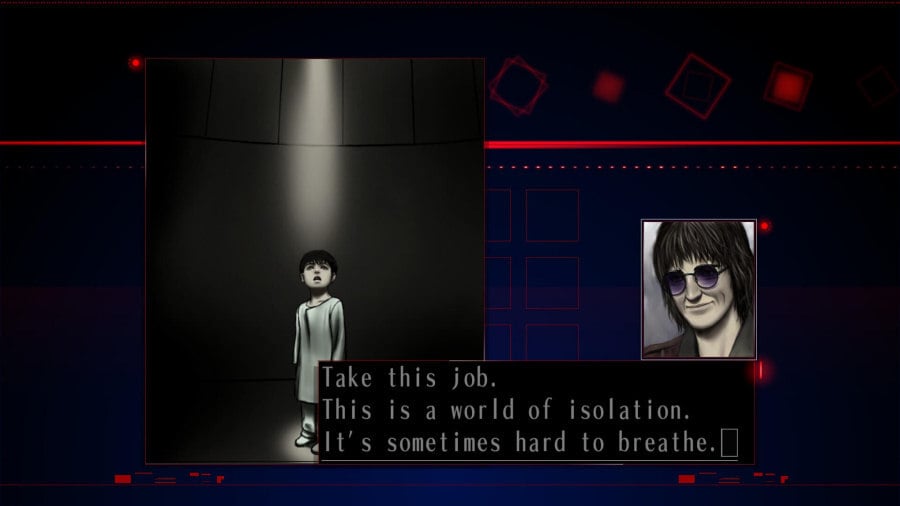 The Silver Case’s plot is primarily a mystery. It deals with a team of detectives from a city called “24 Wards”, and a mysterious killer known as Kamui, who was previously thought to be dead. The plot is delivered through two separate but intertwining threads, titled “Transmitter” and “Placebo.” The Transmitter plotline is what could be considered the main story of the game, and Placebo is more of a side story. Both of these can be accessed at any time, and completed in any order that the player pleases.

In Transmitter, the player follows the exploits of a detective team in search of Kamui, and details their efforts to uncover just who he is, where he came from, and what he plans to do next. The player also frequently controls a detective that they name themselves, and participate in the investigation alongside the other detectives, making the player’s own character a crucial part of the ensuing events. This plotline was written by Suda51 himself, and is the more complex of the two threads by a considerable margin. It takes many different twists and turns, and moves at a rather fast rate. In Placebo, the player plays as an ex-detective named Tokio Morishima, and the story follows his efforts to uncover the Kamui case on his own. This plotline was written by Masahi Ooka, and is relatively straightforward compared to its counterpart, serving as a singular character study on Morishima. His story, while not as fantastical or twisting as Transmitter, is still intriguing as a mystery, and can be emotionally engaging as well. As a whole, Transmitter truly is The Silver Case at its core: Suda51’s mind-bending, surreal murder mystery story, while Placebo is a slower-paced, but still well-written, character-driven mystery that effectively ties into the main story. Both of these require attention on the player’s part, as information is constantly being given. The plotline is mature, and touches on themes often avoided by video games, such as suicide and exploitation. This was especially true for the original 1999 release. As a whole, the story of The Silver Case is one that is difficult to briefly define. It is dark, analytical, a bit confusing, occasionally ridiculous, and always engaging.

While most of the story is experienced through reading, there are gameplay aspects that often come into play as well. Occasionally, the player will be placed in a first-person perspective, and can move freely within a 3D environment. There is a square located in the bottom-right corner that provides four options for the player: move, inventory, save, and contact. The player can control their character by first selecting the “move” option from the square, and move using either the arrows provided onscreen or by using the WASD keys. The “save” button brings up a menu screen where one can save and tweak game options, and the “inventory” button is used only once or twice throughout the entire experience. Finally, “contact” is used to talk to characters and interact with objects. Through this first-person perspective, the player will solve puzzles and talk to characters in various environments. There are infrequent puzzles to be solved, the majority of which require very little thinking on the player’s part. These gameplay sections often feel forced or unnecessary. In particular, the moving feels robotic and clunky. The most dated aspect of The Silver Case is its gameplay segments. Nonetheless, the presentation of these is unique, and they can be tolerable in spite of obvious flaws, especially since they make up a disproportionately small percentage of the game’s content. 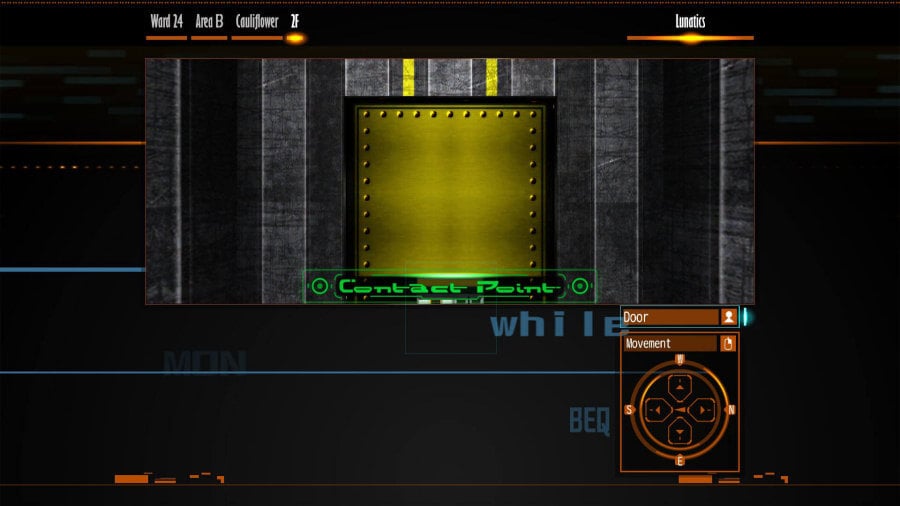 The visuals, particularly the drawings of each environment, are well done and have a realistic sense of style. The 3D environments are relatively blasé, not being offensively bad but having little worth noting. These visuals didn’t seem to get much of a remaster, as they still look on par with PS1-era graphics. However, the utilization of mixed media gives the game a lot of visual appeal. Anime cutscenes, 3D images, and even FMV with real actors are used throughout the experience as different means of storytelling. The number of visual styles used is staggering. Each of these serve their intended purposes, and keep the game interesting throughout.

Seeing as this is technically an HD Remaster of the original Silver Case, various tweaks have been made, and a few cosmetic changes have been applied, but the majority of the game itself has been left unchanged. The menu screens look fantastic, and are stylistically in-tune with the rest of the game. The in-game narrative portions have some added background visuals to make the novel sequences more visually interesting, and this upgrade is also well done. However, this is where most of the new features stop. The “remixed” music doesn’t seem to have been updated much, if at all. There is an option to switch between the original settings and the HD remaster settings at any time, but overall, the remaster’s changes from the original are fairly minimal. The main benefit of this rerelease is obviously the English localization, not new features.

The soundtrack to The Silver Case is enjoyable, if somewhat unremarkable. Comprised mostly of synthesizer and piano-heavy music, it does a great job of establishing a strong atmosphere, but no tracks truly stand out as particularly memorable. A strong atmosphere is important to such a text-heavy game, and the catchy tracks of The Silver Case make a fine backdrop to the game’s narrative, if little else.

There are a few problems that keep this game from reaching greatness. For one, playing with a mouse wheel is a must, because there are certain instances where it’s required for the player to look up or down. The game states that the PgUp or PgDn keys can be used for this action, but they did not function as they were supposed to on the system used for this review. But the biggest gameplay flaw would certainly be one of the game’s final areas, which (without spoiling anything) is a giant puzzle that involves walking around 10 identical towers. The experience quickly becomes tedious and incredibly repetitive. It felt thoroughly unnecessary, and served no other purpose other than to add arbitrary playtime. 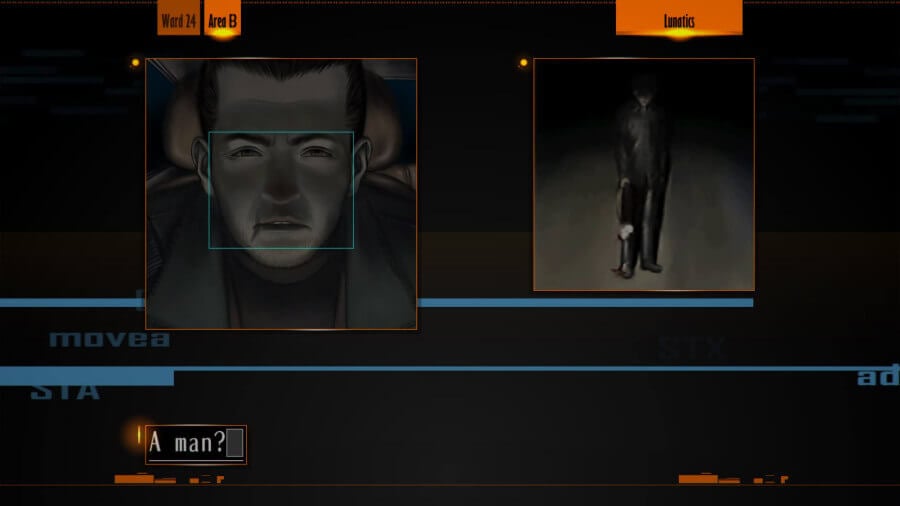 It is clear that Suda51 has always been in relentless pursuit of trying something new with the gaming medium. When one plays a Suda51 game, they’re in for a unique experience that hasn’t been replicated anywhere else, and The Silver Case is no exception. Whether this is a good thing is ultimately up to the individual. The heavy themes and distinct visual style could certainly be considered ahead of their time for a game released in 1999, and these features are still are just as unique in the modern day. However, the obtuse control interface, extensive amounts of reading, and deeply cerebral plot will surely turn away many. The game can easily be recommended to three audiences: fans of Suda51, those who love games as experimental art, or those who are looking for a wild, surreal story that is tonally all over the place. If you fall into any of those three categories, you will surely find much to enjoy within The Silver Case. However, if you’re looking for a more traditional game with a coherent storyline, look elsewhere. This is a game that is difficult to pin down. The Silver Case is its own singular entity that provides a unique experience that anyone looking for a new and challenging format of storytelling should definitely look into.