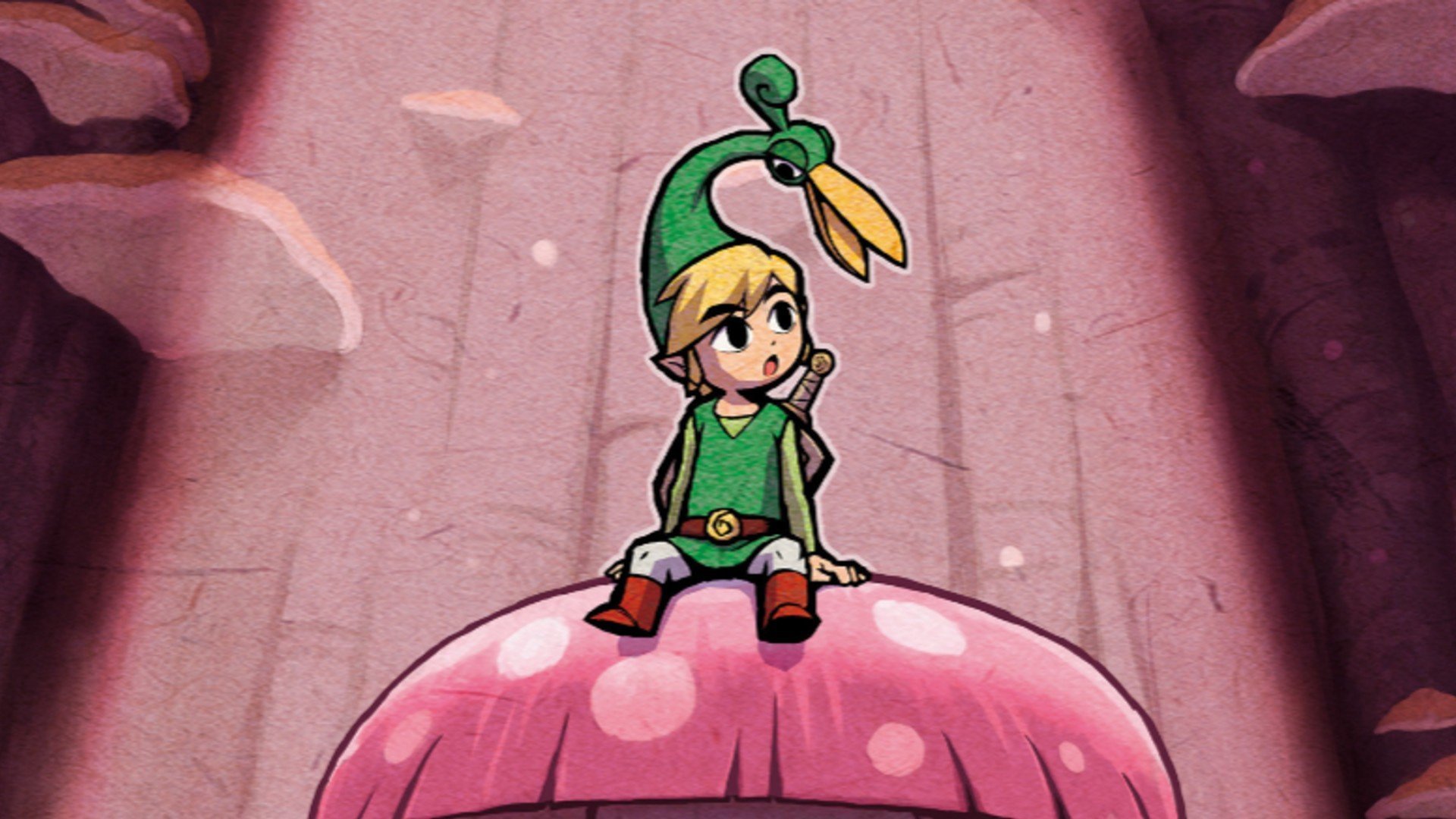 The Legend of Zelda originated the franchise; The Adventure of Link set a precedent for experimentation; A Link to the Past solidified a formula; Link’s Awakening proved the series could say something meaningful with its stories; the Oracle duology interlocked two almost antithetical games together into one sprawling epic; and both Four Swords titles served to give the franchise a multiplayer component. The Minish Cap, in comparison to its predecessors, brings virtually nothing new to the table. Every single one of TMC’s core features is in part influenced by previous entries in the series. Yet while calling The Minish Cap unoriginal wouldn’t be a stretch, the game’s lack of innovation is by no means a signifier for a lack of quality.

Rather than adding onto the Zelda formula, The Minish Cap simply takes what the series has already established in order to bring 2D Zelda to its natural next step. TMC’s Hyrule feels like a mix of Majora’s Mask’s Termina and Link’s Awakening’s Koholint Island, featuring distinctly unique NPCs with clear cut personalities; dungeons are coherently themed in the vein of Ocarina of Time; and the swordplay takes a page from The Wind Waker, considerably increasing just what Link is capable of doing with his base sword. On top of that, the story, while rather small in scope, acts as a stealth prequel to the Four Swords games, offering origins for both Vaati and the titular Four Sword.

Even shrinking to interact with the world at large, The Minish Cap’s main gimmick, is effectively A Link to the Past’s dual world mechanic, but retooled in a way to allow added connectivity within the overworld. The Minish Cap is not a Zelda looking to set new trends. Rather, it aims to refine what is already present. Every step Capcom takes with the title is one in the right direction. The franchise is certainly better off for frequently reinventing itself, but not every Legend of Zelda needs to, or should, do so. As far as the 2D Zeldas go, The Minish Cap is proof that treading old ground can do plenty of good.

Although Nintendo would go on to immediately abandon everything TMC ironed out in the next 2D Zelda, The Minish Cap still serves as a glimpse of what exactly the series is capable of in 2D. Of everything Capcom reforms, the combat is by far the most radical. Previously, Oracle of Seasons featured the most in-depth combat of the traditional 2D Zelda while The Adventure of Link was the most in-depth, period. The former expanded combat via items whereas the latter sported a radically different battle system the series would never return to.

The Minish Cap rejects both approaches by simply choosing to expand what Link can do with his base sword. Throughout the course of his adventure, Link can learn eight skills from Hyrule’s Blade Brothers. While most of said skills are previous series staples- The Spin Attack and Sword Beam for instance- the Roll Attack, Downthrust, and Rock Breaker are relatively new-ish additions for 2D Link, giving him more leeway in combat. Regardless of how original his skills are, the mere fact that Link can do more than slash and charge his sword is a massive improvement from previous 2D titles.

The inclusion of sword skills likewise allow there to be a sense of clear cut progression across Link’s adventure. Zelda games have generally always done a good job of instilling a feeling of growth into the main games either through heart pieces or giving Link new equipment, but seeing the hero actively be able to better his swordsmanship is almost all the more fulfilling. It’s not a new concept, one that The Wind Waker specifically toyed with, but it comes off more impactful in TMC than it ever did in TWW, even if the former’s swordplay isn’t as graceful as the latter’s.

2D Zelda dungeons have always done a good enough job of creating unique identities for themselves, the post A Link to the Past ones at least, but they’ve often lacked cohesive theming either with one another or the worlds they inhabit. While by no means necessary for a good Zelda game, The Minish Cap following Ocarina of Time’s example in contextualizing its dungeons more prominently, either through lore or visual cues, is a huge boon in TMC’s favor.

In general, The Minish Cap features some of the strongest 2D dungeons in the franchise. Both Fortress and Palace of Winds are labyrinthine gauntlets that require paying close attention to their surroundings while Dark Hyrule Castle stands out as one of the strongest final dungeons in the entire series rivaled only by A Link to the Past’s Ganon’s Tower. Given that every dungeon after the Cave of Flames makes use of the Four Sword’s splitting mechanic, there’s a great cohesion to how puzzles relate to one another than ever before. Lessons learned in the third dungeon can be relevant all the way to the last.

In many ways, The Minish Cap is Capcom’s Legend of Zelda swan song, taking the elements that defined Oracle of Ages and Oracle of Seasons individually in order to roll them together into one complete package. The Minish Cap is shorter than either game, but its content is in many ways more meaningful due to how polished every facet of the game is. For their final outing, Capcom opted to develop a “quintessential” 2D Zelda, so to speak, leaving a solid foundation for Nintendo to build off of.

Sadly, the next preceding 2D Zelda would be Phantom Hourglass which would drop everything The Minish Cap refined in favor of touch controls among other gimmicks. When the series returned to its traditional roots with A Link Between Worlds, the game styled itself heavily after A Link to the Past, leaving no room whatsoever for evolution The Minish Cap brought to the 2D Zelda formula. It’s genuinely a shame Nintendo hasn’t revisited what Capcom left behind with TMC as The Minish Cap is the closest a 2D Zelda has ever gotten to emulating the 3D sub-series’ general feel and aesthetic.

There’s undeniably a certain “aesthetic” the 3D Legend of Zelda games give off. They’re bigger budget products with an eye for presentation and spectacle. It’s not unusual for 2D Zeldas that aren’t A Link to the Past to be written off by fans due to just how much more fanfare Nintendo gives the 3D side of the series. Even then, however, The Minish Cap is proof that a 2D Zelda can embody the same feeling of a 3D one. It’s more of a Majora’s Mask than an Ocarina of Time, relying on side content to lengthen the adventure, but that isn’t inherently bad.

Action is more than just mashing Link’s sword button; dungeons are contextualized and feature consistent puzzle mechanics that span the whole game; and the the world of Hyrule feels more alive than ever, with each NPC adding to the general atmosphere of the world. Even the story manages to say something meaningful by ending on an origin for Link’s cap that’s both emotional and endearingly humble. In recognizing that The Minish Cap didn’t need to be some grand tale, Capcom created something all the more poignant.

The Minish Cap is the closest a 2D Zelda has ever come to reaching the heights set by A Link to the Past in that it is the only game that cares about evolving the formula. The fact Nintendo didn’t immediately see The Minish Cap as the next logical step for the 2D side of the series is a genuine shame, and that they haven’t gone back to it since is a massively missed opportunity, leaving all of Capcom’s great work to rot.

In a bizarre twist of fate, The Minish Cap, which was arguably the most unoriginal Zelda game of its time, has become one of the most original. In an age where Phantom Hourglass, Spirit Tracks, A Link Between Worlds, and Tri-Force Heroes define modern 2D Zelda, The Minish Cap stands out as the truest evolution of The Legend of Zelda in its purest, two dimensional form. The Minish Cap is a greatest hits compilation of the franchise, blending everything together into one cohesive package. It’s just a shame it’s been obscured by the passage of time.