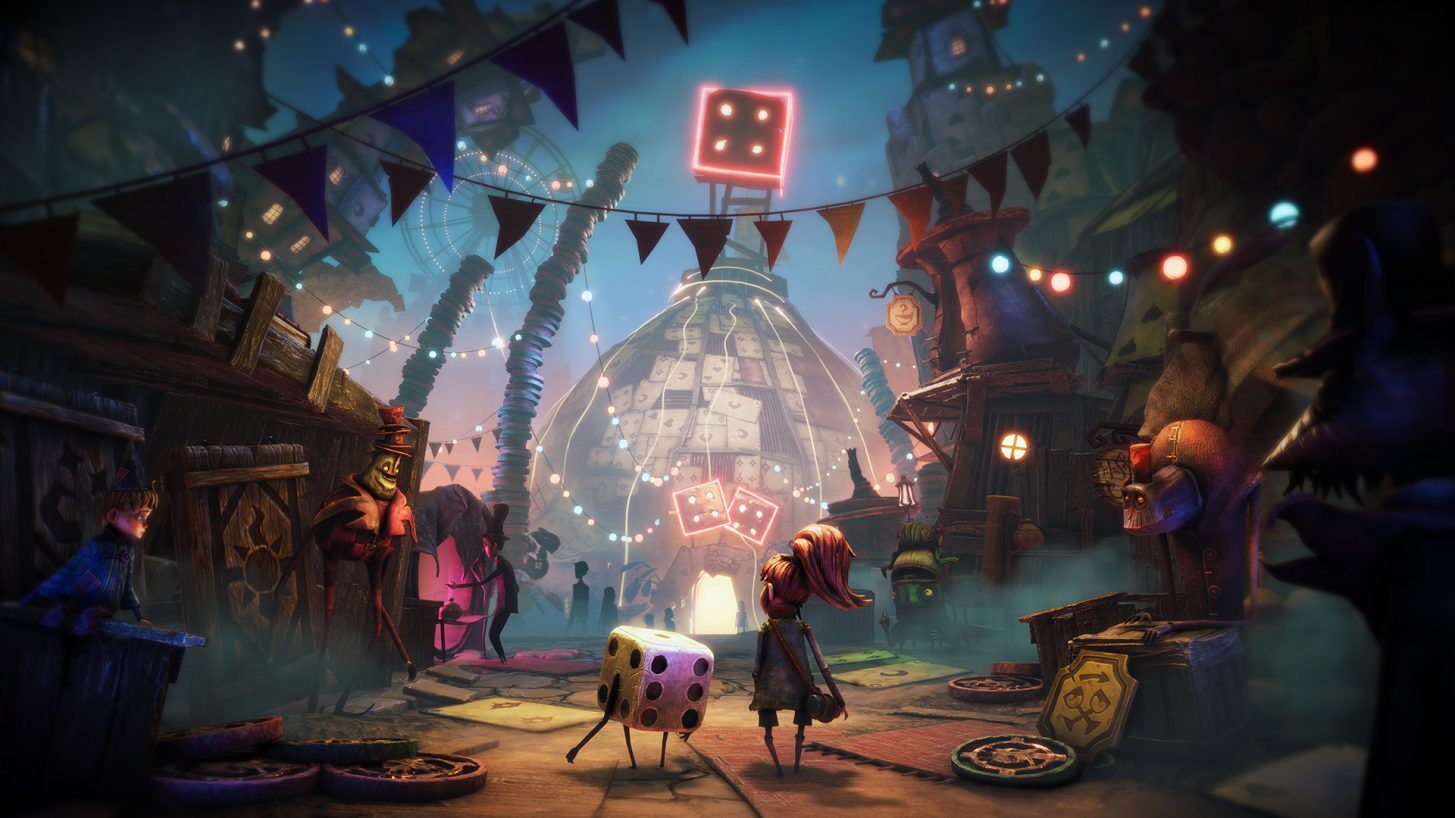 Lost in Random seems generic at first glance, boldly wearing its influences on its skeletal sleeves. Not only does this new game from publisher EA Originals and developer Zoink Games take place in a themed world, but it is also inhabited by doll-like beings that are depicted in a style akin to stop-motion animation. Look at any preview or review of Lost In Random and the works of Henry Selick and Laika are sure to be brought up (just as they are here). But the aesthetic of Lost in Random is no jealous copy. It’s a confident homage. In story and world, Lost in Random rivals its inspirations.

Lost in Random follows a little girl named Even who lives in the world of Random where the roll of a single die, the die of the queen, governs society. The die decides every rule of state, much like Two-Face’s coin, and it is in this that Lost in Random initiates the core conflict. When a child turns twelve, the die is rolled to determine where the child will live with each side of the die representing one of the six districts that make up the kingdom. Even lives in the poorest district, Onetown, and when her sister, Odd, turns 12, she is sent to live in the wealthiest district, Sixtopia. And so begins a journey of rescue, with Even setting off to save her sister from a luxurious, but possibly cruel existence. It’s a fascinating tale that only deepens the more you play.

In many ways, Lost in Random is reminiscent of Inside Out, doing for randomness what that movie does for sadness. The game sees chaos not simply as a means for destruction, but as an impetus for the freedom of expression that is the backbone of love and connection. Lost Random, in its playful wisdom, feels like the creation of an astute, wistful child who sees reality’s harshness and playfulness in equal measure. It’s enchanting.

This sense of wonderment and creativity carries over into Lost in Random’s fantastic gameplay, combining real-time action with the strategy of a deck-building card game. Even finds the power to pulverize the Queen’s mechanical horde thanks to magical cards whose power is brought to life by a sentient die named Dicey, who Even meets at the beginning of her journey. Over the course of the game, Even collects cards of various types, ranging from attack cards that provide weapons to hazard guards that create deadly traps. To active the cards, Even needs to roll Dicey whose magical powers then activate the cards. But there are some cavities.

True to its card-battling heritage, Lost in Random puts limits on Even and the player. Even can only take 15 cards into a battle and she can only play the cards in her hand, randomly determined when the dice rolls. Furthermore, each card requires a certain amount of power to be activated and the power released, called card points, is dependent on the roll of the die. Adding to the complexity is how the power is obtained, since Dicey must be powered up before each roll.

Every enemy produces energy crystals on their bodies, which Even can shoot off and collect to energize Dicey. Doing this can feel occasionally tedious, chopping combat up into fits and start, but it quickly becomes another motivation to properly plan since it’s possible to decimate enemies in quick succession with proper preparation. All that is to say, deck-building matters. From beginning to end, it is important to properly assess the environment and the enemies you’ve fought. You have to actively anticipate encounters and plan ahead. Add to this strategizing, the devilish element of chance inherent in every dice roll, and you have a combat system that is thrilling, unique, and wonderfully suited to Lost in Random’s world and themes.

Of course, not everything is combat, and Lost in Random generally succeeds outside this area, despite its bland level design. When not engaged in robot genocide, players explore one of the six towns, engage in side quests, and talk to the citizenry. The towns’ layout bores, never feeling organic or adequately alive, but the dialogue and atmosphere are phenomenal, picking up the slack.

From the carnival-like town of Fourberg to the dual-sided Two Town, every interaction feels true to the eccentric districts. For instance, in Two Town, where everyone has a split personality, there is a side-quest involving a mad scientist who wishes to rid himself of his other personality using a potion. Even is enlisted by both personalities to get the ingredients and must decide to whom to give them. The end result is surprisingly poignant and a thoughtful companion to the main story, complicating how you understand what transpires.

Unfortunately, despite all the wonder, Lost in Random falters in a few areas. Along with the aforementioned level design, the game’s combat starts to become stale with little variation in the way of cards and enemies during the final acts. Together, these issues make the game feel occasionally monotonous to play and dampen the experience.

Aside from the gameplay and design annoyances, Lost in Random also suffers from technical issues, including a poor frame rate during hectic fights, and drab graphics, especially on the Nintendo Switch. The game’s macabre atmosphere and toy-like character design are certainly excellent, but there are many times when textures, characters, and environments look muddy, making the game feel like a lesser imitation of its inspirations from a visual standpoint. Frequent loading and awkward transitions in and out of cutscenes compound these problems. Lost in Random tells a marvelous tale and is superbly acted, so it’s a shame that the graphics and tech fall so short of the incredible world.

Despite an unfulfilled graphical vision, Lost in Random is still compelling entertainment and a true piece of art. There’s something special about a video game that is a genuine labor of love where everything in it, even the unpolished bits, exudes passion. Lost in Random is one such game. It’s by no means flawless, oftentimes extending its vision far beyond its technical capabilities, but it is still wonderful, brimming with creativity, insight, and joy.