It comes as no surprise to hear the announcement that Nintendo has scrapped Project Giant Robot. The Wii U game that had been ostensibly in development has found its fate sealed alongside its console.

Nintendo confirmed the news with GameSpot, saying Project Giant Robot “will no longer be released.” The company also told Polygon that it made the decision “after considering [its] overall product and development strategy.’

The game was shown only once at E3 2014, alongside two games that eventually became Star Fox Zero and Star Fox Guard. Designed by Shigeru Miyamoto, the game was supposed to leverage the capabilities of the Wii U’s GamePad. The gameplay consisted of giant robots battling using a combination of gyro controls and the buttons on the controller. The screen on the GamePad gave you a bot’s-eye view of the world, whilst a third-person view of the game’s environment could be seen on the television. A quirky concept giving an asymmetrical first/third- person experience.

Project Giant Robot was initially set for release in the first half of 2015 but had been quietly delayed, with Nintendo changing the release calendar to TBD. Nothing changed, and with the Switch’s release a month away, the cancellation is of little surprise. 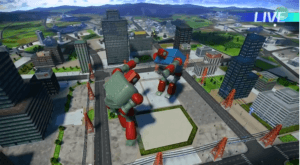 Nintendo had recently confirmed that there would be “no new development” for the Wii U after the release of The Legend of Zelda: The Breath of the Wild.  However, it was thought Nintendo’s existing projects would still launch on the console. With the termination of Project Giant Robot, the door might be closed for any other existing projects on the Wii U.

An original approach to utilizing the mechanics of the Wii U, but with the Wii U consigned to the dustbin, it would seem pointless releasing Project Giant Robot. The gimmick of the first/third-person hybrid experience would be difficult to emulate on the Nintendo Switch without a tweak in its design, allowing handheld and TV mode to be played at the same time.

A creative idea that was only shown once, not many will remember Project Giant Robot from E3 2014. It certainly represents the curse of the Wii U, an innovative idea that didn’t quite excite the public. Nonetheless, it would be a shame to not see something similar appear on the Nintendo Switch in the future. Giant robots very rarely fail to amuse; a jumpstart in the future shouldn’t be abnegated so quickly.