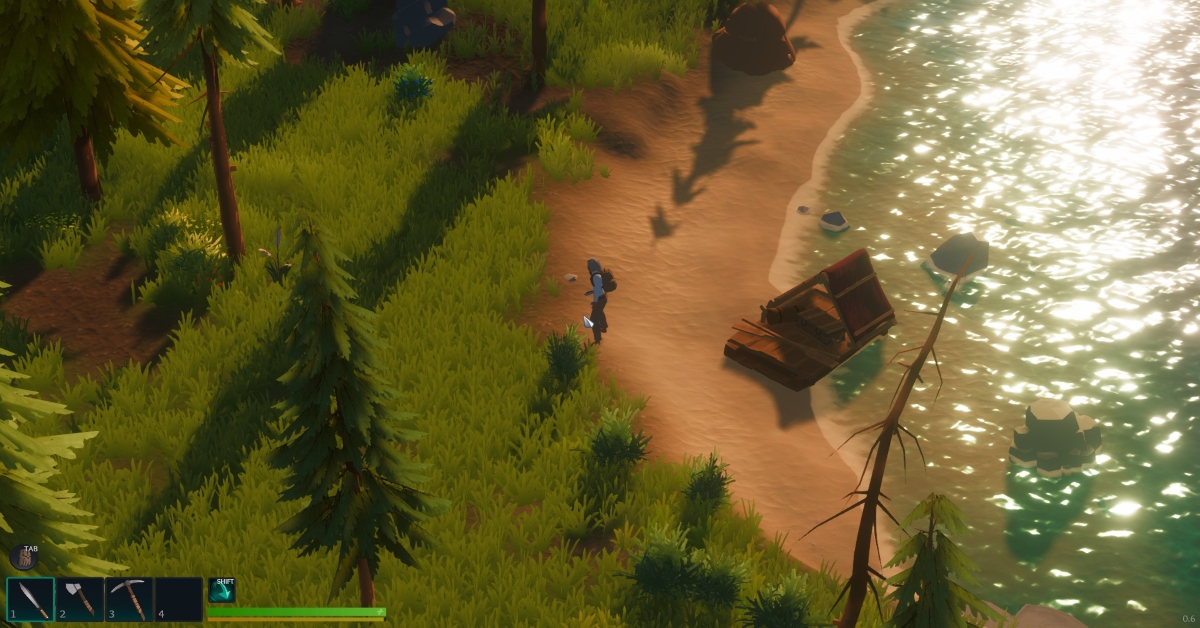 Some titles driven by an excellent gameplay idea or a good plot can be error-ridden in the little details, and some technically brilliant and shiny blockbusters can have a rubbish idea and an uninspiring central premise. In our case, the idea of Len’s Island is good, and the execution acceptable, probably even a little above acceptable. It’s a pacy dungeon crawler with a twist, as Len’s Island throws in some role-playing and building simulator elements into the core gameplay, culminating in an innovative crossover experience that’s about as appealing as the tropical scenery all around. Best of all, it’s in Early Access, so there’s even more to come.

The tiny team of developers went through a lot to get this out the works, driven as they were by that low-budget passion which fuels a lot of indie games – a process that also included an ambulance and a heart defibrillator, more of which can be read about here. It’s an admirable effort for such a small team (one person originally, later three), and although the trials and tribulations involved in making a product shouldn’t really affect the final judgment, sometimes it’s impossible not to be drawn to what goes on behind the scenes.

The inspiration came with principal developer Julian Ball who grew tired of playing straightforward dungeon crawlers and felt the genre needed some creative spicing up. As a result, Len’s Island sets out to be an innovative cross-genre experience, and in that it accomplishes its goal, if not spectacularly then certainly competently. Yes, it’s a dungeon crawler, but it accommodates different playing styles. Money can be earned either through loot and combat or by constant farming and the chopping down of trees.

‘Island’ might actually be slightly misleading. It’s really an archipelago of islands, the location in relation to the real world not being entirely clear, but given that the developers are based out of Australia, that seems as good a guess as any. The best part of Len’s Island comes arguably in the first few moments. Like Columbus, the player finds themselves on a sprawling beach with no clear indication on where to start, the promise of adventure looming in every direction. It’s a good feeling.

There’s no tutorial, further reinforcing the feeling of being a stranger in a strange land, and the player is left to their own devices right from the get-go: those devices consisting of a knife, an axe, and a pickaxe. Beautiful though it may be, it’s an island paradise only on the surface, tainted as it is by a curse emanating from down below. There are relatively few enemies above ground because, true to any dungeon crawler worth the name, they’re all packed into the deep and vast underground caverns where most of the action takes place. More on that shortly.

Most time above ground is spent exploring and gathering resources (wood, stone, herbs, etc.), using them for crafting items and weapons, not to mention constructing and upgrading a home. Not only can a new house be built wherever and whenever, but it can also be customized to your heart’s content in a true grid-like fashion. Want a cozy little shack with no windows? Not a problem. Or how about a mansion with a deck jutting out over the water? That can be easily arranged.

As cozy as it is, the house-building in Len’s Island seems mostly a cosmetic feature. There’s nothing forcing the player to retreat inside late at night and bolt the doors. A nice idea might have been to make the overworld a little more threatening in the dark, and although that may have been following too much in the footsteps of Minecraft, it does seem like a missed opportunity.

A bed is required for sleep, which isn’t necessary for anything beyond passing the time. Sleeping does save the game but, confusingly, there’s an additional option right beside it which also saves, but without sleeping. Cutting down the two options into one might be better if only to make sleep anywhere near as important as it is in real life. There’s also no sleep cutscene or animation, meaning the lighting and the color of the sky changes instantaneously, which feels rather weird.

For all its homey charm, Len’s Island is no farming or building simulator. At least not primarily. Though it’s not immediately explained, there is a reason the island – or, at least, the subterranean part of the island – is cursed. In other words, there’s something of a story to be uncovered here, and that requires progressing through the elaborate underground cave network. Apart from several giant crabs and some packs of bees released from the occasional felled tree, the majority of the enemies are to be found there, and most of what the player does in the overworld is done for the purposes of advancing in the one beneath it.

To tackle the more difficult of these enemies, items must be purchased or leveled up, and that requires farming and collecting resources above the surface, though some of the finer minerals and loot can be found underground. Above ground, new territories can be reached by repairing broken bridges using resources, though quite why the bridges should be broken when there’s a nearby town filled with tradesmen and tradeswomen is anyone’s guess.

The town, very accurately named Bridgewater, is filled with shops, wares, and all sorts of tradespeople, among them a fruit seller, a logger, a blacksmith, and even a pirate, catering to every monster-fighting need. Although functional, the NPC dialogue is text-based and unimaginatively one-dimensional (mostly no more than ‘goodbye’ or ‘see you next time’), their sole purpose being to sell items to the player. They also don’t appear to sleep and simply stand by their stalls around the clock. This means that although Bridgewater looks like a real town, it doesn’t feel like one. That being said, it is important to remind ourselves that this is a game in Early Access, and the developers do promise more content in the form of quests and dialogue interactions.

Len’s Island‘s graphics style is vibrant and colorful, and the lighting impressive: the sparkle of the ocean, the glint of the waterfall against the firelight in the caves, and the shadows of the trees as the sun goes down. The daytime nature and bird sounds are pleasant, as are the more eerie hooting and the creaking of trees at night. The main island is a well-built location, if a little small; its circumference can be walked in a matter of minutes.

The gameplay itself is smooth for the most part, though a few things did crop up over the course of a few hours playing. For some reason, the game runs poorly in certain parts of Bridgewater. Also, for one brief moment on the main island’s eastern beach, my character started swimming into a spot that was clearly sand but soon snapped out of it. And in the hit system, there’s a slight delay between when the player releases the attack button and the moment the character actually stops attacking. With the possible exception of the first, these are minor, minor things that shouldn’t however detract from an otherwise well-made experience. There are bigger, better-funded projects with worse issues.

We’ve spoken a little about bridges, and being something of a hybrid, Len’s Island’s greatest achievement is in molding together various already-existing styles into one single package. There’s nothing we haven’t seen before. The basic dungeon-crawling elements are done better in Diablo, and the design elements in The Sims series, but these are blended together in such a way that it’s refreshing to see, offering something for everyone. This, after all, is what the developers were going for, and in that they’ve achieved their vision.