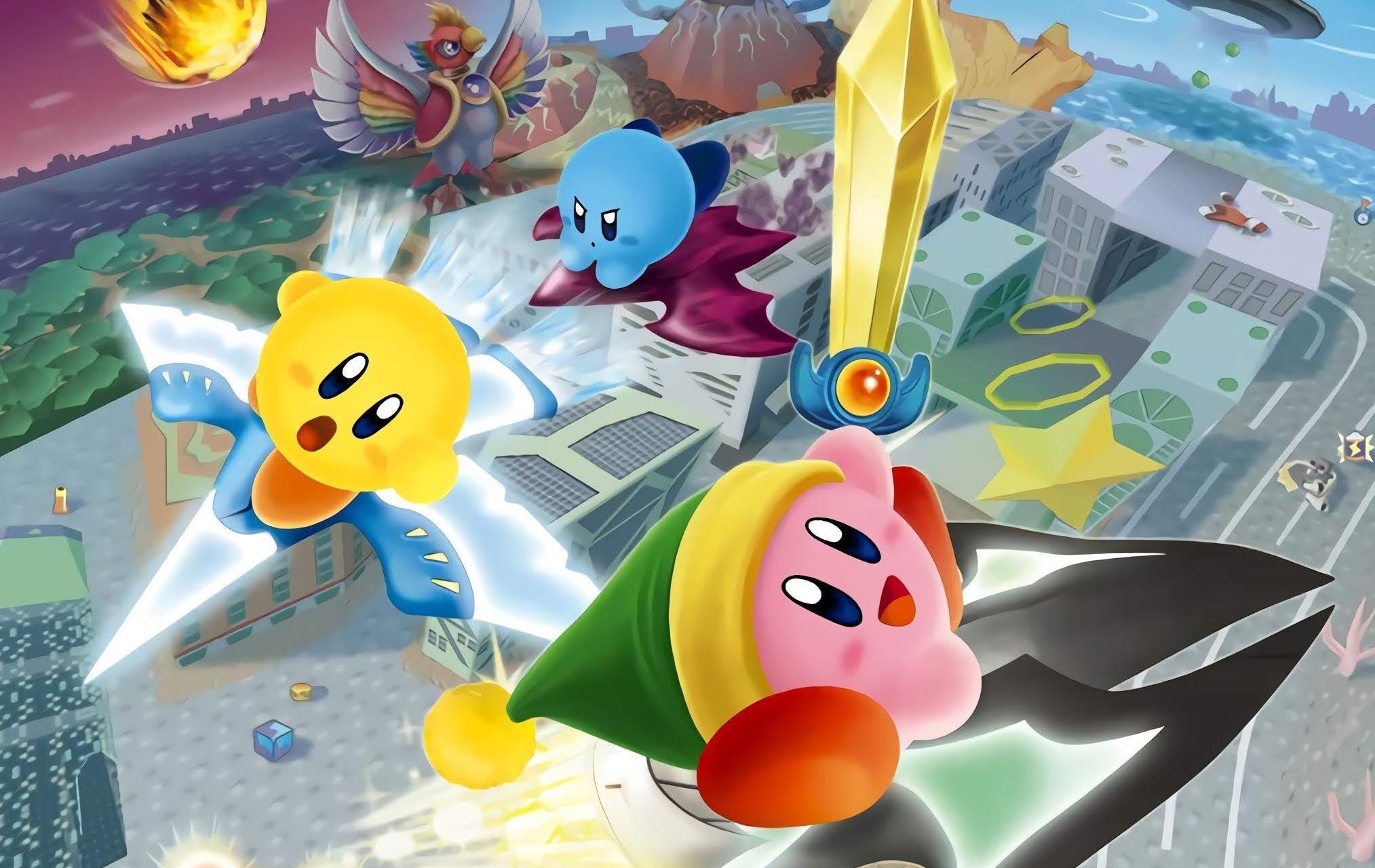 Panned by critics and paraded as a cult classic by fans, Kirby Air Ride upholds what is by far the franchise’s most complicated legacy. Across the internet, Kirby fans will often bring up how the pink puff has gracefully evolved without facing a bad entry. However, Air Ride’s critical reviews seemingly contrast this sentiment as scores for the game from major publications range between mixed and negative. Was series creator Masahiro Sakurai’s final Kirby game a dumbed-down racer or a brilliant gem amongst the multiplayer masses? In retrospect, Kirby Air Ride is secretly one of the most successful games the director helmed. Sakurai’s vision to broaden video game accessibility through the idea of a “one-button game” was masterfully accomplished with Air Ride’s admirable usage of oversimplification.

“For the Kirby series, I wrote the original concept as a “one-button game”. Essentially, the player would use one button to play the game.”

A Top of the Line Ride

During the early 90s, as digital entertainment was rapidly evolving, the days of video games being pick-up-and-play entertainment were being overshadowed by a catering need. More complicated control schemes and intricate designs that resonated with a hardcore audience were becoming the standard. The era of developers focused on utilizing only a joystick, one or two buttons, or even a single consistent game mechanic was changing in the face of rising technical marvels. However, Masahiro Sakurai has always seen a necessity for staying simplistic.

When tasked to create a game for both casual and hardcore audiences by HAL Laboratory, Sakurai initially wanted Kirby’s Dream Land for the Game Boy to be playable with only one of the handheld’s face buttons and the d-pad. However, due to Kirby’s necessity for separate inhale and jump buttons, the creator’s plan did not pan out as a possibility for the final product. As a result of this technical hurdle, Sakurai aimed to create depth for all players within basic game design rather than simplifying controls. As Sakurai tackled other goals, his original plan for a “one-button game” was never forgotten though.

The Kirby series would feature minigames that only required one button to play over the years, but for Sakurai that was not enough. After years of waiting for the right moment, the creator’s vision for a “one-button game” finally came to fruition with Kirby Air Ride. Developed on the most sophisticated Nintendo controller bundled with a console yet, the control scheme for the creator’s final entry in the Kirby franchise before leaving HAL Laboratory was a brilliant work that came with a cost. A simplified experience mangled the media and players as they could not determine whether Kirby Air Ride was for everyone or a niche multiplayer audience.

“When the game says you have to handle all those inputs, beginners may feel overwhelmed. So because of that, I often thought for the first game [Kirby’s Dream Land], “wouldn’t it be great to make a game that only uses one button!” Unfortunately, the game industry does not have the leeway or the capability to permit the sale of such a game.”

In Kirby Air Ride, the A button and triggers are the player’s brake, boost, drift, inhale, and attack, while the analog stick is for directional movement and quick spins. Aside from some minor camera options and the ability to hop off your kart in the game’s City Trial mode, the title quite literally aligns with Masahiro Sakurai’s original vision of being able to play a Kirby game with a single button. There are no options to separate the controller’s layout or turn off commands for select inputs. Every action the player can do is controlled through their choice of either the triggers or the A button.

Looking back on the controller layout, every usable button aside from the analog stick may do the same action, but the setup is also secretly ingenious as perhaps it allows players to decide their own psychological layout. Harkening back to Sakurai’s philosophy of “Kirbyism”, Air Ride’s control scheme practically allows the player to create a custom button mapping that accommodates their reflexes and creates their own sense of control. Oftentimes I find myself only hitting enemies with the A button while breaking and boosting with the triggers — others I have played with who are used to traditional kart racers such as Mario Kart do the same. It’s all one big mind game. From a psychological perspective, the design is rather practical and aligns with our natural sense of reaction.

In terms of actual gameplay, Kirby Air Ride lives and breathes upon the idea of proximity. If an enemy with a copy ability is close to Kirby, he will inhale them. If Kirby has a copy ability, his attack will activate at all times. When Kirby does not have a copy ability, the action button will cause him to break. Holding down a break though will cause the player to charge their boost meter. The longer a player holds down a boost, the faster they will take off, but the slower they will come to a halt. It may sound overwhelming, but the gameplay structure is admirably efficient and keeps the player focused on utilizing the action button at the right time.

So if Kirby Air Ride’s controls and gameplay structure work well enough, why did the game premiere to such divisive scores and reception? Air Ride’s core mechanics and controls work perfectly fine. However, the game’s accessibility and sense of ease are outright problematic. For all of its genius ideas, Air Ride does not properly explain how its gameplay and hoverboard-like machines function. The learning curve of the game is no doubt its greatest unintentional issue.

You Can Only Brake Before You Boost

For the Kirby game with the most straightforward control scheme, Air Ride’s oversight is bafflingly its lack of ability to teach players–which explains the majority of its confused and negative reception. Ironically, the racer is the only Kirby game that cannot be instantly picked up by everyone. Players who get a long first impression of the game and experiment with all three game modes will not immediately grasp how Air Ride plays on a deeper level. A taste of everything the game has to offer is needed. The only indication for players that more is possible can be seen within the game’s massive checklist of over three hundred challenges. Select challenges allude to the fact that the player has not yet learned how to maximize each of the game’s vehicles and their abilities.

Players who look at the time and score checklist challenges for each race and stadium match will quickly realize that they are doing something wrong. On paper, this idea is efficient in teaching players more about the ins and outs of the game. In execution, its landing is only clumsy. For a game that solely focuses on allowing players to teach themselves and find their rhythm, the player is never directed towards the challenges or given the option to experience cohesive tutorials. The game’s opening how-to-play video does describe everything players need to know about the controls. Yet, they never specify important details such as how to keep Kirby’s traction on an exponential rise or how City Trial’s collectibles impact specific vehicles.

Air Ride quickly goes from being that one “dumbed down Kirby racer” to a calculated string of decision-making once players realize the game’s hidden technicalities. Outside of Top Ride, Air Ride and City Trial continually become more complex as the player delves deeper into each mode’s unique mechanics and strategies. While the game may adhere to one basic control scheme, each air ride vehicle is entirely different from one another and requires unique playstyles and reactions. Not every machine will suit every player, but once they find their flow with a single vehicle the game starts to reveal its multitude of impressive technicalities.

Kirby Air Ride never deserved the disregard and negative reception it faced, yet its rise to become a cult classic should have been expected by any fan who explored the game to a deeper extent. While many think Masahiro Sakurai exited Planet Popstar and HAL Laboratory on a low note, he really went out on an exciting high that once again innovated on a genre. The creator’s Kirby journey came full-circle with his successful approach to creating a “one-button game” that still manages to yield the complexities of any other racing title.

Sakurai has always claimed that he left his directorial position at HAL Laboratory because of the pressure the industry placed on him to create sequels. Yet, the Kirby creator’s final effort for the franchise still managed to accomplish what his long-established philosophies set out to do. Kirby Air Ride is no failure; it upholds the pink puff’s standard of staying simple and exerting depth to those who look harder–and perhaps that will always be the brilliant underlying magic of Sakurai’s creations.